Teatro Vivo is always fun, and this evening of two one-act plays is no exception. Both were written by the group's artistic director Rupert Reyes. The opening piece, Two Souls and A Promise, was presented for the first time last August as one of several short pieces. At that time I commented, in part,

"With 2 Souls and A Promise, veteran Rupert Reyes offers us a meditation that starts in whimsy and finishes with reflections on social equality. Young lovers Joe and Lisa cuddle at night on a mountaintop beneath the stars and exchange romantic promises for their souls to search out one another, should they ever be separated. Uh-oh! And yes, when Lisa immediately insists on going alone to get the car, she hits the wrong gear and precipitates it over a cliff, leaving Joe alone in life. We see Lisa as a departing soul, cross-shaped in a choir robe, confused and then really annoyed at this turn of events before she whisks away into the darkness. In the distance, one hears the birth of a child.

"So far, so good, and in line with Reyes’ most recent Petra frolic on the comic machinations of the supernatural. Two scenes follow, echoing dialogue and some movement. In the first, Joe, aged and infirm, is surprised when his son Pablo brings home a new classmate, Lily, with an uncanny resemblance to Joe’s young love Lisa. The comedy arises as son Pablo seeks Dad’s advice on wooing the young lady, who is feeling eerily attracted to the older man.

"The following scene is a variant of the idea that delivers us the aged Joe witha daughter. Again, the offspring unexpectedly brings home a classmate for dinner, and Joe and the visitor feel a strange affinity. Visitor Albert is handsome, deferential and enthusiastic about their shared class in Chicano lit. Only hitch: he is black. Reyes has fun playing Joe’s ill-concealed hostility with the growing awareness of supernatural bonds between them. With this second skit Reyes deepens the piece considerably, moving from a comedy of identities to one of social reconciliation."

The current production is only slightly modified. Reyes has walk-on scenes at the beginning and after the first reincarnation, in which he poses as a writer scribbling variations on a story -- a hint to those in the audience who might get confused by the double run-through of the reincarnation idea. Mateo Barrera is again cast as Joe and displays fine timing. For some reason this time I found him more convincing in the opening scene as the adolescent Joe, yet he still plays a convincing older Joe without resorting to makeup or to exaggerated mannerisms. 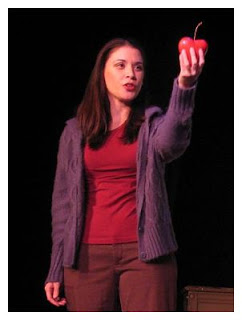 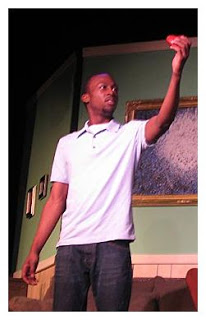 Karinna Pérez, recently in Teatro Vivo's Fantasmaville,plays the young girl throughout, and Jarred Tettey plays Albert the visiting new student. At a key moment in the scene, each picks up the gaudy little heart charm that Joe's vanished girlfriend left to him along with the promise to return. It's an obvious little moment, almost cheesy in its simplicity, and yet it works.

I found that this time through I was again struck by the passage given to Albert. He says that his father was in the military, and he once observed a table of servicemen and their wives from Puerto Rico, in which blacks were married to whites, Latinos and Latinas, representing for him a new idea of equality and cordiality.

The second piece, Crossing the Río, is a skit about policing the U.S.-Mexico border along the newly constructed wall (Reyes' comment: "A brown people not welcome sign if I have ever seen one. We should be ashamed.") He deals with the absurdity of the wall by using it as a setting for slapstick. Reyes himself plays a tough ole Immigration officer, saddled with a brand new recruit who just happens to be his son (Mario Ramírez). The old guy has swallowed the administration's line on the border and he sputters, growls and fumes about the aliens and terrorists menacing American soil -- with the amusing quirk of making those macho Americano remarks mostly in Spanish.

A cheerful young man (Mateo Barrera) pops out of the wall but the old "Migra" officer is in no condition to apprehend him, so the job falls to the probationary officer (Ramírez). It turns out that they're the best of friends already, a fact that puts the new officer in a tight spot -- and even more so with a second arrival, the guy's sister (Karinna Pérez) , because she and the young guy are already sweet on one another. Gangsters have made threats, and the brother and sister don't dare try the regular crossing points. 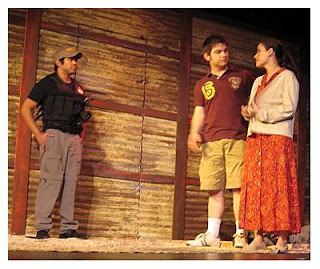 There's amusing debate and further slapstick, especially when Reyes gets back into the scene, and eventually the young officer has to make an early career decision.

Some of the initial comedy between Karinna Pérez and Mario Ramírez comes as she is searching for vocabulary in English -- though many of her later utterances are much more colloquial, sophisticated and grammatically correct. But we can cut the playwright some slack on this and just enjoy the laughs, instead.

At the end of the piece Reyes comes forward to emphasize the company's respect for those who protect our borders -- ". . . and we're just having a little fun with them."

The piece doesn't pretend to provide any deep analysis of the complexities of nationality, migration or border control, but dwells instead on exaggerated beliefs, bureaucratic missions, and intergenerational incomprehension. And that's material ripe for making comedy. 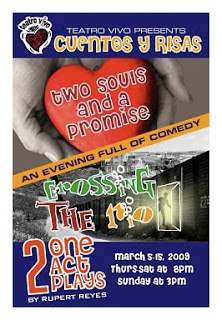