An impressive cast brought San Antonio playwright Antoinette Winstead's Common Ground to the Boyd Vance theatre this past weekend, with the sponsorship of the Pro Arts Collective. LeVan Owens stands tall at the center of the piece, in the character of James Parker, a powerfully built man stiff legged from a rodeo accident long ago. He's a dutiful son enduring a deep, mute resentment.

Winstead sets the piece at a Christmas sometime in the early 70s, starting the action with the unexpected arrival home of younger brother Luke, an Air Force pilot back from Vietnam. Luke's wife Sara Beth and his six-year-old child Veronica have for some undefined period (years?) been living with the boys' mother, "Miss Ruth."

In program notes Winstead says that Common Ground is her attempt at addressing family dysfunction in all its dark and illustrious glory. 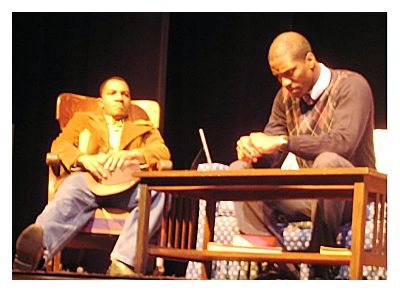 The situation depicted is plausible. The drama arises from tensions between the brothers and the enigmatic position in the family of Luke's wife Sara Beth. Six-year-old Ronnie is a lively and inquisitive child who worships Uncle James and initially distrusts the smooth, smiling stranger said to be her father. And "Miss Ruth," with a mother's sharp eyes and authority works hard to keep comity in the household with the best weapons she has at hand -- cooking, chores for everyone, good-natured grousing, and, when necessary, straight talk.

My concern about the piece is that though it has a quick-step rhythm and plenty of incident, this common ground has little depth. The plot is about two inches deep, like sparse topsoil in the worst farmlands of Texas.

Winstead does not endow her characters with much in the way of history or eloquence. Instead, the rhythm and clashes of Common Ground unwind like those in a television soap opera, in which fascinated spectators watch dramatic collisions between good looking people. For example, the final scene: after the family has fallen apart, "Miss Ruth" giving James a talking-to: "I just don't know what is going to become of you." And James stands there, silent. The lights go down.

James has not learned, or if he has, he is not saying anything about it. LeVan Owens is obliged to stand there and hold his tongue because it's his mama who is talking. One almost expects a pause and then a voice-over saying, "In our last episode. . . "

The script and production would gain greater heft if they gave us more about some themes and questions: 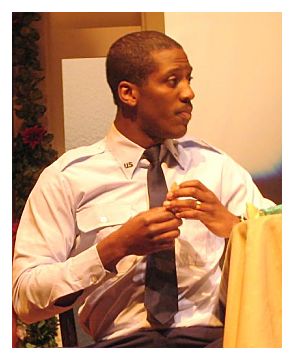 - - What was the story between the Air Force pilot Luke (Aaron Anderson, left) and his wife Sara Beth? Six years is a long time to be apart. We know nothing of their personal history and we learn not much more. Like young Veronica, we have every reason to wonder about the unexpected visitor. Surely four years in the Air Force Academy and two years in 'Nam have given Luke something to talk about; and surely Sara Beth has at the very least some bones to pick with him about his absence from their lives. 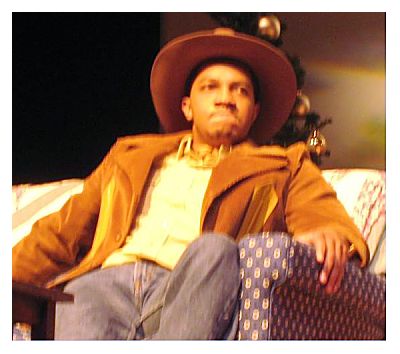 - - Older brother James deals mainly in the present moment. We see his sullen resentment of his smaller, younger, smoother brother but we do not understand it. Okay, some early, pretty clumsy exposition reveals that there was some sort of an accident involving the two brothers, one that ruined James' knee and ended his rodeo career. But that is an incident, not an explanation, and one that in fact is never clearly described. We do not get very much more than that about their past.  From either of them.

- - In similar fashion, we don't gain much insight into Sara Beth. She appears uneasy about her husband's playful embraces, she tries to be a dutiful daughter-in-law, she responds with reluctant passion to a late-night pass at her from older brother James, and she doesn't respond adequately to James' insinuation that Veronica is his own flesh and blood. We see her panic but we don't get a straight story from her on that issue.

These issues present themselves because we care about the characters. James is a man refusing to talk about his past and his feelings, and because we are impressed with LeVan Owens' intensity and the implied danger of his actions, we want to hear from him. The role of younger brother Luke is written to be affable to a fault through much of the action, but we like Aaron Alexander's attitude. 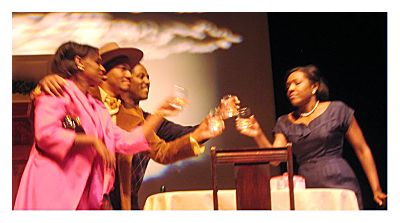 Both younger women in Common Ground are actresses of talent. Robbie Ann Darby as Sara Beth (right) is high-strung and attractive even though unexplained.Vivacious Feliz McDonald (left) plays Rosa Young, the bar owner with a soft spot for James and she does so with flash and happy swagger. The boys' celebration of James' proposal to Rosa turns sour with incomprehensible speed. 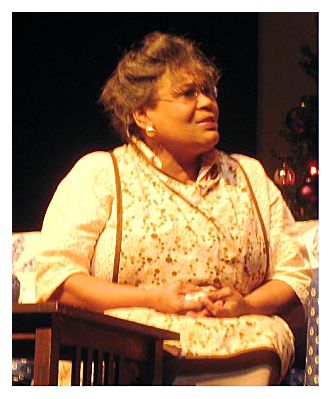 "Miss Ruth," the mother of the family, could be read either as an archetype or as a stereotype of the mama who takes everything upon herself. Selma Pinkard (right) makes the most of the comedy in that role but she does not demean the character. In her affecting interpretation, "Miss Ruth" is a woman of deep emotions beneath that flurry. 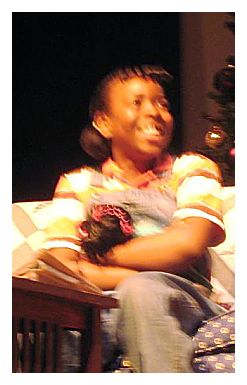 I'd planned to comment on the assurance of the child actor playing the mischievous, tender and ungrammatical child Veronica, and only when reviewing the cast list did I realize there was an explanation for it. Deja Fields is no child at all; he's a working actor, musician and artist who graduated from the University of Houston in 1992. The child character delivers a lot of the humor in the play and is vital in the story line. McDonald was completely convincing in the part.

There's no specific credit for the set design, which was evocative and included some impressively atmospheric rear projection effects. Direction by the much-credentialed Stephen Gerald was smooth and effective -- except for that chair. 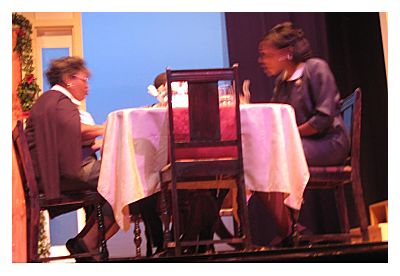 Chairs were set on all sides of the square dining room table near stage center. For those of us in the lowest and closest rows in the stadium seating of the Boyd Vance theatre, that chair downstage, almost always empty, sat there blocking the face of the actor seated behind the table. 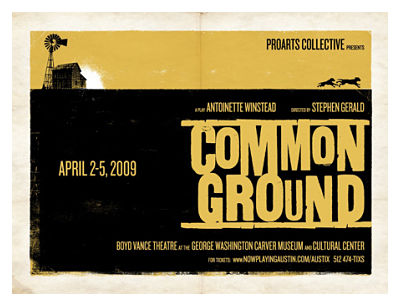