Review: Come Back to the Five and Dime, Jimmy Dean, Jimmy Dean by The Wimberley Players
by Michael Meigs

Reunions are some of the most exquisite torture to which we ordinary folk submit ourselves.  They offer the chance to click the button on the stopwatch of time and to discover how lives have diverged -- or not.  It's the shock of the transformed familiar, perhaps, or it's a moment to flaunt or at least assess ourselves.  One of my classmates assiduously dieted away twenty pounds to present herself renewed at a high school reunion.  And I acknowledge being taken aback by some mercifully long-forgotten adolescent attractions and rivalries.

That may be one reason for the enduring popularity for community theatres of Ed Graczyk's Come Back to the Five and Dime, Jimmy Dean, Jimmy Dean. It uses a twenty-year reunion gathering in the dying town of McCarthy, Texas, to lever out secrets, salve old wounds and create new ones.

Graczyk developed the playscript in Columbus, Ohio, drawing on earlier experiences out in Midland, Texas and around.  The setting is an imaginary crossroads with a 5 & 10 cent store, two hours' bus ride away from Marfa, where the exteriors for the 1956 film Giant were filmed.  James Dean starred in that film, a version of the Edna Ferber novel, and he played a fictionalized version of the extravagant Texas oil wildcatter Glen Herbert McCarthy (hence, Graczyk's name for the locality).  We as audience are awaiting the arrival of various women who as teenagers enthusiastically named themselves the Disciples of James Dean when Dean came to West Texas.

As is characteristic of such gatherings, the fast friends have scattered and generally lost contact, except for three who wound up still in this slowly decaying town where fun is pretty much limited is counting the passing railway cars.  Juanita, the proprietor of the five and dime, took over the management after the death of her husband Clarence, the owner; she's an almost stereotypical small-town Baptist teetotaler.  Blond Sissy was the party girl and wound up back home after her husband left her behind to accept an oilfield job out in the Arab world.  And Mona, president of the Disciples, is a stay-in-McCarthy single mom with an overprotected twenty-year-old boy named "Jimmy Dean." 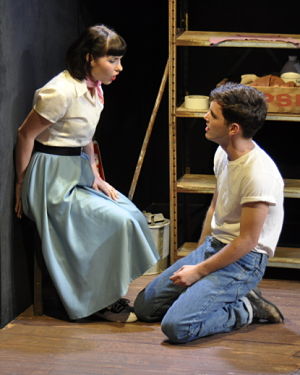 The smalltown set-up and sharply outlined eccentric rural Texas characters are a now-familiar device on the American stage, immediately establishing expectations: surely these are simple folk, left behind by wider American society, objects of indulgent comedy.  Horton Foote worked these fields and raised some durable, complex and iconic characters; the trio Jones, Hope and Wooten have made their conjoined career with the Futrell sisters and other laughables from Texas and from the South.

Graczyk's piece is both of this broader tradition and defiant of it.  While there's plenty to smile at -- Sissy's boasting about sneaking into the graveyard to tangle with boyfriends on the overturned tombstones, Juanita's scandalized reaction to the beer brought in for the reunion party, Mona's reverence for the James Dean shrine in one corner of the store and her latest relic from the abandoned tumbled-down movie set -- the playwright also sets out to demolish dreams and remind us of his characters' frustrations and bad choices.

Memories good and bad, accurate or erroneous, haunt the play and the reunion as three additional Disciples make their way onstage.  The scene slips unexpectedly between 1976 and 1956, maybe surprising you the first time because the tell-tale shift in Bill Peeler's lighting plot is too subtle.

Director David Bisett has nicely matched up actresses for three principal characters and their adolescent former selves.  Kortnee McDowell is brassy Sissy, big-boobed and proud of it, and Laura Jean Tomerlin is her earlier self.  Celeste Coburn's the worried long-haired and carelessly coiffed Mona, wrapped still in dreams of her all too brief moments as an extra in the film ("that's me, right behind Elizabeth Taylor's left ear") and a night of love making on the porch of the Reata mansion set, with Leigh Shelton of cute bangs and heart-shaped face as her counterpart.  The women initially take reserved Joanne (Brandi Rose Achley) as an outsider but eventually connect her with their moody classmate Joe (Jarred Tomlinson).  Linked characters share characteristics and appearance, reinforcing the credibility of the time shifts.  One noticeable discrepancy, however, comes with the lovely Monas:  young Mona has a pert, emphatic, thrusting way about her, while older Mona is generally static and staid.  Granted, the years wear on us, but it would have been reassuring to recognize the persistence of that sort of lively moué. 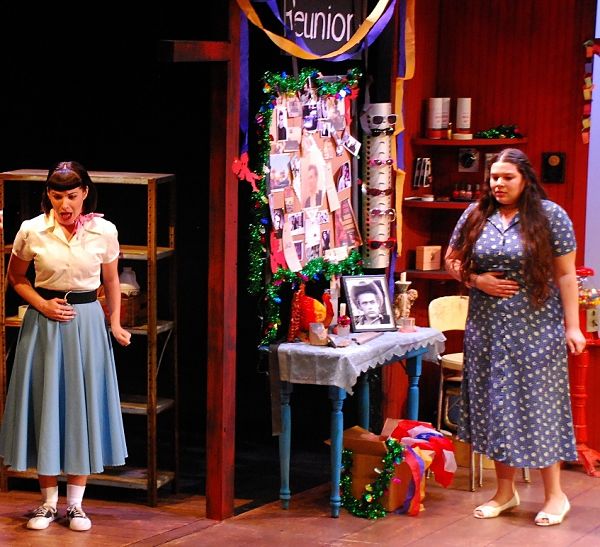 Two of the returnees have no doubles, but since the principle of time shifts has already been established, as secondary figures they really don't need them. Graczyk has written their parts simply to shift focus of dialogue without appreciable change of character.  Tracy Arnold is a wise-cracking delight as childless country club matron Stella Mae. Her direct opposite is Lindsey Burnett as the simple-minded mom Edna Louise, heavily pregnant with her seventh child.  (Mind you, you might have to squint to imagine the two as strict contemporaries, but they're not intimidated by the task).

A word of appreciation, yet again, for the design and the subtlety of this set.  A sand-colored back scrim establishes effortlessly the impression of vast sun-drenched desolation beyond the windows of the Five and Dime, and the interior set by Denice Calley is wide, authentic and entirely practicable.  I greatly appreciated the counter and fountain stools at stage left and the table and chairs in red plastic and aluminum tubing at the center.  Stagings of this work always feature a scrupulously constructed display of James Dean memorabilia, and the Players can be proud of theirs, at stage right.  Costuming by Kathy Maldonado is comfortable and correct;  I liked the saddle shoes from 1956, even though they'd probably have been in leather instead of canvas back then.

These women can be raucous and rough-talking, in either era.  Come Back to the Five & Dime turns an ironic and often unfriendly eye upon sex, whether the luminous desires of the young or the bitter accommodations of their older avatars.  All but one of these characters has a secret that gets revealed in the course of the evening, ranging from the scandalous (at least, for 1976) to the deluded to the bizarre to the disappointed.  Only sweet simple pregnant Eda Mae has survived growing up sexually without being damaged.  That may have been the lesson: embrace sexuality and apply it to the creation of family or else resign ourselves to the absurdities and desperate secrets of that basic human yearning.

New York critics didn't care much for the play, deriding it as formulaic and exploitative, but cinema genius Robert Altman purchased the rights and turned it into a 1982 film that has pretty much slipped from sight.  But the play Come Back to the Five & Dime, Jimmy Dean, Jimmy Dean still speaks to us, even those who haven't a clue about the brooding power of the doomed James Dean.

Popular culture moves on, and probably the most vivid images in American imagination of that West Texas region are now the empty landscapes of the film of Cormac McCarthy's novel No Country for Old Men.  Academy award winner Javier Bardem, however powerful in portraying the psychotic killer in that story, is a poor substitute for the moody mythos of Dean. Especially here in Central Texas -- after all, Marfa's only 400 miles from the Wimberley/Austin region.  And lots of us have migrated here from distant small towns that are dying in our imaginations.

Come Back to the Five and Dime, Jimmy Dean, Jimmy Dean
by Ed Graczyk
Wimberley Players