Bright, funny and engaging, the Zach Theatre production of Charlotte's Web is a delight, not only for the young and their parents but also for all those who had the good fortune either to read the E.B. White classic or to have it read to them. White's story, so simple and gentle, offers some comedy, a fine tale of friendship, and an ever-so-gentle brush up against the question of mortality. Fun and yet subtly educational for all ages, this happy theatrical version now playing in the Kleberg Theatre is a gift and a reward in itself.

Playwright Joseph Robinette consulted White while preparing a theatrical version. It was published in 1983, two years before White's death. In 1989 Broadway composer Charles Strouse added musical numbers and churned out a Broadway version. Strouse's version gave the story a glitzy and somewhat hard Broadway sheen. The Zach Theatre production directed by Nat Miller, coordinator of the program of theatre for families, goes back to Robinette's play. Allen Robertson, Zach's frequent musical collaborator, gives the tale a jovial hootenanny spin instead, welcoming the audience into the space with the 'Zuckerman family band.' Robertson appears in plaid shirt and overalls reminscent of his character as one of the Biscuit Brothers. With banter, clowning and great big smiles these musicians make us all feel at home. 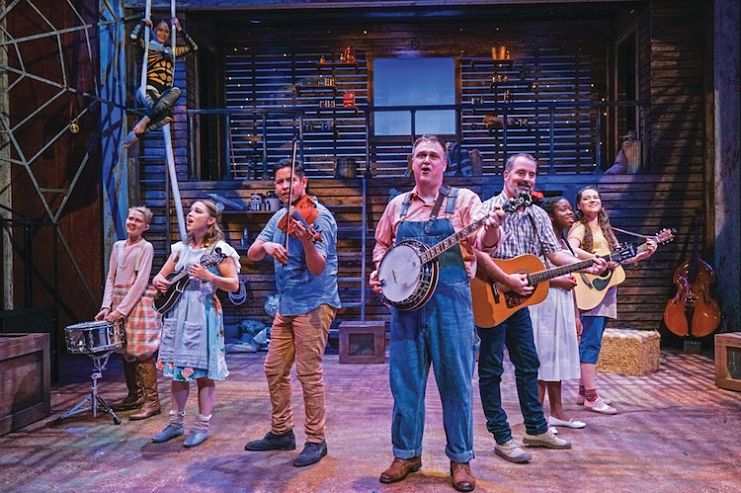 White's story takes place on a farm in Maine, for that's where he was living when he wrote a story intended to set his anthropomorphic farm animals in realistic situations. Zach's version unfolds on a generic farm that could be in Texas or anywhere in the southern United States, and Robertson's compositions and arrangements draw on the folk music traditions of that region.

Wilbur is the runt of the litter, marked for destruction. Young Fern Arable pleads with her father to spare him and her wish is granted. She cares for him as a pet and he flourishes. Fern hopes to prevent the destined cycle of growth, fattening, sale and slaughter. Robinette's dialogue and narration draws directly from White's novel, and we hear the naïve and earnest Wilbur dialogue with the other animals. They become a family of sorts, including a sheep, a goose and gander, and a rat named Templeton. And, of course, a spider named Charlotte. 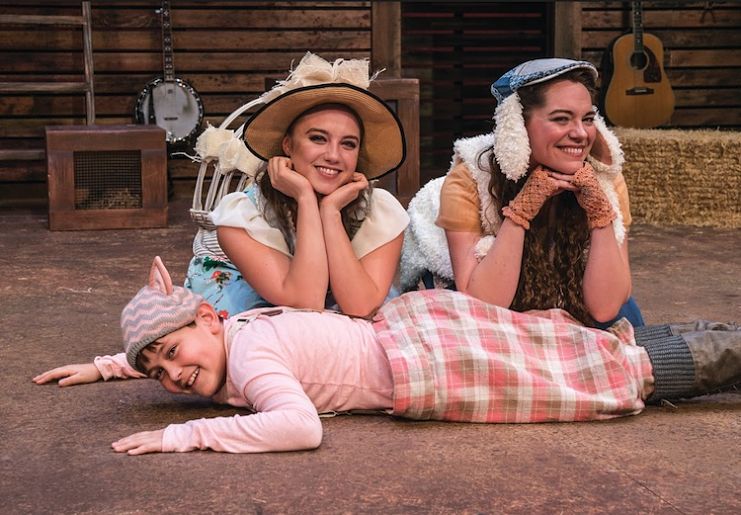 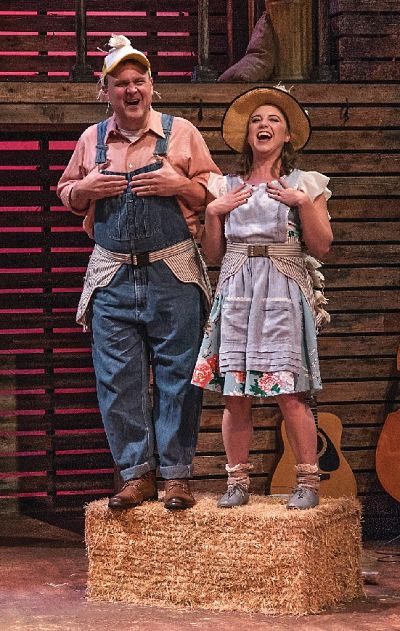 The family band members slip easily into the characters of the story.  Junior members Mariela Denson and Diego Rodriguez become Fern and Wilbur. Deft costume changes signal that transformation. Wilbur wears billowy pink pants and dons a knit cap with pig ears. Robertson is the father in overalls; he later dons headgear and a comic little skirt to become the gander opposite Amanda Clifton as the goose.  Fiddler Joseph Quintana, stationed on the upper level of the set, slips into a full length jacket, and as he descends the ladder with an insolent sway of the butt we see the hanging tail that marks him as Templeton the rat. Amber Quick is Fern's mother Mrs. Arable one moment and the canny, bleating sheep the next. The physical comedy is charming, carried out with a collaborative wink at the audience.

Wilbur is encouraged and eventually shielded by his new friend Charlotte, the spider. Author White gave her the star role in the story, for she is Wilbur's savior -- via the curious expedient of weaving admiring slogans into her web above his pen. SOME PIG causes the simple farm folk to marvel; later arachnid publicity slogans TERRIFIC and RADIANT get Wilbur a place in the competition at the country fair, and her final HUMBLE garners him not first prize but something better: a bronze medal and a permanent place to enjoy the full span of his natural life. 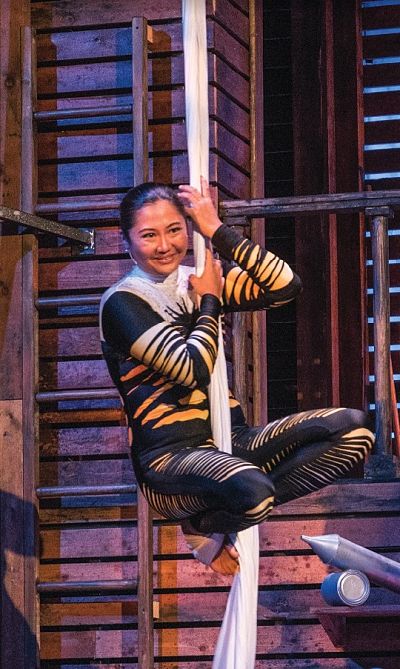 Charlotte's a spinner of webs; for that role director Miller recruited the strong and supple Winnie Hsia, an aerialist. It's a great pleasure to see Hsia grasp the long hanging lengths of white material, ascend them and slip through surprising twists and aerial calsthenics. Each time her deft acrobatics called forth spontaneous applause, especially from the children in the audience. Hsia gives Charlotte a sweet calm and patience, perfectly appropriate for the role.

Charlotte's strategy saves Wilbur from the axe but as the fair ends she has produced her eggs and is ebbing fast. Wilbur doesn't understand; for a time he's frantic. Then Charlotte's children emerge, tiny spots of light that speak with a version of her voice.

Nothing lasts forever but everything continues. 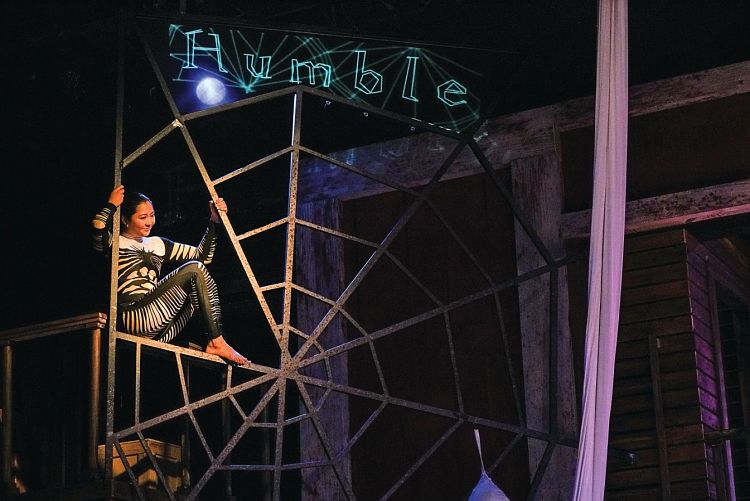 On the Kleberg stage at Zach Theatre.

Public performances of Charlotte’s Web are Friday, October 14 at 6:30 p.m., select Saturdays at 11 a.m. and 2 p.m., and select Sundays at 2 p.m. This show is appropriate for children ages 3 and older. The run time is approximately one hour and ten minutes.

Tickets to Charlotte’s Web start at $15 for youth and $20 for adults and are available online at www.zachtheatre.org, by phone at 512-476-0541 x1, or in person at the ZACH Theatre Box Office, in the Topfer Theatre, 202 South Lamar Blvd. (corner of Riverside Drive and South Lamar Blvd.) Monday through Saturday, noon – 7 p.m.  ZACH Theatre is wheelchair accessible.  Discounts are available for groups of 8 or more.  ZACH Theatre Family Series season ticket holders get the best seats at the best price all season long.  For Family Series Subscription information call ZACH’s Box Office.