If you've ever had the fleeting wish that Disney's Cinderella wasn't so dated and unreal, here's your remedy. The story of the valiant but terribly neglected stepdaughter dates back to Italian folktales and was retold in French by Charles Perrault and later in German by the Brothers Grimm. Now we have here in Austin a charming bilingual version, Spanish and English, that's the collaboration of talents from three Austin theatre companies or more.

The Zach education program run by Nat Miller commissioned imaginative puppeteer Caroline Reck of Trouble Puppet and Glass Half Full Theatre Company to direct and to co-author the bilingual version with Ruper Reyes of Teatro Vivo. It's a solo turn for Gricelda Silva as Belinda, a ten-year-old stepchild obliged to spend almost of all her time in a dark basement while stepmother and stepsisters are aflutter about their reception for the renowned (and very real) Latino author and poet Gary Soto.

Silva's immediately recognizable for her energy, elfin size and enormous,expressive eyes. She's a Trouble Puppeteer but also an accomplished and eye-catching actress on her own. She's a regular with the Pollyanna Theatre, resident at the Rollins Theatre.  I first saw her in Tongue and Groove Theatre's The Red Balloon, for which she collected a B. Iden Payne award. She's appeared at the Vortex, with Breaking String, at the Salvage Vanguard and elsewhere, winning at least one additional Payne award along the way. 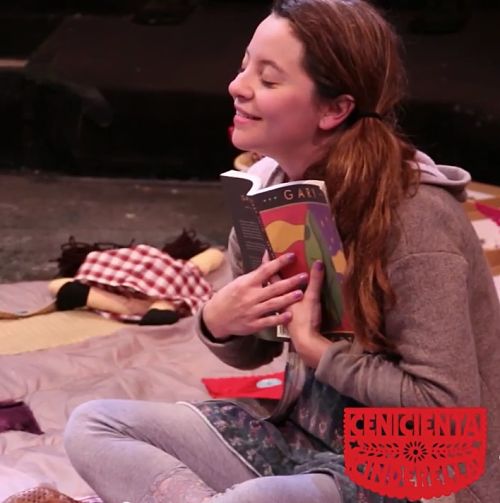 Performing for young children is no picnic, for they'll let you know immediately if they're losing interest. Cenicienta run less than an hour, and Silva kept a Saturday morning audience spellbound virtually every second.

She's solo but she's not alone. With the happy magic of object puppetry and the play of imagination, Belinda animates objects in the dreary basement so convincingly designed by David Molina Garza. In the opening instants of the play, enveloped in a sleeping bag, Silva suddenly turns it into a big bumping caterpillar. A pair of gooseneck lamps transform into a pair of chatty commentators; dressmaking forms and old clothes become her elegant vanished parents.  She recites a simple, vivid poem to each of them, although she's regularly interrupted by the nagging offstage voices of stepmother and stepsisters. 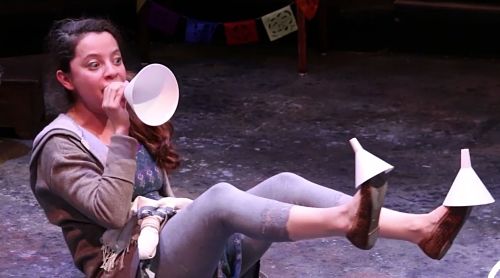 The actor retells the story of Cenicienta -- Cinderella -- by converting ordinary objects into figures in the action.  Funnels represent stepmother and stepsisters; Cenicienta is a simple napkin and her glass napkin ring becomes the slipper; Silva mimes the handsome prince with the help of a large magnifying glass on a stand.  Part of the fun is seeing what the artists' imaginations will discover. She tries out several objects for the fairy godmother, including a feather duster, before settling on her choice, which is remarkably convincing in its action. 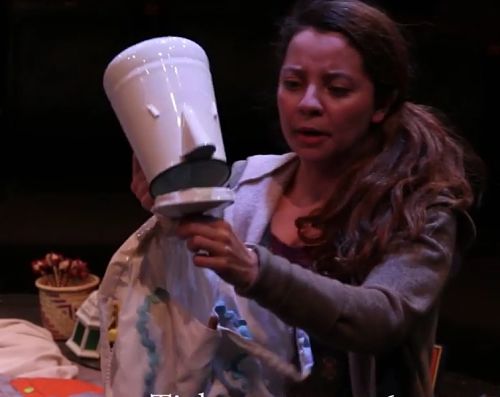 Children enjoy and recognize the Cinderella story in puppet form, and the over-story, that of the neglected Belinda with her love of language, arrives at an equally positive resolution.

The Cenicienta script is crafted in familiar and appreciated Teatro Vivo style, principally in English but with liberal use of Spanish, all applied so that the story remains clear even to children monolingual in either language.

The play doesn't end there, however. Immediately after accepting enthusiastic applause, she engages the children all around her in the Whisenhunt theatre-in-the-round, asking them for their reactions and comments. She listens attentively, plays the crowd, lightly reinforces the themes and responds with smiles. She even gracefully fielded an inquiry from one young girl who wanted to know just how old she really was.  And afterward, out in the lobby, she was surrounded by an admiring throng of persons even tinier than she is.

Cenicienta plays to school audiences during the week. Tickets are available to the public for performances on Saturdays at 11 a.m. and 2 p.m. through May 23; it will be presented on Sunday, May 3, at 2 p.m. and 4:30 p.m.

Special events in celebration of Cenicienta include:·       ·      Celebration of the Con Mi Madre Essay Competition winners: April 18, 2015 at 6:30 p.m.o   Con Mi Madre students are participating in an essay competition exploring the idea of empowering yourself through your culture. Five finalists will be honored with their mothers, and two scholarship winners will be announced at this performance.·      Sensory Friendly Performance on May 17, 2015 at 2 p.m.o   ZACH Theatre’s Sensory Friendly performances are tailored to individuals on the autism spectrum and their families. These performances feature modified sound volumes and lighting levels, the use of glow sticks to indicate sources of sound, movement, or light. All seating will be general admission to accommodate individual family needs. Each family will have more space to spread out in the theatre before, during, and after the performance. Families will be allowed to come and go as needed during the performance and we will provide quiet space in the lobby. Staff will be on hand to help with any of our guests’ needs.Tickets to Cenicienta start at $12 for children and $15 for adults, and are available online, by phone at 512-476-0541 ext. 1, or in person at the ZACH Theatre Box Office, in the Topfer Theatre, 202 South Lamar Blvd. (corner of Riverside Drive and South Lamar Blvd.) Monday through Saturday, noon – 7 p.m. 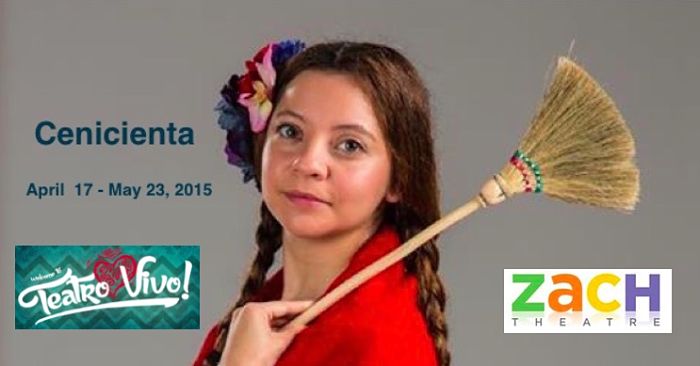