Maybe a playwright shouldn't act in his own play.  Unless, of course, he's one of those comedy yuksters who speaks directly to the audience and makes smartass observations about his own life exeriences and surroundings.

Trey Deason, the playwright, plays the lead character in Cardigan, a piece expanded from a well-received 2010 Short Fringe offering.  His assumption of that identity may be disconcerting to those who have run into him in so-called real life.

Deason is reticent, polite and quiet almost to a fault, at least with those whom he doesn't know well.  As Edgar Cardigan, writer, arriving to lecture to us for a class in creative writing, he's emphatic, dismissive, vulgar and as hopped-up as if he were on speed.  One is tempted to suppose that this is a portrait of Deason's Evil Twin, a sort of exercise in personal psychodrama.  The writer is writing about a writer who is quickly revealed as a compulsive fabricator, and most of what follows is demonstration both of misogyny and misanthropy.

Perhaps director Rudy Ramirez shouldn't have allowed Cardigan to have have snarled so quickly and viciously at Angelia Davis, the actress planted in the audience to play the student.  Perhaps Deason should have done breathing exercises so that his character would be less twitchy at the start.  Or perhaps just have entrusted the role to another actor.

Though the setting is announced as a creative writing class, Cardigan (" . . . like the sweater, ha, ha, ha. . . ")turns it into a staged-drama/improv session using an assistant (Laua Ray) and a forthright young woman (Jennifer Coy) who appears from nowhere.  Are we in a classroom or in a fantasy world?  The setting is inconsistent, probably intended as ironic, but ultimately unsatisfying. 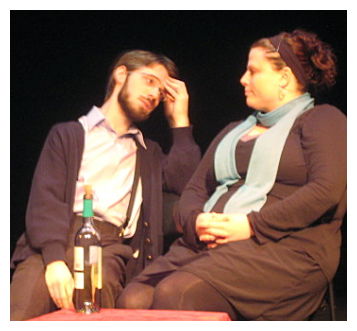 Cardigan entices Coy the waitress to his apartment late at night and after some reprehensible self-representation he tells an involved story about an actress.  That young blondie played a character in one of his plays and sought him out to suggest revisions.  For that story-within-a-story-within-a-framing-device Ray as the assistant doesn't want to play out the sex scene between the two, so they resort to playing with unclothed Ken-and-Barbie dolls.  That's a funny moment visually, but it encapsulates the problems with the play.  It's the trivialization of a relationship and shows the writer's hungry fantasy running up against unfriendly reality: the real woman who refuses to flex to the demands of the writer-voyeur, especially not as a low-paid subordinate.

Jen Coy is always a strong personality on stage.  She's believable and vulnerable within this character, and she piles up sympathy chips from us to the point that Deason as Cardigan is playing a very short hand.  His hysteria subsides as he loses, and Deason's portrayal in the later scenes is more believable. 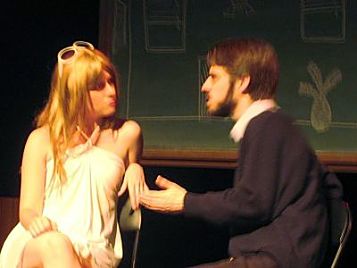 Eventually, it appears, our actress-assistants take over the story line, pushing Cardigan into a limbo.  Laura Ray shows her versatility in the secondary roles assumed by the assistant, ranging from that breathily sincere actress to a real macho pig of a high schooler.  Deason in his Cardigan persona turns the tables a time or two, but he winds up as the empty victim of his own compulsive fantasizing -- maybe already dead, maybe just exhausted from an overambitious lesson plan.

Deason is an actor, singer and writer of considerable accomplishment.  ALT included his original script of Human Sketches at the Sam Bass Theatre for the 2009 "Applause" awards. That piece -- and to a lesser extent, this one -- demonstrate his fluidity in composing dialogue and his facility of invention.

In Cardigan the actor-writer gets stuck in the basin as the dark water gurgles away, and we have the unpleasant experience of watching him turn round just before he disappears down the drain.  Both as writer and actor, he can do better than this.

Click to view program sheet of Cardigan by Trey Deason 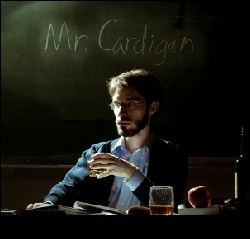