This is a relatively simple application of basic physics. External pressure applied to a volatile gas speeds combustion, renders it violent and maximizes heat.  That's one of the principles that runs your automobile with its internal combusion engine.

Schneider shrinks the focus within the wide proscenium by masking the wings with black curtains, and sharply narrowing the playing space to a nearly claustrophobic kitchen set.

He has cast the three roles for maximum credibility. There's not a breath of comedy or of exaggeration here. Two men and a women are linked by a failing business in a failing small town. They constitute a triangle. . . in geometry the most stable of figures but in human relations potentially the most volatile. 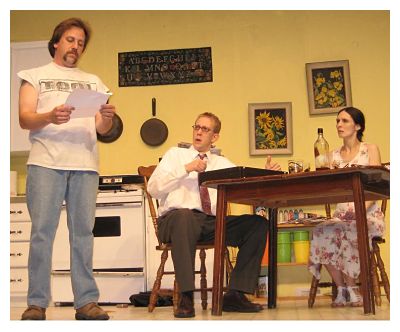 Childless couple Stu and Angela took out a stiff loan last year in order to purchase a convenience store. They managed to scrape up interest payments for ten months but now they've fallen 60 days in arrears. The IRS is after them for unpaid employment taxes. The president of the local bank has decided to pull the plug, and he has sent Frank, their loan officer, to deliver the news.

It's a jumpy, fidgety early morning interview. Stu and Angela are carping at one another. As Frank tries to spread out papework, Stu keeps trying to change the subject to his next greatest idea, purchasing land to set up an RV park.

Straight-laced Frank may be a bank flunky but he's also a city councilman. He's repelled by the notion of lowering property values and inviting in riffraff. Stu argues, refuses to listen to bad news about the loan and abruptly departs to open the store, leaving Frank and Angela alone in the house. There's a pause and then an unexpected modulation in the attitudes of the two, one that takes us deep into their past histories and their emotions.

All three of these characters are at the ends of their ropes. In the course of the two acts we spend with them, we begin to realize just how far each of them has to fall.

Randy Wachtel as Stu is a hustler without anyone to hustle, a man ready to risk anything. Unkempt, dark haired, muscled and moustached, he's both vulnerable and menacing, laced with adrenalin and desperation. Todd Allen Martin as loan officer Frank is an emissary from a more pedestrian world, a rules follower with a wife and two kids, uncomfortably toadying to the president of the bank and acutely ill at ease when the numbers from a loan portfolio turn into life-and-death reality. 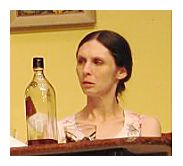 Christy Smith is a revelation. As the action advances, as Angela she is by turns shrewish and then coquette, adoring and then dismayed, alluring and aglow, then eventually despairing and terrified. Her emotional range is breath taking. She acts with conviction and credibility that seize the heart. 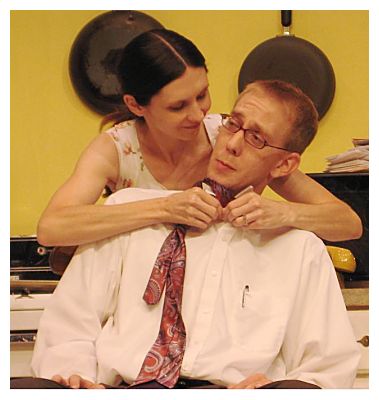 Boom Town is a tough story with sharp language that at times becomes coarse or brutal. Stu, Frank and Angela are locked together like gladiators. I went with my daughter to see it. She's a worldwise woman now in graduate school, and there were times in the second act so intense that she was just about ready to hit the floor to stay clear of expected consequences. We shared that fascinated anxiety you get when you know that something very, very bad is about to happen but you just can't guess what it will be. You want to look away, but you can't.

Such rhythm and intensity are based in the script but they must be realized by the collaboration of a gifted cast and a perceptive director. Gaslight Baker has both, as well as the courage to program a production of depth and bite. Hats off to them for Boom Town.  Highly recommended. 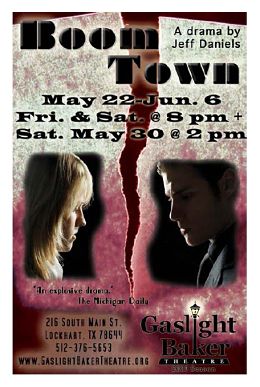