Different Stages is mounting Joseph Kesselring’s Arsenic and Old Lace at the Vortex Theatre in East Austin from November 22nd to December 14th. It is something of a comedy standard and comes highly recommended.

As Director Blumensaadt stated during his curtain speech, Arsenic and Old Lace is from the 1940s, produced on Broadway in 1941. It is also listed as a comedy classic, and that it certainly is, a period piece with sharp dialogue throughout and humor that remains fresh and undated. This gives the play an evergreen quality, to be enjoyed by audiences of all ages and backgrounds. 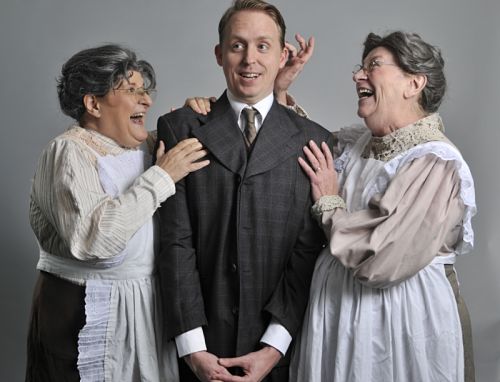 The story of Arsenic and Old Lace is well known, that of two spinster sisters, Abby and Martha Brewster (Jennifer Underwood and Karen Jambon), with a mission to poison their lodgers and all others who meet their exacting criteria. They live in an impressive old multistory home in Brooklyn (set design by Ann Marie Gordon). Their nephews Teddy (Joe Hartman) and Mortimer (Tyler Jones) are co-resident with them.

Teddy is strongly delusional and sees himself as Theodore Roosevelt, but Mortimer is as normal as a newspaper theatre critic can be; he dates the girl next door, Elaine Harper (Sarah Danko). The household is nothing but family secrets, none more chilling than nephew Jonathan (Steven Fay), who shows up suddenly after years of living life as a one-man international crime spree. The spinsters began their career of murder years earlier, using the chemicals left by their father who made a fortune with patent medicines and left his experiments in the house.

This all comes out early in the show, and the balance of the play is a swirling romp about what to do about it. The plot doesn’t twist so much as turn circuitously around and around the sisters. Certain expectations for some of the characters are thoroughly disappointed, and actual outcomes are quite surprising. The play is well-written and well-crafted, as are many plays from the 1940s.

An excellent, talented cast is the prime ingredient of Different Stages' successful production. Austin theatre gems Karen Jambon and Jennifer Underwood create most of the murderous hubbub as the Brewster sisters. They meet the audience’s high expectations, fully inhabiting their characters. Especially enjoyable are their bouncy spinster flits about the stage and fluttery attention to guests throughout the play as they serve sandwiches, wine, and poison. Ms Jambon and Ms Underwood create a delicious dramatic contrast between their grandma-like sweetness and their predatory willingness to send people spinning off this mortal coil. Their performances are must-see, and my hope is that Director Blumensaadt and the Vortex will hold over the play to give the public additional opportunities to enjoy them and the production as a whole.

Longtime Austin theatre fixture Mick D’Arcy enacts two characters; he plays the Rev. Dr. Harper with insane eyes and Lieutenant Rooney with insane voice. Few actors enjoy their work as much as Mr. D’Arcy, and that makes him a joy to watch.

The same can be said for Steven Fay as Jonathan Brewster, the criminal brother who comes home after a life of mayhem. The actor seems to have gotten in touch with some inner spark of evil, and the audience usually recoils while he delivers his lines. I was ashamed of myself for enjoying watching Jonathan intimidate his spinster aunties all around the stage. Perhaps he got in touch with my spark of evil. 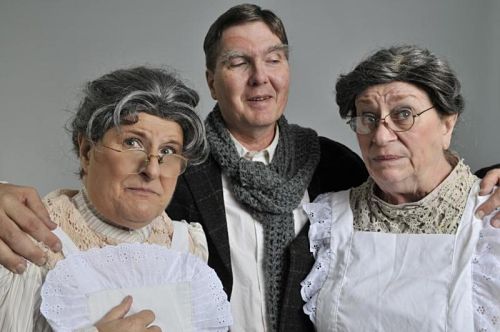 Joe Hartman plays the certifiably insane nephew Teddy Brewster with enthusiasm. Any actor must love a role in which he can announce his entrances with a discordant bugle blast and announce his exits by screaming “Charge!”  Hartman always has the audience's full attention. 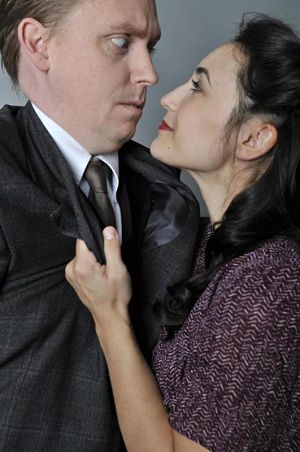 Tyler Jones plays the overwhelmed and desperate Mortimer Brewster in his familiar understated fashion. Sarah Danko, signed on for a fluff role as Elaine Harper, gives full value; no fault of hers: stereotypical ingénue roles are staples of plays of that era.

Relative newcomers to the stage make worthy contributions. Sebastian Garcia, Grayson Little, and Andy Brown play Irish cops and don’t drop their accents for the most part. Porter Gandy plays a suitably alcoholic and mysterious Dr. Einstein, and Mike Dellens puts in stellar performances in two roles as potential victims of the sisters; Mr. Dellens in particular shows high potential in the field of performance.

The Different Stages production of Arsenic and Old Lace is nearly flawless as far as I can tell, marred only by an awkward scene transition near the end of the play; that stumble could have been created by a lighting miscue on the night I attended. Otherwise, the show has the precision and attention to detail for which all of Different Stages’ productions are known. Arsenic and Old Lace plays at the Vortex until December 14th unless the producers respond to my earnest request, above, to extend the run.

For holiday theatergoing, strongest recommendations extend to Arsenic and Old Lace and Steel Magnolias, playing until December 22nd at City Theatre. Austin theatergoers are fortunate to have two plays of such quality and wide appeal playing at once in the holiday season.

Thursdays through Saturdays at 8pm
Sundays at 7pm 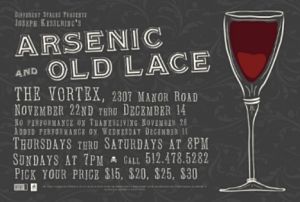