The premise of this neatly crafted production by the community theatre in Lockhart, Texas, only 35 miles from Austin, sets us up for a happy exercise in dramatic irony.

Imagine, say author and cast, that a group of community theatre actors are gathering for a post-production party, and that a noted theatre critic has against his better judgment attended the production. Their four-character show was a musical comedy about undertakers, and opening night was so chaotic that one spectator (uh-oh, the critic) was “gagging with laughter.”

Worse, there are rival opening-night parties, and only 7 guests turn up for this one at Dorothy and Charlie’s house.

So as I sit here working thoughtfully on an assessment of Amateurs, I feel uncomfortably aware of the review of the imaginary play about undertakers written by character/critic Paul Cortland (David Young). Who are we critics, anyway, when a cast and crew have worked for weeks to realize their vision?

We spent Friday evening, September 5, with this group of community actors, who present characters who are a high school teacher, a dry cleaner owner, a secretary and the operator of a Jiffy Printing shop, each of them dedicated to community theatre.

Act One climaxes as they, their spouses and a couple of friends witness the collapse of Cortland, the dandyish critic, and rush to his aid.

At the end of Act Two, one of our aspiring thespians finds Cortland’s review in his abandoned jacket. He reads it out piecewise. The transported spirit of hospitalized critic Cortland (Young, left) appears on the balcony, completing the paragraphs. He shafts cast members individually, dismisses amateur theatre in general, and offers a single, leering bit of praise for the ingenue.

The comic and dramatic irony of Amateurs is encapsulated neatly in the title of the play, which was first produced at the Alley Theatre in Houston in 1984. We English speakers tend to divide practitioners of art and of crafts into “professionals,” those who live from their activity, and “amateurs," who are unpaid. Compensated in many ways, perhaps, but unpaid and therefore of dubious worth. This is the logical divide between Equity actors or Screen Actors Guild actors and their craft companions, on one hand, and the vast universe of wannabes, on the other.

But “amateur” is borrowed from French, as are many expressions for the finer things in life. And in French an amateur is, literally, someone who loves or deeply appreciates an art or activity (contrast that, in passing, to “amant(e),” a “lover” in the romantic or sexual sense).

The characters in Tom Griffin’s play are “amateurs” both in the English and in the French senses. But the cast of 9 actors who incarnate them at the Gaslight Baker theatre are amateurs -- accomplished actors and certainly lovers of the theatre.

Drama and play-making are not diminished when they take place in relatively remote venues. The transformative power of theatre may in fact be more evident and exciting when it occurs in a smaller circle. For example, after the play, Stephen Reynolds, who plays the central role of Charlie, came down into the audience area to greet a friend who had sat four rows behind us. For us, who had spent two hours or so watching him as a distracted, gentle man “with the mind of a kaleidoscope,” Stephen Reynolds was trailing the magic dust of charisma.

Be warned: in his send-up of community play-making, author Griffin happily employs a ventriloquist’s dummy as a symbol and sounding board. An edition of Mortimer Snerd does good service as Horace, endowed by his owner Nathan (David Schneider) with a “buckaroo” voice like that of Andy Devine. 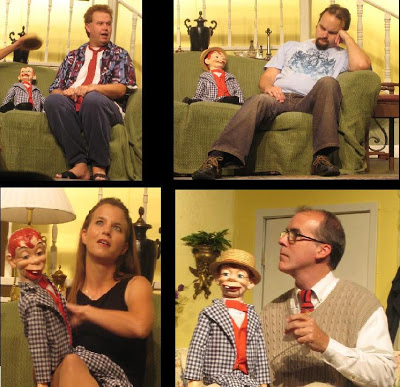 Horace starts with his owner Nathan (Schneider, lower right), a lonely history teacher with zero talent as a ventriloquist. He spends time with Wayne (Ian King, upper right), lead actor in the musical undertaker fiasco; and he sits mute with host Charlie (Reynolds, upper left), half-recognized as a silent guest and half-imagined as the son who died in a random accident years ago. And finally, in wooden embarrassment or perhaps indifference, Horace serves for ingenue Jennifer/“Bubbles” (Mary Roark, lower left) as a stand-in for the Mr. Right who never came along.

In form, Amateurs reminded me of the “well made play” of the 1930s and 1940s, a genre typically performed within a single box set with a limited cast of often stereotypical characters, with a unity of time and ripe occasions for encounters, reverses, and revelations. Many of them were murder mysteries, featuring the calling-together of all for a dénouement similar to the recital in Amateurs of the critic’s till-then-concealed review. In similar fashion, each of the nine characters undergoes an epiphany. The director and cast set a well-judged, accelerating rhythm for each act.

Having given these characters our sympathy and serious attention, we spectators are satisfied and relieved at the result. If only every cast party or community gathering offered such closure!

After all, what better fate for a critic than to be demolished in the middle of a party?

Stephen Reynolds is a standout as Charlie. In the opening minutes I judged him, too hastily, as wooden in his expression, but as we gathered further background we understood that he was fleeing reality. Visibly concealing or defeating feeling is a difficult psychic action to portray, and Reynolds did so convincingly. Dana Peschke as Dorothy his wife provides steady support.

Ian King is the blustering, insecure Wayne, drawing our attention with his immediacy and with an involvement with other characters, demonstrating a fine stage sense. 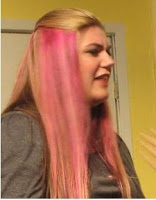 In contrast to Wayne's knots of nerves, Sarah Lee Shroeder is dreamy Mona, the former flame who unexpectedly reappears to see him in his Big Role. Unlike the other characters, she has already reached her own comic nirvana, without the adrenalin of artificial drama. Mona drifts sweetly back to her New Age life, sincerely wishing him well, prompting Wayne to collapse like a punctured balloon. 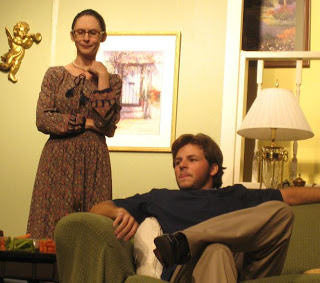 Billy Alexander is Ernie the overexcited dry cleaner, brought lowest by the theatre review, and Christy Smith is Irene his wife – intensely worried but intensely loyal.

Thanks to designer Todd Allen Martin and production staff for the impressive, comfortable set, well decorated with furniture and homey touches. The scale of it was forced by the width of the stage in this performance space; Gaslight Baker would benefit either from a more intimate stage or a larger audience.

My preference would be the latter! 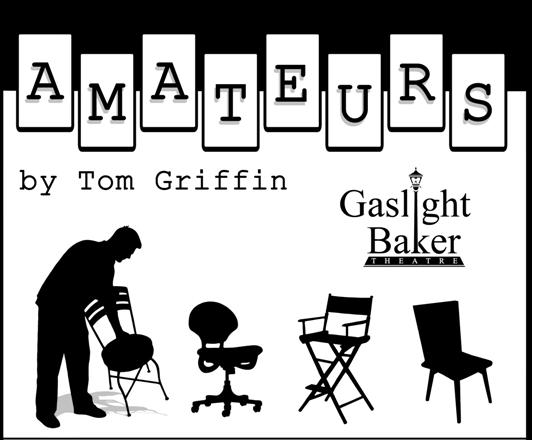