Review: All The Way by Zach Theatre
by Michael Meigs

Let's shout it out right now: Steve Vinovich is an astonishing LBJ impersonator. He resembles our larger-than-life 36th president, but what nails it is his mastery of the man's accent, phrasing and physical gesture. You arrive at the theatre expecting to be entertained by a play about LBJ, and in Vinovich's first three minutes on stage you believe that you are right there with Lyndon. It's an eerie and electrifying experience. 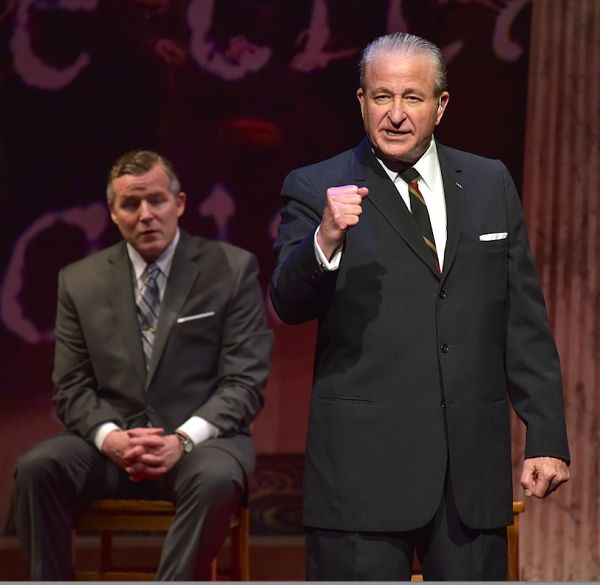 Playwright Robert Shenkkan's All The Way focuses on the challenges of the eleven months between the November 22 assassination that put LBJ into office and the 1964 convention that made him the Democratic nominee. Much assailed the President during that period -- the Zach Theatre hands out a four-page backgrounder to you as you enter the lobby, in the hopes of making it easier for the uninitiated to deal with the huge volume of information about to hit them. Chief of the preoccupations in this narrative is the issue of civil rights, including particularly the negotiation of  the Civil Rights Bill and a compromise at the Democratic Convention to bridge the unbridgeable gap between the all-white Mississippi delegation and the rival integrated Mississippi Free Democratic Party.

These tensions put LBJ squarely in the middle. Entrenched segregationist politicians stand metaphorically to the right: LBJ's mentor Senator Richard Russell of Georgia, Sen. James Eastland of Mississippi, and Governor George Wallace of Alabama as he makes his first snarling run for the presidency. To the left are Rev. Martin Luther King, Jr., Roy Wilkins of the NAACP, the Rev. Ralph Abernathy, Stokely Carmichael of radical Student Non-Violent Coordinating Committee, their white supporters and advisers. LBJ will seduce Senator Hubert Humphrey of Minnesota into managing the bill by dangling the promise of the VP nomination before his nose. While browbeating Hubert, the President will persuade, cajole and strong-arm reluctant senators to resort to a precedent-setting legislative maneuver to get the bill released from committee, a ploy bolstered by LBJ’s seduction by flattery of the egotistical Senator Everett Dirksen of Illinois.

With similarly unflinchingly unscrupulous power squeezes LBJ will blackmail Mississippi’s Eastland by threatening to cut agricultural subsidies and will dragoon Walter Reuther of the AFL-CIO into forcing 'negro' leaders into a compromise at the convention.  Bit parts include Lady Bird, Lurleen Wallace, owner of the Washington Post Katherine Graham, and Coretta Scott King.

Got all that? Now imagine it delivered at a blistering pace in debate and dialogue, with actors slipping in and out of multiple roles with changes of wig or costume. Flashing before the audience are assassinations in Mississippi, a funeral at a rural church interrupted by a fierce rant of resistance, cackling sessions of good-ole-boy conspirators, voting sessions in the Senate, glimpses of a melancholy LBJ in his underwear, references to moments memorably played up in the press of the time, such as the pulling of beagles’ ears.

LBJ was bigger than life, a great man from humble origins, a cynical humorous wonderously effective manipulator who seized the opportunity of the unexpected presidency to achieve great things. Hovering in distant perspective, of course, is the developing war in Vietnam, Banquo’s ghost at the Great Society banquet.

I confess that I haven’t gotten over to the new LBJ Museum exhibition at Red River and Dean Keeton, much to my regret. Schenkkan’s play does a dazzling job of portraying the tensions and high stakes of half a century ago. He zealously portrays the cunning president’s setting of the foundations for societal changes that today we take for granted. Those include, of course, fifty years of southern abandonment of the Democratic Party, a political disaster that persists in our own day.

History’s not art — it’s too complex and messy — and art isn’t history. Just as the film Selma told an important story but badly distorted the personality of President Johnson, All The Way revels in the mythic proportions of LBJ while reducing most of the other roles to fleeting caricatures. Vinovich’s uncanny resemblance to the 36th president isn’t matched by the casting of others, except perhaps for that of Melvin Abston in his emphatic performance as Martin Luther King, Jr.

The cast of characters is huge and Shenkkan sketches most of them with a scribble instead of a brush. I was particularly dismayed by the portrayal of Humphrey as a credulous and easily manipulated fool. Michael Miller does a valiant job in that role but uses an accent that sounds more European than HHH’s own midwestern nasality. 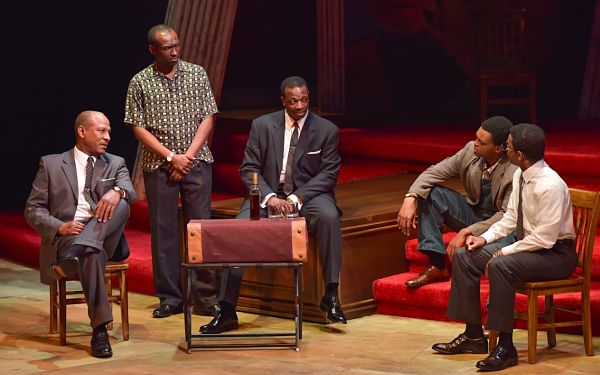 African-American roles are better defined. Although they’re historical figures, they come across as individuals as they debate principles and strategies. William Earl Ray as elder statesman Roy Wilkins of the NAACP is angry but cautious; Richard Romeo as Rev. Abernathy seeks compromises within the movement. J. Quinton Johnson as Stokely Carmichael is angry with a different and hotter flame, and the impatient Delanté G. Keys rouses the house with his call in the church to “stand up!” against murder and oppression. 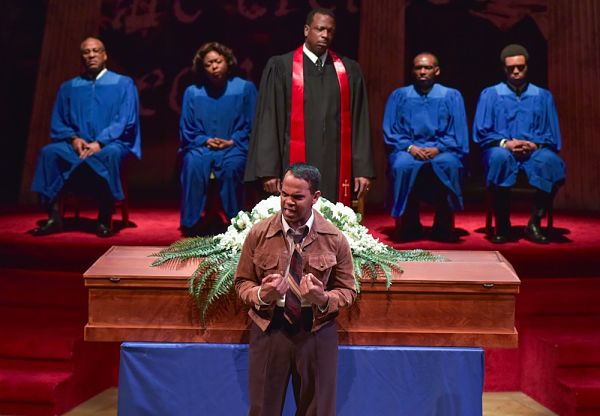 The high-stakes drama is leavened with comic relief, including some of LBJ’s coarse humor. Unfortunately, the idiot clown of the piece is Robert Walden as J. Edgar Hoover, followed around by David Jarrott as his henchman in a bad toupee. Hoover headed the FBI for forty years, and there wasn’t anything funny about him, however odd, homosexual and conspiratorial he may have been. 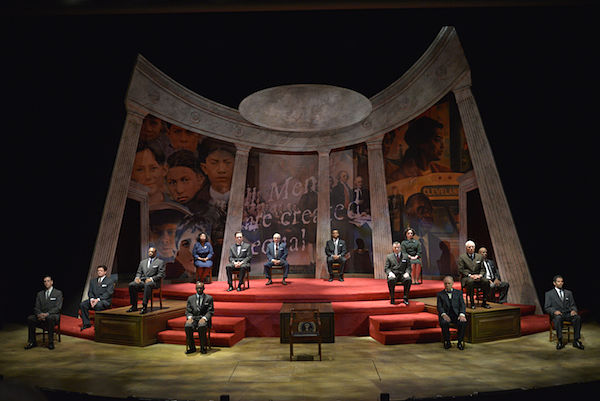 All The Way
by Robert Shenkkan
Zach Theatre