Review: A Matter of Taste by FronteraFest
by Michael Meigs

Playwright Bastion Carboni has some good ideas but he gets in their way. There are five ingenious skits in this Long Fringe entertainment but he has the mistaken impression that an audience will be as interested in the creative process as he is. 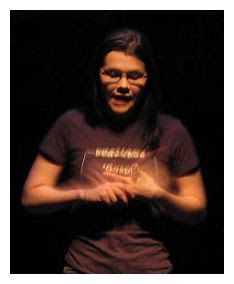 Carboni has actress Jenny Keto preface the evening with a confused, swaggering but finally non-helpful appearance as "the playwright." And at the end of a pretty enertaining evening he brings on the director(?) and others for an egg-timed 3-minute wrap-up with comments. Most insightful of them: "Andrew (Varenhost) acts too tall!"

Let's call those hiccups of the creative process.

More of interest are the five "black-out" pieces.

There's a core here of irreverent, smart alecky writing that delivers a good time on stage. The sketch format doesn't allow much character exposition, so we're provided jagged humor tied to the incongruities of the imagined situations. I'd like to see the playwright go long next time, moving his characters through plot and through change, Why is Marc fixated on escaping commitment? Why is the young woman in his bed willing to play the scene for him? And what happens next?

Interview of Bastion Carboni by Dan Solomon published in The Onion's Austin Decider, January 26, subtitled "Tastes Like Contempt for the Audience"

A Matter of Taste
by Bastion Carboni
FronteraFest 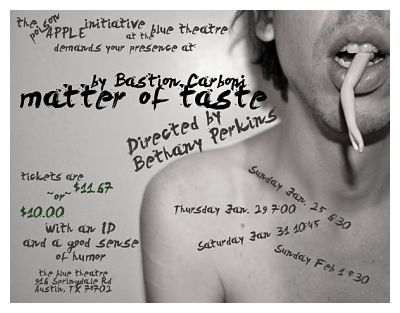