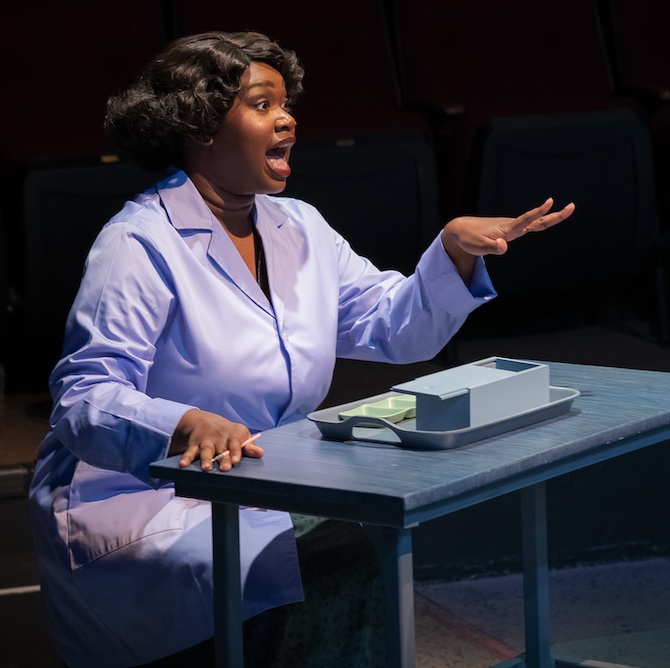 At the heart of These Shining Lives are the remarkable matched performances of Sonia Mariah Fonseca and Christina Hollie as young industrial workers painting luminiscent numbers onto clockfaces at the Radium Dial Company in the 1920's and 1930's.

Lara Toner's choice in casting and directing them was perceptive. Her direction brings them gradually together, a melding of opposites. Fonseca—petite, initially timid, and vulnerable—is Catherine, the lead, with a heartbreaking story arc. A young mother of two, she persuades her steelworker husband to let her work to help support the family. She finds community in the workshop, chatting with three other women as they spend hours every day, through years and years, licking their paintbrushes before dipping them into radium powder.

Hollie as Charlotte, tall and wide, the strong, brash member of that tiny coterie, couldn't be more different from Catharine both physically and in temperament.

The first half of Melanich Marnich's script, written in a series of relatively short scenes, portrays Catherine's flourishing in the new environment. Marnich crafts character quartet scenes with those two and co-workers Pearl (Marie Ritchie) and Frances (Kyndal Rinewalt), one sketched as slightly prudish gossip, the other a collector of what today are dismissed as "dad jokes." Catharine's husband Tom (Tyler Donohue) provides her with steady, anodyne, almost boring support. Equity actor Stephen Mercantel as the women's supervisor Mr. Reed pokes his head in from time for little pep talks. 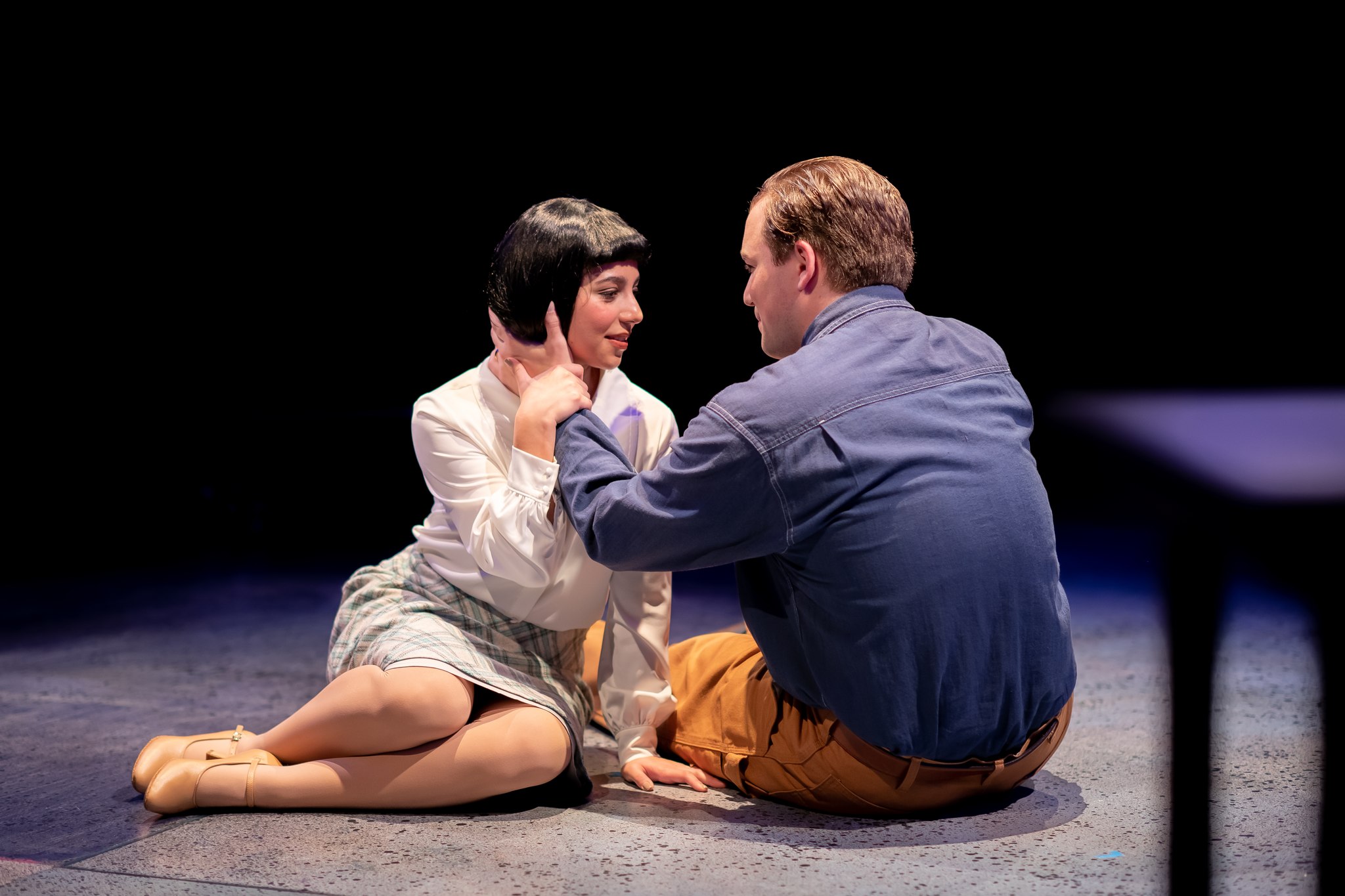 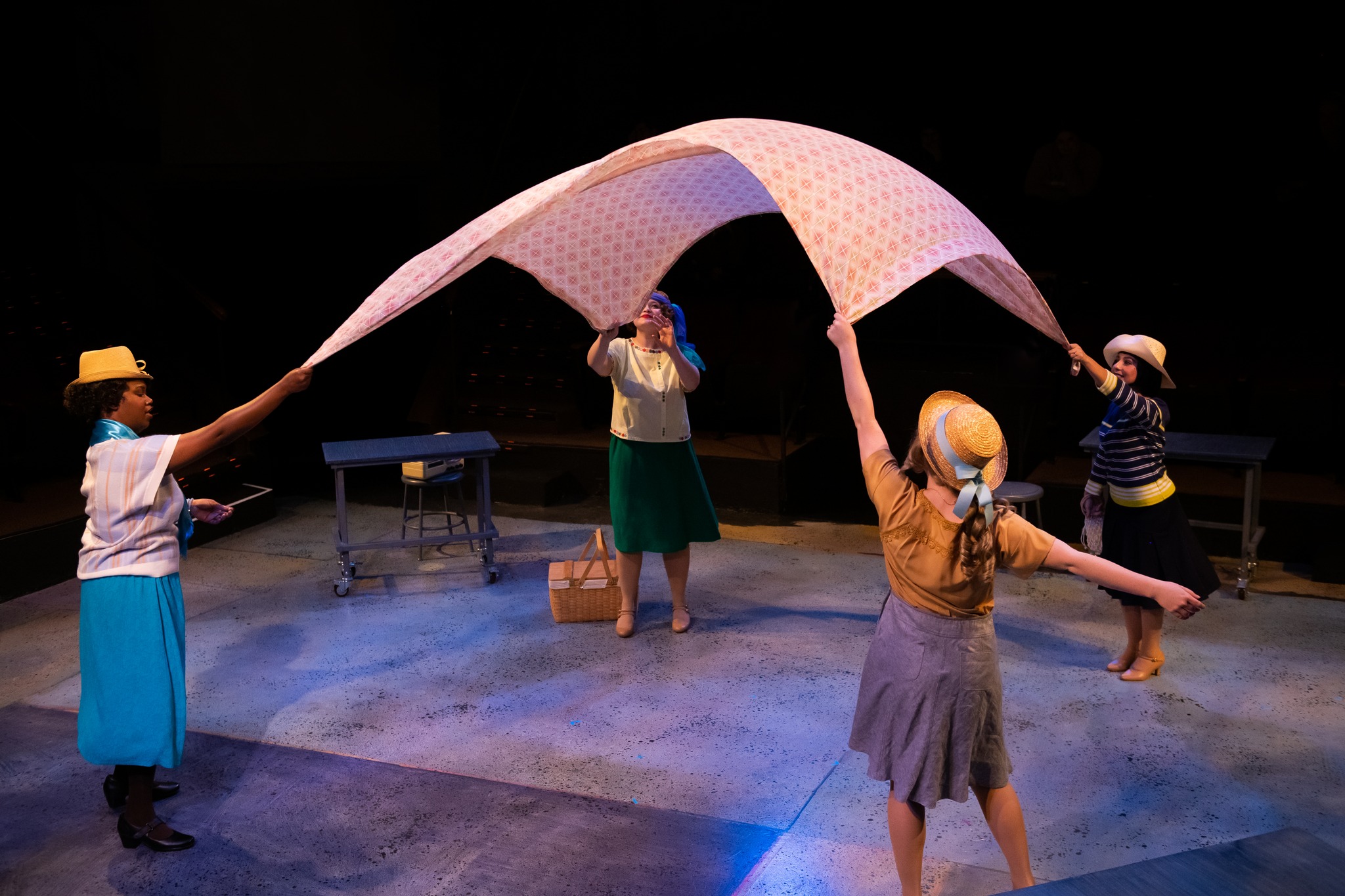 The second half, having established our sympathy for these characters, drains all hope from them with the pernicious effects of radium poisoning. The distress and then the anguish of physical deterioration progress apace, company doctors played by Luis Arrellano wave away complaints and prescribe aspirin, an honest physician (also Arrellano) gives them an honest, fatal diagnosis. Under afflictions, strong Charlotte's brashness fades as she finally acknowledges her pains. An aggressive attorney challenges them to sue; Catharine, wan, weakened, and intimidated, rises to the challenge and agrees to become the plaintiff despite social opprobrium. The inevitable outcome of this death foretold is recounted by all as if by a Greek chorus.

Mercantel shows us his acting chops, portraying both Reed as a sweet-tempered, painfully paternalistic boss and Leonard Rosenthal the brutally frank, go-for-the-jugular lawyer who takes on Catharine's case pro bono. Mercantel does it with a quick switch of costume backstage, the doffing of a hairpiece, a pair of wire spectacles—and a shift of attitude and delivery so remarkable that one doesn't realize the same actor inhabits these characters. 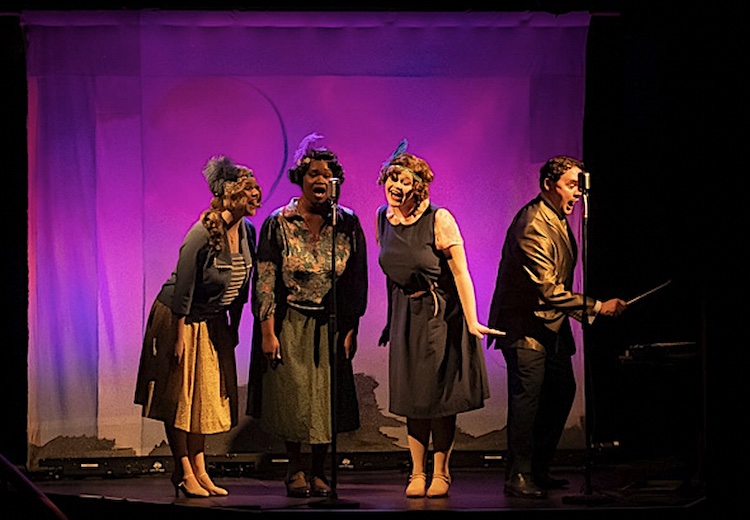 Playwright Marnich structured the work so that it could be represented by a cast of only six actors, and that's the approach here. It works, most of the time, although it's a bit odd to see three of the women workers pop up as radio singers, streetwise journalists, narrators, and in one case, even as Catherine's daughter. The St. Edward's theatre program could have easily dispensed with the doubling and tripling of roles.

Staging in the Mary Moody Northen Theatre is bare bones, principally a set of chairs and wheeled metal tables quickly reconfigured to the needs of the scene. Except for one platform for the radio show skit, the upper reaches of this theatre-in-the-square are masked. 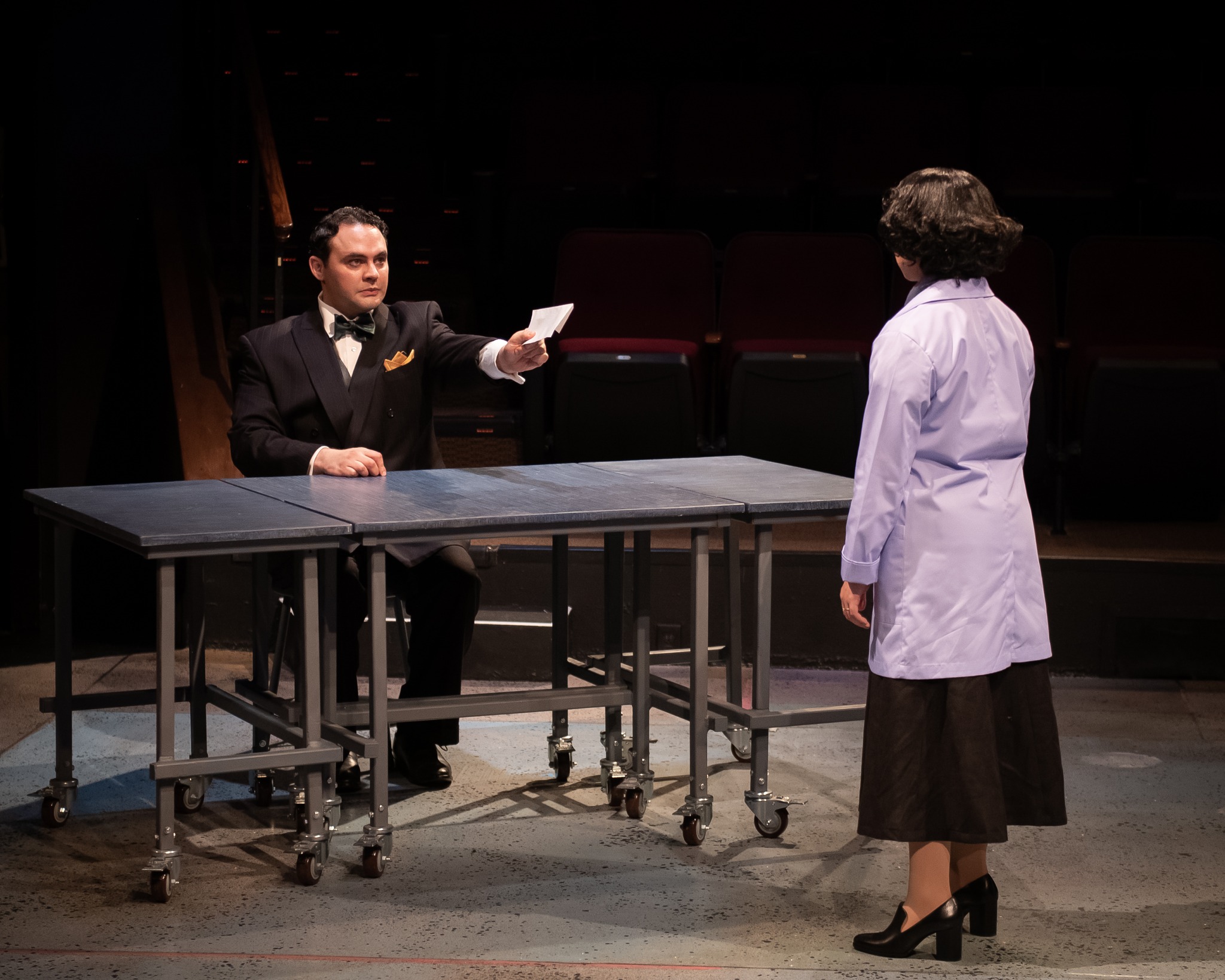 The attraction of such flexible casting, minimal sets, and themes dubbed as "beautifully tragic" by one reviewer have made the work a staple of community theatres. In fact, in February and March of 2020 These Shining Lives was the last production of San Antonio's Vexler Theatre before that institution succumbed, due in large part to the COVID shutdown.

Marnich's 2008 play essentially broke the story of radium poisoning for contemporary audiences. In 1999 the book Deadly Glow: The Radium Dial Worker Tragedy by Ross Mulner, published by the American Public Health Association, had portrayed the events documented to have caused "a few hundred deaths." The 2002 review of that book by Warren Winklestein, Jr., published in The American Journal of Epidemiology, summarized the story, the history of radium usage, scientific confirmation of the potentially fatal effects of radium poisoning, and victims' largely unsuccessful efforts to obtain compensation. Winklestein noted, "The denial of culpability by the radium dial industry presaged the tactics and strategies of the tobacco industry in denying the adverse effects of cigarette smoking."

That comparison was relevant both then and now. A 1998 settlement between tobacco companies and 46 state attorneys general obliged the companies to pay annual compensation forever to the states for public health effects of smoking. In 2019 the settlement formula resulted in payments of nine billion U.S. dollars.

The director, cast, and tech staff of the Mary Moody Northen Theatre deliver a sincere, open-hearted performance of a script that concentrates exclusively upon harm caused initially by ignorance and subsequently by willful ignorance. As a result of these events, radium dials disappeared and other phosphorences were employed. Unlike the scandals of the Triangle Shirtwaist fire that led to factory regulation and Upton Sinclair's novel The Jungle about the Chicago slaughterhouses that led to agricultural inspection, the management of this company and others using poisonous radium mostly avoided consequences of their actions.

Marnich's script isn't a tragedy, for she presents only victims. There is no tragic flaw; Catherine is entirely innocent. Even supervisor Mr. Reed ("I'm just doing my job!") appears sincerely anguished that he's forced to fire Catherine for the absences caused directly by her employment. We could have used someone to hate in this cast of characters, a face personifying the indifference and exploitation implicitly indicted in the closing narration.

After all, the company's owners and management appealed the verdict of damages six times and finally lost before the U.S. Supreme Court only a month before Catherine, the plaintiff, died of radium poisoning. 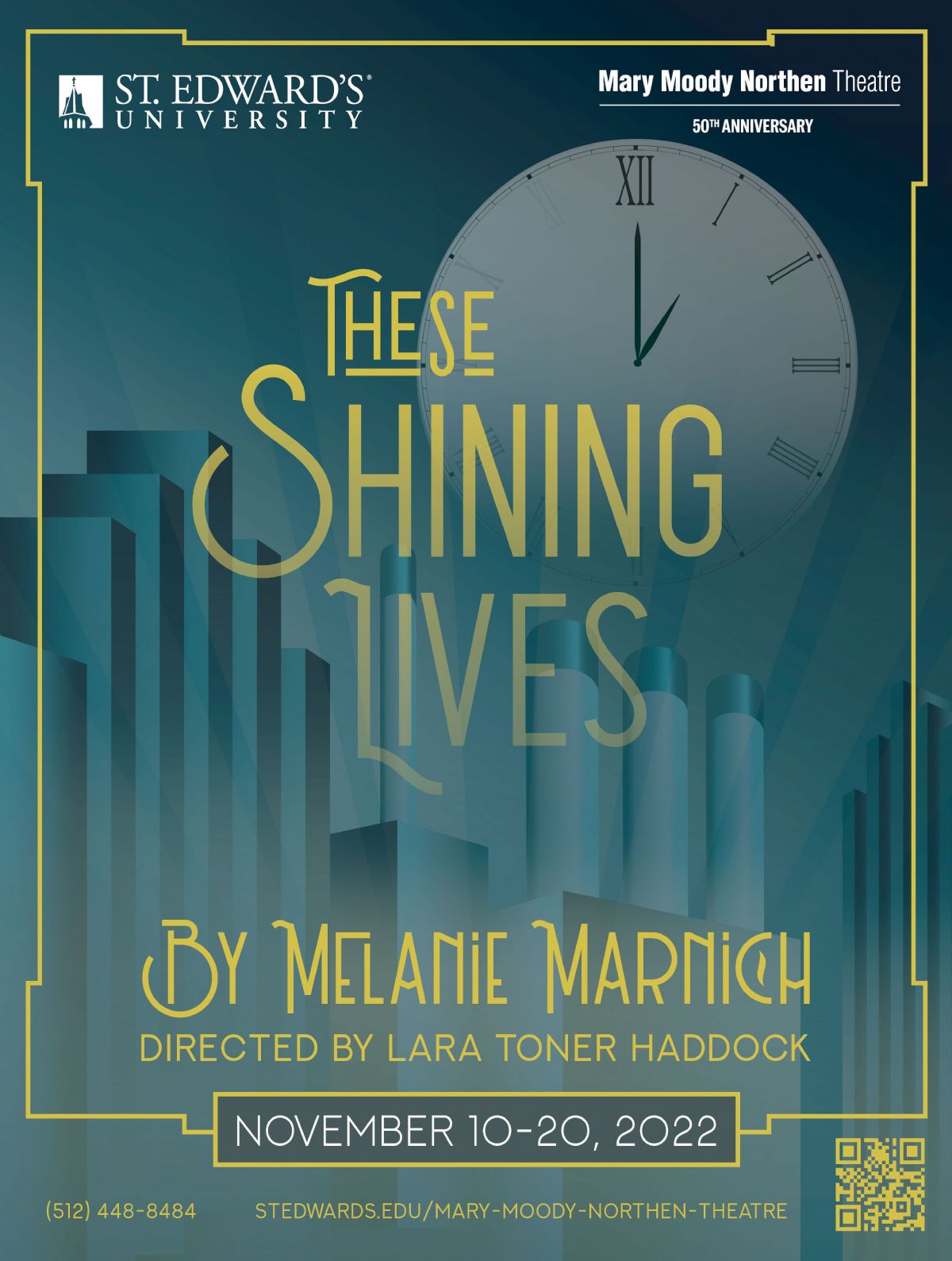