Review #2 of 2: The Outsider by Beyond August Productions
by Brian Paul Scipione

The program states: “Time: The Present. Place: The Governor’s Office in a Small State.” And so begins the new play by Paul Slade Smith, an actor and writer from Brooklyn. His play Unnecessary Farce was a runaway international hit with productions in eight different countries. His 2015 work The Outsider has racked up thirty-four productions in 2022 alone. This play has been described as “razor-sharp satire” and a “madcap political farce.” The elevator pitch calls it The Veep meets The West Wing.

It's fair to say the audience has a firm grasp on what they'll will be getting, and Beyond August Productions delivers the goods. The laughter begins as soon as the action begins and continues through the final curtain call. 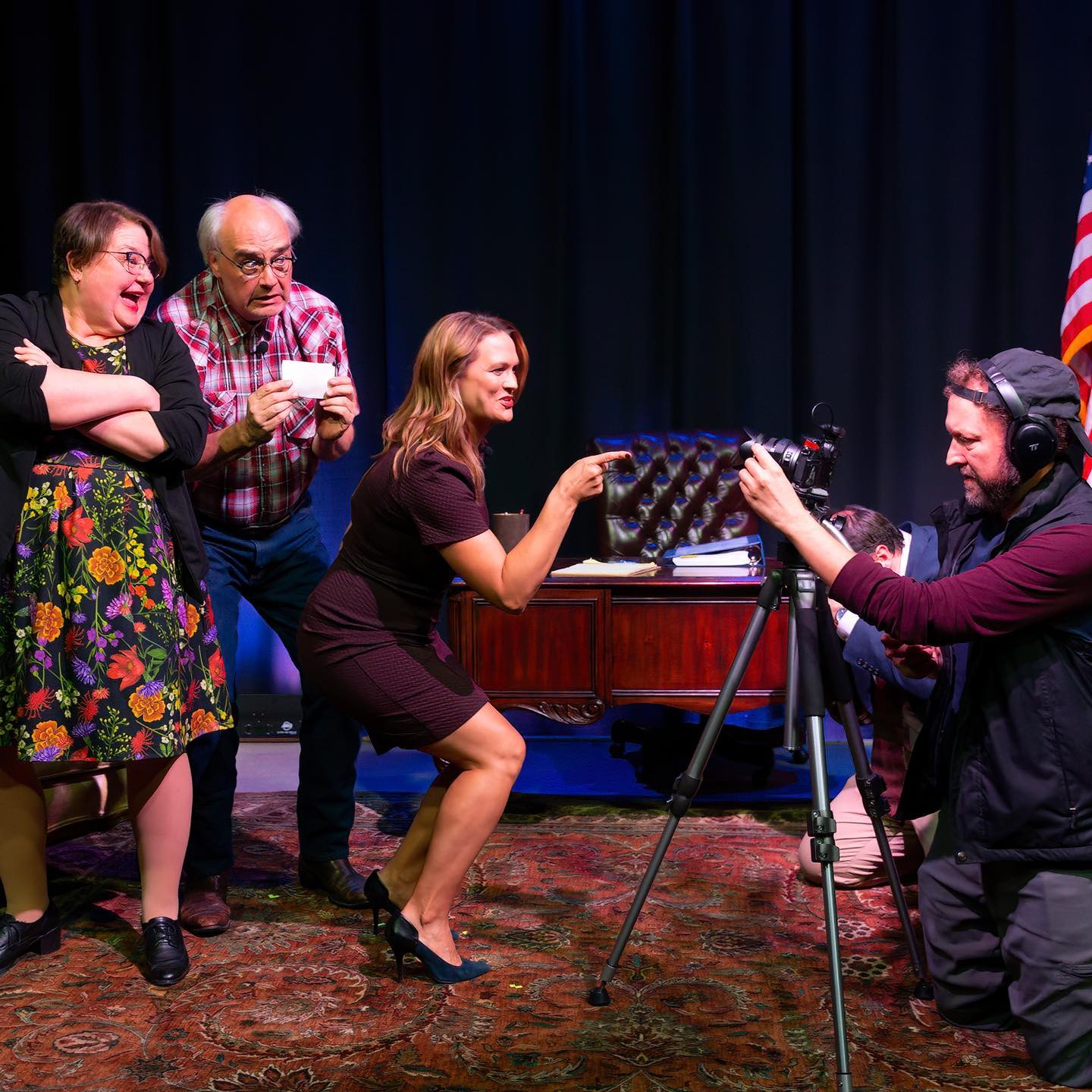 The plot? A well-meaning but non-charismatic do-good bureaucrat is thrust into the spotlight when he would rather be behind the scenes. The premise is so straightforward that it could be transmuted to nearly any time period or country. The Outsider reveals nothing new about the political process but highlights old, cynical but tried-and-true attitudes such as The people want a politician they can have a beer with, They care more about jingoistic slogans than actual good works, and The free press is not really free. Not exactly ground-breaking themes but very amusing nonetheless. In the end, The Outsider is essentially a modern fable complete with a pithy lesson and the requisite reassurances that the good guy always has a shot at triumphing in the end.

Director Jeff Hinkle is clearly aware of this structure and has constructed a performance that plays to the script’s strengths. The characters are more stereotypes than dramatic personae. 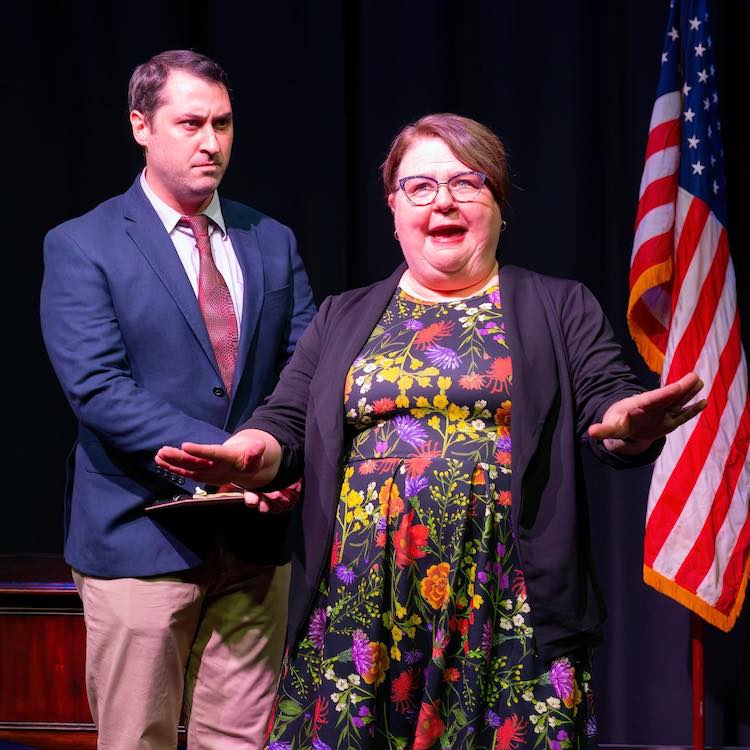 Stuart as the bumbling Newley personifies this idea, his performance strongly recalls the genius of Chevy Chase playing Gerald Ford on early SNL. Stuart's command of slapstick and blurts of groaning despair are precisely delivered, and soon the audience is laughing from the very moment he again hits the stage.  Connor as Louise Peakes the interfering temp  is a comedy tornado, smashing through each of her scenes with awe-inspiring timing and grace. Each of her lines is funnier than her last. Her character is a walking face-palm and Connor chews the scenery with infectious glee. Someone needs to write her a write her a one-person show post haste.

The script continues to up the stakes, and the whole cast keeps adding fuel to the fire. Patrick Wheeler as David Riley, the new governor's only staffer, was reminiscent of Michael J. Fox at the height of his powers, when during The Secret of My Success he made the audience relish his suffering. Tears of laughter were common during the performance I attended.

This is Beyond August Productions' second play, which suggests that Austin theatergoers can look forward to many more excellent productions

The Outsider
by Paul Slade Smith
Beyond August Productions 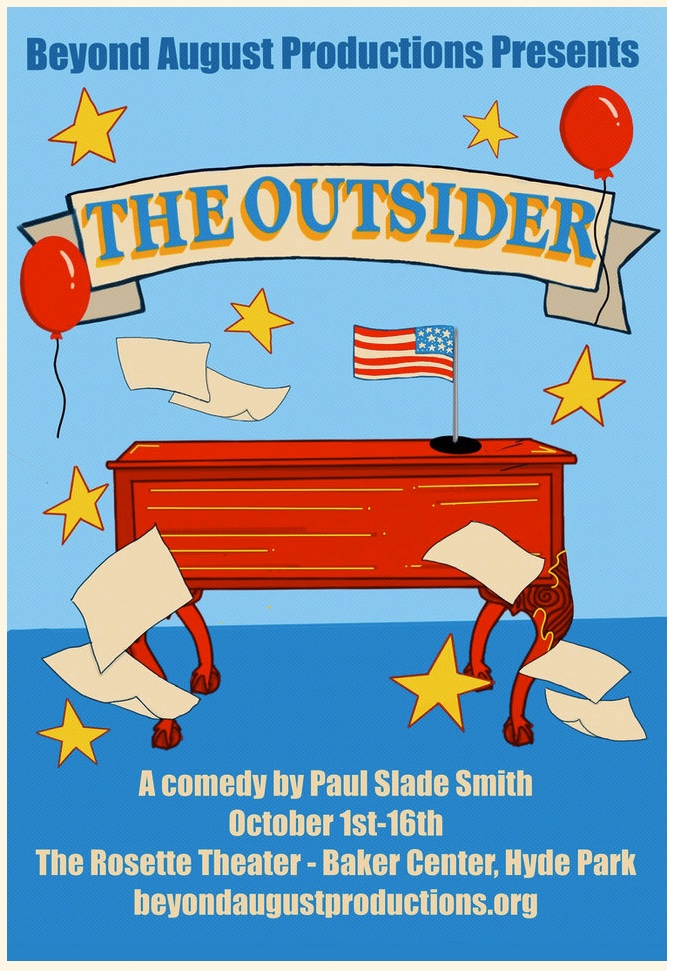 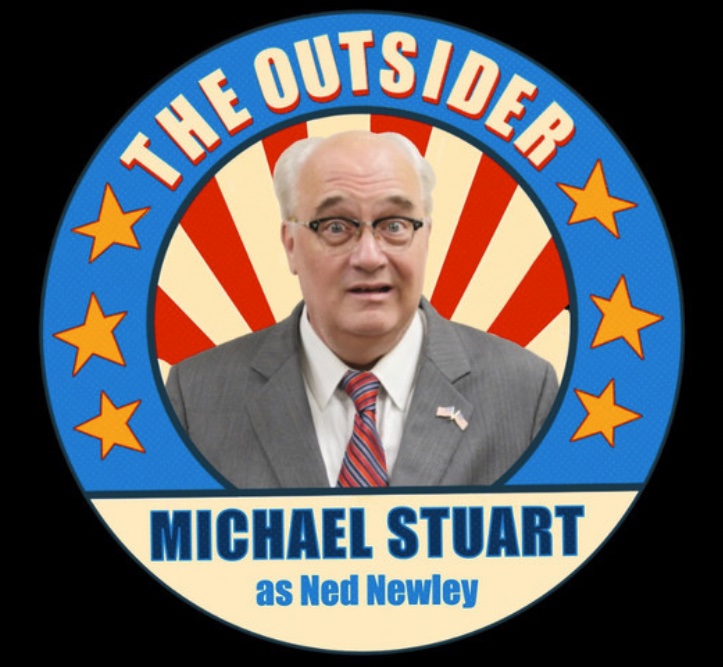 About Beyond August Productions