With Halloween upon us, director Andrea Littlefield and her folks at Lockhart's Gaslight Baker Theatre have brought us a twist on Noël Cowart's never-ageing ghostly comedy. Blithe Spirit is one of my favorites. Coward, a master of witty repartee and witty lyrics, is given no shrift at all in the GBT program. That's unfortunate, for at dress rehearsal the entire front row was occupied by eager theatre club teens—they could look him up at Wikipedia, of course, but a quick history would have impressed.

Brianne Klitgaard's meticulously designed set, on display as one enters the theatre, is a deft imagining of novelist Charles Condamine's country residence, done in deeply muted colors. That design choice is explained almost immediately, for when Cynthia and Steve Cruser step onstage as Charles and Ruth Condamine, they're in "gray-scale," the (un)colorful choice of the director. The poster and the photos taken on Thursday night let the secret out in advance, so this paragraph is no spoiler. They're soon joined by their guests, the short-spoken, rather gruff Dr. Bradman (Trey Thompson) and his ditzy wife (Francine Olguin). 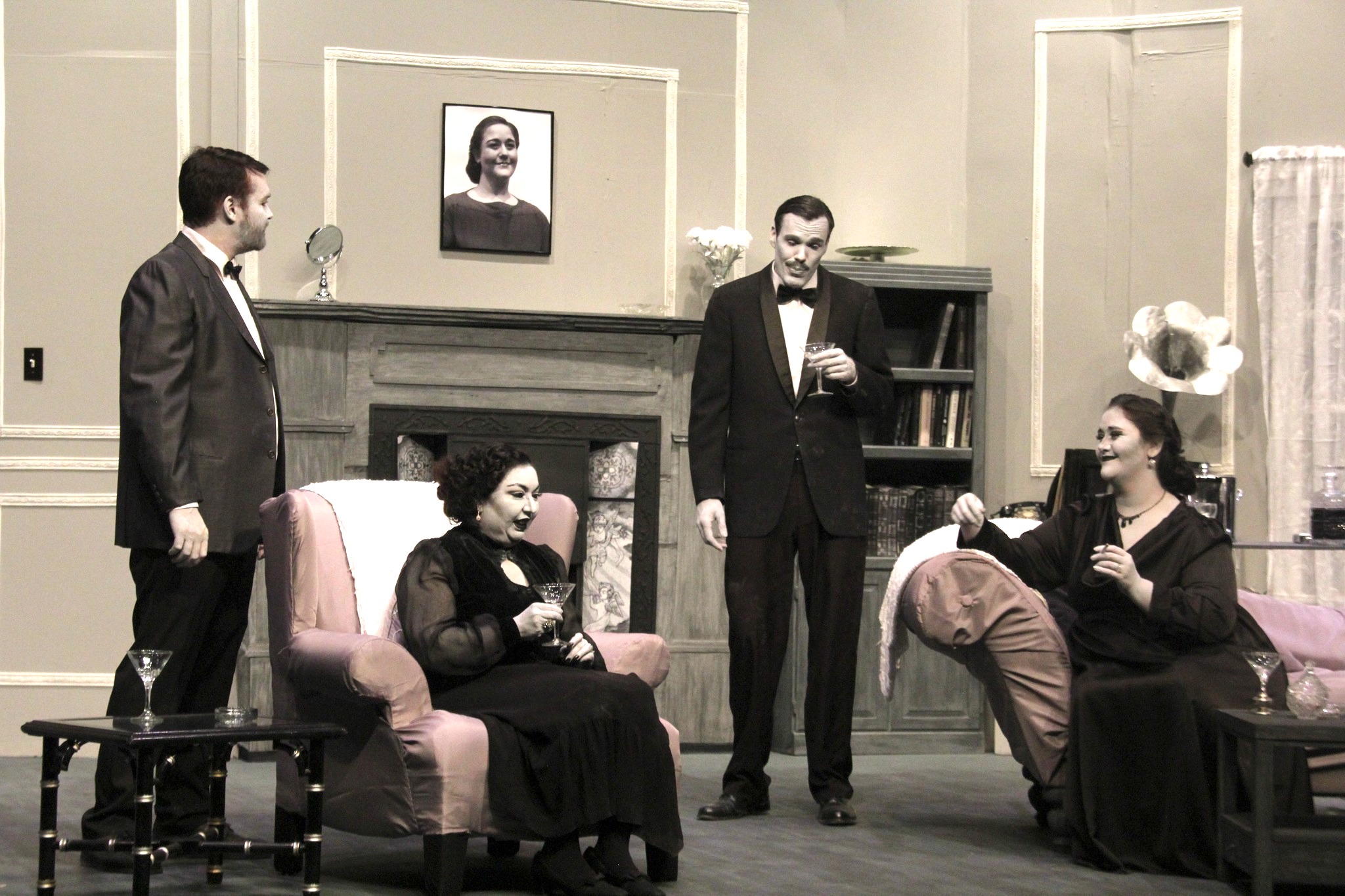 Will Mercer's makeup design matches skin tone almost exactly to the color of the walls. The concept renders Coward's sparkling play as a "mesquite-green-face" entertainment. This is no bad thing; the audience's perception adjusts before too long, and they're viewing the exposition, the pleasantries, and the Ruth Condamine's not-so-hidden annoyance as if from another, undefined dimension. Charles has invited the Bradmans for a séance with the somewhat odd new resident of the village, Madame Arcati, a medium and a spiritualist. The evening is Charles's ever-so-polite covert gathering of background material for his next novel.

During these goings-on, Kelly Martel totters through the scene as the long, lanky, and quite inhibited housemaid Edith. The Condamines find her quite hopeless, always rushing about, ever quick to accept their criticism and to try to mend her ways. Martel's largely silent comedy evoked the first boisterous laughter from the small preview audience, especially when she swigged a nip of sherry from an abandoned glass or pocketed cigarettes left hospitably on the table. Martell demonstrates the adage that there are no small roles, with the advantage that in the short pauses between scenes, she primly preps the stage, accomplishing stage ninja duties without ever breaking character. 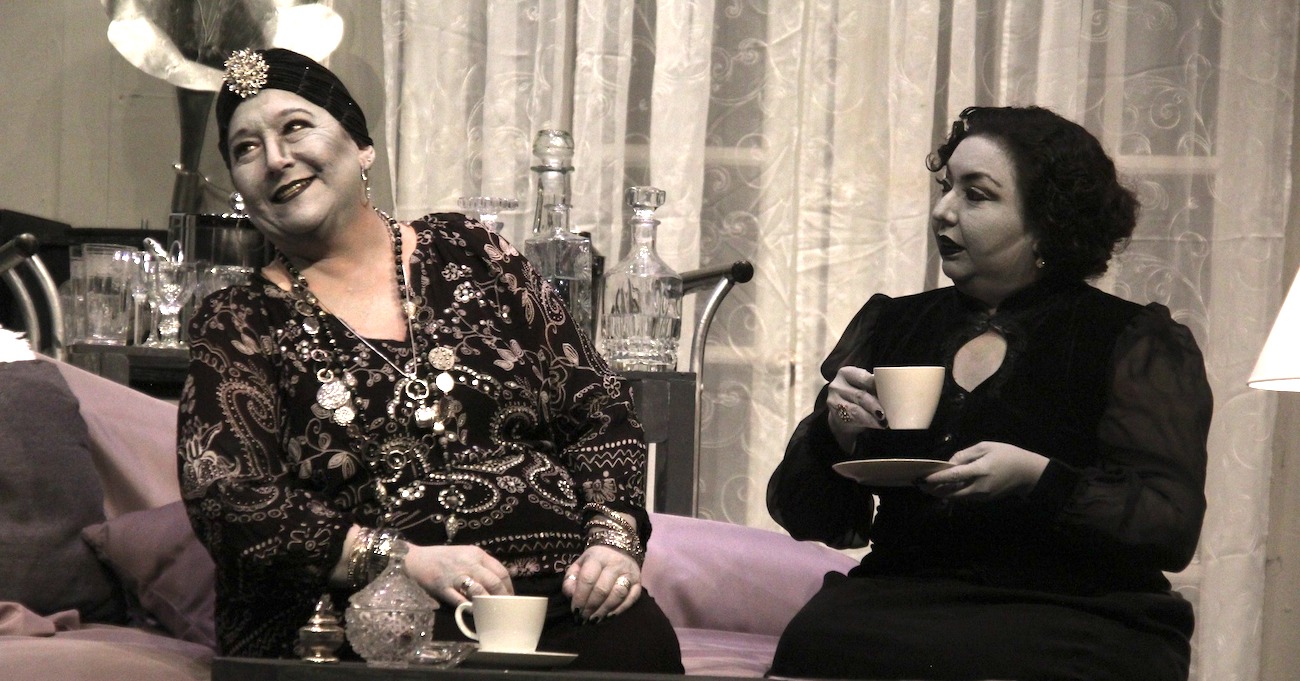 The role of Madame Arcati is one of those classics that any actor would love to perform. She's exuberant, friendly, verbose, and quite proud of her spiritualist abilities -- they first manifested when she was only four years old! Cari Bernstein  is attired in an intricate dress, so busy in black and white that one can imagine it resplendent with color. When the polite conversation is done, she sends the other four to the table on stage right, concentrates, and calls her spiritualist guide, a child deceased a century earlier.

Mysterious knockings ("one if yes, two if no!"), Mme Arcati's intense concentration, dialogue with the dead—and the visiting medium abruptly collapses over the back of a chair in a trance—or possibly a seizure. Something has happened, but what? Charles Conadmine hears a voice, there's a chill in the air, a draft from the window, and Mme Arcati distinctly senses an ectoplasmic presence.

London society ardently embraced spiritualism in the late 19th and early 20th centuries. Many sought to contact soldiers who'd fallen in the trenches in France.  Sir Arthur Conan Doyle, creator of Sherlock Holmes, did the same, seeking to summon his son and his younger brother, soldiers both, who died of influenza after returning from the Great War.

Coward's play mischievously upends those quests of recent memory. He imagines a successful séance, one that summons forth Condamine's first wife, Elvira, a free spirit (so to speak) quite unlike his Ruth, his second, who is all sense and no nonsense. The party disperses, Dawn Wright as Elvira manifests, but she is visible only to Charles. And ironically, she's in living color.

Coward and the cast make the most of the confusion. Condamine is extremely alarmed early in these goings-on, but he later gets used to having two wives. He's quite cross with Elvira the revenant, and Ruth, the real, assumes he's scolding her instead. Invisible apparitions certainly can strain a marriage. Ruth will dutifully accept that Elvira is present in the house with them, perhaps forever, and change her focus to getting rid of the haunting, possibly with the assistance of Madame Arcati. 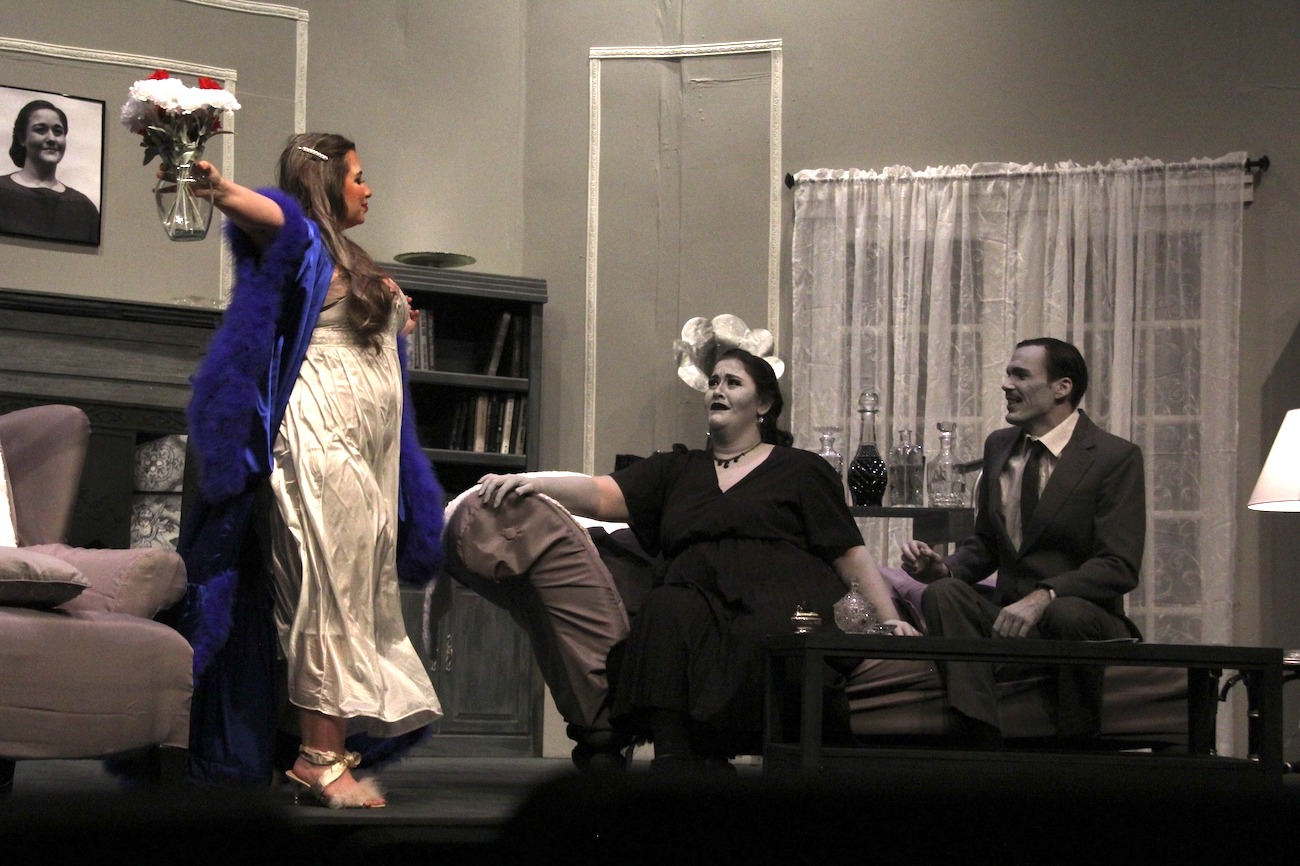 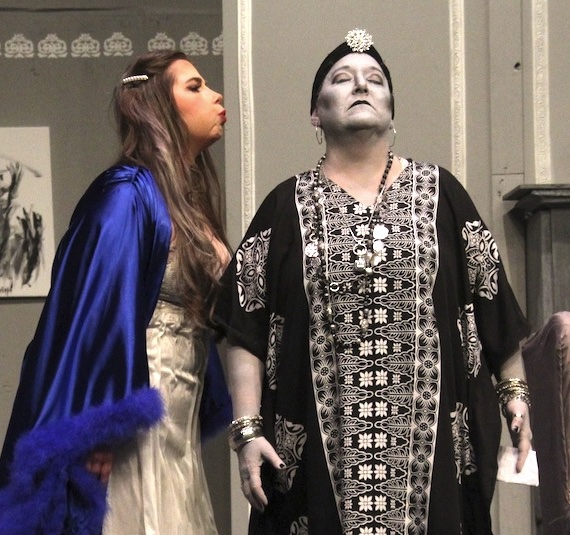 The medium, of course, is delighted to learn that Elvira is present. In turns, Arcati and Ruth try to track Elvira around the room, in a sort of looney game of blind man's bluff. Charles isn't much help, particularly as a translator, for he carefully avoids accurately delivering Elvira's surly responses.

This plot is all good fun, and Coward has some clever plot turns waiting for you.

Blithe Spirit, done in 1941 by that mad Englishman for the entertainment of London's chatting classes, succeeded tremendously. It ran in London for almost 2,000 performances and on Broadway for 650. People were delighted by its light entertainment and loving send-up of the oh-so-proper English upper-middle classes. The comedy and wit, the small cast, and the single set have made it a staple of community theatres, as well. This is the tenth production in Central Texas in the past eight years. 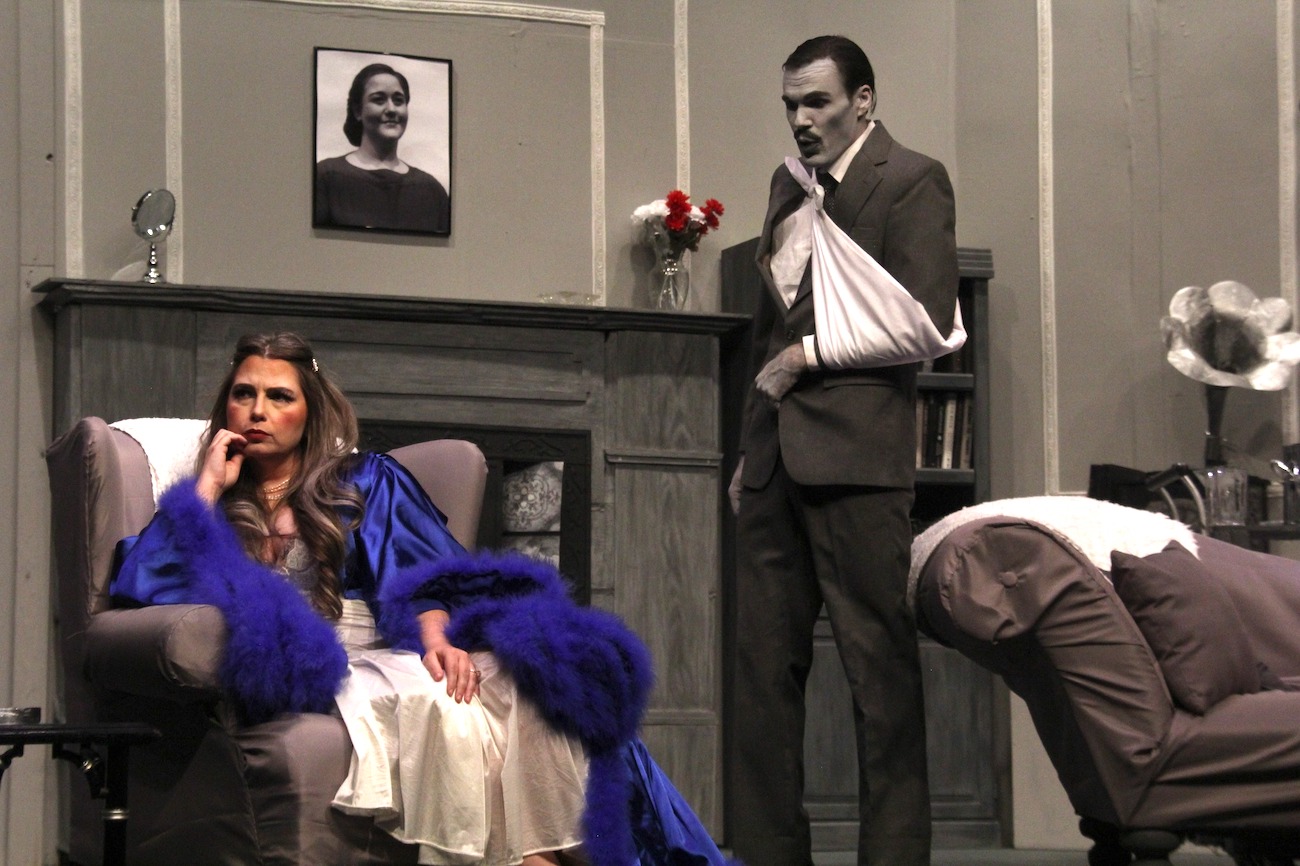 The pleasure of the piece is often in witnessing English gentility, contained and exquisitely polite, stressed by the unexpected or absurd. Contradictions, faux pas, and misunderstandings shake covention. Charles and Ruth don't exactly bicker; they express their differences with careful precision, however muddled their emotions may be. That's the delicious suspense of Coward's plotting. The English, being English, never run amok. 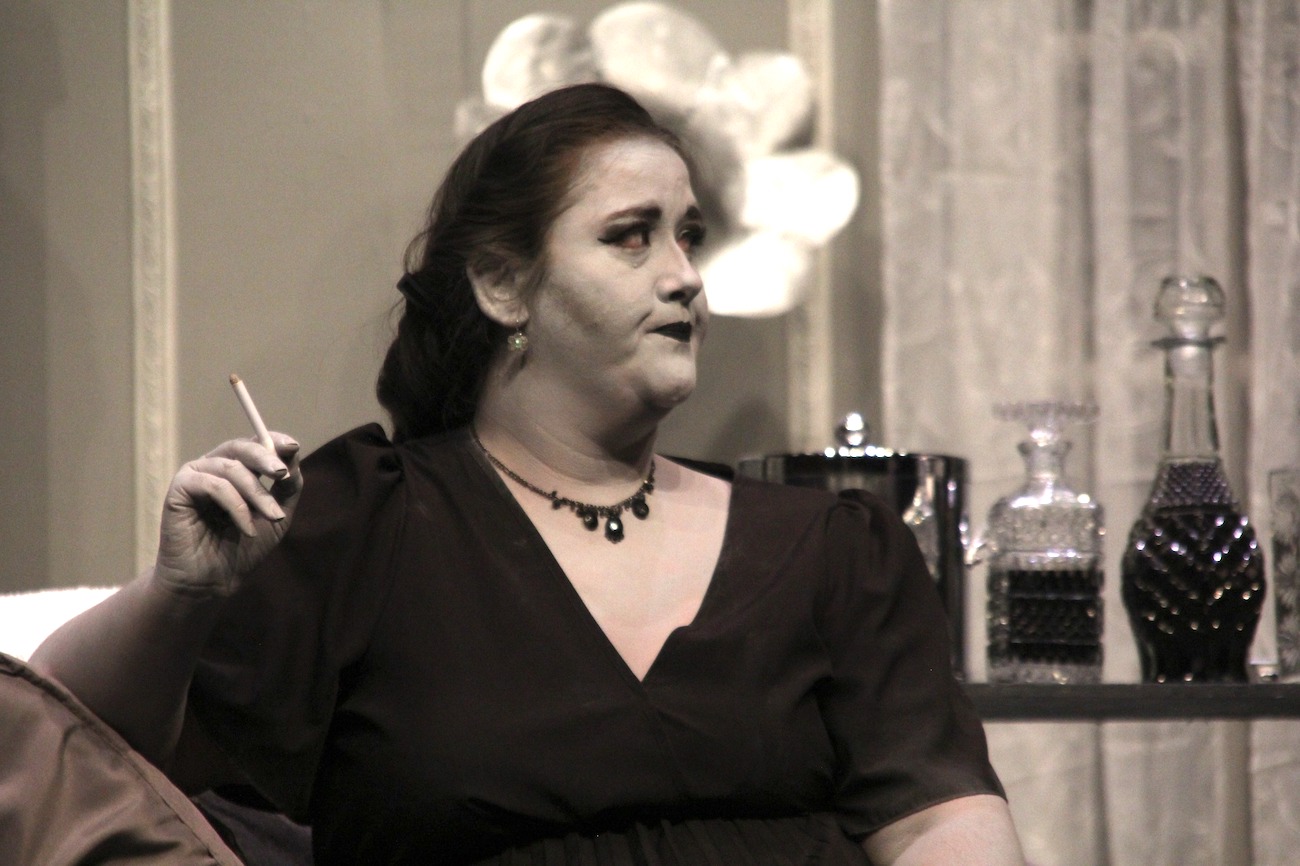 The Gaslight Baker director and cast put a subtly different spin on it. The color shift is the most obvious, leaving us to anticipate Elvira's vivid explosion onto the scene. It's a trick, but a cleverly consistent one, though actors need to pay a bit more attention to applying the makeup, especially on necks and above décolletés. If led to ponder, the audience might imagine they're viewing the Condamines from that other dimension, the one from which Elvira returns.

The accents are acceptably British Upper Class Received Pronunciation (approximately "posh"), but the attitudes are not. The GBT cast is earnest and direct. Cynthia Cruser shows us a Ruth Condamine who becomes angry, upset, and almost despairing; Dawn Wright's Elvira pouts and sulks. Steven Cruser as Charles seems less a novelist than a young banker; he's worried but never befuddled. Cari Bernstein as Mme Arcati has a "get away free" card, for her character's impetuous confidences and confidence in her abilities are the opposite of posh (amusing and endearing in any circumstances).

Director Littlefield and her cast do an outstanding job with Coward's dialogue. A special mention to Cynthia Cruser, who never faulters with Ruth's lengthy and often complex speeches. Cast members keep the plot surging with their swift and unerring exchanges.

Click to view the program for the Gaslight Baker Theatre's production of Blithe Spirit. 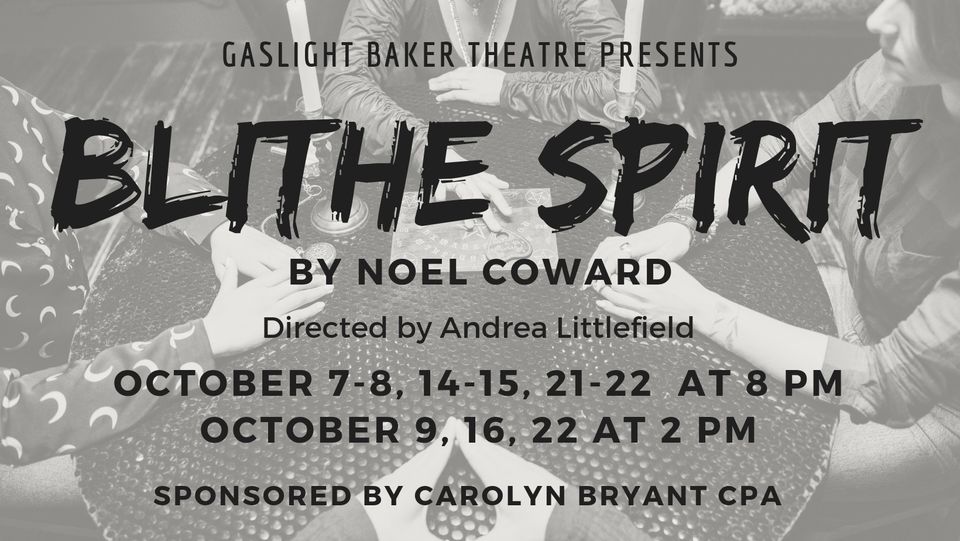