Review: The Mad Scene by Performa/Dance
by David Glen Robinson

Something snapped deep in Jennifer Hart‘s brain. Mad Scene flowed out, a goo of images and actions, all soaring and crawling, angelic and monstruous, unified and diverse, harmonizing and chaotic. Time played for putty in Hart’s hands, with a giant set of the great hall of Versailles in projection and a disco ball over stage center. Projections and video gave us more views of Versailles, woodland Texas, and stone architecture, locations unknown. The first dance by the ensemble in that great hall began conventionally but told us what we were in for. One of the ballerinas fell more than once, losing her partner, all to comic effect. That effect was easily achieved as the dancers were costumed in outrageous seventeenth century court garb, topped, for men and women, by high, white, pompadour-styled wigs. 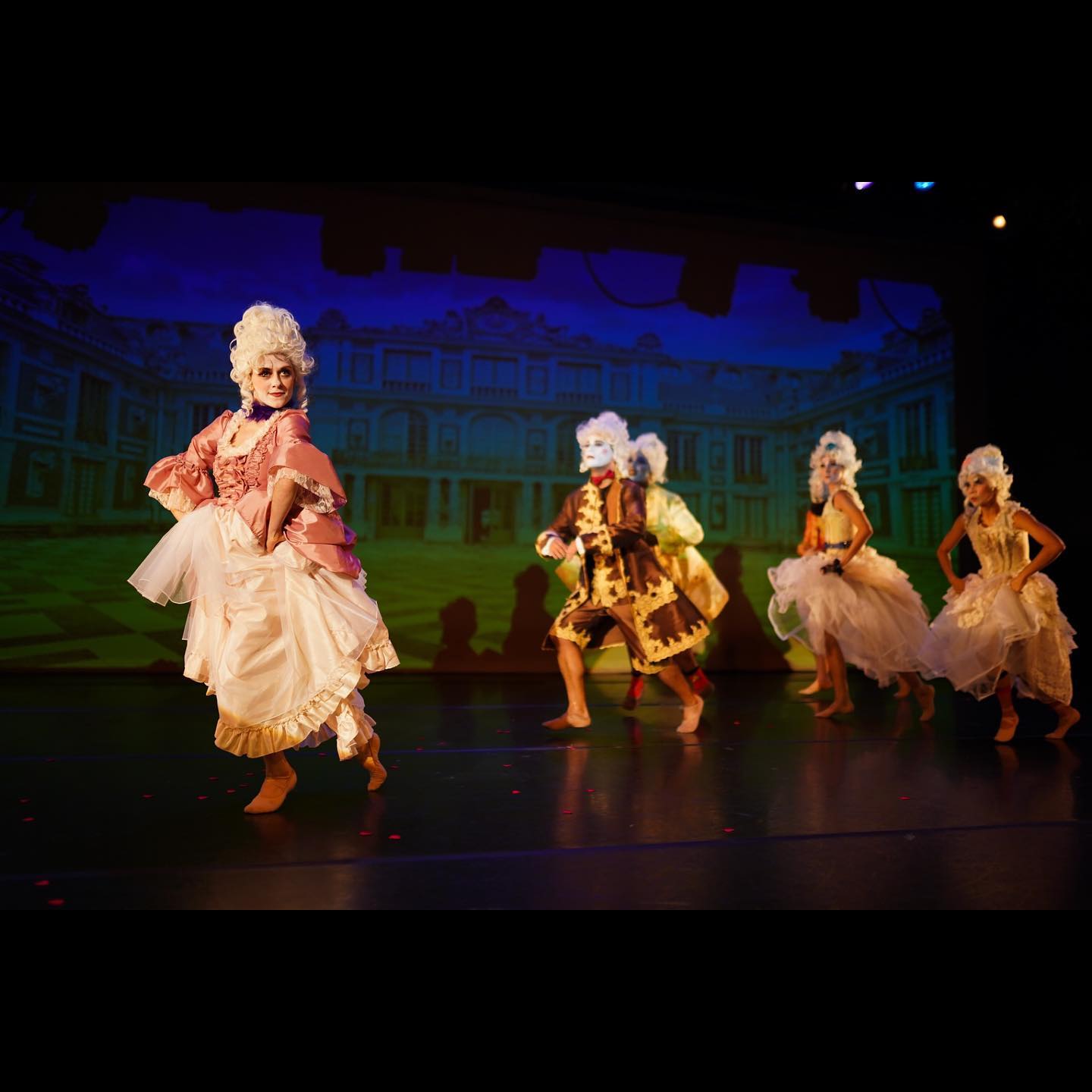 Mad Scene is Performa Dance’s first full production in several months, performedat their home base, Ballet Austin's Austin Ventures Studio. The location is downtown Austin, and the show exudes downtown sense and sensibility. The show is ballet-based dance with dances in slippers or socks or bare feet, depending on the needs of the choreographic concept. Here is the first indicator of dance-canonical breakage and free blending and borrowing from many forms at will, relatively unrestrained by overarching rule-based concepts. The long show had a fifteen-minute intermission, much needed. It comprised a series of mixed-composition dances from full ensemble through combinations and solos and dance videos (all the videos featured company member Alexa Capareda) and spoken sets by guest physical artist and actor Kelsey Oliver of Frank Wo/Men. The opening of time capsules was indicated by costume changes for dances and acting bits.  Costumes are by Jennifer Hart, Kelsey Oliver, and Emily Carwood. 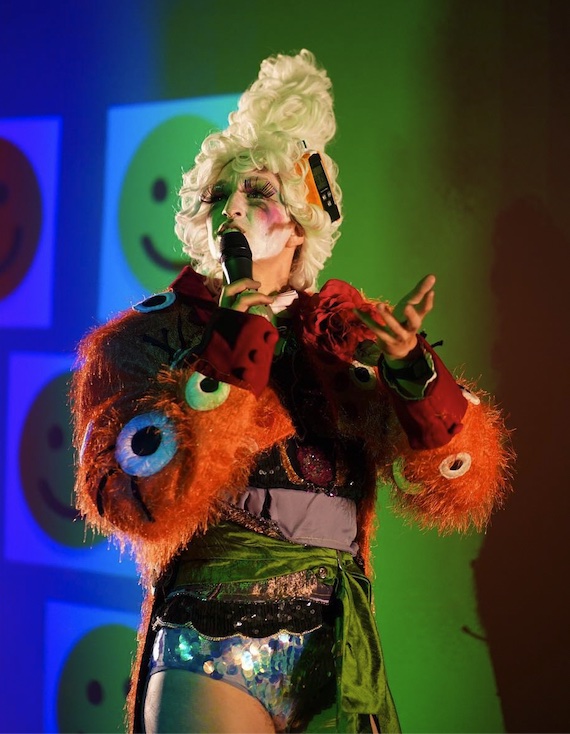 Mad Scene had a simple linear sequence of presentation, but the progression of images and floating time bits was anything but linear.

French King Louis XIV and his court palace are the launching pad for Mad Scene, and this is by intention. The king is correctly credited for forming the first ballet company, in which he performed as a boy and young man. Kelsey Oliver, the psychopomp, MC, and costume freak supreme of the entire show, quoted Louis XIV's comment that he loved fame more than life itself. This set most of the overt themes of the show—fame, celebrity, and their discontents, all in kaleidoscope time.

On a deeper level, nobody seemed to recall Quatorze’s more consequential quote: “L’etat c’est moi,” (“I am the nation”). His France, post-Thirty Years War, solidified monarchies as one with the nations they led, with monarchs imposing unity and consistency by right within their borders. They concretized hierarchy within and without.

Mad Scene seems to say “there’s been a change in all that, mon vieux!” In the fragmentation of time, we’ve also come up to woke culture and cries for racial and social equity. New concepts of society and politics, some quite radical, have taken hold, perhaps becoming downright trendy. In contemporary arts, frame bending or breaking has become de rigeur. Many times, as in Mad Scene, the change is manifestedin cross-dressing, gender role reversal, or new directions. Much social theory has built up on that, and Mad Scene's downtown/UT audience is on top of it. Oliver, who had a decibel meter velcroed to her towering pompadour, used the term heteronormativity--and nobody flinched.

Perhaps a goal or direction to pursue is the exploration of what some anthropologists call “alternative temporalities” that seek new readings of history and culture. As Dawdy puts it: “I pin hope on the new possibilities that come from willfully collapsing archaeological and ethnographic time. New ways of imagining time and social process are emerging in both scholarship and popular culture that create the possibility that anthropology’s subfields will be pulled back together after the past several decades of schizomogenesis[1]” This potential applies to the fine arts as well.

But what about the movement? Each of Performa Dance’s dancers have perfected in themselves the canonical movements of ballet, so little needs to be said of that. They didn’t miss a gesture or a beat. Of interest to the dancers and choreographer are the connections, transitions, and segues into and out of pedestrian movement and emotional stances. All were well-executed, most of them for comedic purposes.  Hart did not neglect the acting side of things; instead, she leaned into them. 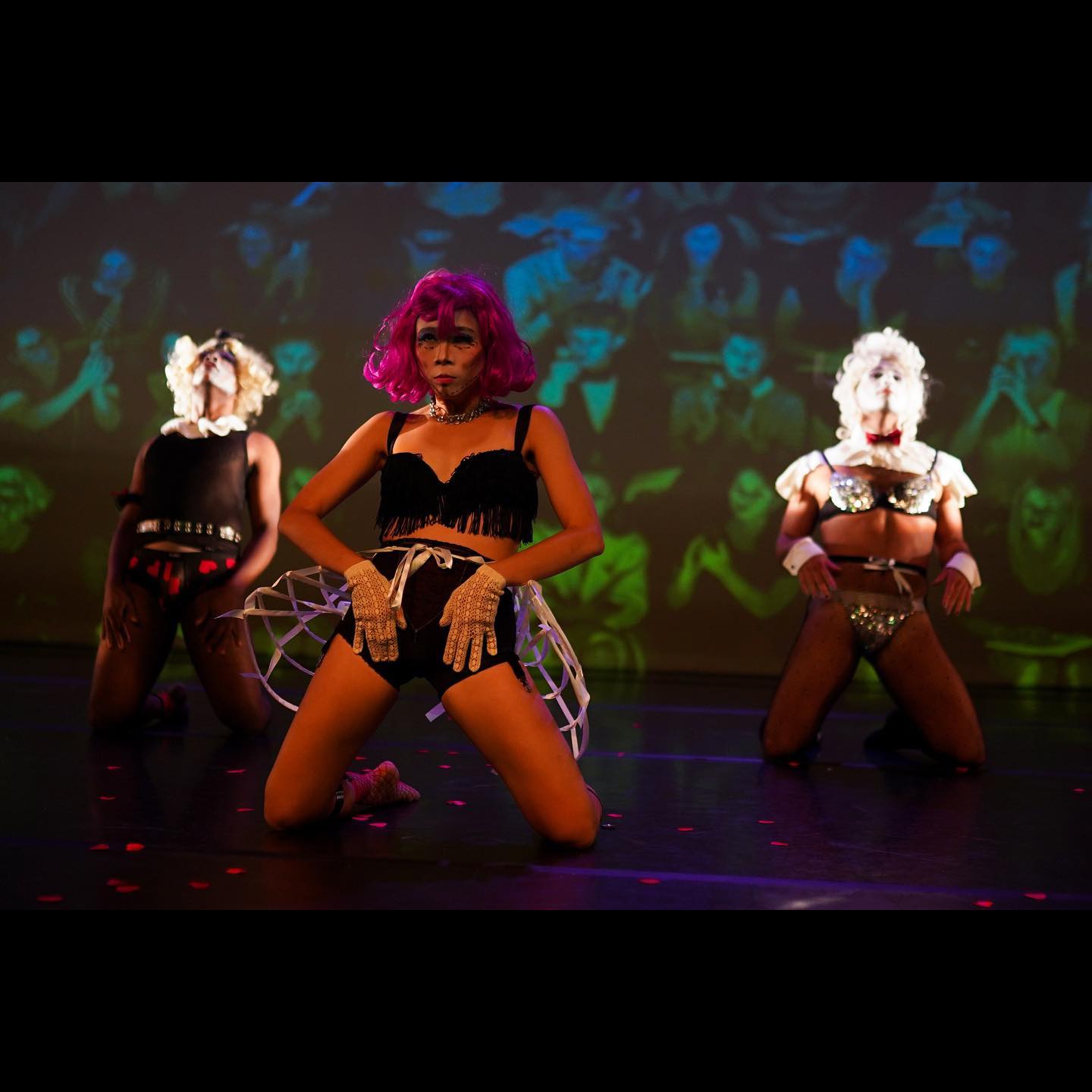 The hands-down star of the show is Alexa Capareda. Her discipline is such that she applied exquisite technique to every pacing run across the stage, the height and leap of every step the same until exit. This was true of her every other gesture and movement. At the same time, her comedic sense is impeccable, adding a very dry-vermouth sense to her comedy. That was bolstered by the fluorescent fuchsia (I checked with Sherwin Williams to confirm the color) wig she wore for about half the show. She was the only soloist in all the videos edited by Hart and Edward Carr, costumed both for the crazy seventeenth century outdoors and in a sumptuous print gown for the darkened indoor sequences. Her videos reedited together would make a worthy contribution to the upcoming, well-regarded Dance on Film festival. 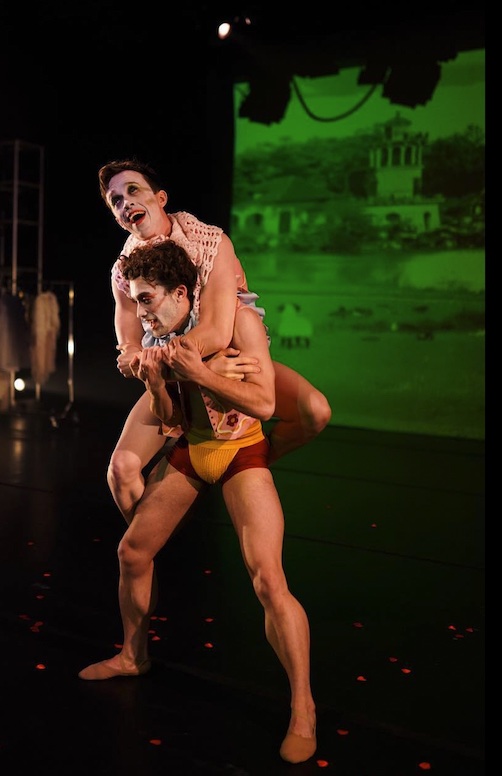 A through-line in the show involved the costumes. Through all the principal numbers, the company and Kelsey Oliver gradually lost the Versailles costume pieces, including those pompadours. Alexa disappeared her fuchsia wig. Eventually, in the final slow and very somber finale—very much a reversal of traditional ballet finales—the company shed all their costumes and hung them on clothing racks onstage. They washed their faces of make-up and finished the piece and the show in their home skivvies. This left them almost nude, stripped of every artifice, down to the essence of identity in their own skins and no one else’s. Alexa sat downstage center, gazing impassively into the audience. The entire company performed one more strenuous and passionate passage of floorwork—again, not traditional ballet—and that was the end. The progressive costume loss indicated the struggle through time of dancers and others for freedom and acceptance as they are, striving to break out of restrictions and requirements. They clearly showed us the core discontent of fame and celebrity: loss of identity. Of course, in a vast show with this much content, humor, color, light, and varied music, many other interpretations are possible, perhaps probable. 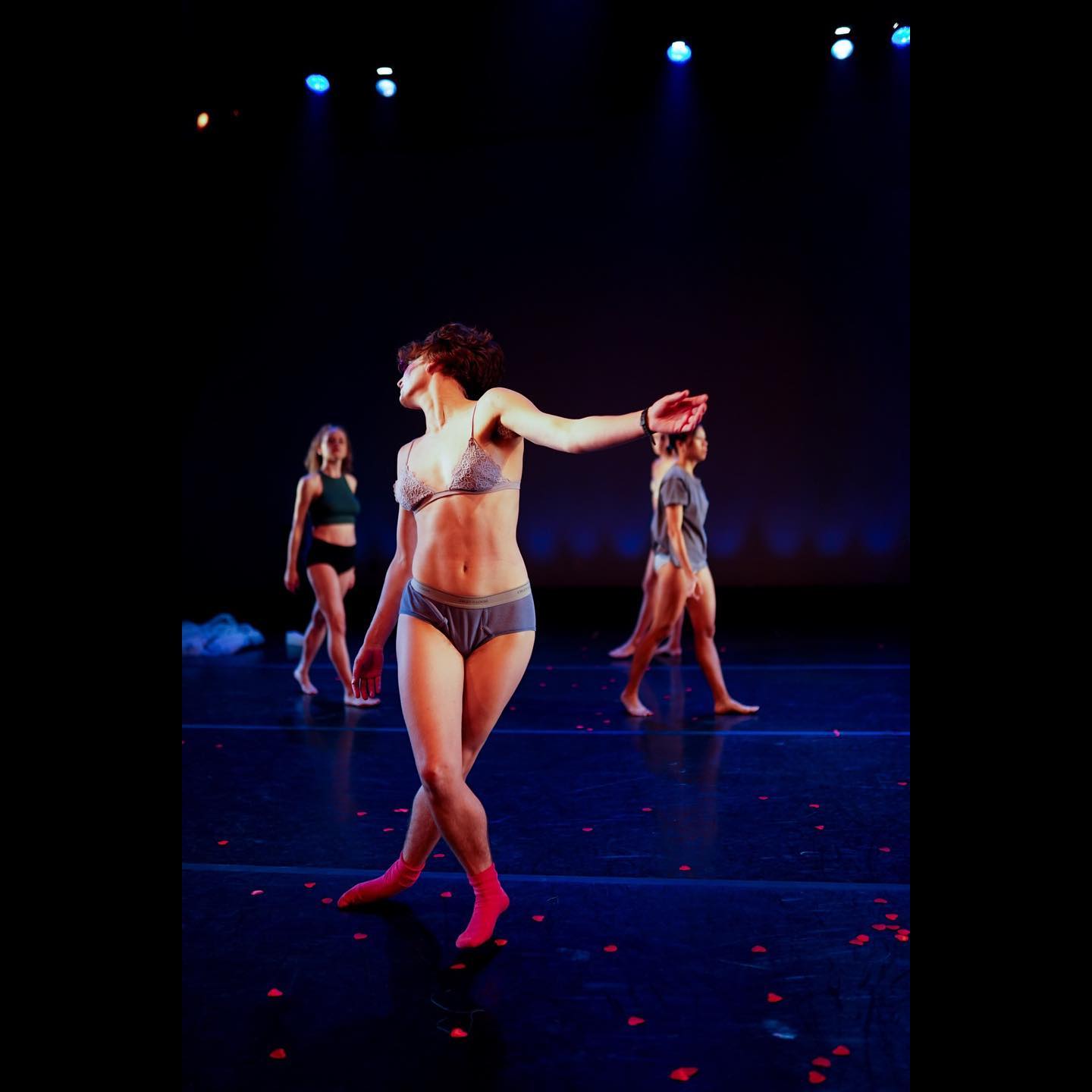 This reviewer thinks that Jennifer Hart is saying in part through her choreographed show, “No, no, this is still ballet, but it is not your seventeenth century king’s ballet. We are not moving into XIV’s future, we are already there. Our future may relate more to the quantum multiverse.”

Time, of course, will tell. The major influencer here is Hart herself. Performa Dance and Mad Scene are the marks of brilliance set free.

Dawdy, Shannon Lee. 2010. Clockpunk Anthropology and the Ruins of Modernity. 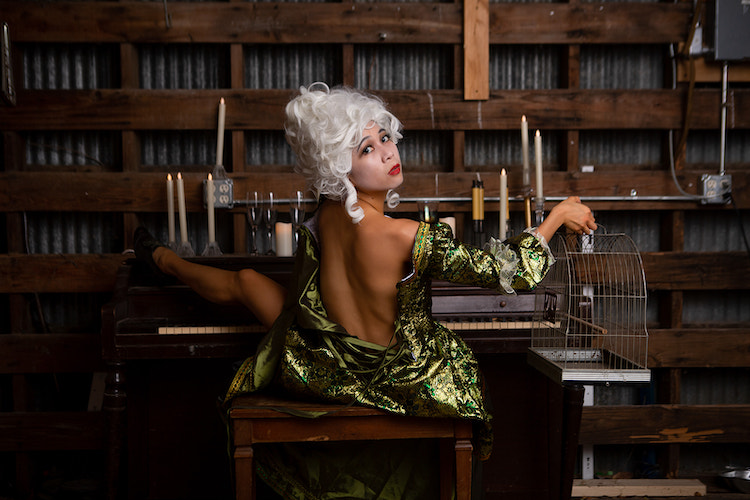 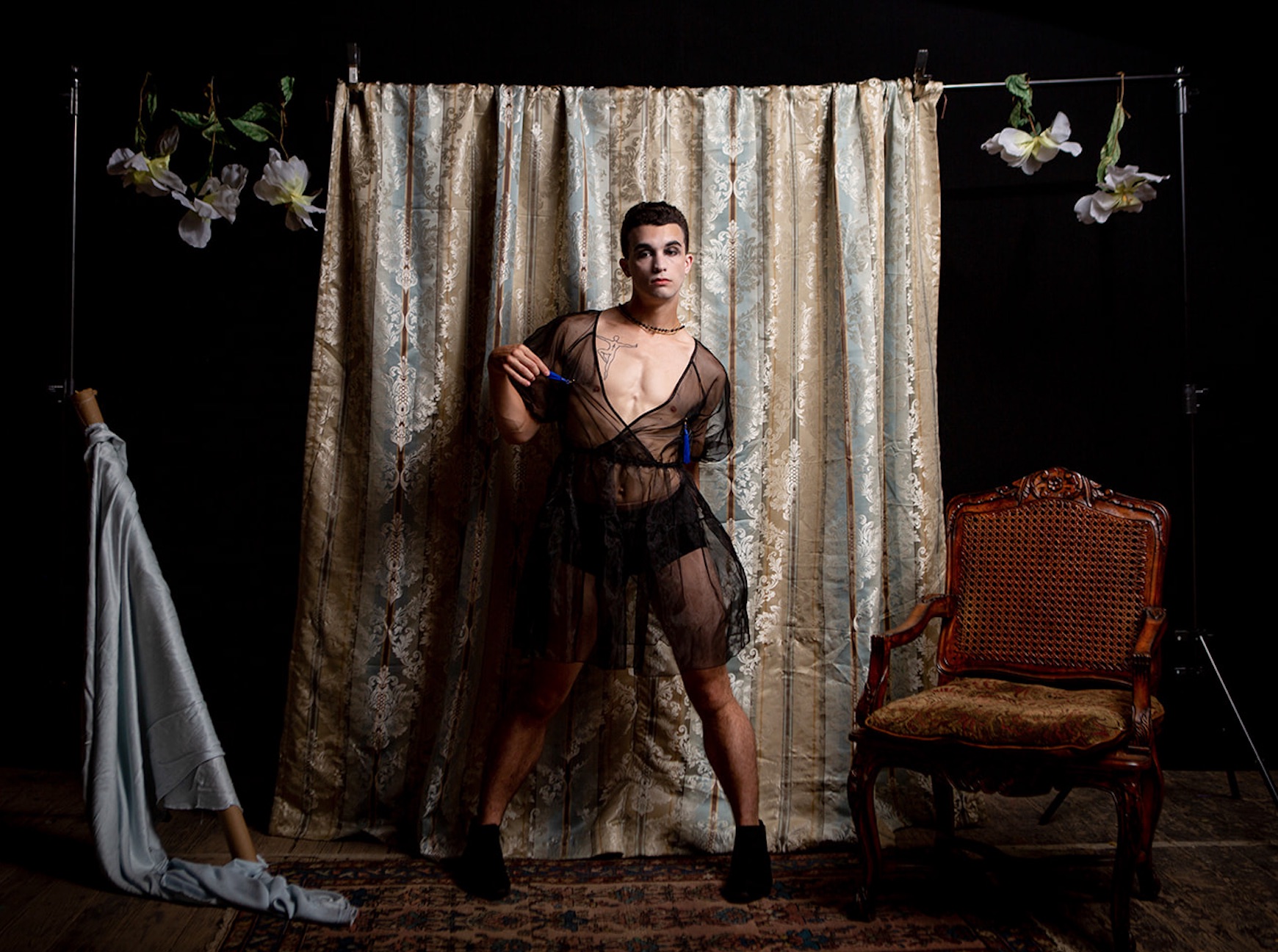 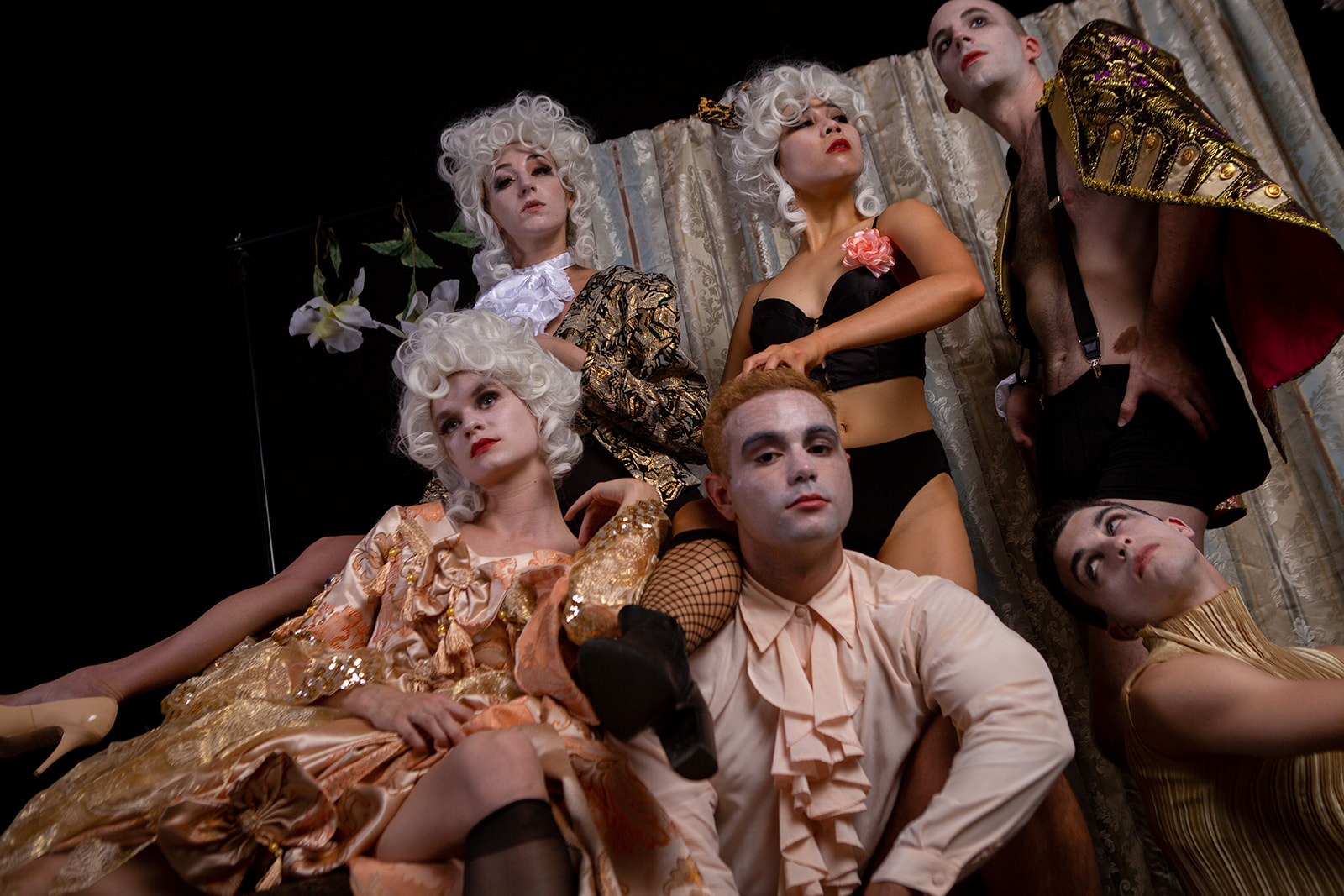 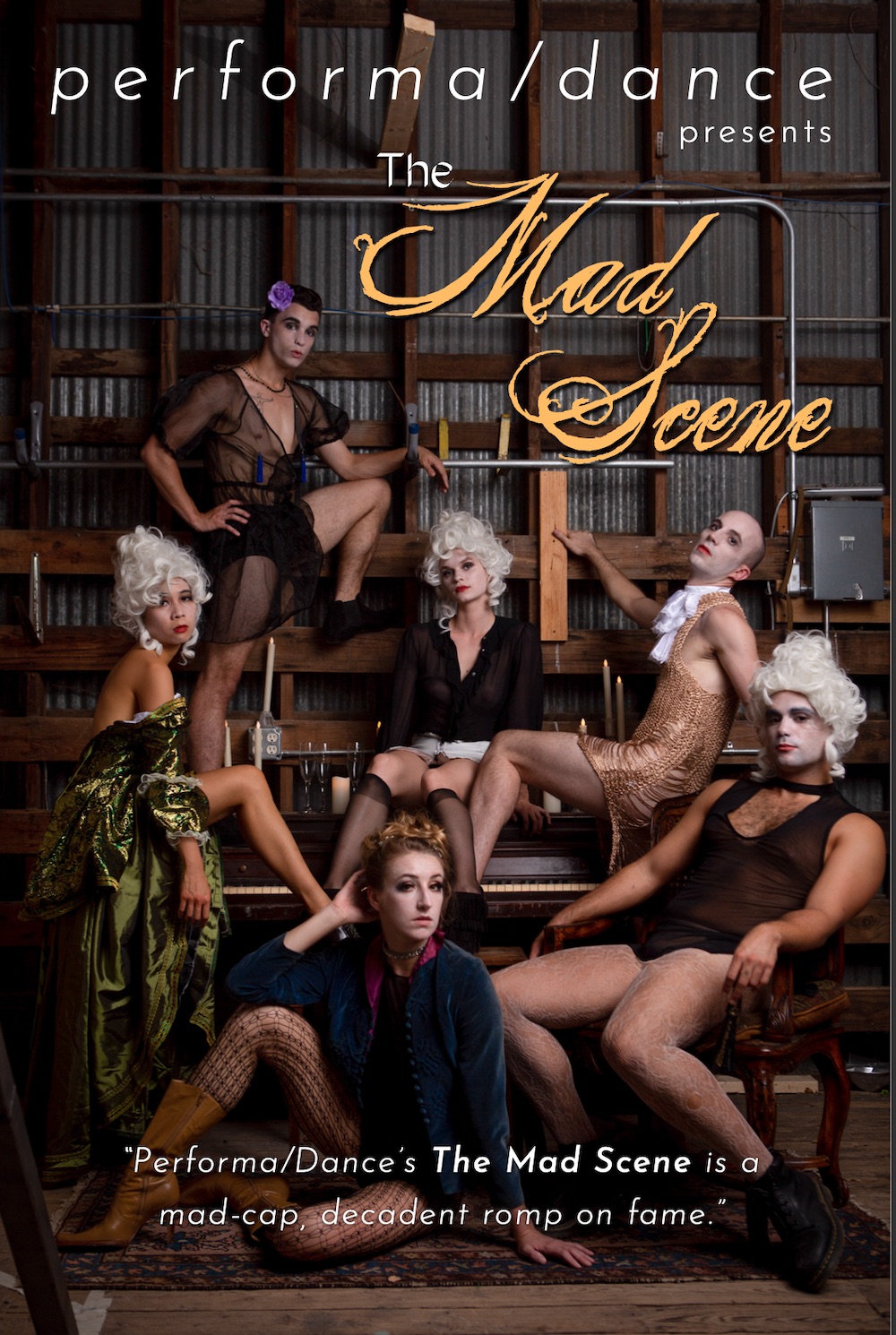 Performa/Dance is a project-based company founded in 2014 by award winning choreographer Jennifer Hart in collaboration with Edward Carr, a company dancer with Ballet Austin. Our mission is to nurture …