Review: A League of Her Own by Bottle Alley Theatre Company
by Justin M. West 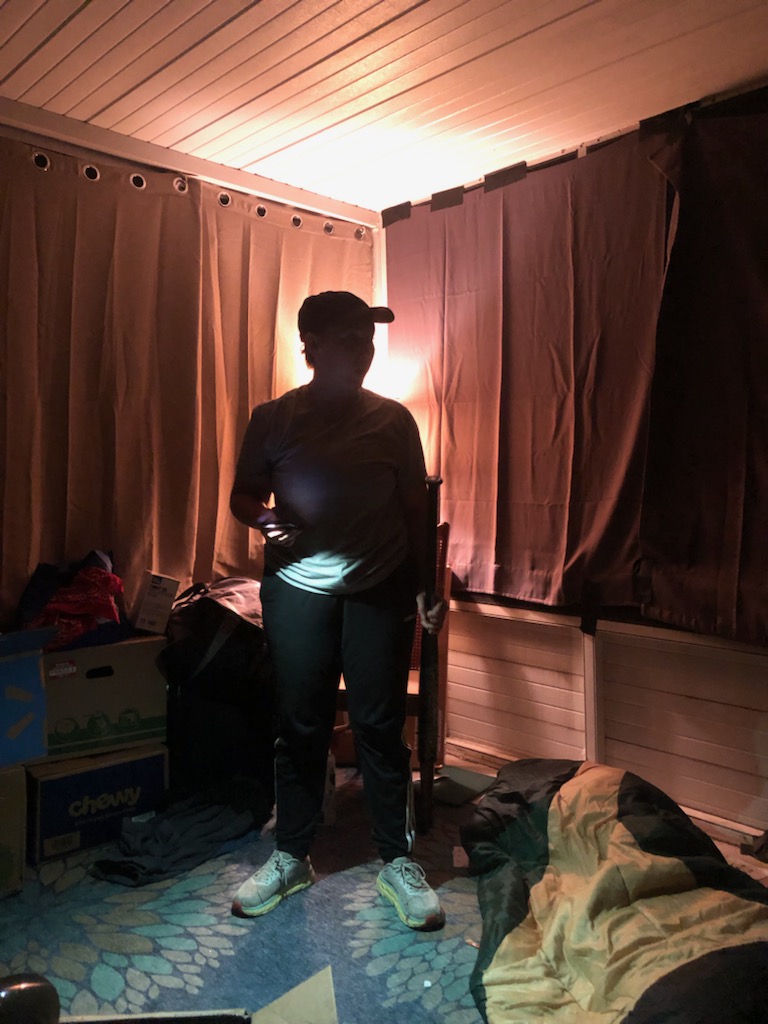 For years I have maintained, as I likely always will, that theatre is not and should never be a "safe space."

I am not referring to the creation process, of course. The creation of a piece, from its inception to its rehearsals and performances, should absolutely be a safe space for all involved. The safety of performers and those supporting them is paramount. But the art, itself? The ideas and emotions it evokes and provokes? The art owes you nothing, especially not comfort.

In recent years I have been unsettled by what I see as a rising sentiment of apologetics. Difficult subject matter, rather than being simply noted to inform audiences, is danced around and presented almost shamefacedly. I've seen directors stand up before a performance and, after an audience has already been given notice on the show's website, playbill, signs in the lobby, and a marching band waving a marquee, say something to the effect of, "We're serious, your feelings might get a little hurt!"

Enough. Theatre doesn't have to be comfortable, especially if the subject of a piece of art is itself painful. Steven Spielberg didn't talk to the camera at the beginning of Schindler's List and tell you that you might wanna close your eyes at certain parts. Don't expect a director of a play to do it, either. Know what you're getting into.

To quote the great Hunter S. Thompson, "You buy the ticket. You take the ride."

No show I have seen has better exemplified the correct approach to this than A League of Her Own, the most recent production from Bottle Alley in tandem with Just Friends. This show has seriously stuck with me in a way that few have, challenging preconceptions that over an hour I came to learn were egregiously wrong.

The show was successful in that effort only because it handled difficult subject matter in the best way possible. League trusts its audience's maturity. While giving some notice to allow an informed decision, I sincerely respect the company's choice not to give too much away, not to hold the audience's hands and pat their heads. Rather than give us one last chance to "sneak out," the company advises us before opening the doors, "You can leave, but if you decide to, you can't go back in." This was, in my view, a very mature way of saying, "This is going to be hard to watch… but you need to." 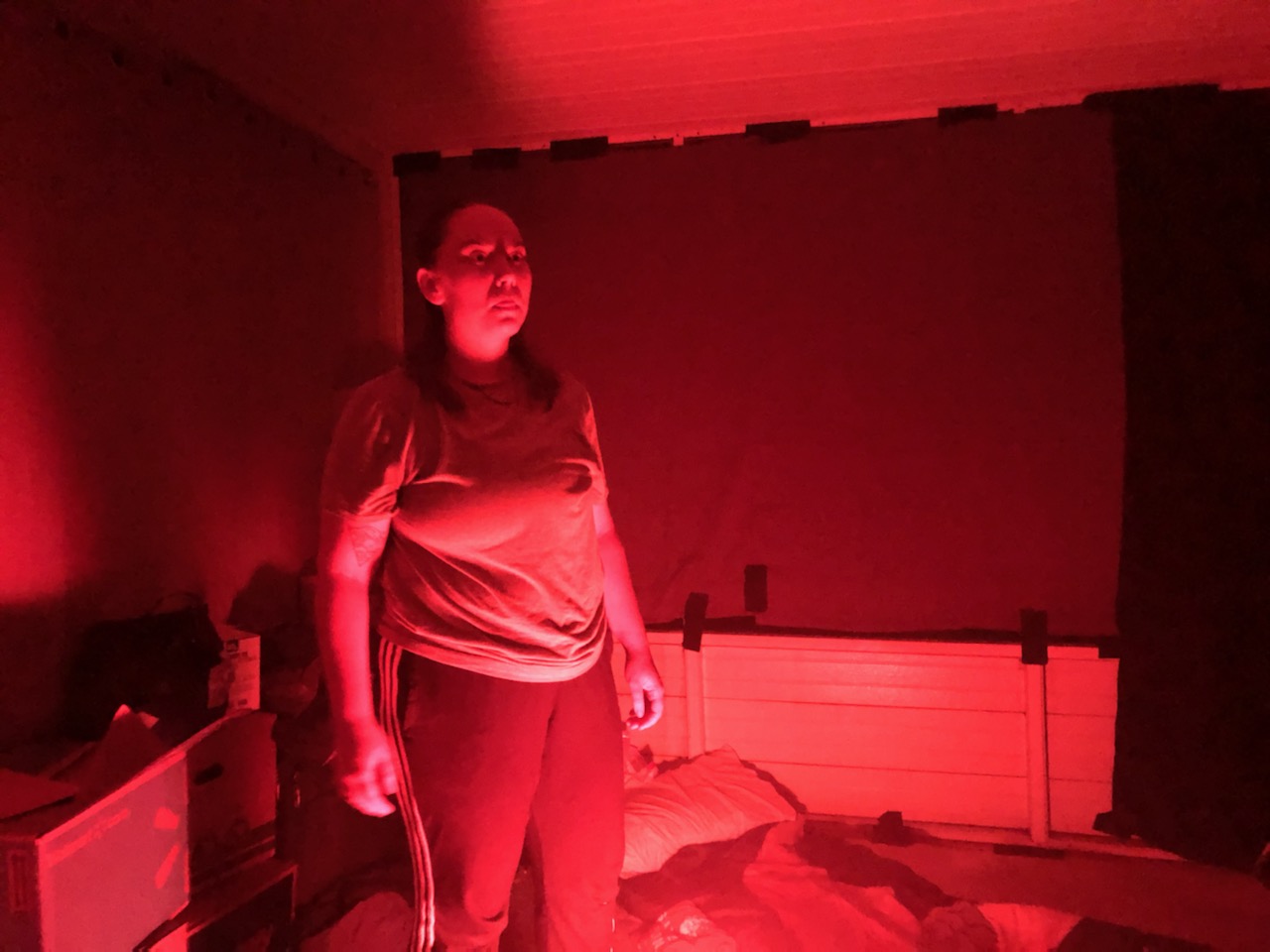 There is one protagonist in this show, and no other is necessary. To say that Abby Ferree as Sam gives a great performance would be a criminal understatement. She instills within us the urgency, the fear, the utter desperation of a situation so utterly foreign to us as to seem imaginary. It's terrifying. Ferree exudes a frantic desire to be free of a demon both unseen and omnipresent, and we feel every flood of emotion she so expertly wields. We want to help, but we're unsure what to do. 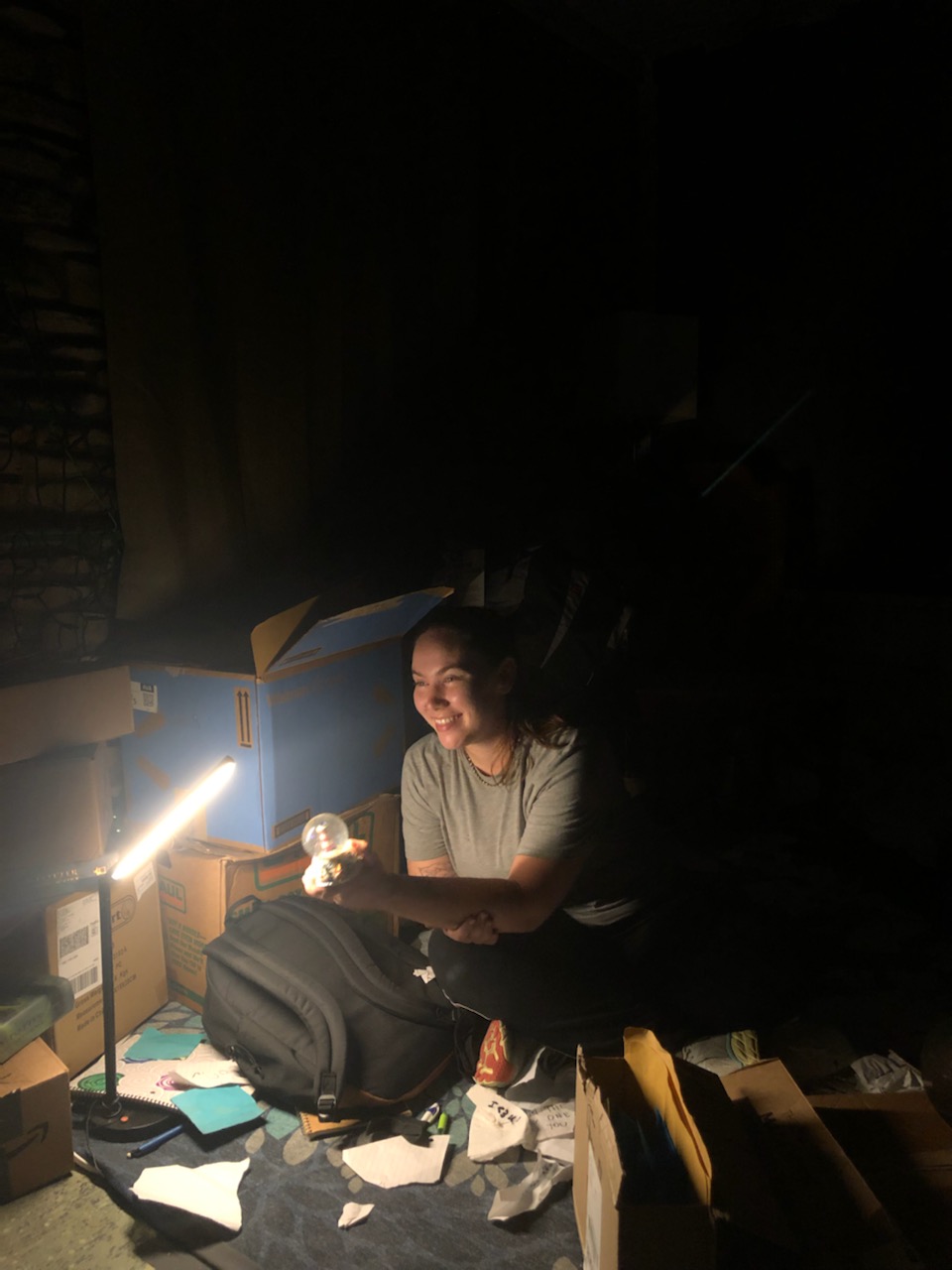 There were times during this performance that I really did want to leave. But I knew I shouldn't, because Sam couldn't. She had no one, and as she locked eyes with me and the others in the audience I knew she needed someone. Yes, it was challenging, but it needed to be. No matter how difficult this piece is to watch at times, it pales in comparison to what Sam is enduring. To leave would be an insult, a shielding of one's eyes from a very real problem that women encounter with frightening frequency.

None of this is to say that Sam is a helpless character. Far from it. Sam's ability to endure her situation is astounding. How, we ask ourselves, is she still sane? Here is a person who has gone to the ends of the earth to help herself. If only those in a position to help would listen… before it's too late.

Allison Price's direction of this show is the kind that makes me never even want to attempt to direct a show again. I could do a dozen shows and never produce such a commanding performance. Nothing about this performance should be altered. Every choice was clearly made with care and astute attention to detail; every component, from the "stage" to the "props" to the expert use of the space to create a world we hope never to visit—all of it was carefully curated and resulted in an unflinching, uncompromising performance that sent chills down my neck. I'm still getting them as I write this.

I had gotten the door of my car to head home, shaking my head and just saying, "Wow." I decided that I had to go back. I had to shake their hands and ask some questions. "They" being Abby Ferree, Allison Price & Jonah Fujikawa, who collectively wrote this piece.

"That was one of the best performances I have ever seen," I told Abby. I stand by that. "You're amazing," I told Allison, and I regret not finding better words to congratulate her and the rest of the group for an unforgettable and transformative experience.

Bottle Alley Theatre Company, specialists in "found" theatre spaces, put this work into a boarded-up back porch that in the heat of the night already feels like a prison. The confined space has a handful of chairs to one side and along the wall, and when you enter, tentatively, a woman is huddled on a pallet on the floor, a laptop turned away from the audience sending fitful lights across her inert figure. From it, random dialogue or chatter, barely audible, reaches no one. 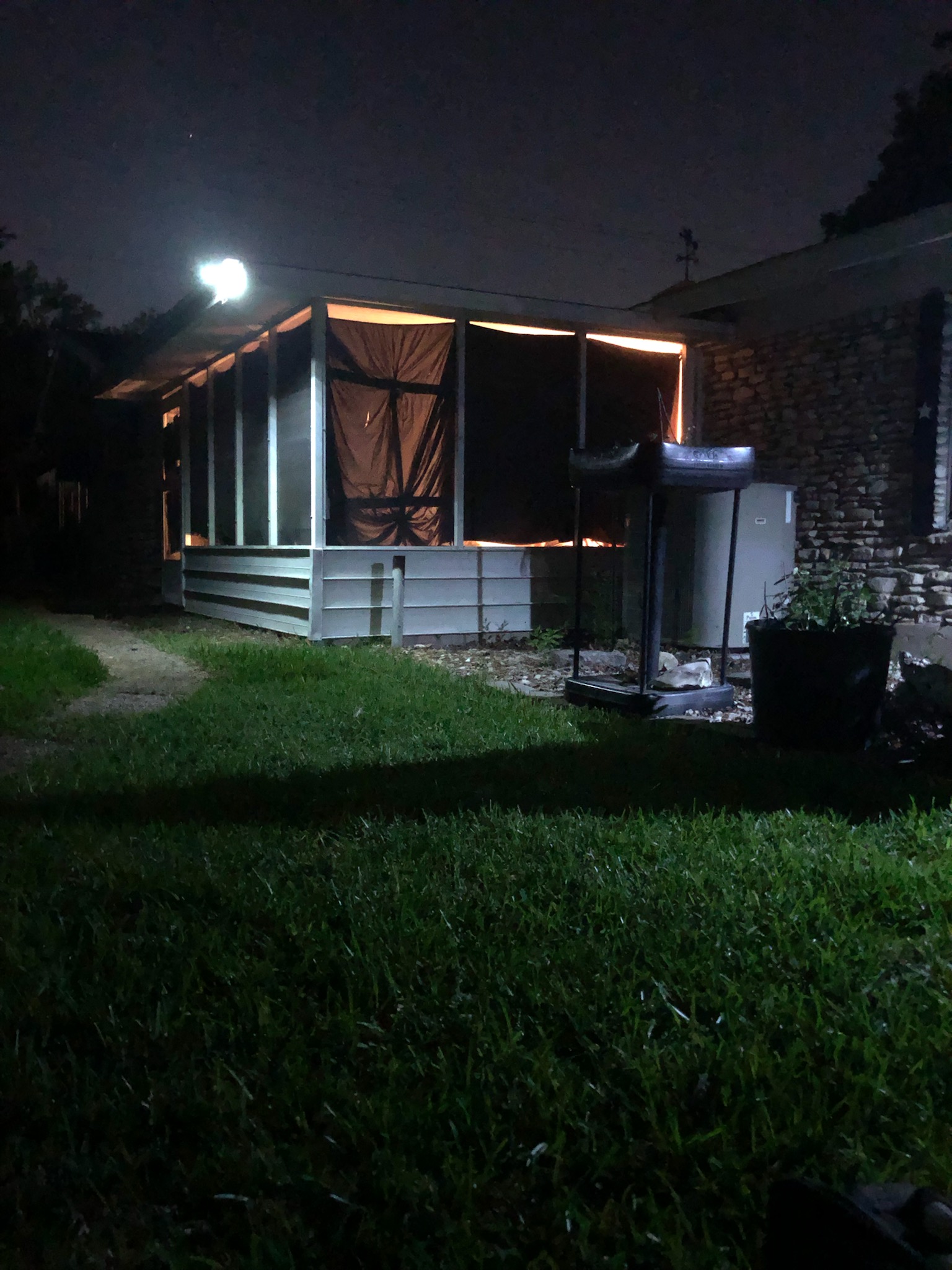 Once Sam rouses, she mutters to herself, moves around restlessly, switching lamps on momentarily and then extinguishing them to cover us and her in deep darkness. There's no ventilation to speak of, and during the hour we spend with Sam, the place becomes increasingly stifling, in harmony with the tale of stalking and terror that she unfolds. She becomes more and more agitated and angry. This guy spotted her where she was working as a barista, and for three long years he has been following her, trailing her, intruding into her personal space while she's away. This is the subtle but evident terrorism of a constant menace and presence that have taken over her world.

Three times she has gone to the police, who've shrugged and done nothing.

Before ten minutes have elapsed in this space, the fourth wall falls away. Abby Ferree tells the story directly to us, meeting our gazes, challenging us to believe her even though the police have not. There's a slowly building crescendo, during which we males in the audience become stressed and bewildered. Are we, as men, collectively responsible for the torment of this woman? Her story is terribly disturbing, a deep plunge into despondency, one that refuses to give us a feel-good resolution. It takes a strong stomach to absorb such injustice; it takes a strong actor to shake us so severely without—quite—physically grabbing us. Ferree's desperation is unrelenting and Price's direction makes sure that we understand it. And then Sam picks up that metal baseball bat . . . .

This piece will scare you to death. Not with haunts or spooks, but with the evil of which arrogant men are capable.

A League of Her Own
by Abby Ferree, Allison Price & Jonah Fujikawa
Bottle Alley Theatre Company

Thursdays-Saturdays,
May 12 - May 28, 2022
private residence
to be revealed
Austin, TX, 78700
Thursdays - Saturdays, May 12 - 28, 2022
Location: 901 E Applegate Drive, Austin (click HERE for map)
Parking: Street parking
Venue instructions: The entrance is through a side gate around the side of the house. Look for signs that say “A League of Her Own”.
Doors close at 8:55 pm
Show Starts: 9:00 pm
Ticket $12.24 via Eventbrite
Link for tickets: https://aleagueofherownaustin.eventbrite.com 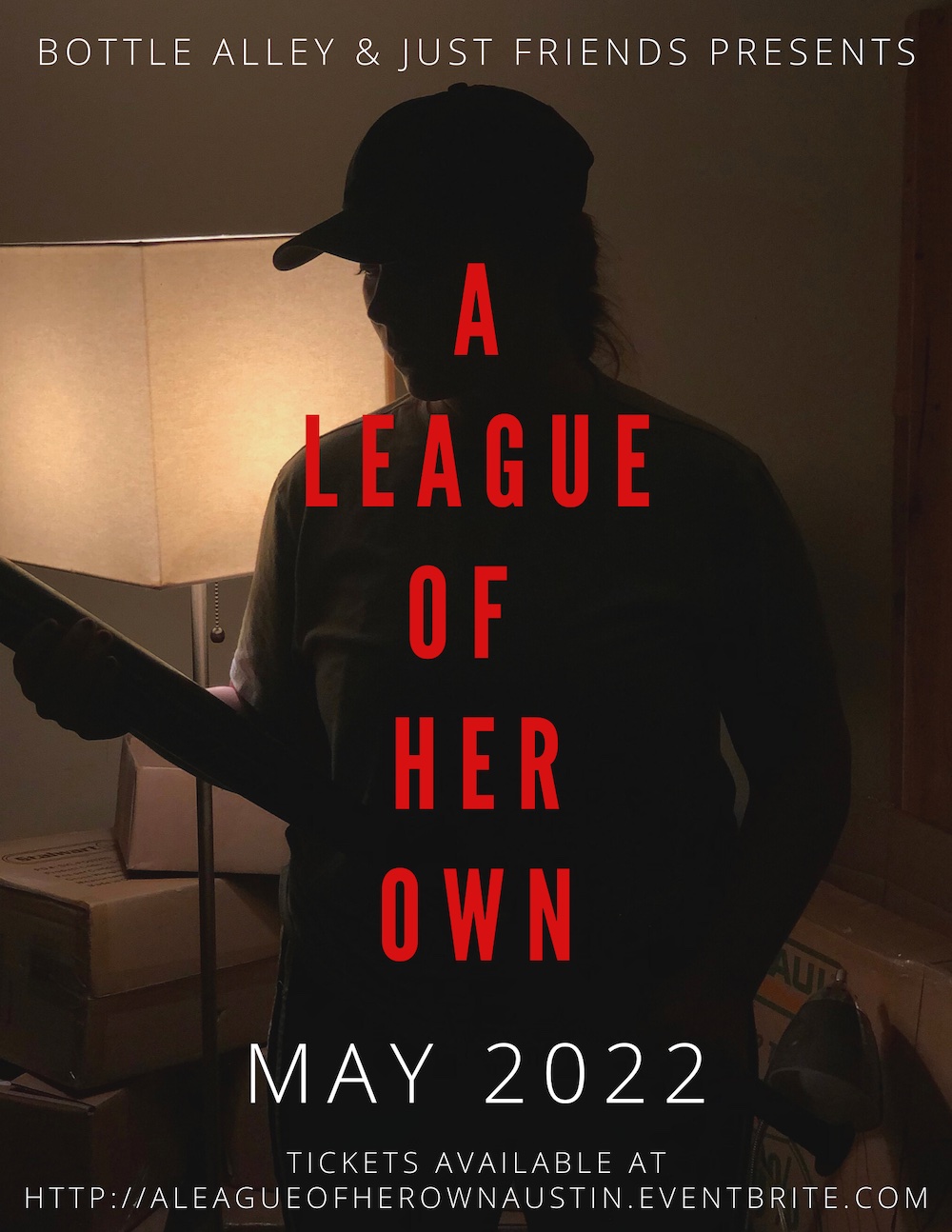