Review: Terminator, the musical by Fallout Theatre
by Rick Perkins 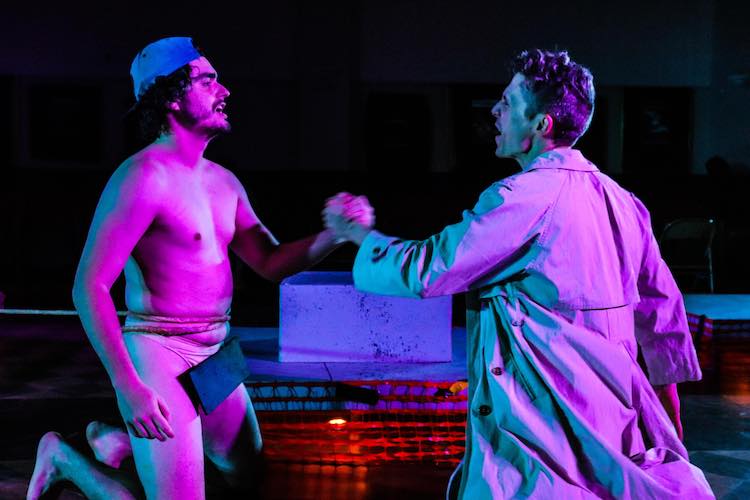 There’s a headline for online hits.

I’d give huge Kudos to the clever costumes, but where to put them?!

Standing outside the very well named Hidden Room Theatre last night waiting to get in, I listened to dozens of people who were down right giddy about seeing this campy fun over the top musical gem. Several had already seen it and now brought large groups of friends.

Those are the honest critic’s opinions and social media postings any producer wants to capture.

That’s free promotions selling out your shows for the entire run.

If tonight’s raucous sold out howling crowd is any indication,

this is a playoff Winning hole in one at the Masters Golf Tournament.

The Fallout Comedy Theatre right downstairs knows how to get laughs,

and pack houses with their loyal fan base they’ve nurtured for many years.

Talking with several of the very talented actors afterward, this is the third edition of the show,

the Fallout folks have presented.

This version is a much grander scale and quality, and is ready for it’s close up now.

Out of the gate, when they handed me their ‘show program’, a Blockbuster Video membership card, from 1984, I thought, “oh boy, this is gonna be fun!”

Their QR code on the back has all the particulars; luckily a kind millennial lady showed me how to access it, as my 1999 Atari flip phone doesn’t have a camera nor internet.

I’m Not giving up the $20 a Month dial up plan, America Online!

These funny folks were having as much fun as we were. From the opening moments when the Trio of singers/dancers came bopping out engaging us right from the downbeat,

the energies in this hidden room leaped into high gear.

The Greek Chorus of very funny ladies kept the action moving and tossed out sly asides on every entrance and exit.  The entire ensemble is featured very well and all brought their A game.

I’ve been in this space several times seeing the brilliant works Beth Burns produces there, in this ancient Masonic hall of mystery.  Never have I seen the space utilized so well, end to end, corner to corner, with nary a square foot of unused terrain. 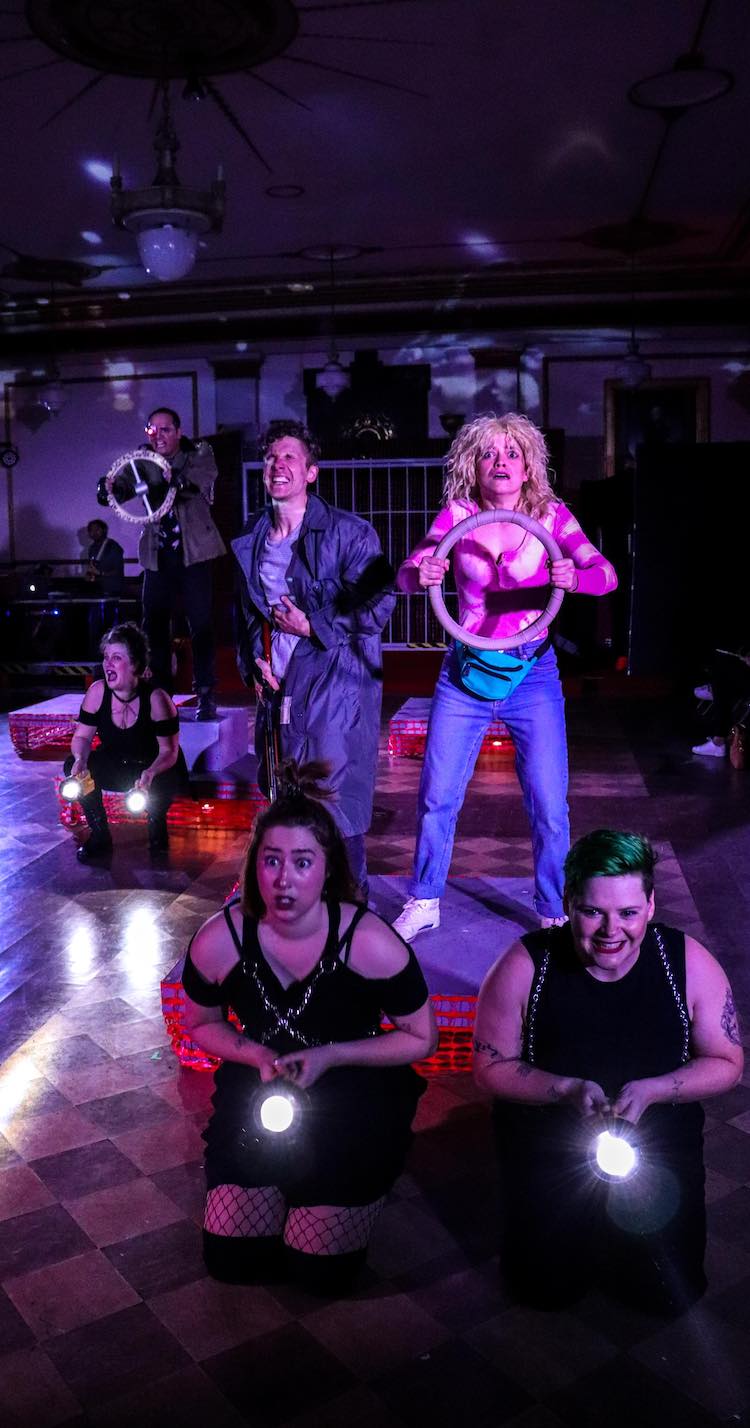 She staged scene shifts with quick clarity and abiding aplomb.

Ms. Bietz called on her former theater professor in Minnesota who drove his light trees down here and designed highly original multiple uses of colors; looks and moods out of these rather simple setups.

I’m amazed he shaped that many contours from his inventory of limited lamps.

All the performers used every level of the playing areas throughout the huge space.  Each end served the story-lines and facilitated well executed scene shifts. Cleverly hiding props and costumes in plain sight allowed for lightning fast changes; adding to the magic of live theatre.

For these reasons alone, you should book your tickets online now. This show deserves to sell every seat in the house.  It won’t surprise me if they extend or add shows in the run.

Having never seen the movies this clever campy romp is based upon, didn’t affect my enjoyment a bit.

How lovely to hear a sold out house roaring their approvals at every laugh line and at the exhaustive physical comedy displayed with so much passion and commitment.

Several times the crowd exploded in applause breaks, similar to a stand up comedy show. Hanging on every punchline, and there were tons of jokes; sight gags and dated references played to the hilt. 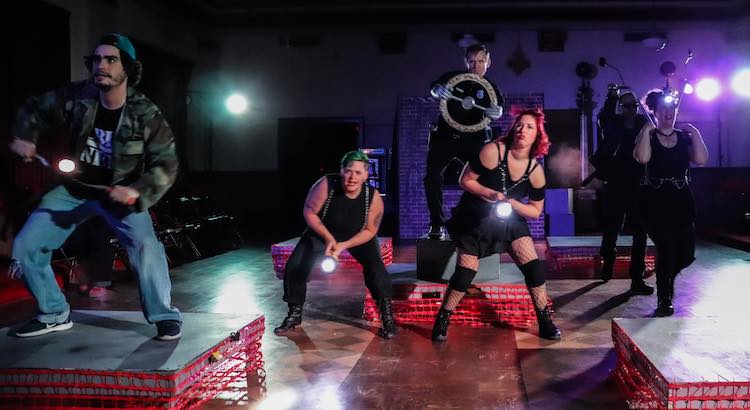 Act 1 covered the first Terminator movie, with Act 2 paying homage to the sequel.

Clever word play abounded for all the broad characters; along with intricate well placed commentaries in the clever lyrics to catchy tunes.

“Who in the name of James Cameron is that guy?!?”

Composer Mars Wright even stepped into a role late in the show, and prospered.

“Give me my Credit” is a keen commentary, exhibited fully.

Choreographer Maci Truax demands serious praises for her innovative moves and dance sequences through the spaces. The cleverness is so integrated, I have a heaping bucket of lauded laurels to share, wondering who gets them:  the choreographer, the director or the actors?

Costumer Tanya Olalde is a talent we want to see again.

The Universe is Abundant; share the well deserved Wealth of Riches. 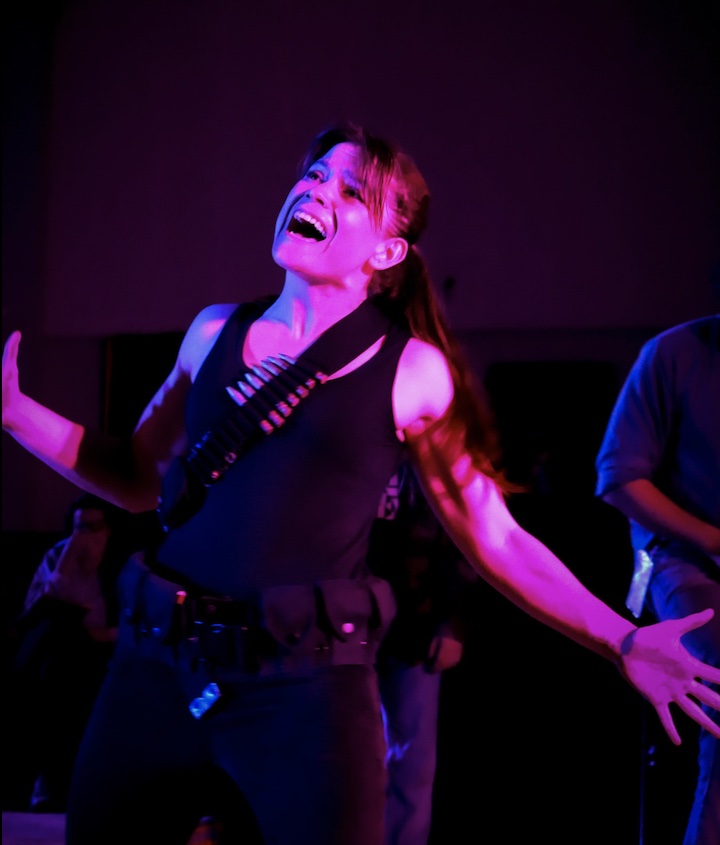 Robert Slack commanded the Terminator with powerful tranquility.  Stoically gleaning subtleties out of this broad over the top laugh fest.  Many times I thought we were watching a new Mel Brooks show. Filled with one set up and punch after another.  Deadpan deliveries and physical commitment to the cyborg body language was top notch.  I’ve seen his wrestling antics a few times in other venues.

Ms. Lena Long played Sarah Conner, the female super hero earth woman we all love. Her comedy background and musical theatre chops were on fine display this evening. She carried the show end to end, with a fine character arc displayed throughout. She alone is worth the price of the tickets.

Kevin Anderson as a hilarious bartender intent on getting the front rows smashed on his exotic elixirs;

or as diabolical Dick Psychologist intent on insanity played to the hilt; and especially the T 1000 played by Robert Patrick in the movies. The brilliant costume pieces were divinely inspired.

His physical comedy moves and commitment to the moment is a free acting lesson you should attend.

His focused determination to being here now, is award worthy.

I wont reveal the brilliant parodies of the movies they packed into every scene.

You really should treat yourself to this one.

This is the best kind of theatre you can see.

Very impressive on so many audacious levels.

Held together by masking tape and C clamps; with a budget well over $85.

Anyone can dress up a set with a beefy budget.

Few can provide the bountiful beauty of creating everything from nothing.

The Improv musical comedy background combined with the ‘Yes and’ attitude adds up to a sure fire hit for these fine fallout folks. 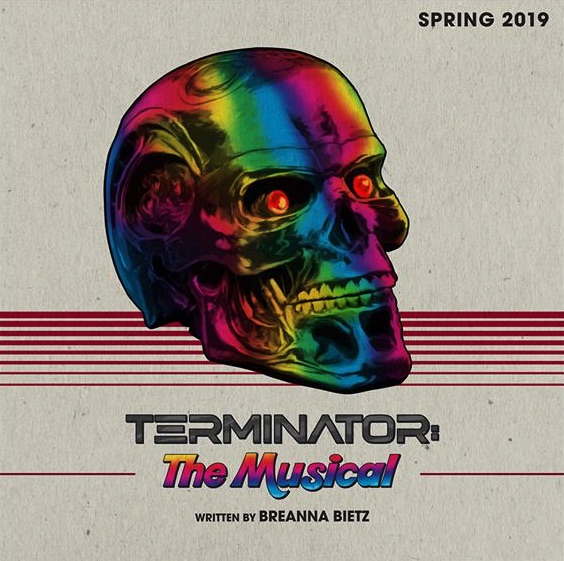 Fallout Theater is a live comedy venue and training center in the heart of downtown Austin, with shows 7 nights a week featuring long-form improv, sketch, and stand-up. Established in 2018, …