If one were to measure the success of the Georgetown Palace Playhouse Stage’s production of Greater Tuna only on “laughs per minute” - an old goalpost-setting comedy adage and one this show typically boasts with pride - the performance I saw last week would already be a huge success. From the moment the lights dimmed and the voices of Thurston Wheelis (Rick Felkins) and Arles Struvie (Kirk Kelso) of “Radio OKKK, broadcasting at a big 275 watts” began crackling overhead, the audience rarely caught a breath.

Greater Tuna has been a staple of Austin theatre for nearly forty years. What started as a dinner party entertainment piece morphed into an Austin theatre production that demanded a second run, and quickly caught the attention of the national press. This led creators Jaston Williams and Joe Sears to New York, HBO, and even the White House to perform this biting send-up of right-wing ideology and rural southern holier-than-thouism. Needless to say, Kelso and Felkins had big heels to fill.. and boy did they. 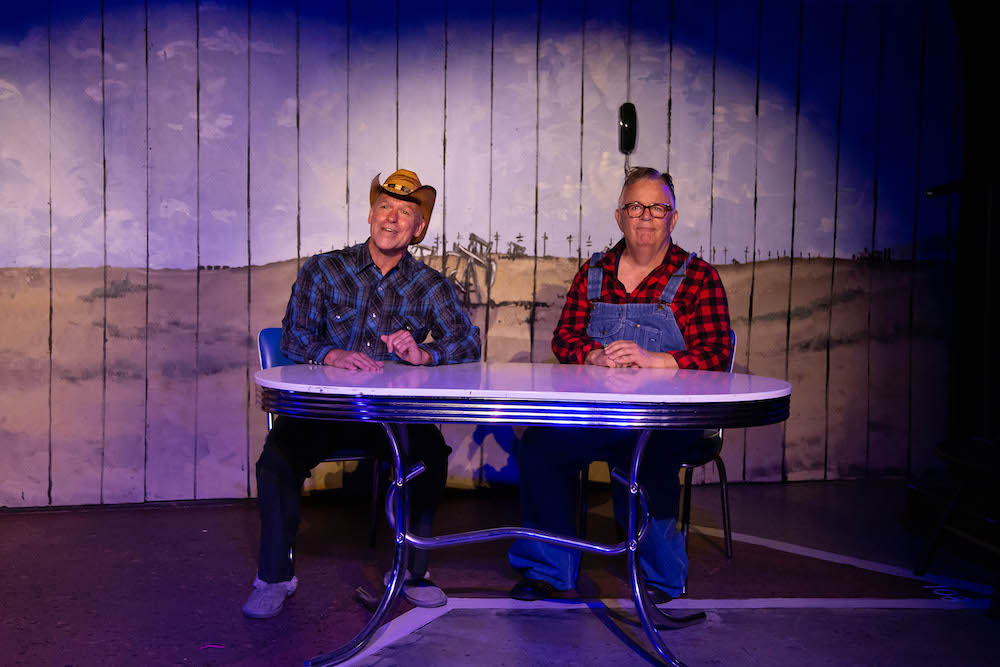 Tuna is an ensemble piece… performed by just two actors. Some twenty or so characters make an appearance, and in this performance each of them is given animated life by Kelso and Felkins. Characters run the gamut; a dog-poisoning mama, Pearl, who’s had enough; a preacher who eulogizes in a seemingly endless array of cliches (“He was a jolly good fellow… which nobody can deny!”); Pearl’s daughter, Charlene, who’s desperate for a cheerleading spot she has no chance in hell of getting; Vera Carp, the town busybody whose acerbic quips always find an ear, living or dead.

There’s more. Many more. And each of these small-town caricatures is played with enthusiasm and spot-on comedic timing by Kelso and Felkins, who shine brightly in every role and seem overjoyed to be on stage. These are stellar performances by two actors giving their all, and I could do little better to describe how damn good they were than to mention the stomping feet and teary eyes around me from lights-down to lights-up. There was one guy… only one, sitting in the front row with folded arms with a sour look on his face. Bad day, maybe? Everyone else was in stitches.

Any production, however, is the sum of its parts. It’s one thing to talk about the amazing performances of the actors, but much needs to be said about the components that made those performances possible. 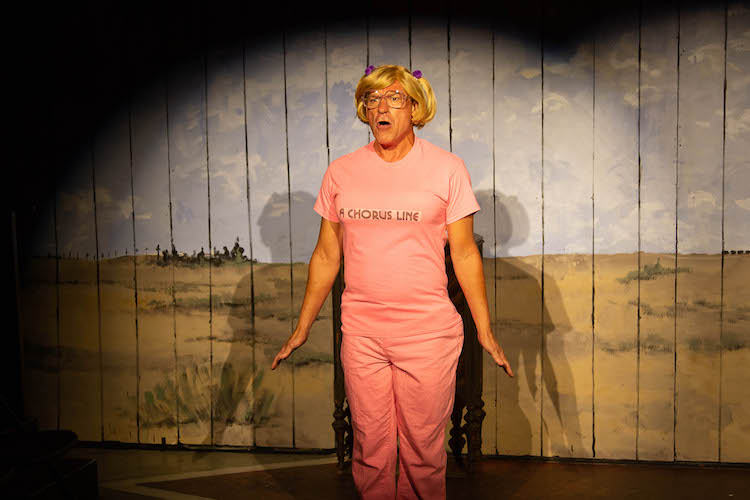 The sound in the Palace’s take on Greater Tuna is outstanding. From the crackling audio of a low-power radio broadcast, to the on-point musical interlude choices (Ray Stevens and a squirrel loose in church? Yes, please), little exemplifies it better than a mid-show transition that saw overhead sound seamlessly transition to a glowing tube radio propped against a wall. It’s subtle, but the fade was flawless, and our direction naturally fell to the radio, buzzing and muffled. That kind of theatre magic goes unnoticed most of the time, but it’s the kind of attention to detail that suggests the folks behind the scenes are passionate about not just putting on a good show but putting on a great one.

The Playhouse Stage is a very intimate black box theatre, quite a different space than the large main stage where the musicals are performed. Any black box is only as good as its production team, and in this case the stage and lighting design were fantastic. Intricate and impeccably timed lighting carved defined spaces from the otherwise minimalist set, making the cozy space feel far larger than it is. Each character had a space to own, with monologues often delivered within arm’s reach. This made for a surprisingly immersive experience, especially when Kelso’s show-stealing Vera Carp took a moment to lob her thinly veiled insults directly at people in the front rows. (“Pick me next!” I thought, inwardly).

The crowd was buzzing as the lights went up. Just about everyone took the time to congratulate the actors on a great show, and they were kind enough to return thanks. The audience’s gratitude seemed to extend beyond simply being glad to be back in a theatre again, maybe (just maybe) finally past the disruptions of a global pandemic. Their gratitude was that for two hours a great performance made them forget it had ever happened.

I saved this bit for the end, as it needs to be said, but I wanted in no way for this commentary to take away from the Palace’s success with Greater Tuna. That’s just an objective success for all involved. So, don’t mistake me here. Please.

My only concern with the show is with the script itself. One thing that continuously crossed my mind while watching this show is this: I have to wonder, is this show still doing what it was originally meant to do?

The content of Greater Tuna is pure satire. This is Texas, and we all know people like this. Hell, we’re probably related to them. We know people like the man who wants to make the town a better place… “for the right kind of people.” We know the gun-loving Southerners who would gladly take Didi at her word that if her guns “don’t kill it, it’s immortal.” But there’s something missing here.

It’s one thing to lambast the anachronistic mindset of bigger-than-you-think rural Texas, but I am left wondering if the satire in this show could easily be lost on some audiences. While the biting commentary comes fast and often, what the show is lacking is an arc. It’s a series of vignettes, sure, loosely tied together with common threads, but even so the characters here don’t grow. There is no moment of catharsis, no “aha” moment. That’s missing, which takes some of the sting out of that bite.

“Do you know if they changed it?” I was asked by the audience member to my left, a woman from the panhandle who’s seen the show many times. “It seems they updated some things to be more…”

Maybe that’s my issue. While the show is hilarious, to some I fear it may simply be “funny because it’s true” and do little to inspire the reflection that satire demands. Is it now doing more to normalize this kind of thing for some folks than to criticize it? 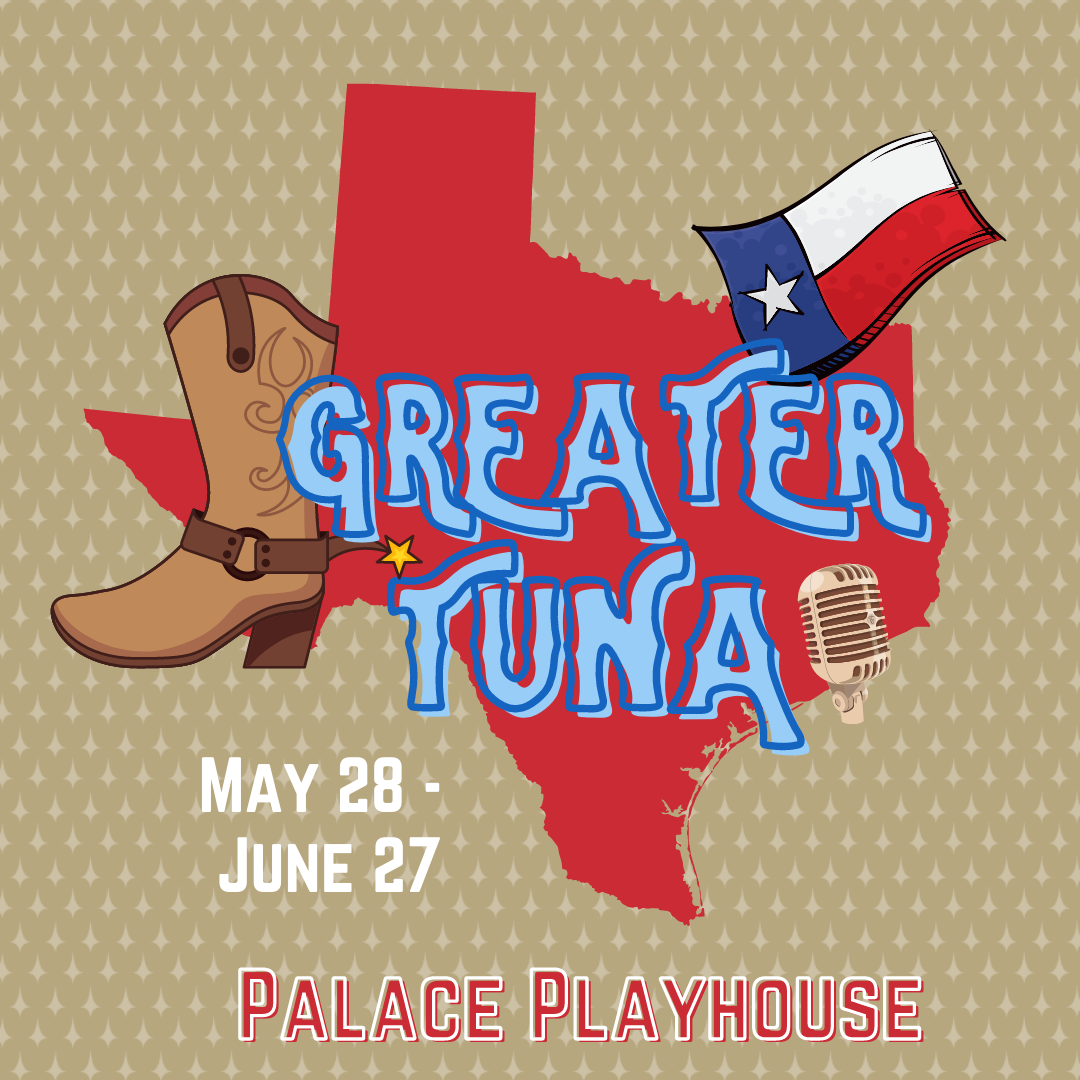