The Austin Dance Festival, 2021 edition, was a triumph of bootstrapping. The 2020 edition was canceled when Austin and the world lay in the destructive grip of the coronavirus pandemic. This year the Kathy Dunn Hamrick Dance Company, producer of the festival, had to reset all the organizational devices necessary to produce a live show with multiple artists. The job was especially hard for not having produced any kind of public performance for a year and a half, except as noted below. But the work proceeded to completion, and the results were presented on May 29, 2021, at Pioneer Farms, the large indoor and outdoor performance venue in suburban northeast Austin. A large crowd of dance fans filled the city block square formed by historic buildings positioned on the site. The crowd celebrated the return of dance to the world. The crowning event was the presentation of the feature length Dance on Film video on the drive-in-theatre-sized Rocket Cinema inflated screen tethered like a zeppelin on the edge of Moody Meadow, about a block from the square.

The first great strength of the combined live and video festival was that it was live---masks off or optional. The second great strength of the production was its pastoral setting. The landscape of Pioneer Farms with its historic buildings, greenery springing to life, and longhorn cattle grazing in the meadow gave spectacular backdrops and set designs for the individual pieces. The live Austin performances stood up well to the Dance on Film selections with their location sets and frequent use of drone photography. Performance at the end of a sunny day took advantage of a slow sunset which painted the clouds with fluorescent colors that faded to pastels as the sky darkened to movie time. And of course the stars came out. All agreed that Nature took the prize as the most talented performer. No further reasons are needed to live in Austin.

A tradition of the Austin Dance Festival is its invitation to dance academies to showcase their work. This year was no exception. The  dance students participated in the first event of the show, the “Master Class for Youth.” They filled the square of the village, centered on its gazebo. These students are the future of dance, starting right now. Sarah Starkweather, a national leader in improvisation and teaching., led heir exercises in movement and acting.  The large group exercises were dance in their own right and well appreciated by the crowd. Participating were Capital City Ballet, Dance Discovery, Studio 29 Company Dancers, and Synergy Dance Company. 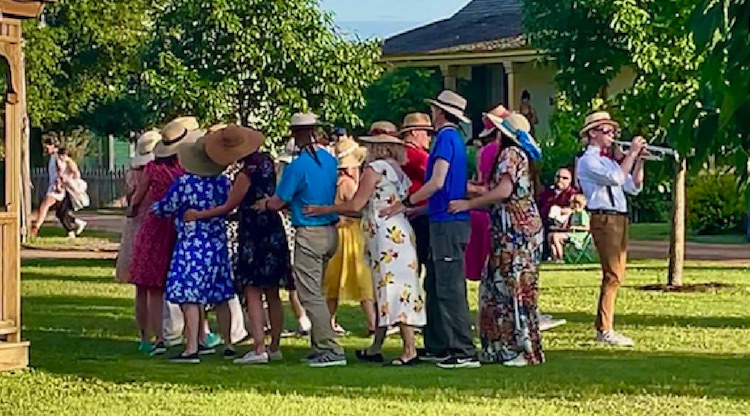 “Summertime Parade” kicked off the professional performances. A group dance choreographed by Renee Larson and Carol Lewis, it was an invitation to witness the remaining dances on the porches, terraces, and grassy lawns of Pioneer Farms. Performances had overlapping time frames, so that a single reviewer found it impossible to give eyewitness testimony to all the pieces in the grand event. Highlights the reviewer caught are described here. Artists and pieces not mentioned are no less worthy.

Blipswitch leaders Taryn Lavery and Alex Miller performed their modestly labeled “untitled #1” on the Fisk Building porch, a wooden surface fronting a partially reconstructed historic double-pen log cabin. Exposed logs created a backdropof great horizontal, rough texture to the dance and also filtered the slanting rays of the sun into and out of the eyes of the performers and audience. When the dancers moved to the street corner with its unfiltered sunlight coming from behind them, they dancers fell into silhouette, seemingly into darker or perhaps softer moods. As they danced back along the log structure front, the logs and lighting combined to suggest a more fractured or fragmented mood. But what about the movement itself? These girls are joined at the brain waves. Blipswitch seems to be trademarking unison phrasing, with the performers entering and leaving unison movement without any apparent cueing but enacting several smooth and flexible phrases one after another. Lavery provided accents, employing her athleticism to descend flexibly to the wooden porch to hold sculptural shapes framing brief solo passages by Miller. Blipswitch’s continuing exploration of movement is well deserving of larger followings. 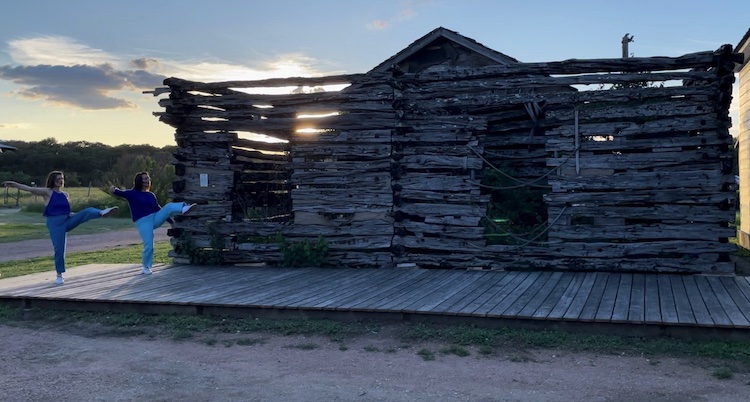 The Body Shift Collective continues to give masterful performances that strike to the heart of existence and throw its audiences into profound contemplation. The dancers are differently abled along differing dimensions. The three performers in “Three of a Kind,” Susie Angel, Juan Muñoz, and Tanya Winters, are all based in wheelchairs, but that, besides providing a technological media contribution seldom considered in dance, gives a few surprises of its own. In the human movement component of the piece, the arm and leg movements seemed surer and stronger than this reviewer has seen in previous Body Shift performances. Muñoz’s holding and lifting duties were carried out with confident power. Above all, the joy on the faces of the performers at being on stage was immense and inspiring to all the ordinarily abled performers around them. 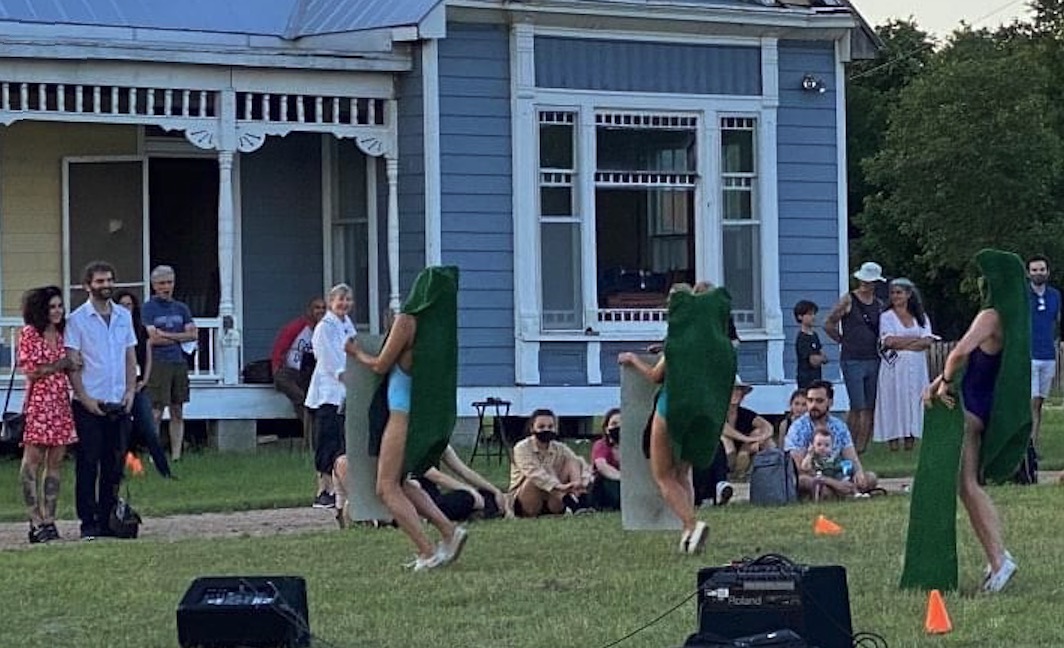 Frank Women, “The Frankies,” performed a piece titled “grass.” They wore Gumby-like mats of sports turf front and back with hornlike headdresses of the same material. The sides were open, under which the performers wore pastel swimsuits. Off to the side, a pile of faux grass hid Walter Nichols providing the live soundtrack. The performance was electric, rapid, and reliant on the gymnastic skills of the dancers, Alexa Capareda, Erica Saucedo, and Kelsey Oliver. The high energy dance verged on performance art but stayed within the realm of dance, showing immense skill and dancing with intent the whole time. And what was the intent? They gave a clue in their program notes: “We are grass. Believe we are grass.” Never has such a prosaic theme received such a thorough and skilled treatment.

The Kathy Dunn Hamrick Dance Company took pride of place in Moody Meadow immediately before the start of Dance on Film. Performng on platforms set on the grass, the dancers delivered their piece “Entr’acte,” a multidimensional title. The five dancers, Jairus Carr, Cara Cook, Alyson Dolan, Lisa Anne Kobdish, and Carissa Topham stood to the side, motionless in plain view, watching, then took turns stepping onto the platforms and dancing sharp phrases of contemporary dance, extending them enough to exhaust the audience. Then the dancers would step off the platforms and another combination of watching dancers would step onto the platforms and dance. Repeat sharp, athletic dance phrases to the end of the segment. The platform format of the staging and the yellow and ultramarine blue color theme of their costumes clearly evoked last October’s rehearsals-only dance “At a Distance” on floating platforms on Lady Bird Lake. That innovative concept, almost fully realized, was denied a formal presentation when the city refused to grant necessary permits. This denial was doubly unfortunate because the dance was conceived as accommodating coronavirus protocols by taking place outside on socially distanced floating platforms. “Entr’acte” denotes an interlude between two large acts, and that seems to be the company’s statement with this performance. They were performing a showcase of what is to come for them, maturely acknowledging the wounds of the recent past. As one of the performers told this reviewer later, “We’re still popping the band-aids off our pandemic times.” New works are in the works. “Entr’acte” could have been more colloquially entitled “You Ain’t Seen Nothin’ Yet.”

Since its founding in 1999, KDH Dance Company (Austin, TX) has presented contemporary dances that illuminate everyday encounters and use both substance and wit to transform the mundane into the …