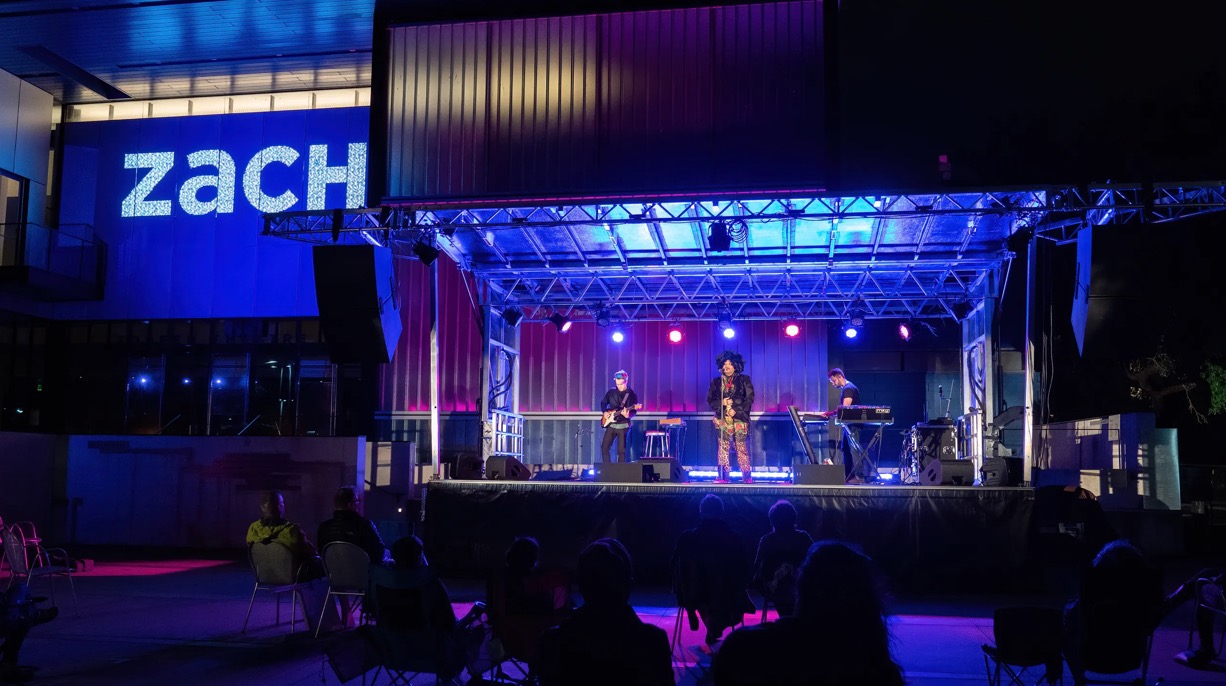 Zach Theatre’s answer to the obstacles of practicing safe social distancing while keeping live theatre and entertainment thriving, Songs Under the Stars continues throughout the spring season with shows till May 23, 2021. The venue has done an excellent job of adopting with an outdoor stage, lighting, and sound systems enhanced by the beauty of the night sky (the clarity of the night sky not guaranteed). The staff and volunteers are well trained and social distancing, and the safety of everyone involved is their foremost concern, from the moment you arrive, to the intermission, to the inevitable restroom respite, to your departure.

The reduced crowd is a unique pleasantry to attendees in that it createsa feeling of intimacy with the performers. Of course, these reduced ticket sales are not good the company’s budget, but the spirit is clearly that the show must go on. Events still to come include Disney through the Decades, Mariachi Melodias de Mexico, and Mixtape Volume Two. 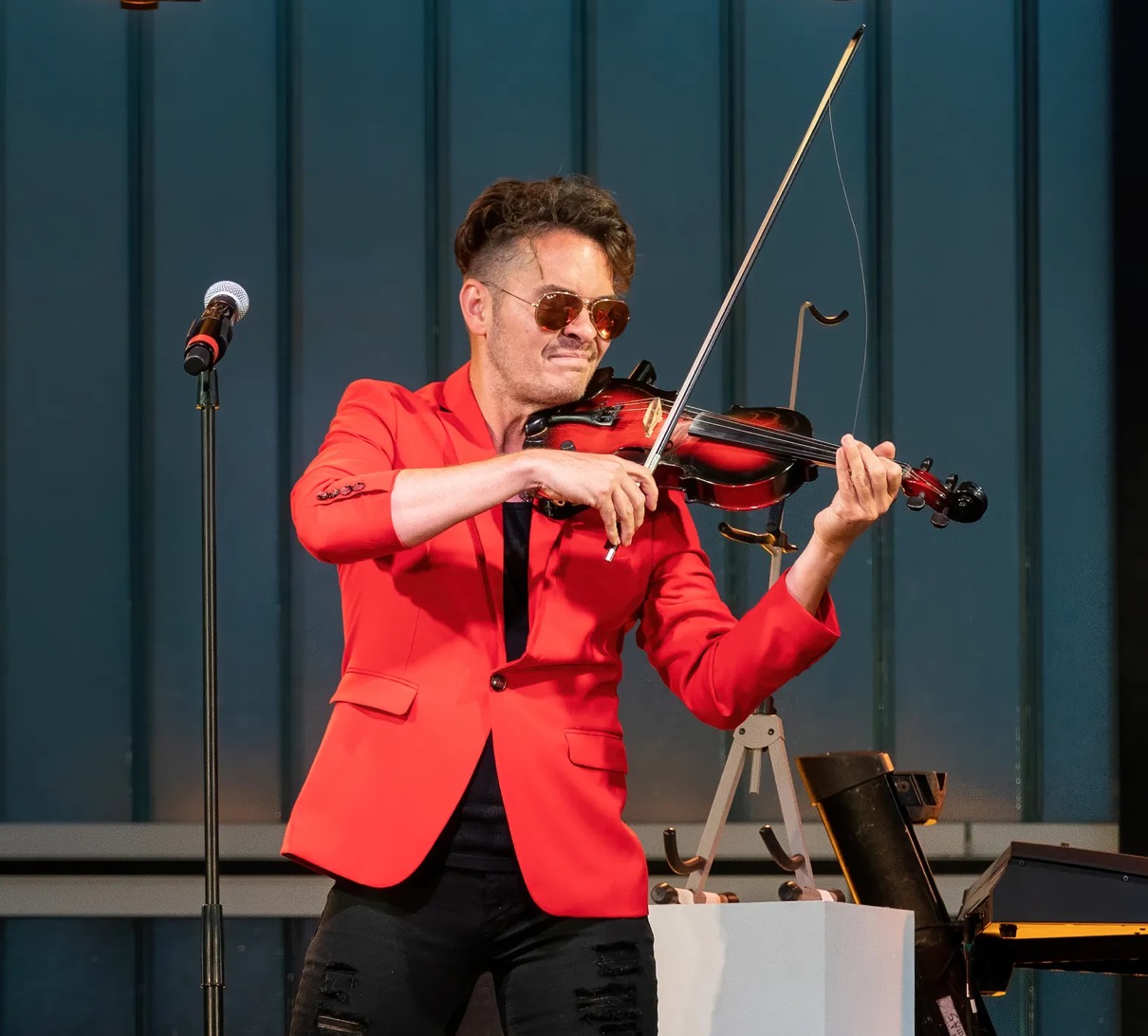 Tameca Jones’ blazing set was opened by Omar Phoenix (formerly Omar Lopez), both a dear friend of hers and a darling of the Austin music scene. Phoenix is known for virtuoso-level violin playing, engaging vocals, and exhilarating stage performance. As an unabashed one-person performance, he presented his own style of music, a high energy fusion of jazz, arabesque, pop, and electronic dance music. With loud pulsing beats behind all the songs, Phoenix brought an incendiary vibe to his personal tales of love, loss, triumph, and his sobriquet’s metaphor of redemption. While the artist has been formerly referred to as being a world-jazz or Latin-jazz performer, the present emphasis is clearly on a dance club vibe that celebrates all the latest decades of getting down on the dance floor from the seventies to the present day. Phoenix was nonplussed by the size of the crowd and played with a fervent energy while singing with heedless enthusiasm. A smoke machine and a lit-up dance floor would not have been anachronistic to the show. The violin solos, as expected, were nothing short of riveting and between song banter was filled personal stories that shined bright with optimism and heartfelt honesty. 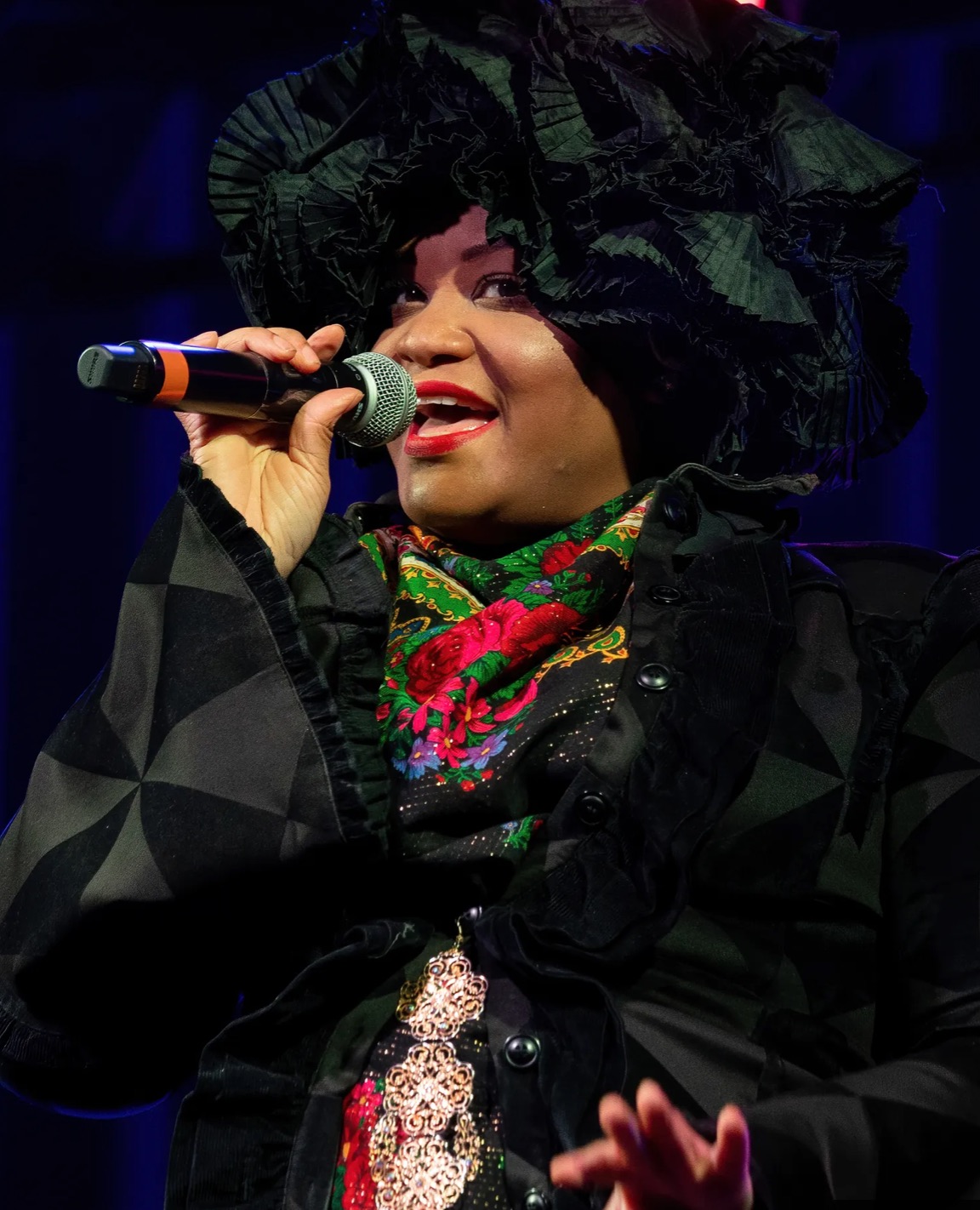 With the appearance of Tameca Jones, Zach continues to show its commitment to showcasing the royalty of the Austin music scene. Jones is known as an R&B singer who gained a fan base from her long residency at the Continental Club Gallery. Her musical influences are clearly diverse including pop, rock, soul, jazz, and the blues. Jones first won over audiences in 2005, as the lead singer of the popular Austin band 8 Million Stories. As her career continued to rise, she gained notoriety for her diverse list of cover songs including everything Jimi Hendrix to Nirvana. She was soon opening for all of the major Austin act including Gary Clark Jr. who asked her to contribute lead vocals to his song “Wings.” She soon followed this with her debut single “Hot and Bothered” which was warmly received. Tameca Jones has established her place in the Austin scene, and it was cemented by her most recent performance on April 16th.

The sky had darkened, and the band came on and began playing, when suddenly the insanely charismatic Jones slinked on to the stage with no introduction like a jaguar silently slipping into your camp out of dark of the night. The crowd erupted, but nonplussed she gripped the microphone and unleashed the “showstopping” voice everyone had come to hear. The guitar playing was a staggered roar with chunky bar chords and light distortion while the keyboard filled out the both the bass and rhythm section. Jones announced in one of her first songs that she was “not like those other softer bitches” and the audience agreed as she swept across the spectrum of genres. She slowed it down to sing a ballad she had written as an homage to all the front-line workers. The haunting chorus promised that though at times things got bleak, “I know there are angels watching over me.” 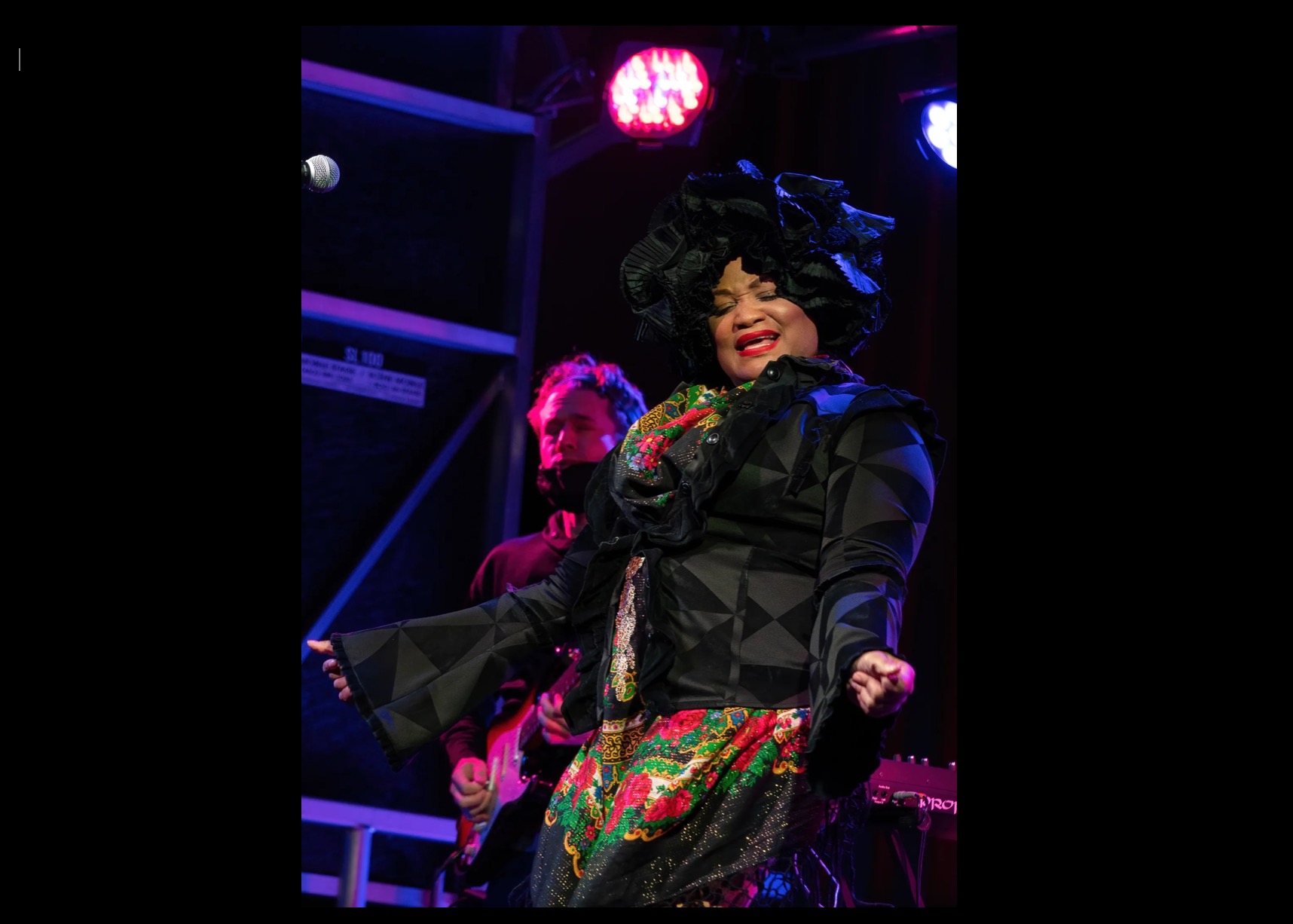 With nearly every song she oozed sensuality at one point declaring “let mine be the name that you moan.” The overall vibe had reached a crescendo of unapologetic churning reminiscent of Quincy Jones work in the 1970’s and the powerful Doobie Brother’s number “Long Train Running.” Then suddenly, the lights changed, and the sounds of the synthesizer boiled up and Jones sang a note perfect version of the Eurythmics’ “Sweet Dreams” with a tempo all her own. She later treated the audience to a new and very vulnerable song where she asked about a new love, “How do I know it is right?” At one point in between songs, she opened up about the challenges of having to live up to so many different personas that were expected of her including bad-ass, alluring, powerful, sexy and while it is clear that she is master of all of them her true self still outshines them all. 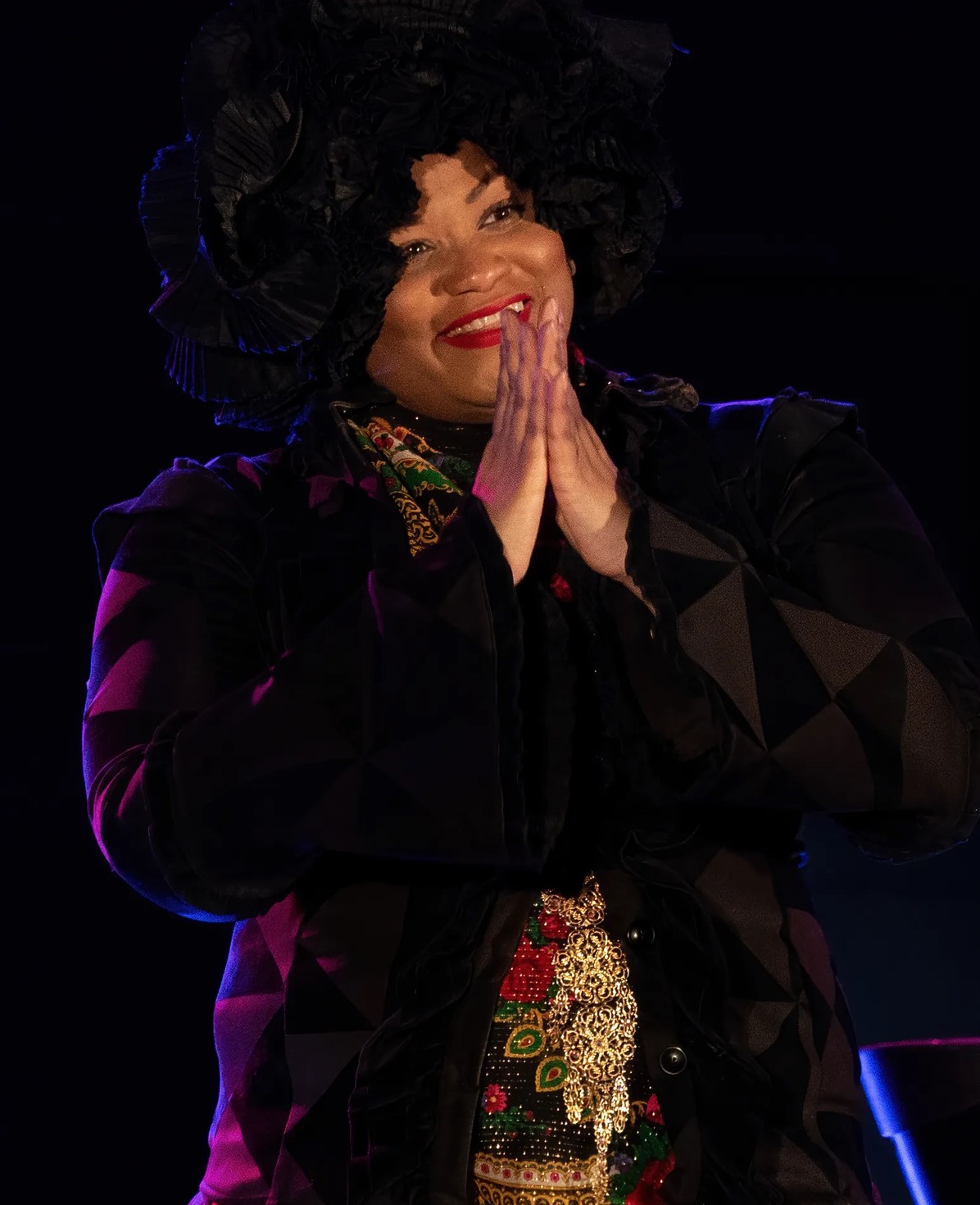