Review: Behind the Scenes -- The Art of the Hollywood Backdrop, Bass Concert Hall, University of Texas to April 18, 2021
by David Glen Robinson

Camille Paglia, in one of her milder pronouncements repeated many times, said that cinema was the dominant art form of the twentieth century. Behind the Scenes: The Art of the Hollywood Backdrop, showing now at the Bass Concert Hall of UT-Austin’s Texas Performing Arts offers a striking, monumental affirmation of that insight. The show is a collection of huge painted backdrops measuring scores of feet high and scores of feet long and all dimensions in between, displayed on the stage with stage lighting front and back for full viewing. Detail paintings of these large works were executed by UT scenic painting students from a few years back as part of their course work. Those student works are displayed separately from the main exhibit and demonstrate that monumental painting in service to movies, theatre, and dance are alive and well in the twenty-first century. 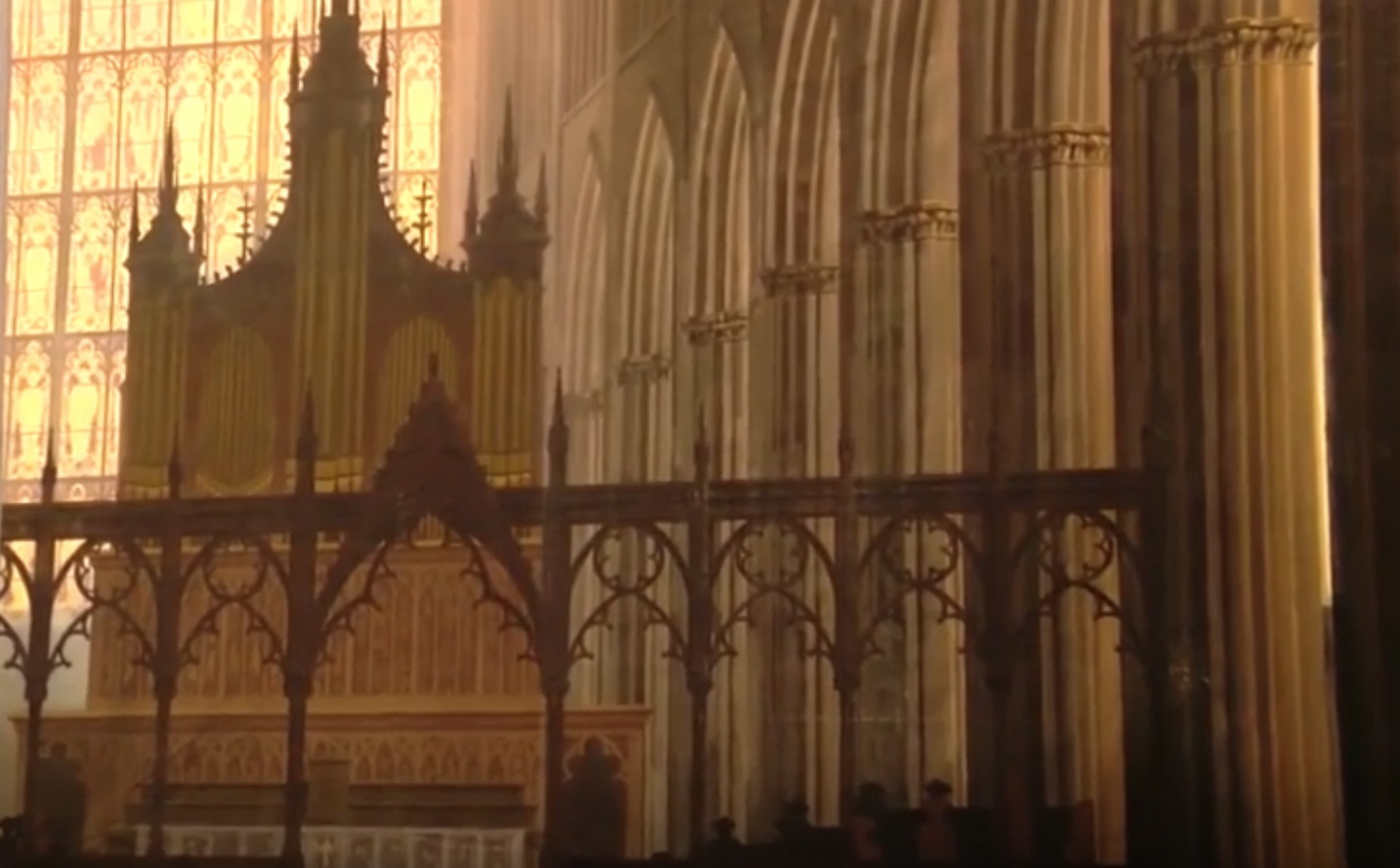 The title of the show is entirely apt, a multilevel pun. The audience enters from backstage, moving behind and in front of the principal works hanging on the immense Bass stage. The orchestra and balconies of the hall are entirely blocked off. And, of course, the giant paintings backed scenes filmed in front of them. Not only that, but behind the backdrops theatrical lighting backlit the translucent sections to create glowing and interactive nightime windows, chandelier lights, sunlight through stained glass, boat lights, and seemingly endless imaginative lighting effects. 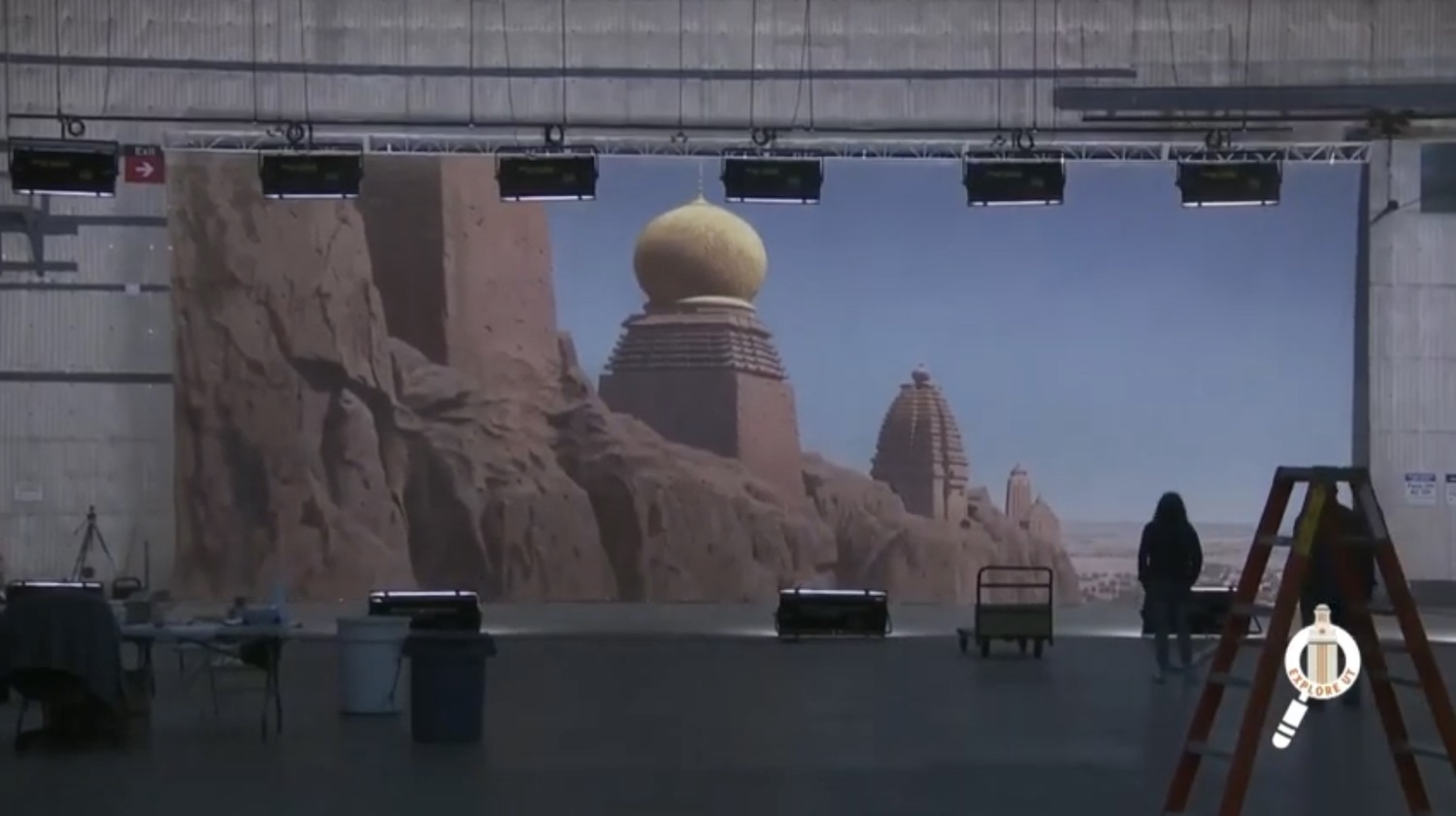 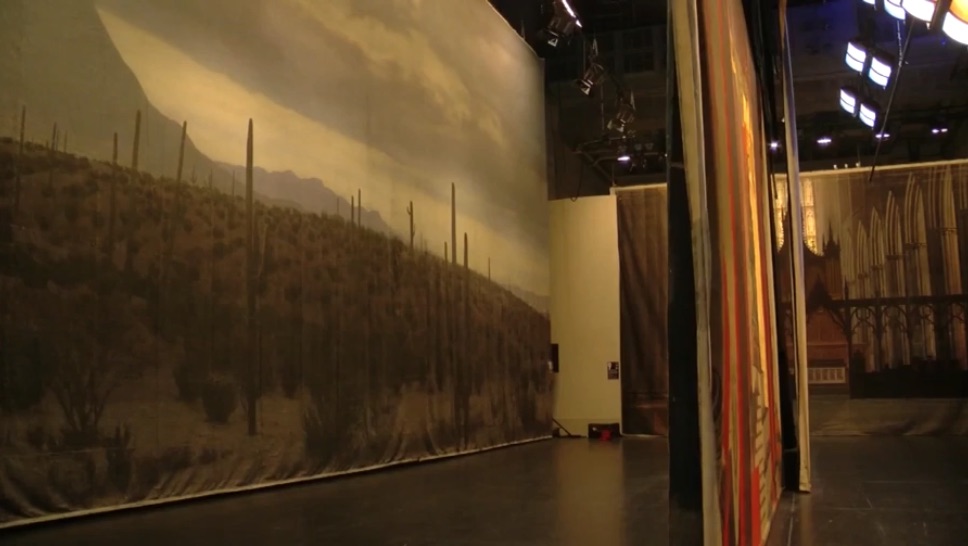 The representational art is entirely mid-century, created for movies produced from 1944 (National Velvet) to 1966 (The Glass Bottom Boat) according to the companion website. But the displayed paintings comprise only twelve of the fifty paintings Texas Performing Arts received in donation from the Art Director’s Guild Archives as part of their Backdrop Recovery Project. That effort netted a total of two hundred and seven movie backings from Hollywood studios. Clearly, new exhibits of this intriguing art could  eventually be in the offing.

Austin is no stranger to monumental backdrop art, but the nature of the artform makes it difficult to see and harder to store. The Austin Scottish Rite theatre on Lavaca Street downtown retains a rare, perhaps unique, set of backdrops painted especially for the theatre in 1875 and still used in productions there. They may be viewed when lowered on cue during a production, merely for the price of a ticket. Zach Theatre is accumulating monumental backdrops, perhaps as are UT-Austin and St. Edwards University drama departments, but their curatorial policies and programs are unannounced. Smaller private theatre companies typically disassemble their backdrops and sets at the end of any production run. 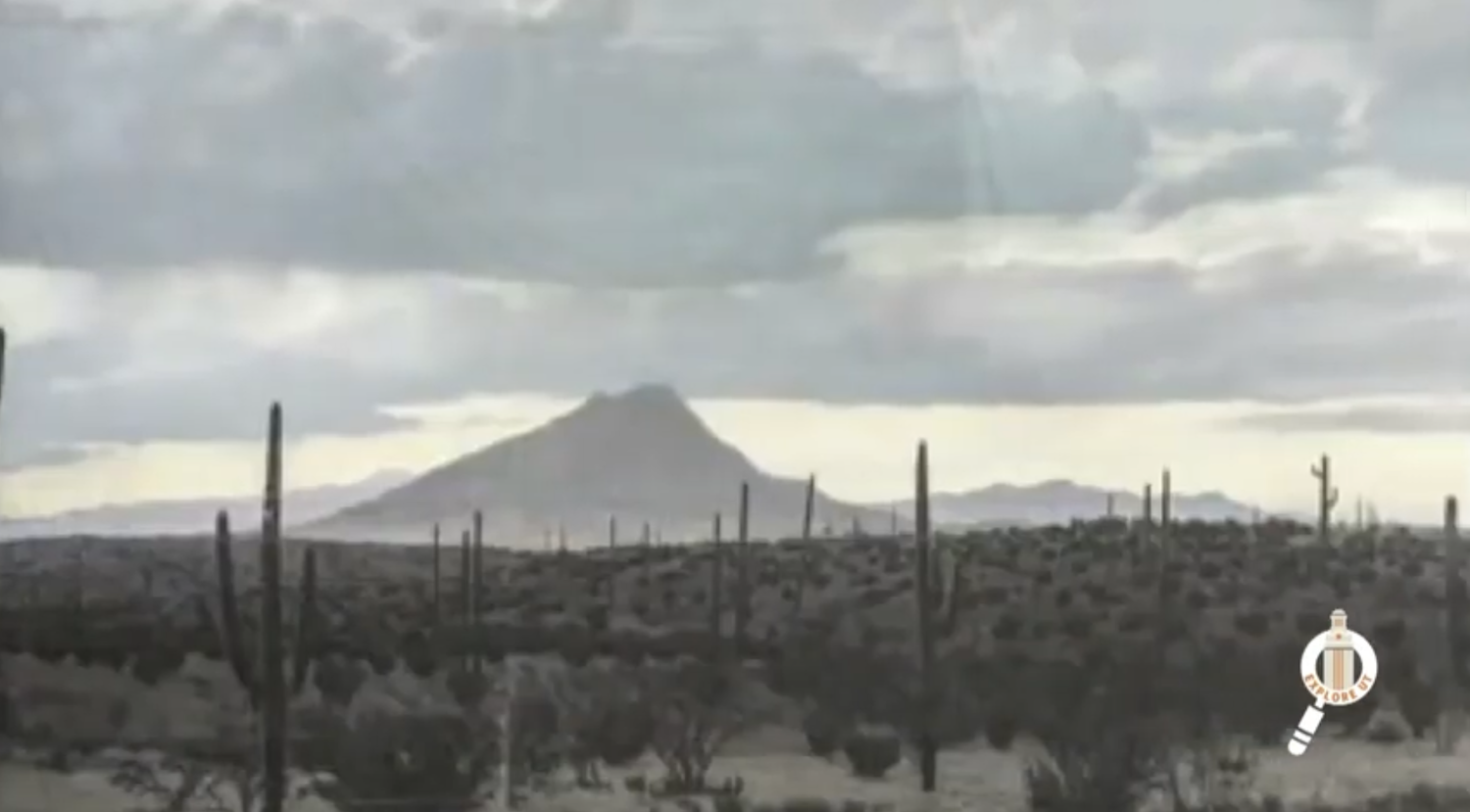 It is to a degree ironic that art pieces of monumentality may also have heightened vulnerability due to the difficult logistics and the forces of change and dissolution. They are huge and spectacular, but they typically die young. In the exhibit, a lighting designer willing to talk to this reviewer pointed out that many of the pieces had been stored rolled up by MGM upwards of seventy years. When they were unrolled and raised, a line of abraded paint, sizing, and linen dust fell in a line along the floor. The painting of the Arizona desert for The Outrage was especially damaged, the principal artistic outrage being cracks and splits in the fabric and flaked-off paint. Thirty feet high and ninety-three feet long, it is the largest painting in the exhibit and a prime candidate for advanced curatorial rehabilitation.

The University of Texas at Austin and the Art Director’s Guild are to be applauded for their willingness and time, effort, and financial commitment to saving, exhibiting, and restoring these rare examples of mid-century representational movie art. Other institutions also gave loving homes to rolled-up Baby Hueys of art and are exhibiting them around the country. The show is curated by the remarkable Karen Maness, the Scenic Art Supervisor for Texas Performing Arts, an instructor in the UT Art Department, a published author of art books, and a founder and instructor at Atelier Dojo, a private arts academy in Austin. 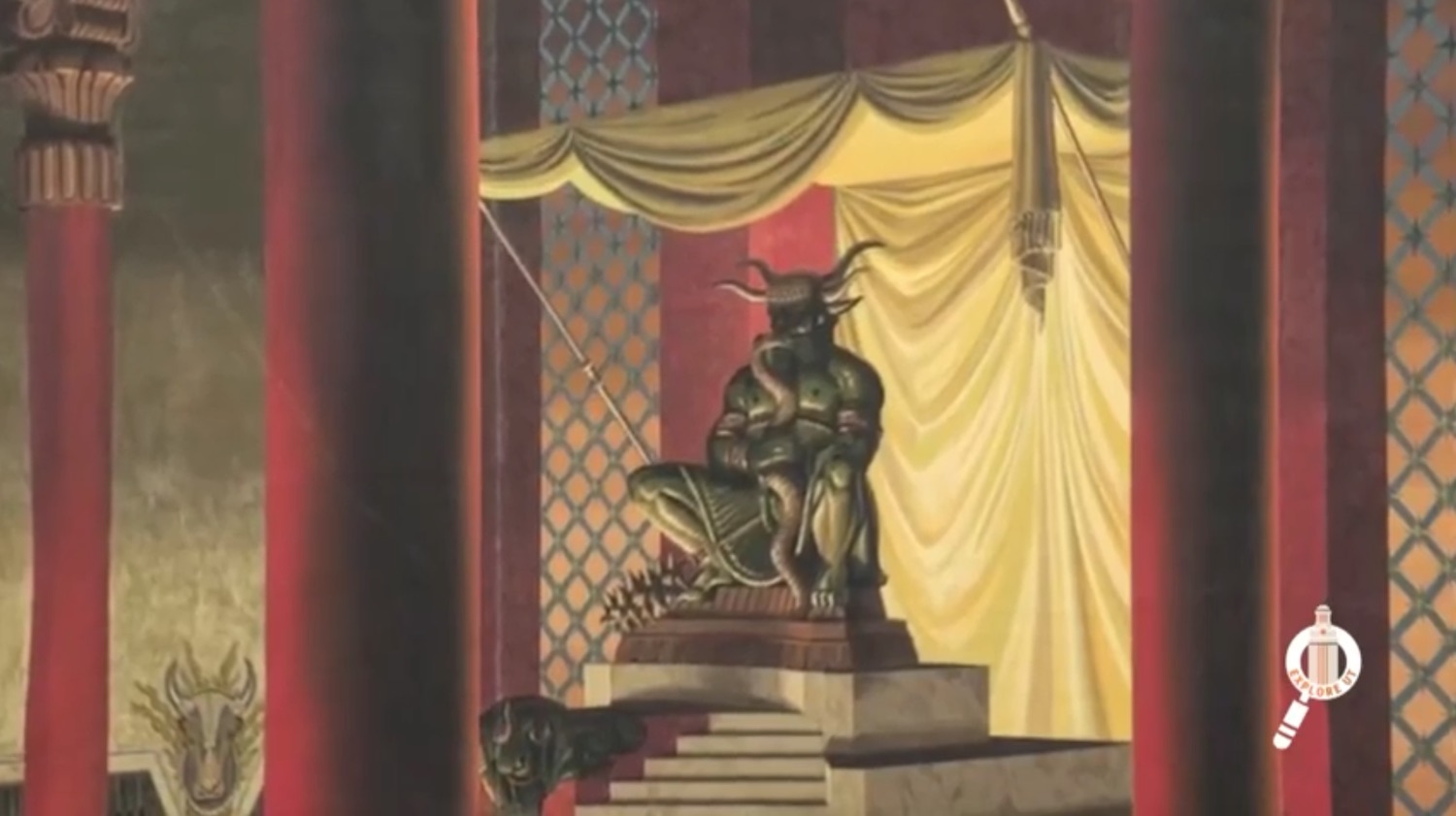 Most would agree heartily with Paglia’s dictum, but how does that translate in the twenty-first century, now that movie imagery is heavily controlled by CGI? Imagery-as-software-programming or, menu-driven creativity? The days of imaginative backdrop painting may be gone. They harkened back to the origins of painting and remind us how all the artistic media came together in the last century to create cinema and craft movies. The cinema form still has the power to invade our dreams, structure our education, serve us, control us, vex us, or fulfill us. The boundaries of other art forms are becoming blurred and indistinct in this century, but  movies, not so much. Cinema was always an amalgam of other art forms, starting from theatre techniqueand incorporating all the other arts at the will, or perhaps the whim, of imagination.

Behind the Scenes: The Art of the Hollywood Backdrop runs at the Bass Concert Hall of Texas Performing Arts until April 18, 2021. 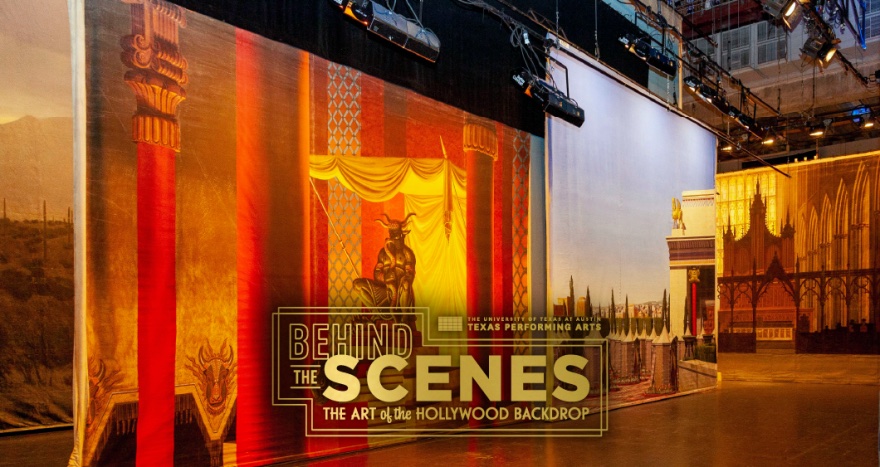