2020 has been a year of sacrifice and loss. We’ve traded abundance for scarcity, kinship for solitude, and whim for measured compromise. For those of us with a creative spirit and for whom trips to the theatre were a mainstay of our nights and weekends, the inability to enjoy the arts—or the outright unavailability of them—has served as a poignant reminder that we’ve been taking it all for granted. Joni Mitchell was right.

Undefeated, Austin punk theatre company Bottle Alley has spent these strange times doing what they do best, being creative. Unwilling to simply go to the Winchester for a pint and to wait for it all to blow over, Bottle Alley has worked with The Vortex to create unique and engaging experiences that are specifically designed to be accessible even amidst all this ensuing madness.

Over the last few months, Bottle Alley staged two virtual productions of its acclaimed Self Portraits productions, allowing theatregoers to enjoy their unique brand of storytelling from their homes. On the heels of those performances, Bottle Alley has invited audiences to do something that feels decidedly bizarre these days: the chance to go sit and see a show. Live. In person. As in, actually leaving one’s house to plant one’s ass in an unfamiliar chair and experience a performance. With (gasp!) other people nearby.

Needless to say, I jumped at the chance to attend. And not just because I knew that I’d be able to bend the rules a bit and spend the first bit of the performance sucking down pasta from Patrizi’s, a food truck serving patrons of the Butterfly Bar and the Vortex. I’m not much of a foodie, but that’s the best damn Italian food in Austin; if you disagree, I think you need to seriously evaluate your life choices. But I digress. 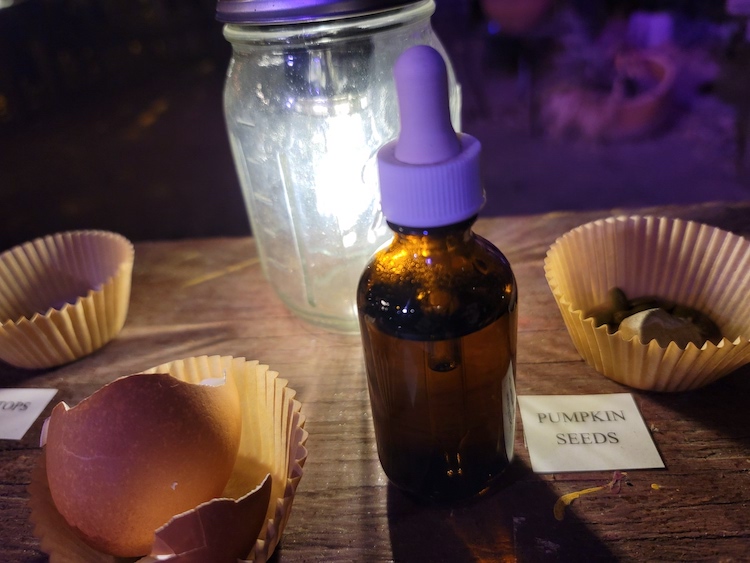 Wildcraft, written by Miki Johnson and Bottle Alley Co. founder, Chris Fontanes, is staged at dusk in the beautifully intimate and slightly spooky setting of the Vortex’s garden. It’s as educational as it is provocative.

Set in the Bottle Alley’s ongoing Farm Road Coven universe, a setting shared by Bottle Alley’s preceding works Black Dog, Wraith Radio, and others, Wildcraft invites its audience to open the door to another realm. “Green witchcraft,” we’re told, “is an inexact science.”

“Stir deliberately,” says December (Miki Johnson). We’re being guided through the concoction of a powerful spell, one that December promises will bring us peace when we need it most. “Peace and clarity in chaos.”

With the topper placed on the bottle, our spell is ready. Almost. This spell is a powerful one, December tells us, but it needs to be charged. She tells us to leave this one on a windowsill to absorb the energy of a storm. Only then will it be ready for us when we need it.

Throughout the exercise, December waxes romantic on the tales from her life that guided her journey, tales that she hopes will guide ours as well. Miki Johnson’s performance is stellar, and is as subtly physical as it is entrancing. Every movement seems at once intentional and organic; a hand held to her eye when describing the memory of a ladybug, gentle movements when describing a spirit garden which is clearly important, if not bittersweet. She’s holding something back, it seems, and we want to know what. 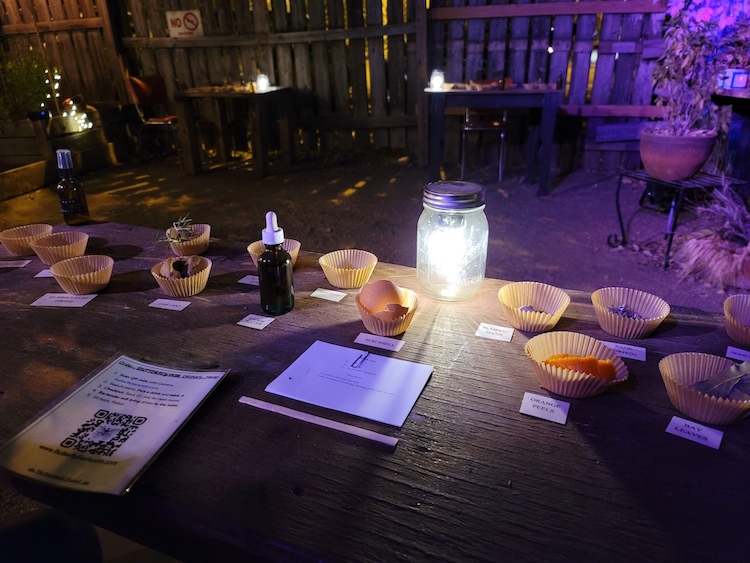 Wildcraft is a participatory exercise, extremely immersive, and it’s clear Bottle Alley has paid close attention to the audience’s perspective. Elements we’ll use to concoct our spells are laid out before us and beg to be touched. Ash. Rosemary. Skullcap. Oak leaf. Orange peels that feel fresh and damp.Our fingertips relish in the touch of unfamiliar herbs. Our ears parse December’s carefully crafted, wistful and alluring oration. It’s in this regard that Bottle Alley has done something exceedingly special.

Subtly, each of our senses are engaged and it’s in this respect that Wildcraft subtly contrasts and resolves the danger in the world around us. In a time that demands and forces distance and solitude, Wildcraft invites and engages physically, satisfying an innate human need for closeness and touch.

I’m writing this as the first spell we concocted sits on a nearby windowsill, waiting to be charged. Ironically, the “eye of the storm” that spell provides is something I’ve already gotten. While the skies have remained clear in the days since the performance, the truth is that Wildcraft itself is the eye to the storm. In a time when we’re forced to distance ourselves, Wildcraft turns the solitude we all experience into a captivating experience. We’re alone, but we’re alone together, and it feels like a brief return to normalcy that’s at once otherworldly and provoking.

Both Bottle Ally and The Vortex are to be commended for this performance. The former for challenging itself and its audiences, somehow managing to brave hardship and tailor and tune a performance that feels like a tincture for a pandemic, and the latter for providing a platform for such a unique and satisfying experience.

Wildcraft is a love letter, a beautifully crafted respite, and the Vortex has shown yet again why they continue to be a pillar of Austin’s artistic community. 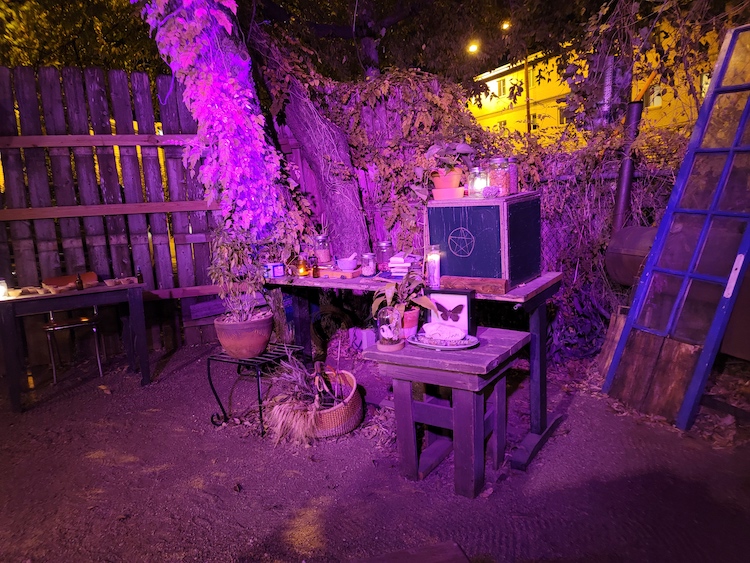 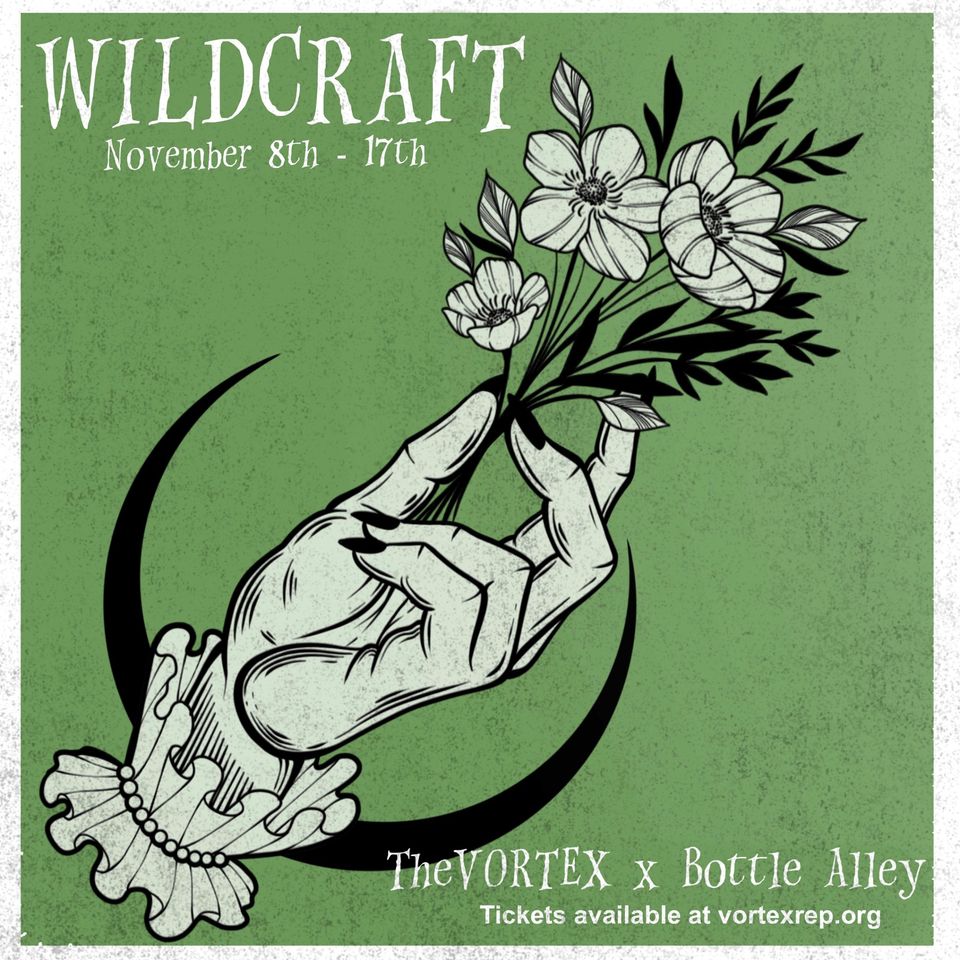