Review: The Niceties by Jarrott Productions
by David Glen Robinson

The Niceties is about intersectionality, the intersections of every issue you can name: race, gender, age, sexuality, class, power, revolution, economics, freedom, history, semiotics, equity in all modes, communication theory, pronoun etiquette, and morality over all. The intersections of these issues, each to all, are touched lightly or embraced passionately in this play by Eleanor Burgess. Jeremy Rashad Brown directs.

The play is set in the office of a history professor of a small, elite, northeastern liberal arts college. Professor Janine Bosko, played by Francesca Christian, treads its ivy turf. An African-American student in one of her history classes, Zoe Reed, played by Jacqui Calloway, visits her there. Reed is answering a request by Bosko to review her honors paper turned in weeks early. Clearly, Reed is a driven, committed undergraduate student. They discuss, debate, disagree, disclaim, disavow, denounce, and denigrate. And so the play ends. There isn’t much hope in all this, and of course, no clear solutions. But we are left with a breathtaking slice of contemporary American life. 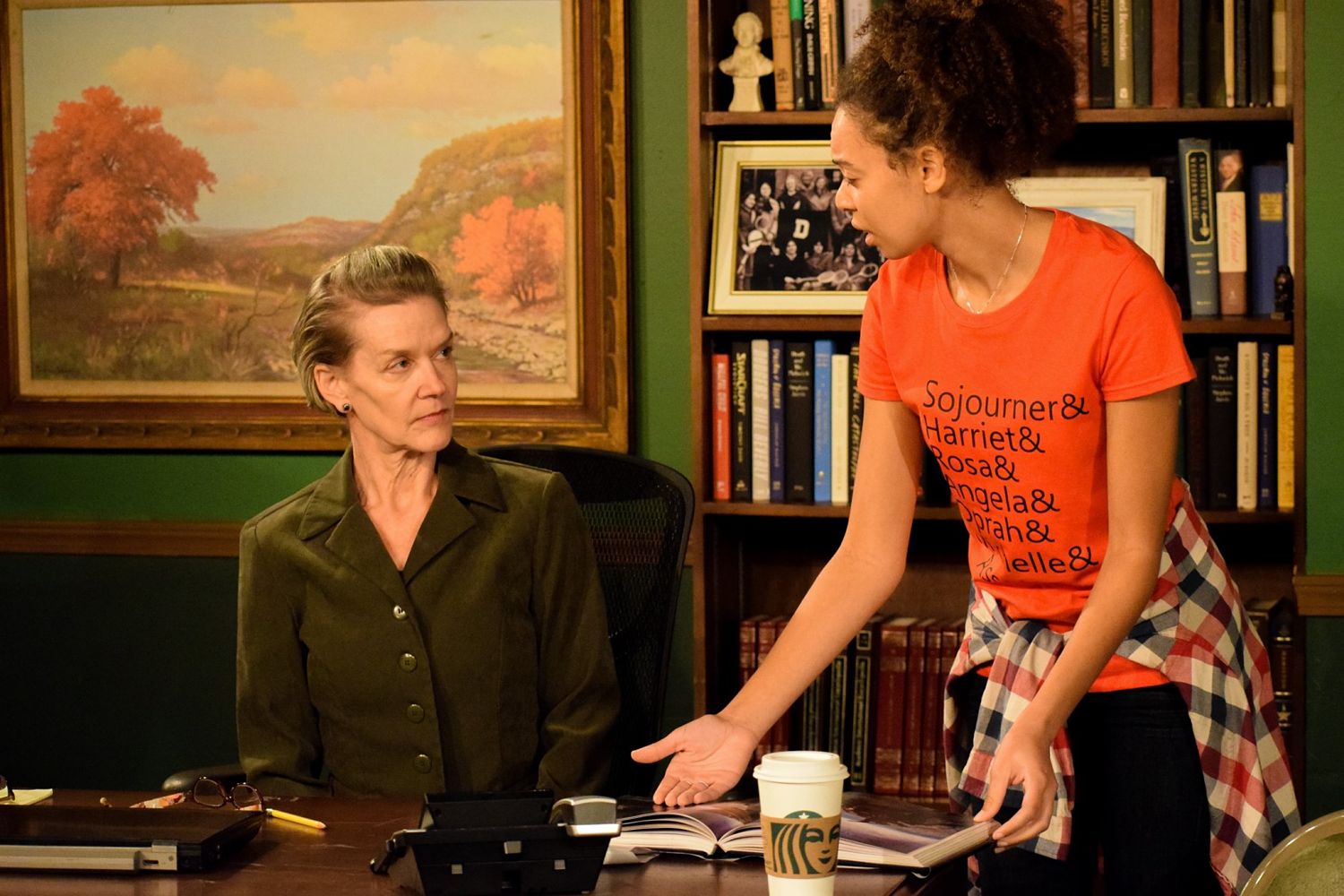 Still, the large verbal address of the here and now offers much for all, and as always, where you stand is where you sit. This reviewer was most fond of the generational divide present and the subtheme of competing methods for gaining knowledge. Bosko extols the primacy of holding a parchment signed by a founding father. Then she turns and effectively tells Zoe to get her face out of her device. But Zoe uses her cell phone and digital media as a tool (or weapon?) in several moments against Bosko.

Director Jeremy Rashad Brown tries to tease apart the issues writhing in this spaghetti bowl of despair, but he can’t. The script won’t let him. And that’s the point of the play. One can engage the debate at any point, but any issue besmeared with the sauce of injustice sticks to two or three other issues equally fraught.

The most adept effort at clarity on the part of director Brown is the separation of the interlocutors laterally on the stage. One character consistently moves downstage right, the other downstage left. They come together in moments of greatest intensity. This is one of the most important elements making The Niceties a satisfying theatre experience versus the baseline expectation of a boring two-person dialogue bomb. The story of the play has a couple of surprises nested within it, and any discussion of the particulars would amount to an unfair spoiler. It suffices that Professor Bosko is not entirely the bound-in-leather upper class conservative she appears to be, and student Zoe Reed is not entirely the worthy-but-overlooked affirmative-action African-American über-radical she appears to be.

The wisdom here is that we all have a story and neither it nor we individually should be dismissed because of external features.

A big tsk-tsk goes to Jarrott Productions for failing to provide even one word about the playwright from the program beyond printing her name twice. “Wikigoogle” research on Eleanor Burgess reveals that she is a very new, very young playwright with deep connections to East Coast universities and theatre communities, hence the well-written familiarity with the upper class academic context of the play.  The richness of her script overall is a challenge to all who take it on, and the Jarrott Productions cast is well up to it. Both of the actors were well-heard in the exquisite physical and aural environment of Trinity Street Playhouse. The actors’ elocution is fine, and a few opening night bobbles only did a mean critic’s heart good. The few minor notes that may be given are that Christian made accent gestures in hands and voice frequently, tending to give her a monotonous pace. That pace was nevertheless rapid, clearly to bring the play in at a reasonable time length. Calloway kept up with it, but her chirpy soprano voice failed to add gravitas to the weighty issues she hit so hard, and made some of her expositions seem chatty.

Of the huge mass of concepts and images offered by the play, several had great meaning but lapsed into obscurity in the mass. One monologue deserving more exposure was Zoe’s vision of the three pathways her future life could take. The first pathway was advocated by her professor Bosko: to work hard and gain degrees, fellowships, postdocs, prestigious jobs and the right marriage. In other words, to win by winning big. The second pathway followed a less intense course of life—to take a colorful approach to social activism full of artistic statements, multiple income streams, and a general Merry Prankster ethos of protest. The third pathway was to drop out and attack. The pathway leads to exposure of injustice in every particular, to protest with every breath, and to seeking every opportunity to oppose Western civilization and all the privileged living in it. These pathways have stark contrasts, but Zoe implied that she felt tugs toward each of them from her young African American community of peers. Zoe’s monologue has the ring of reality.

Jarrott Productions has once again produced a front rank work of advanced intellectuality that does not abandon theatrical artistic values. The company again gives voice to downtown urban values of the Austin, Texas variety. Anyone who wants to hear more of that voice should attend The Niceties. Visit this spaghetti bowl of despair, and you will go home satisfied and inspired. The play runs until February 2, 2020 at Trinity Street Playhouse, downtown Austin.

The Niceties is a lengthy two-part evening of non-debate. Playwright Eleanor Burgess opens with her characters, the pedantic, well-meaning white-woman prof, and the impetuous, earnest African-American undergrad, in the brittle artificiality of an office discussion of an honors thesis on the American revolution. Janine Bosko, Ph.D., a pathbreaker of sorts in serious academe, offers some general counsel on writing style that her student's in a hurry to acknowledge before leaving. The shit hits the fan when the prof questions Zoe's premise that the American revolution succeeded beause (to elaborate beyond the text) unlike the French revolution with its sans-culottes delighted by a Jacobin reign of terror or the struggles in Spain and Argentina fueled by the hunger and demands of the descamisados, in the American colonies the underclass consisted of a half million enslaved Africans unable to attack the established order. Zoe contends that wealthy white men's compromises and Enlightment model building were possible in the colonies because of fundamental societal oppression. It's a striking thesis and one that rings true, but Zoe's paper is written polemically and with virtually no research.

The women's experiences, methods, and beliefs clash instantly. Concepts and refutations come at you at a mad pace, and the actors' mastery of those torrents of furious words is entirely intimidating as you try to swim upstream and retain something of the substance. Professor Bosko's effort to encourage the methodical cerebral approach of academia only drives Zoe into intenser emotional reaction, provocations, and waving of the bloody shirt of the African-American experience. Playwright Burgess employs those two irreconcilable world views like broadswords -- wielded by each character upon the other and by both upon the audience.

That's both the strength and the weakness of the piece. The arguments from each women are eloquent, adamant, and arrogant; the argument between them doesn't occur at all, for during the mounting tension of the first act neither listens to the other. The pace of the words is furious because neither really stops to consider the assertions of the other. The dialect is non-Hegelian; the first act is the playwright's loud exposition of thesis and anti-thesis, ended only by confrontation and accident, and the second act's rueful opening truce, set three weeks later, offers a tentative effort at accommodation that hurtles back into the same unresolved angry disputes. Zoe's parting words of condemnation, purely rhetorical threats in current society, would have been the despatch to the scaffold or guillotine in other revolutions -- a belated but searing comment on the premise in her honors thesis.

For audiences expecting a familiar form of drama with resolution of plot compication, The Niceties is a frustration. It pours onstage an example of the angry set-tos of contemporary society, adversarial refusals to perceive even a shred of credibility or even humanity in an opponent. It's a pedagogic piece with a capital P; one can grant that and even admire the crafting of it, but one may find it hard to endure, no matter which of those fundamental world views one embraces or tends to favor.

It's telling and quite possibly deliberate that the very title of The Niceties encompasses contradictory meanings. My ancient copy of the OED traces the evolution of "nicety" from the time of Chaucer until about 1900, after which it apparently fell into disuse. The word's meaning modulated with the passing of time and became almost the exact opposite of its early uses. In chronological order, with examples from literature (op.cit.), the grand dictionary defines the word as 1) folly, stupidity; 2) foolish or wanton conduct; 3) reserve, shyness, coyness; 4) sloth, idleness, indolence; 5) excessive refinement or elegance in dress or manner of living; 6) Delicacy of feeling, scrupulosity, punctiliousness; 7)  Precision, exactitude, accuracy, minuteness; 8) The quality of requiring delicate consideration or management; delicacy, difficulty, subtlety; 9) Something choice, elegant, or dainty; and 10) A nice or minute distinction; a subtle point in refinement or pratice.

THE NICETIES will play Thursday-Saturday evenings at 7:30pm, with Sunday matinees at 2:30pm, from January 16-February 2, at the Trinity Street Playhouse, located on the 4th floor of the First Baptist Church of Austin at 901 Trinity Street.

Late arrivals will not have access to the building.

Tickets prices range from $15-$30 with discounts for seniors, students, teachers/former teachers, as well as active and retired military personnel; our first Thursday features Preview Night Pick-a-Price tickets as low as $5. 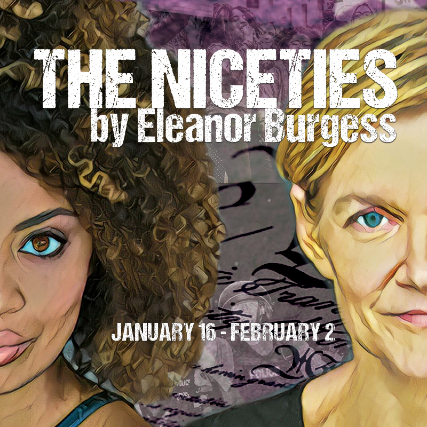