Zach Theatre's A Christmas Carol is back for the sixth year, and Dave Steakley's canny jukebox presentation is a charming delirium. Zach's producing artistic director again takes the simple structure of the much loved tale of redemption and decorates it with celebratory rock and roll the way folks all across the nation are dangling ornaments and tinsel on forests of Christmas trees. Sometimes the connections to Dickens' simple, sturdy plot are not entirely evident, but by panning the gold of U.S. popular music of the last sixty years or so, Steakley and the deliciously talented cast give just about everybody a number or two to love -- and plenty more than that for most of us.

Who doesn't know Ebenezer Scrooge? That grumpy old man with the crabbed heart gets his life lesson pretty much right at the end of his life, when Christmas ghosts accompany him to past events that soured him, to current circumstances of others to whom he's been doggedly blind, and to that bleak blank future where we'll all wind up. Dickens' tale is well known-- CTXLiveTheatre has posted PR pages for more than forty versions since 2008. That's almost enough to make a theatre writer lapse into bah, humbug! at the excesses of Christmas celebration every November and December.

When the Zach Theatre first fielded the show six years ago, it was announced as A Rockin' Christmas Carol. The "Rockin'" has since been dropped officially, but I've taken the liberty of retaining it, because it precisely describes the concept. You're going to be attending a greatest hits evening with lots of party scenes. It's a celebration of the celebrations of the season. 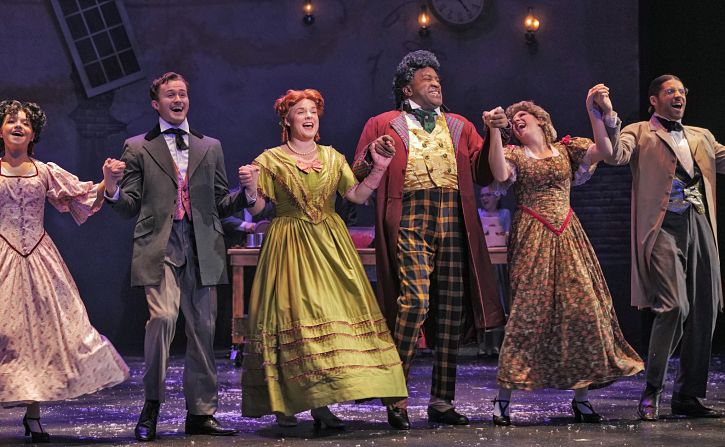 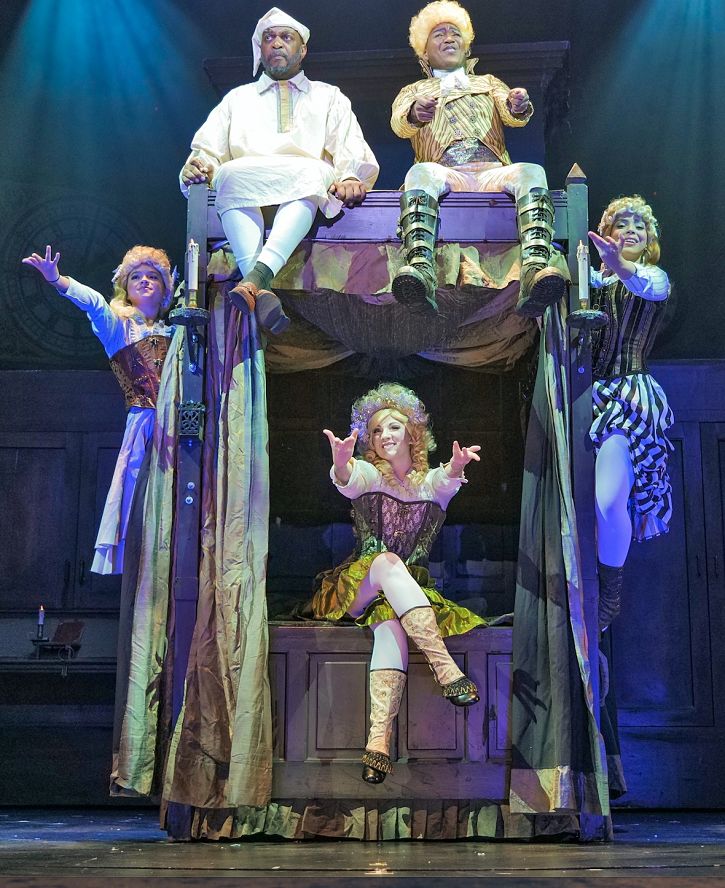 With all that partying going on, the structure of the tale by Dickens stands up well enough, but the principal character, Ebenezer himself, gets shoved into the background a great deal of the time. Dickens was telling a story of redemption, an intimate, scary tale; Steakley's script retains virtually verbatim all of Scrooge's lines, but amidst all that jubilation, recognizing, reading, and empathizing with the changes going on in Ebenezer's soul isn't the main message.

Steakley's casting scored a coup this year, capturing Marc Pouhé, probably the most admired male actor in Austin, who has created many a powerful protagonist. His presence, big voice, and intelligent interpretation always make him a "must-see." In this edition his character takes a shotgun seat to some epic musical performers and dancers.

Roderick Sanford with that deep bass and big frame towers over everyone both literally and metaphorically. He's the jack-of-all-characters: Marley in chains, old Fezziwig, a reverend preacher, and the grim silent figure of Christmas Future. Mischievous dasher Kenny Williams prances, preens, and dances with three can-can vixens, and they whirl Scrooge away into the past on his canopy-bed-as-carriage. Import Mary Bridget Davis as Christmas Present preincarnates Janis Joplin (a role for which she received a Tony award nomination). Those shining stars are surrounded by a constellation nearly as bright that includes Leslie McDonnell, the ever versatile Sara Burke, clear, sincere tenor Paul Sanchez, and a host of capable young performers from the theatre's pre-professional programs. 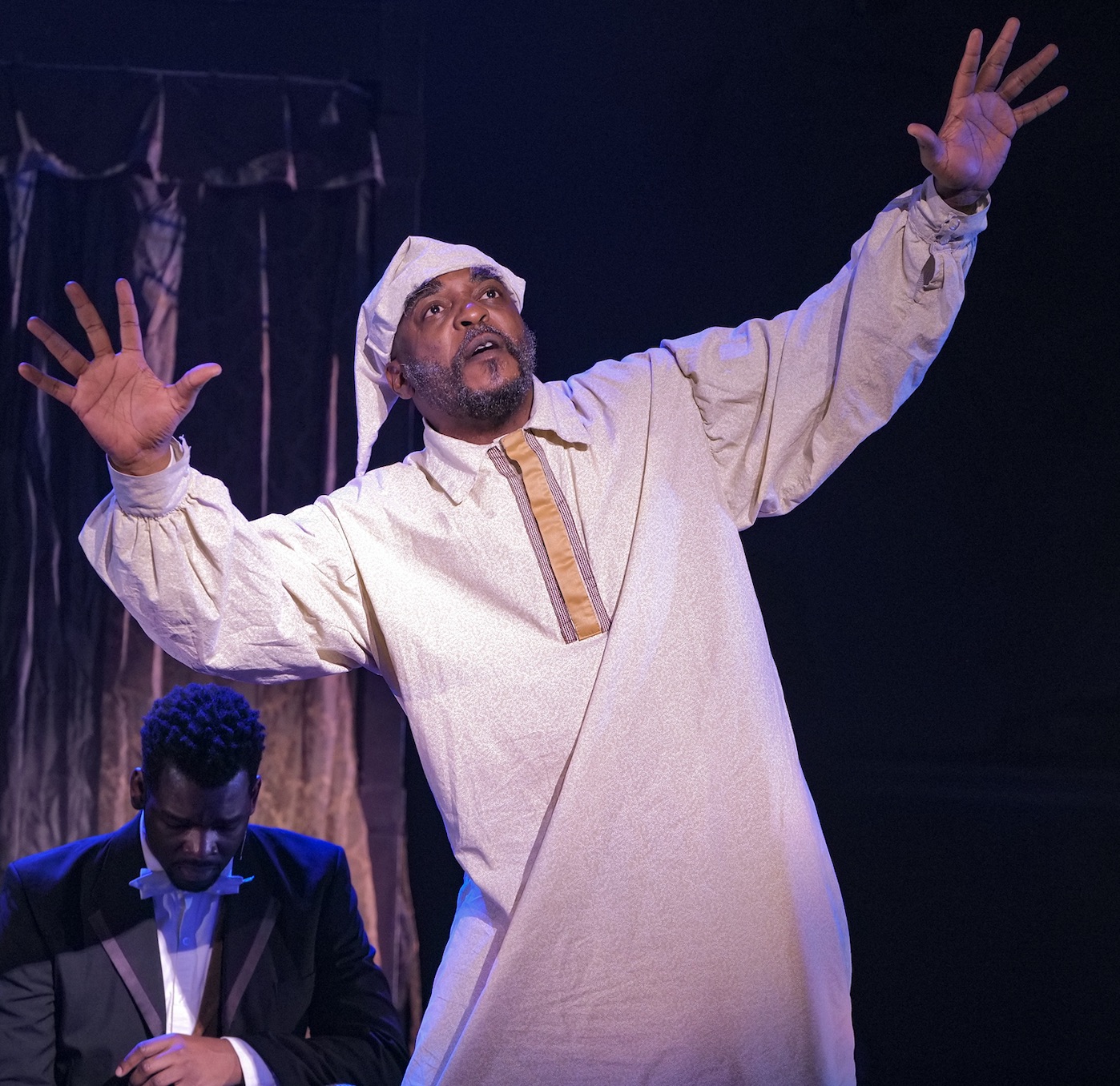 Pouhé does, finally, get the opportunity to take emotional charge of the story in the intense and all too brief moment before his own gravestone when he comes to Christmas. He gets to have some fun along the way before that; he often silently punctuates the tale with vivid but subtle expression and body language. He goes on an unexpected hip-hop tear and even gets a baritone lead-in to a big dance number.

This interpretation of A Christmas Carol is set in a world of diversity and human warmth that's too Austin to be true. It's all the more appealing for that. That Scrooge is a fool if he doesn't embrace his jovial nephew Fred (Michael Valentine), attend that gospel church that's gloriously receptive of all (Rev. Sanford intones a Christmas hymn and then calls "brother Cratchit" to sing), or support Cratchit's great big, happy foster family and Tiny Tim/Tina (Adi Dahl/Ellie Torres, according to the performance schedule). And it's just as heartening to see that this show goes several steps beyond mere "colorblind casting" -- it embraces and revels in harmonious relations among people of all colors.