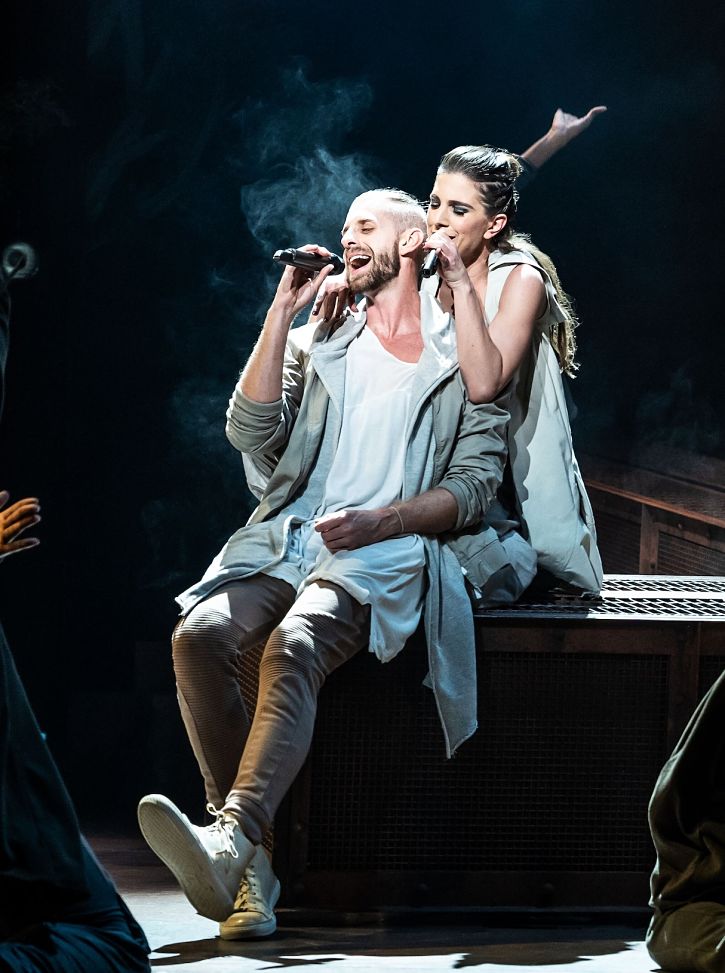 Before Jesus Christ Superstar was an international musical phenomeon, it was a rock opera concept album written by Emmy-, Gramm-y, Oscar- and Tony- award winners Andrew Lloyd Webber and Tim Rice Though it went on to sell over 7 million copies it was originally banned by the BBC as sacrilegious. Both the album and subsequent musical were condemned by various religious groups.

It didn’t help that lyricist Rice included text that suggested that Jesus was not God, rather merely a historical figure who was “at the right time at the right place.”

The storyline focuses on the final days of Jesus from the point of view of his betrayer Judas. This caused additional issues, since many felt that the play was too sympathetic to Judas. In fact, they story as it’s told here focuses more on the interpersonal relationships of the character than on the mythos surrounding the man. The idea that Jesus was a man with his psychological struggles caused by the politics of the time created a rawer and less fantastical version of his story that some critics found disturbing. None of this hindered the production’s continuous success, and in honor of its 50th Anniversary a US tour is being launched in Austin, Texas. 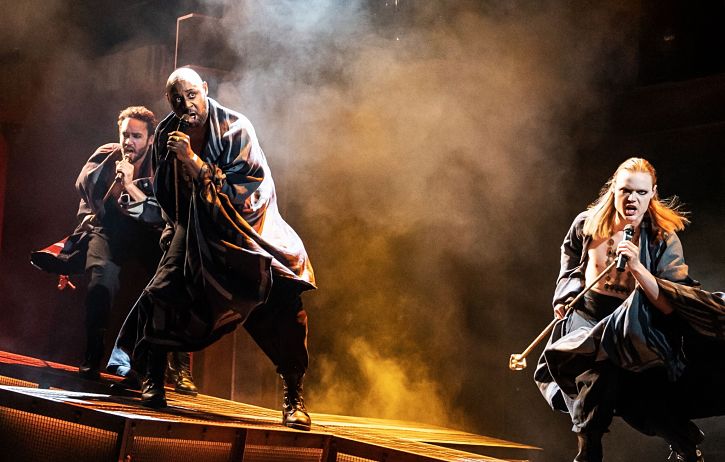 Yet how does one update a 2,000-year-old story? In this case, by focusing on Rice’s  original intention, which was to tell the story of a man burdened by being a living legend. The rock and roll soundtrack needs no updating, for it is as riveting as it was a half a century ago. If you like the powerful vocals, funky basslines, howling organs, and blistering guitar lines of the seventies, then this show is on point as it ever was, and let’s face it, many, many bands of the 1970s are still getting substantial radio play and frequent appearances on movie soundtracks. So, fittingly, this production is an homage to the original’s gleeful emotional outpouring. The band and the dancing are cohesive, and the upbeat tempo is a balm to the audience member who likes musicals to be less melodramatic and consistently engaging.

The story is well known, and the stakes are high despite its inevitable conclusion. It is not the story of a man or his betrayer or even of his quickly flagging support network, it is the tale of a superstar, and in this way the production has even more relevance today. Jesus, for all his emotional pleas and overwhelming charisma, is not who he says he is, he is who the people make him. 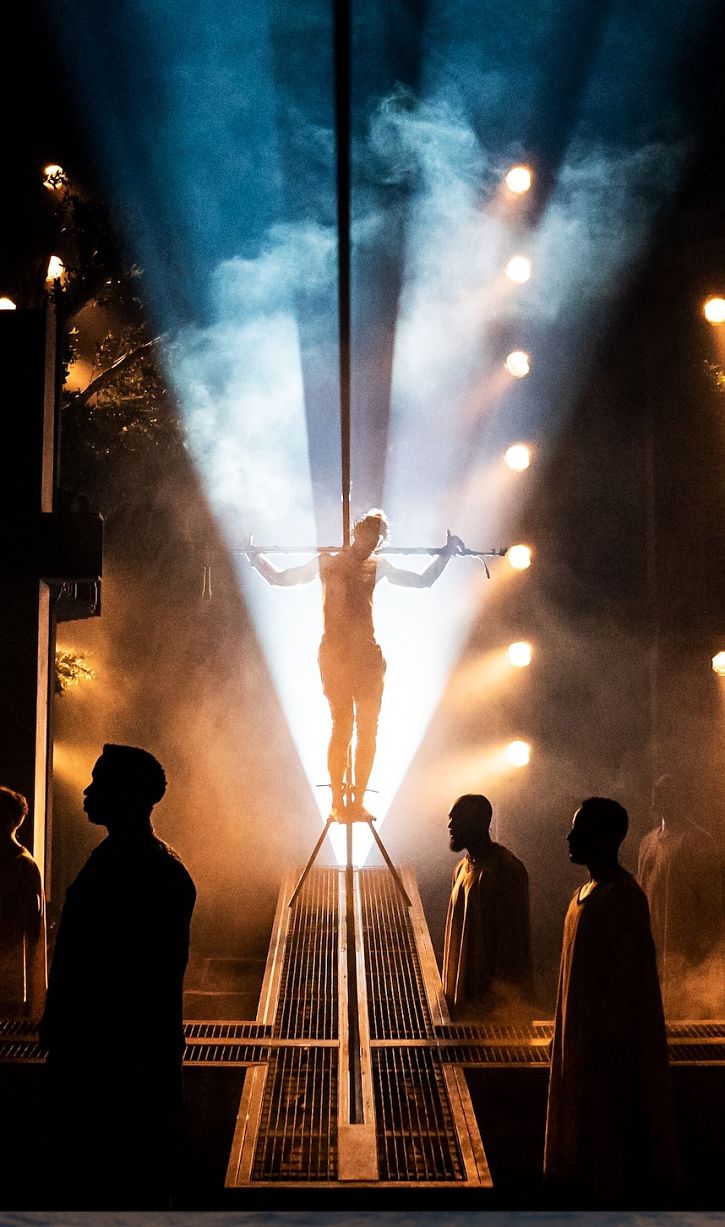 In this modern age of teenage Instagram celebrities, lavishly paid athletes, one-hit wonder musicians, and of course the never-failing-to-be-adored-or-abhorred movie stars, the idea of superstardom has morphed into a realm with little or no accountability (a situation that has sadly overlapped into the political world as well). This production comments very cleverly on this reality by employing the microphone as a fluid symbol that runs the gamut from weapon to totem to benediction to noose.

There are other choices in the production which seem to make less sense. The costumes were drab, but that did serve to highlight the many different colorful hairstyles. Yet the hairstyling didn’t quite gel, as some members of the cast looked goth, others like hippies, and Jesus himself had what resembled a typical Hare Krishna do.

My friend commented that the cast’s outfits appeared quite comfy. The setting was very industrial and looked to me like a bombed-out tenement building. This worked for some scenes but not all. The lighting was dim and never quite came to a full illumination; again, it worked for some parts but not others. Overall the mood felt obliquely abstract. Nonetheless, this did nothing to harm the electric energy of the play, which moved along at a slow burn to its cacophonous conclusions. The use of glitter and blood were spectacular and certainly highlighted the long painful journeys of both Jesus and Judas. This dichotomy was really well done, agiving the impression that one could not exist without the other, fort the plotlines of their lives were inexorably intertwined. Around these two primary characters the chorus, the Romans, and Mary whirled around at times like paparazzi, a gospel chorus, a sycophantic milieu, a hostile mob. The dancing and movement choices sharply defined their roles at any given moment.

James Delisco Beeks as Judas made excellent use of his powerful voice. It sizzled through the air whether he was soloing or singing through the chorus. In many ways, he stole the show -- fitting, as he seemed to be the one character struggling with his free will in comparison to others who plodded, danced, and marched towards unavoidable fates.

The production spares no expense in creating Jesus as a sympathetic figure struggling to maintain his original vision. This was powerfully demonstrated in the scene where he tries to heal the crowd that has surrounded him in desperation. He flits back and forth from victim to victim with such bitterness that he might as well be signing autographs instead of healing the blind.