The Mastrogeorge is a microtheatre -- maybe a nanotheatre -- just off east Cesar Chavez on Pedernales, tucked behind Blue Owl brewing. This performance space has folding chairs for an audience of about 15 persons. Though it's stark and small, resembling a draped concrete box, surprising things happen here. The facility is associated with the Carol Hickey Acting Studio, so the focus is on the acting, which can be of high quality. 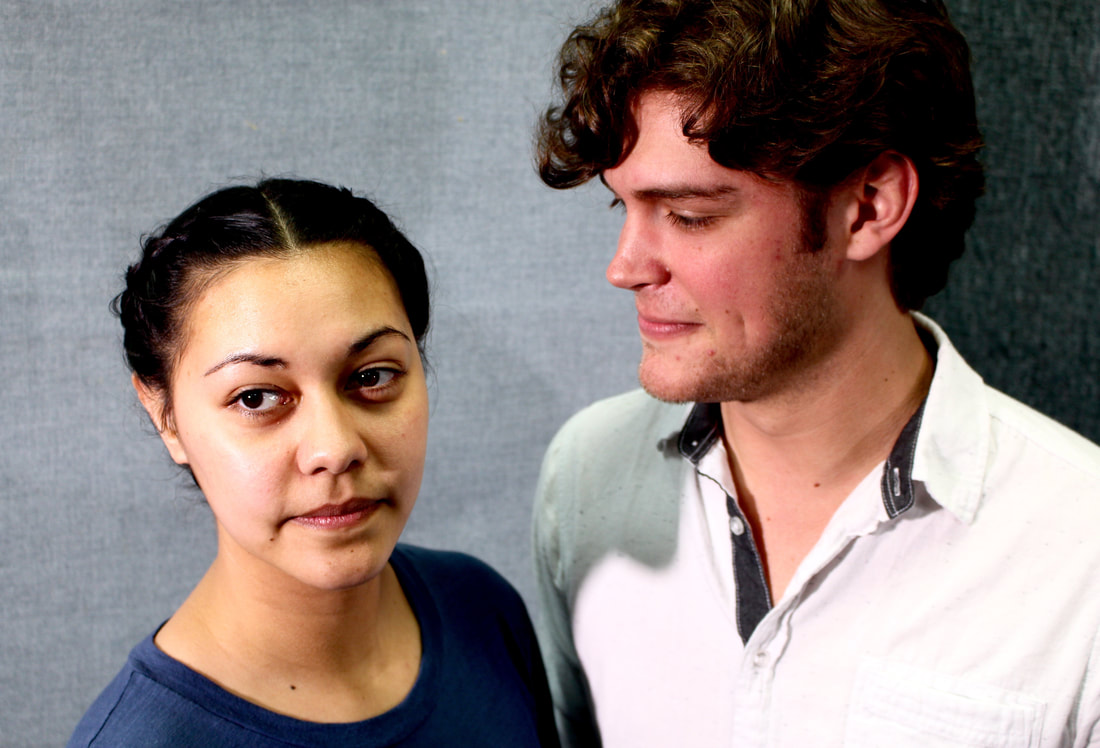 Lila Rose Kaplan's script focuses on flying and upon the ambitions of female Air Force pilots back in 1997. There are only four members of the cast, and rarely do scenes feature more than two at a time. The plays opens at a high school reunion with a couple of twenty-something loners, Kay McClure, now an Air Force transport pilot, and David, a man who gave up journalism in Chicago to return to take care of his ailing father. They "meet cute," to use Hollywood parlance, and the playwright has created entertaining interplay as droll, whimsical David tries to re-establish -- or perhaps establish -- contact with a woman he admired from afar while in high school. Brennan Patrick as lonely David, now a TV weather forecaster, is timidly engaging, while Alani Rose Chock as the pilot isn't interested in the contact. David pursues her later and they strike a compromise: during her reassignment to an air base in Germany, she'll read his letters but reply only with lists. "I'm good at making lists." These opening scenes are promising, defining characters and creating expectations.

Action then shifts to Germany and the change of setting sets rolling an entirely different action. Kay is in flight selection, hoping to be yanked from transport duty to fly a fast plane with advanced lift capabillity; she has to prove herself to her new boss, a major who's embraced military life and protcol and has harsh words for subordinates. A new, complicated set of romantic entanglements develops, affected in part by the policy then in effect that barred openly displayed homosexuality ("don't ask, don't tell" -- though it isn't mentioned in the script). Major Ann Clarkson (Karen Harrison) is the partner of long date with Monique (Brittany Flurry), the commanding colonel's secretary. Major Clarkson sees Kay as a surrogate for the hotshot flying career she never had. David wrangles a press pass from his former employer as a pretext for visiting the base. 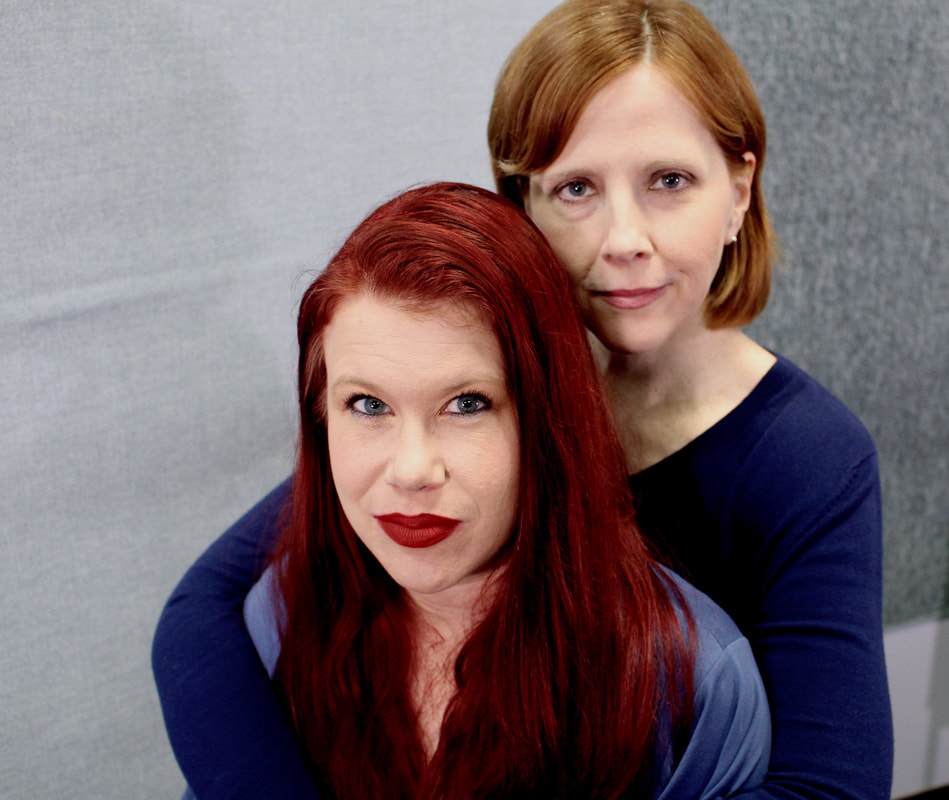 Both Flurry as the unseen colonel's chilly secretary and Harrison as the major offer two faces to the audience and to the world, symbolic of the constraints of 1990's armed forces policy. Flurry has a formidable, steely presence with outsiders but a softness with her lover that becomes unhappy vulnerability; Harrison as Anne is tough, disciplined, and challenging, especially with her subordinate, the visiting reporter, and the unseen colonel. Chock as Lt. Kay suppresses emotion much of the time but can't conceal her glee at the prospect of becoming lead pilot for the new bird.

There's a lot of talk about that gorgeous new plane, with characters staring past the audience at it either on the ground or, somewhat higher up, in flight. This part of the story seems destined for the cinema. In the theatre, those imaginary perspectives only reinforce the closed-in feeling of this black box, and the paper airplanes festooned about the room, though clever, do not open it up. Your program, by the way, also comes folded as a paper airplane. 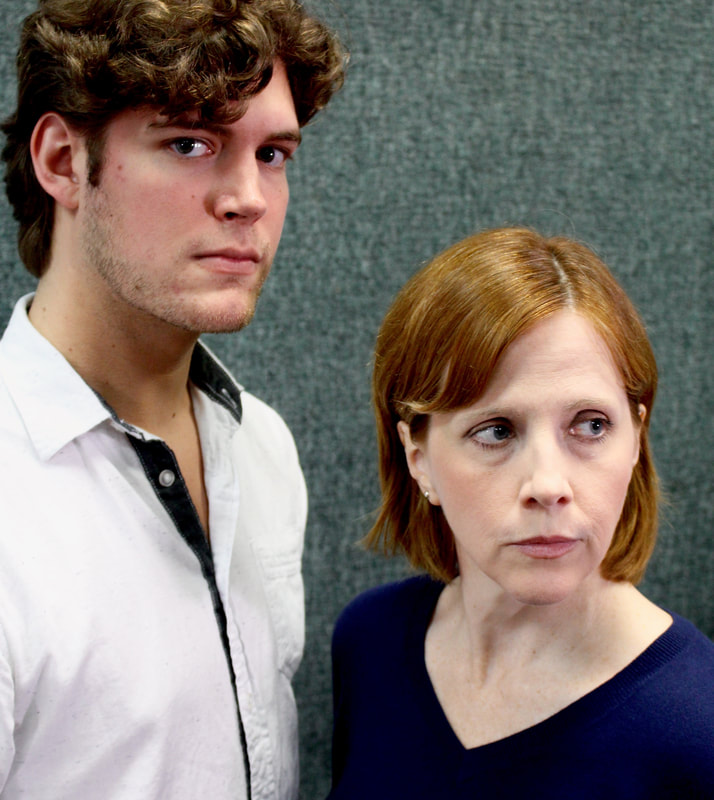 The plot structure is a bit muddled, obliging the audience to try to decide which of these characters is the protagonist. Early scenes emphasize Lt. Kay and the hopeful David; middle scenes offer a triangle of sorts involving Monique, Major Anne and the young pilot; several scenes explore hinderances to Major Anne's career and her obsession on breaking through those barriers; there's a hint that David has dug up a big story -- not about a lesbian officer but instead about harsh discipline and destroyed carrers ("this is a case of feminism biting itself in the ass!"). A breakup and two confrontations occur, leading to a climax that occurs entirely offstage and faraway as three characters follow with horrified fascination the unpredictable maneuvers of the unseen airplane.

This production is billed as the world premiere of 100 Planes, but a Google search suggests that it was done in a single performance at Stanford in 2009, workshopped a couple of times in 2012, and served as the basis for a cut-down version at Beverley Hills High School featuring an all-female cast. That's no "gotcha," of course. None of those was a full, sustained staging.

With this work Elizabeth Newman and Stephanie Moore have again found a challenging script for their new theatre company. I expect that we'll be able to look forward to more of the same.

Click to view the Filigree Theatre program for 100 Planes

TICKET INFORMATION
Tickets are available beginning February 27, 2019 online at FiligreeTheatre.com and in person at The Mastrogeorge Theatre Box Office for $30.00. Student, Senior and Group discounts will be available on the Eventbrite ticketing site. 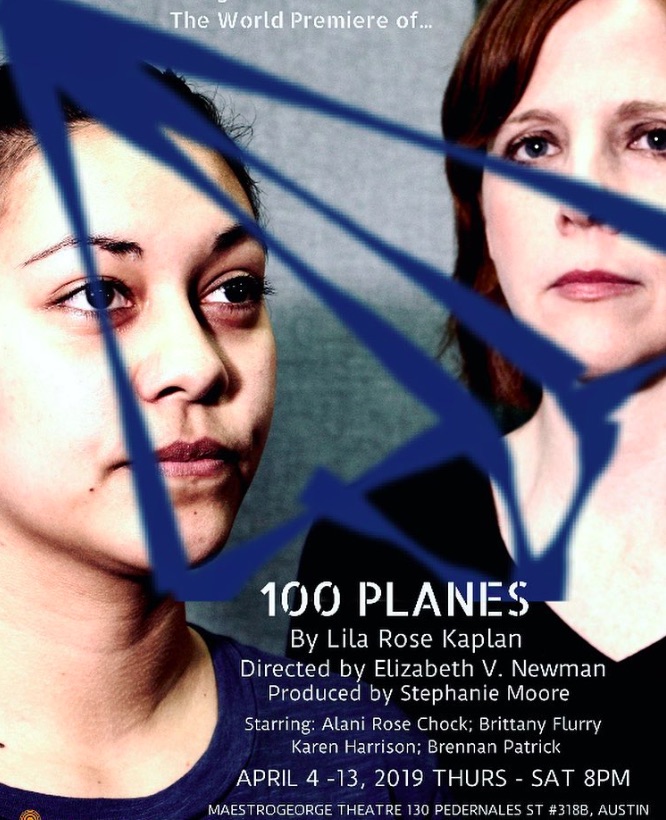