The first worry for a reviewer of the touring production of Fiddler on the Roof playing this week at UT's Bass Concert Hall is whether there's really anything useful or insightful to be said about this epic musical. First produced on Broadway 55 years ago, it received 1965 Tony awards for best musical, best score and best book. That monster success has been revived five times on Broadway since then, at intervals averaging nine years. It has played all over the world (I remember a curious version done at the Teatro Colón in Quito, Ecuador, back around 1982, featuring a blond Tevye) and on school and community theatre stages -- over the last decade or so around Austin it was performed by Trinity Street Players, the San Pedro Playhouse (now The Public Theatre of San Antonio), Fredericksburg Theatre Company, Lake Travis Theatre Company in Lago Vista, and The Theatre Company in Bryan. Gosh, at New Braunfels' 2014 Wurstfest, Circle Arts Theatre even presented a special version entitled Fiddler on the Wurst!

The story and the tunes are so familiar that during last night's opening performance I distinctly heard a couple of persons in the expensive seats singing along (at least, under their breath).  Except for the UT students dotted about here and there, most of the audience in that area seemed to be of an age to have seen the original, the original touring companies, or at least the 1971 film in which Chaim Topol took the lead role of Tevye the milkman that Zero Mostell had earlier made his own. 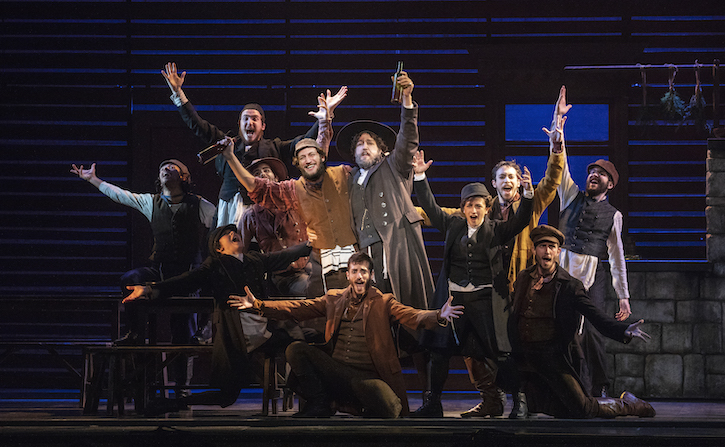 Why go experience again the story of the poverty-stricken orthodox Jewish community of Anatevke in Russia or see the long-suffering, patiently humorous character featured in the Yiddish tales written by Sholem Aleichem? I recall how odd and exotic that village seemed to me when first I saw it portayed, for as a youngster in the Deep South I in fact had no idea at all of the Ashkenazi community that had by that time been largely eliminated or expelled from vast expanses of Europe. Probably the most extensive Orthodox communities extant by then were those in and around New York. Fiddler on the Roof completed one civilizing mission without even contemplating it: it told the American public about the partly mythical origins of a deeply moral and law-bound community of believers who happened not to be Christians. And through Tevye, Golde, and their five ("five!") daughters the work gave human faces and deep humanity to their community.

This touring version of the show, probably based on the 2015 revival, serves those goals admirably, and it offers scene after scene of vividly masterful scenography, lithe and exuberant dancing, family conflict, quirky characters, love and heartbreak. You'll be getting full value for your ticket; these performers are pros, full-throated vocalists and astonishingly acrobatic dancers. Judging by the photos and bios of cast members, most of them are relatively young. They're certainly highly trained. The striding, bouncing, frenetic choreograpy used both for Russians and for the crowd at the Jewish wedding would have been impossible otherwise. 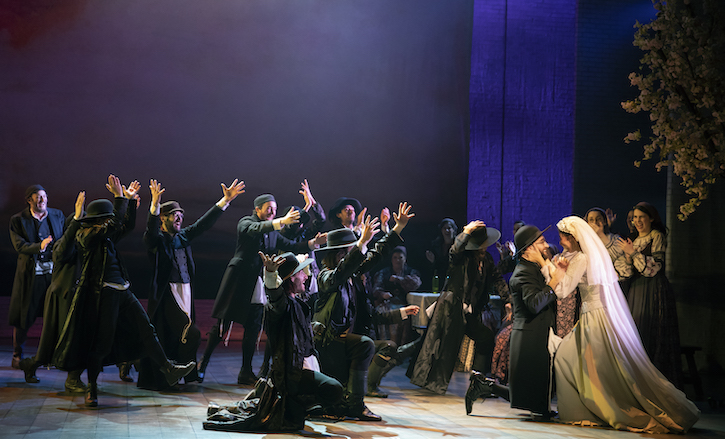 Yehezkel Lazarov, the accomplished Israeli actor and theatre director cast as Tevye, gives us a father figure with a muscular physique, far different from the wobbly bulks of Topol and Mostell, with a manner equally distinct from Zero's Borscht Belt delivery. On one hand, when Tevye addresses God, as he frequently does, you don't have the sense that Lazarov is simply joking to the audience. On the other hand, this Tevye has been directed to deliver some of those star turns at a breakneck speed, so that if you didn't already know the lyrics to  "If I Were A Rich Man" and "To Life," you might have a hard time following them. On the other hand -- the "third hand" schtick that Mostell did so well -- Lazarov delivers the "other hand" joke in such an off-hand manner that it usually doesn't generate a laugh.

Tevye is always quoting the Scriptures, usually inaccurately and to his own purpose. The book makes clear that he longs to be an educated man -- "If I were a rich man. . .  I'd discuss the holy books with the learned men, several hours every day. That would be the sweetest thing of all. "

Today, fifty-five years down the road from the banishment from Anatevka, it's possible to take a Talmuidic view of this most popular of musicals. The first act is a gently paraphrased version of the Book of Job, in which a man of virtue loses everything. In this case each of his daughters in turn goes against sacred tradition, and then the Jews of the entire province are evicted from their homes. In a musical staged only 18 years after the end of a European war that killed sixty million, this Job figure has it easy. The Russian who's the village constable apologizes in advance, and little is destroyed other than the bride's down pillows and a couple of tables at the wedding. No one dies; the only staged violence is the brief beating of Perchik, the radical from Kiev (Ryne Nardecchia, a Texas State alumnus).

The second act is filled out with comic turns ("Do You Love Me?" sings Tevye to his wife Golde, and there's "The Rumor," a silly scene showing the spreading and distortion of gossip) and with the agonies caused when daughter Hodel abandons the faith and marries a Christian. But the movement of that entire act is  Exodus. With America as the promised land.

Fiddler on the Roof
by Bock, Harnick and Stein
touring company 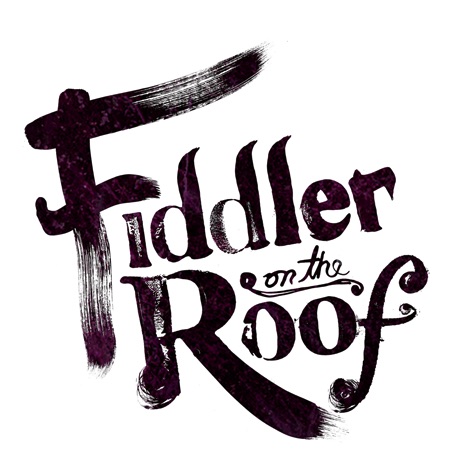