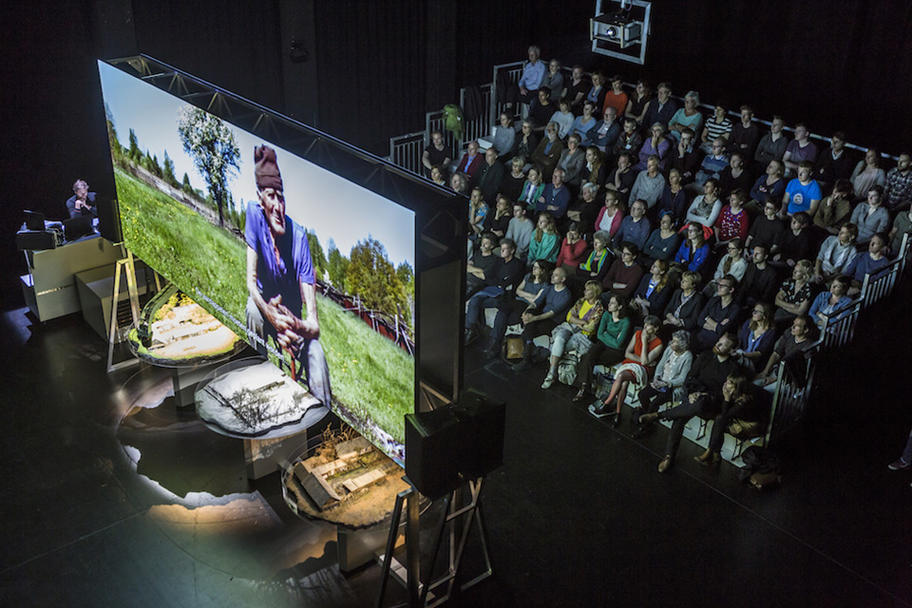 Much like the recent Heartland, the mixed media presentation (video documentary, music, scale modeling, digital compositing) Zvizdal [Chernobyl—So Far So Close] brings huge geopolitical issues home to individuals who are living their lives with the best of intentions.  Part of the title refers to the name of the abandoned, wrecked village in the middle of the nuclear exclusion zone around the Chernobyl nuclear reactor that exploded and melted down in 1986. Video teams researched and won permission to enter the zone and gain video documentation from the government of Ukraine, the country burdened with the zone.

The result of the research is an amazing work of art, with music composed for the documentary and with delightfully detailed miniature scale models of the farmstead locale, the setting at the heart of the film. These models are depicted in summer, autumn, and deep winter.  Generous funding by the Flemish government supported the artistic combine. BERLIN is a collaboration of Bart Baele and Yves Degryse.  They entered into partnership with Cathy Blisson to produce the work. Peter Van Laerhoven composed the music and produced the soundtrack. Geert De Vleesschauwer designed the digital visual effects in the film and for the live presentation. Ina Peeters built the detailed scale models of the farmstead with a staff of three.The models are reminiscent of the work of Austin’s Trouble Puppet Theatre and Glass Half Full puppetry performance companies. The Fusebox Festival and the Long Center are to be credited strongly for finding and bringing this work of art to Austin. The formal names of the human subjects of the documentary are Nadia and Petro Opanassovitch Lubenoc, but these names are not spoken or credited in the actual video, only Baba and Dido, respectively.

What did the documentarians, the filmmakers, and the researchers find when they finally penetrated the dangerous nuclear exclusion zone, the land polluted by a horrifying nuclear accident, the countryside irradiated by ionizing radiation, the clouds of subatomic particles penetrating and ravening every atom and cell in every living thing? They found an overgrown birch forest with patches of weedy farmland. And in the middle of it they found two exceedingly old people living in a ruined farmstead, the last two residents in the exclusion zone.  They were the refuseniks who would not be evacuated. 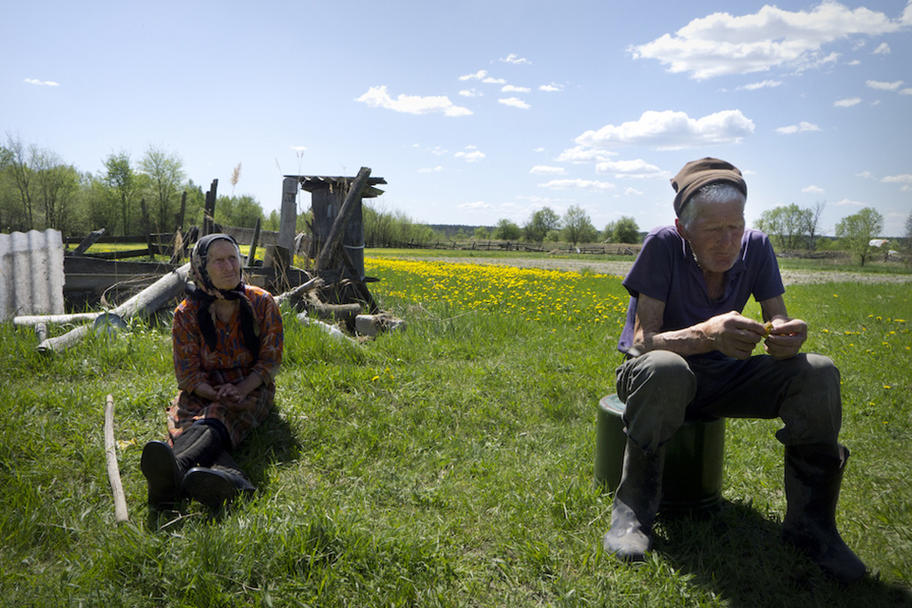 The initial scenes of the couple, Dido and Baba, monuments of sheer existence, are silent and long, views of them sitting outside on benches saying nothing.  They had no words and clearly felt no obligation to speak any.  Occasionally they flicked at insects.  Here the documentary performance piece/cultural critique turned on a dime to become something else. Gone was the theme of radiation and nuclear accidents.  The show became the story of Dido and Baba, a Russian novel of experience inscribed fully in the lines, marks, and scars on their faces and arms.

When they moved and spoke, Dido and Baba illuminated both their simple farming life and their advancing decrepitude, all of it from age, not radiation. Baba’s hands were more gnarled than Dido’s. She walked slowly with a staff, one leg turning awkwardly with each step, every movement and gesture painful. But she affected colorful print blouses, skirts, and headscarves and smiled readily at visitors.

Dido, bony verging on skeletal, used a staff and walked even more slowly than Baba.  He worked the potato patch and offered his mossy bon mot: “As long as America exists … it will produce insects … and send them toward us.” Dido cared for the animals, the horse in its hindquarters walking the same way as Baba, but it seemed that the horse, cow, dog, and cat took care of the humans as much or more than the humans took care of them. Dido led the video team on a slow walking tour of the deteriorating village of Zvizdal.  The human being was the perfect match for the disintegrating architecture.

The old couple spoke of their refusal to evacuate and their love of nature.  They lived fully in nature in spite of the pain vexing their every movement.  The couple lacked utilities and what we laughingly call Western health care. Talk about living off-grid!  The old couple perfected the practice and was happy to pay the price of their choices.  They had long since become parts of that exclusion zone, that nature. Perhaps that was why it was so devastating to see glassy-eyed, immobilizing grief wrought so painfully on the face of one close to 90 years old.  Yet life abided for a while.

One left the theatre emotionally disturbed but understanding clearly how the Chernobyl nuclear exclusion zone was transformed into a secret island, enchanted oasis, Spenserian bower, or Shangri-La by Dido and Baba, where love could thrive and grow into wrinkled and gnarled perfection. One wondered as well how our own private exclusion zones could be made to flower as beautifully.