Review: The Lion in Winter by Gaslight Baker Theatre
by Michael Meigs

Over the past decade of theatre watching in Central Texas, I've seen that truism confirmed again and again. The current production of James Goldman's The Lion in Winter at the Gaslight Baker Theatre, just off Lockhart's central square, is another example.

There's a lot of 'great' to it, and not in the casual American sense of the word. Goldman's script took on big themes (family, loyalty, love licit and illicit, the dire demands of dynasty and the twinned bonds of affection and cruelty) momentous English history (the 12th-century conflicts between Henry II, his wife Eleanor of Aquitaine, and King Louis of France) and the epic setting of Henry's Castle of Chinon.

Director David Schneider and his devoted cast bring alive Goldman's imagining of the bleak Christmas of 1183. Henry, now elderly by the standards of the day, has locked up his queen for more than a decade in another fortified castle in reprisal for her scheming to have him assassinated. All three of their sons are keen to succeed him, but the desires and plans of Henry and Eleanor are sharply different. The heart of Goldman's script is the verbal battle between the royal spouses. Their affection is as sharp as their justified distrust of one another, so this long dark Christmas laden with unwelcome surprises has elements both of a wickedly intellectual chess game and a verbal duel to the finish, alternating rhetorical broadswords and rapiers.

One of the 'great' aspects of the Gaslight Baker production is the astonishing set that mounts vertiginously before the audience in this venerable old converted music hall and cinema. The company has come close to rendering a faithful reproduction of the stone pile of a medieval castle. Their promo video for the production gives a sense of the scope and the intensity of this construction, but one really must lay eyes on it in performance to appreciate the arts of design and meticulous scene painting that went into it. At the level of the stage there's a wide playing space with three acting areas and two working doors, appropriately low; a central staircase provides a platform for twin thrones, convincingly imagined; and the upper level is used to play scenes in private areas of the castle, including the room with canopied bed and arras provided to the visiting French king. 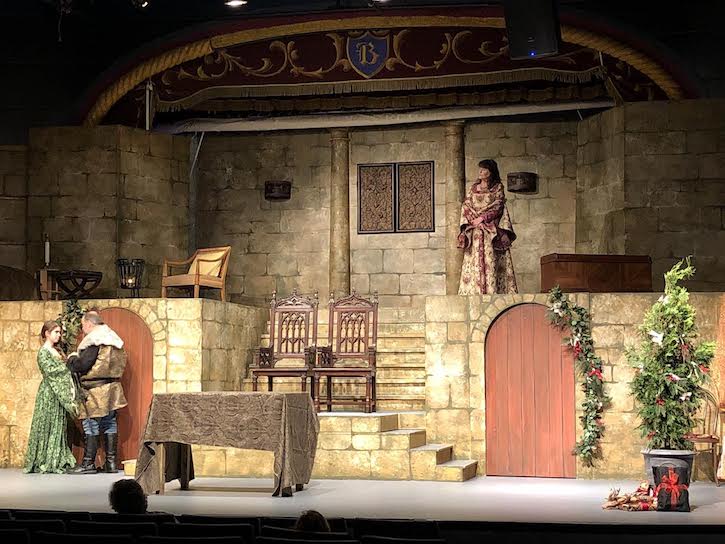 This scope and scale is not required to tell Goldman's story, a tale of intimate conflicts, ambition, politics and revelation. There are only seven in the cast, and the magic of theatre can occur without such massive support. For example, in the winter of 2011 the temporarily homeless Austin Playhouse performed it in a chilly unadorned tent in the Mueller Development. But there's a sudden satisfaction in transiting from the Texas-hot street and sidewalk via the lobby with costumed volunteers at ticket booth and concession stand and thence into the cool dim interior of the Baker building space where winter and the middle ages await. The quiet melodies of medieval chant intensify the feeling of otherness, both before and during the production.

As the canny, cunning Queen Eleanor, Jane Sledge Stoub is in command at all times. She's allure and duplicity incarnate, a woman of experience and ambition who has refused to be beaten down by adversity. Stoub knows how to deliver a line like a whiplash and to provide a mature woman's appeal. Henry's just as attracted to her as he is to his nubile paramour, Princess Alais of France, played by the comely Kory Taylor. The challenge of the perhaps imminent royal succession presses upon these sentiments, however, and Henry's sons variously repel him, anger him and appall him. Ameer Mobarak as Richard (later "the Lionhearted") is unremittingly surly and resentful; Chaz Francis plays John, Henry's favorite, as spoiled and mostly clueless; while Ethan Epperson-Jones as middle child Geoffrey the schemer is well spoken but at times saws the air with his hands as if he doesn't quite know what to do with them. In contrast, Jeron Tucker as Louis of France is contained, assured and calmly attentive, an exemplar of royalty for Henry's three wannabe boys.

The central contest, of course, is between Eleanor and Henry, played by Jason Jones. Eleanor consistently wins, even -- perhaps especially -- when she is defeated, for example in the scene shown above where she witnesses Henry's attempt to reassure the princess, Eleanor's rival and earlier ward. Jones is forthright and fights a good fight, but he's outclassed by Stoub. In this story Henry must show visible ruthlessness to offset his tender moments. One occasionally senses that Jones the actor contains more human kindness than would an aged king on the brink of eternity.

The Lion in Winter is wordy but brilliant in its rhetoric. Director David Schneider has successfully taken on the challenge both of the script and of making the audience care about these characters as they wrest their way through deep and vital conflicts. This is the opposite of the facile entertainment of Facebook, news flashes and text messages; this is story telling of demanding engagement, all the more rewarding for the challenges it presents.

The Lion in Winter
by James Goldman
Gaslight Baker Theatre