Review: The Curious Incident of the Dog in the Night-Time by Zach Theatre
by David Glen Robinson

Zach Theatre has done itself Austin-proud with The Curious Incident of the Dog in the Night-Time by Simon Stephens.  Producing Artistic Director Dave Steakley directs an exceptional cast of Austin talent in a brilliant contemporary play set in England.

Publicity material for The Curious Incident of the Dog in the Night-Time (hereafter Curious) does the production a disservice by describing only the first five minutes of the show and not even generalizing about the enormous themes and heartfelt treatment of them in the rest of the longish play. In that short beginning, a boy played by Preston Straus opens the first scene by staring at a neighbor’s dog, Wellington, stabbed fatally with a garden cultivating fork. The police arrest the boy for the crime, then let him go. The brush with the law focuses the boy enough for him to resolve to solve the crime. 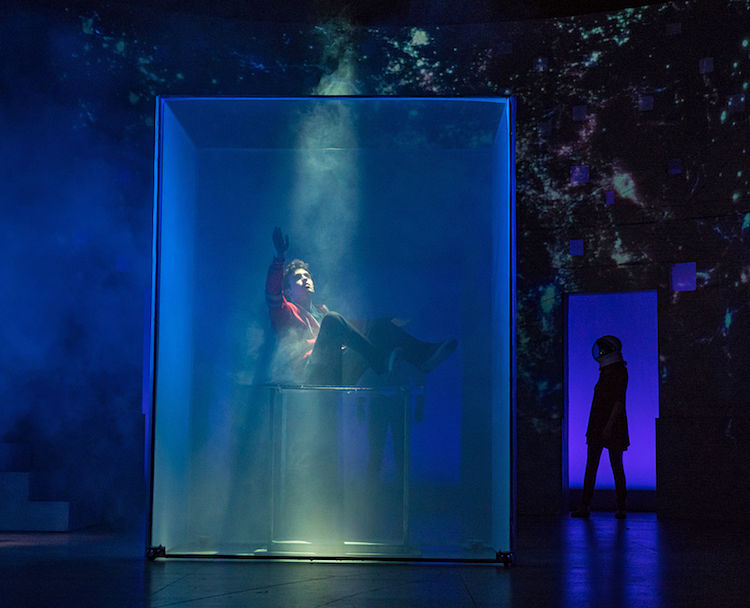 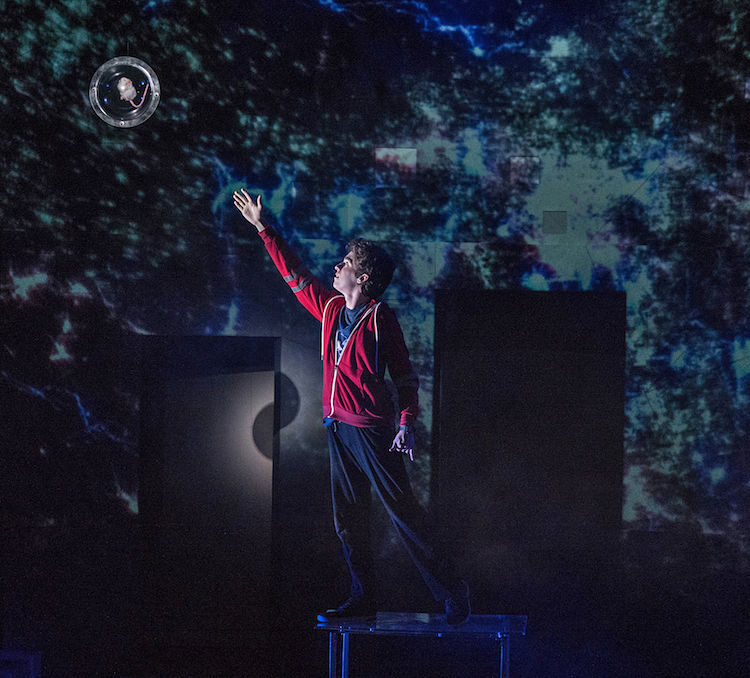 This material is presented efficiently and discarded, serving important only to establish the character of the boy, Christopher Boone.  Christopher is autistic and has Asperger’s Syndrome. The world around him is an extremely frightening and incomprehensible place where he and all other autistic people must live out their lives.

Christopher has strong reactions when touched, signaled in the production by the electric flashing of LED lights in a lightning pattern on the upstage screens whenever he is so violated. Christopher never lies; he asks incisive questions; Christopher has a memory you and I can only envy; he loves and wears the color red; he hates the color yellow; he takes scrupulous care of his pet rat Toby.

The play proceeds linearly through a series of events like gems strung on a necklace of time that holds Christopher deeply and forever. He seems to commemorate all of the incidents and trainwrecks in paper lanterns he attaches from time to time onto a framework flown in from the lighting grid.  There they glow through the remainder of the play. By the time the titular crime is solved en passant, nobody cares. 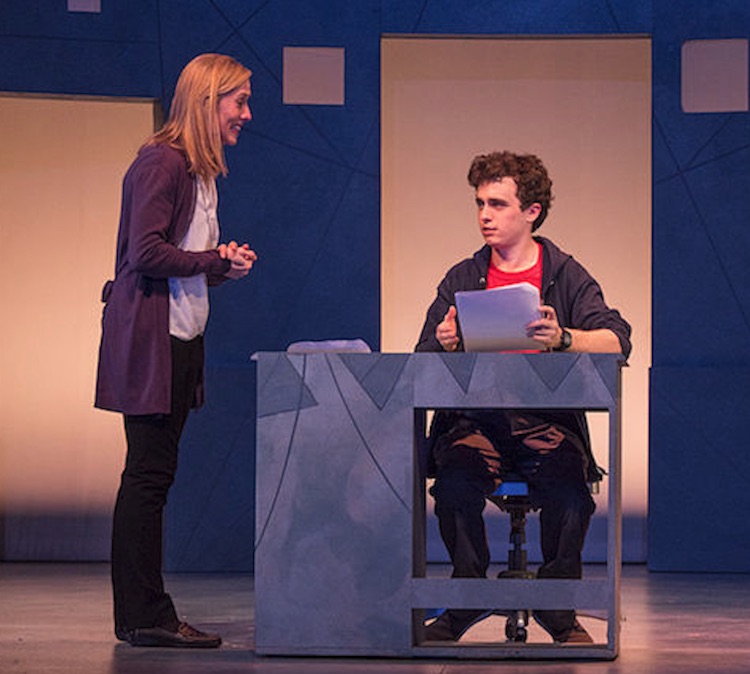 Act II transforms the play again; it becomes an updating of The Odyssey for autistic populations in the twenty-first century. Christopher bursts the bonds of his interior isolation, only to find exterior isolation and fear on a journey to London. Here also is a slice-of-life depiction of middle class Britons, a Dickensian narrative for our time, full of humor and the hurly-burly of modern life. The largely Austin-resident cast performs these sections with exquisite timing and good British accents, sharp and almost barking in their elocution. Credit goes to dialect coach Amanda Cooley Davis. 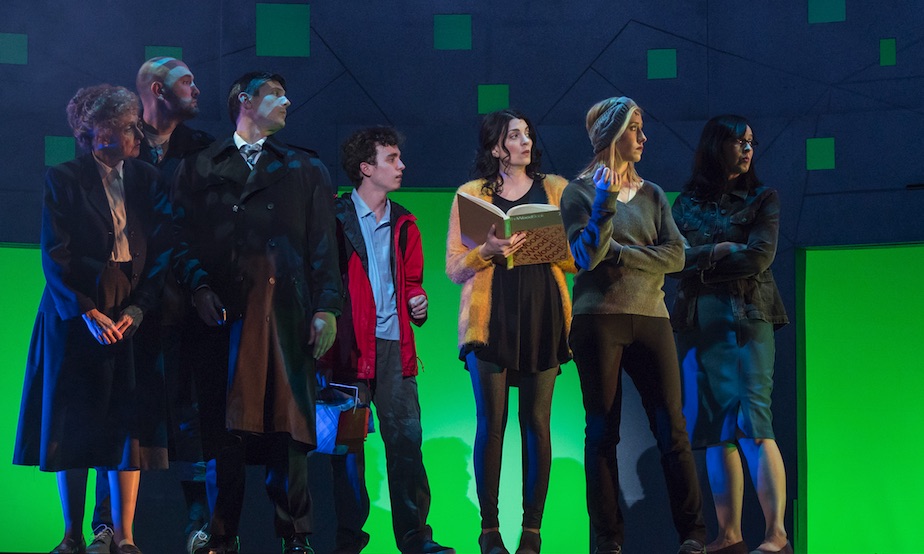 The design fields showcase the Topfer theatre’s advanced technical potential. Lights, video, and projections coordinated with the action of the story, especially when masses of yellow were flown and dropped in when Christopher was vexed by that color (the yellow vests of the police were wry blooms in the forest of Christopher’s discomfiture). But at times, the media blasts were overly eye-dazzling and jumbled, leaving one to suspect that the designers took a “one from every menu” approach to loading their design palettes. Borrowing from another branch of the graphic arts, some of the design work in Curious might be termed “overPhotoshopped.” 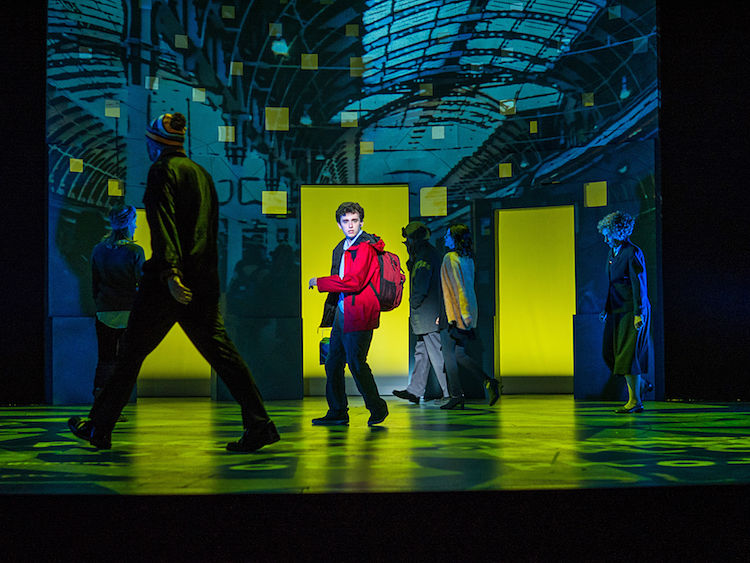 This production of Curious has the right to stand proudly with any other national production of the script. At the end of the show, we had a catalog of the tortures suffered by the autistic, despite the rah-rah finale, but no real look at the condition from the inside. If that seems like an impossibility, we offer the counter-example of therecent brilliant independent play, Gibberish Mostly, by Austin's Max Langert.

Despite all these fine points The Curious Incident of the Dog in the Night-Time is inspiring for the tremendous heart with which it treats its subject. The production finally transcends itself by heightening our awareness of all the differently abled people all around us. The play might be embraced as instructive for children and young adults were it not for the explosive blasts of blasphemy and vile British poo-poo mouth in its first five minutes. That odd insensitivity in the playwriting must remain a minor mystery. Most adults are immune to such language, however, and are likely to revel in this play.

The Curious Incident of the Dog in the Night-Time runs at the Topfer Theatre at the Zach Theatre Center until March 4, 2018.

The Curious Incident of the Dog in the Night-Time
by Simon Stephens, adapted from Mark Haddon's novel
Zach Theatre

Special Events in celebration of The Curious Incident of the Dog in the Night-Time:

Tickets start at $25 and are available online at zachtheatre.org, by phone at 512-476-0541, or in person at the ZACH Theatre Box Office, in the Topfer Theatre, 202 South Lamar Boulevard (corner of Riverside Drive and South Lamar) Monday through Saturday, 12– 5p.m.  ZACH Theatre is wheelchair accessible.  Discounts are available for groups of 8 or more. Student Rush Tickets are $20 one hour before show time (with valid ID).

Age Recommendation: Ten and up for some strong language

Run time: Two hours and 35 minutes including one intermission.