You need ingenuity if you're a small theatre company facing Austin's squeeze of performing space. Equipped spaces are recording reservations well out into 2019. On the other hand, if you're a determined ad hoc band of performers not worried about the inquisition forces of the City of Austin, you can put up your tents virtually anywhere. The world is wide. And if you have no tents either, the woods are lovely, dark and deep. 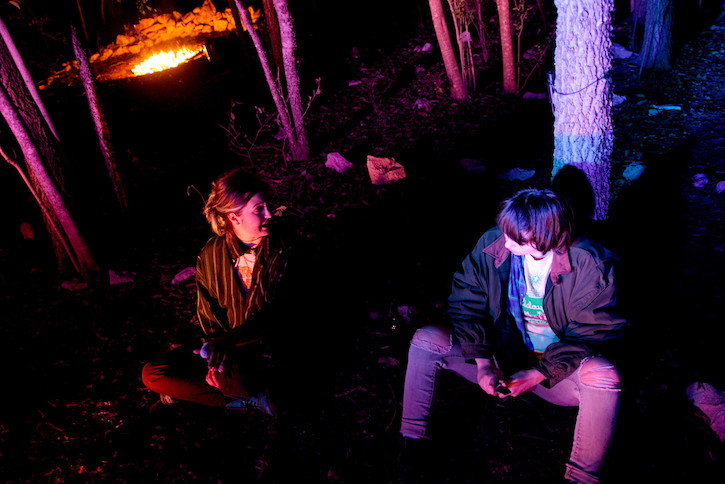 Bottle Alley Theatre has made an art of making art in minimal spaces, and playwright/director/general factotum Chris Fontanes has found a scrap of woods off East Riverside in Austin that'll give you the impression of being in primeval forest or in the primordial mind. Apocalypse is the title, a declaimer that brings to mind lots of CGI, crumbling buildings and the end of the world as we know it -- visions that have become all too possible in our days.

But this four-person meditation is not a large-scale apocalypse; it is a private, personal serial apocalypse, taking place within three women virtually simultaneously, provoked by Corinna Browning as Lucinda. She is an apparition appearing separately and differently to each of the others, and she is plainly and unmistakeably the devil.

Muffled against the October-November chill of Austin, the audience files down a pathway to a wide space lit far stage right by a bonfire. The flames flare at first, fed by tender wood, but they gradually subside during the hour of action. They provide atmosphere, not illumination, for the company has rigged a informal scoops to light the playing space in pinks and purples. Once settled, you'll see the back of someone standing on the far side of a tree. With deliberate pauses and the nonchalance of the isolated, Polly will come around and settle on the ground, facing you as if you weren't there.  Which, for purposes of this meditation, you are not.

She's a fugitive, hiding out in the woods but not caring too much about it. Cyerra Sanchez as Polly maintains a stolid, stoic, almost indifferent attitude, even when her -- not friend, perhaps, but acquaintance -- Mercy (Brittanie Esty) comes slipping past the tree trunks out of the blackness. Their exchanges in restrained and reticent speech provide some background. There's a price on Polly's head. Posters have gone up offering $20,000 in reward. She carried out some sort of terrorist attack, and she's thinking of another, probably targeting a hospital so as to achieve the maximum damage. 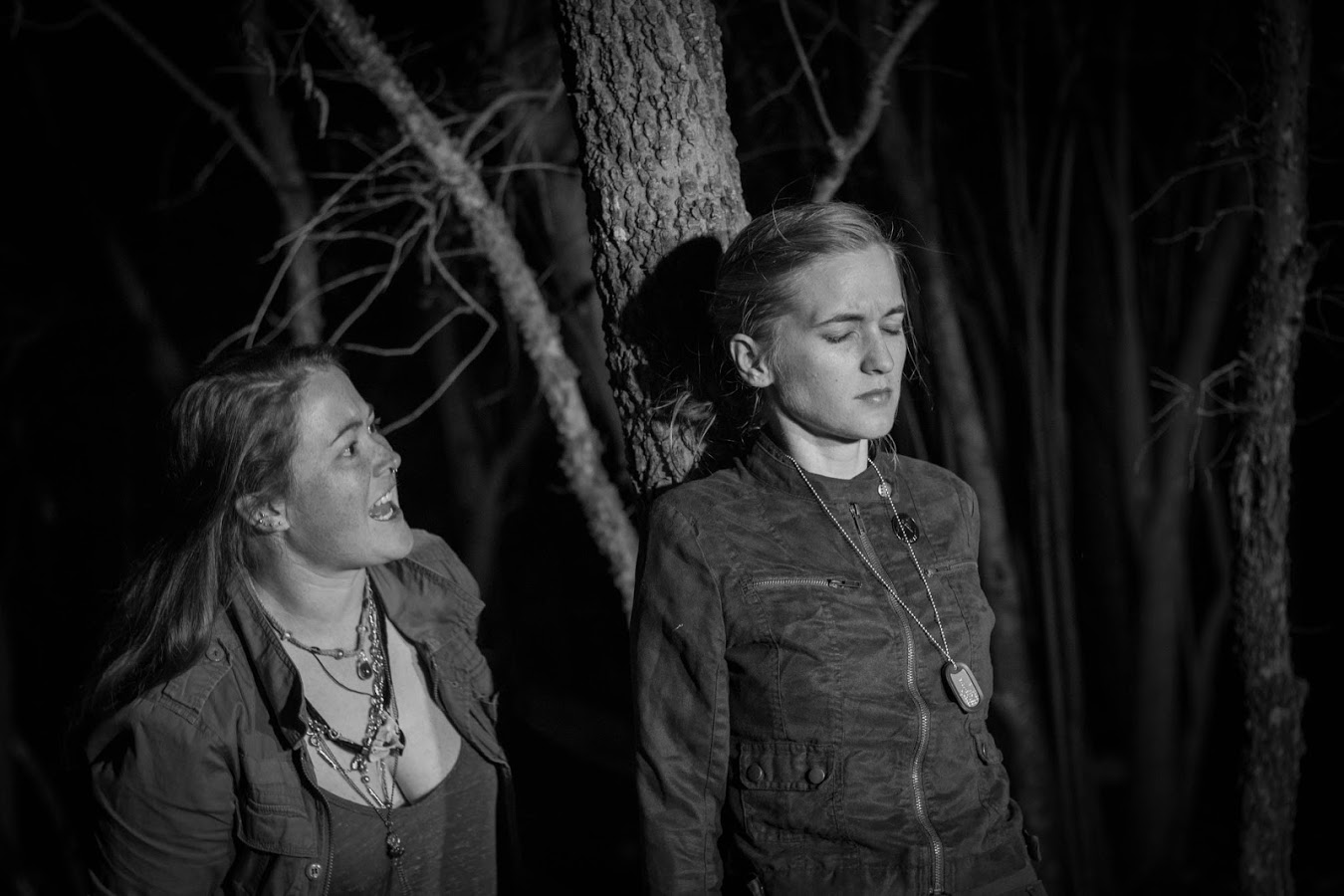 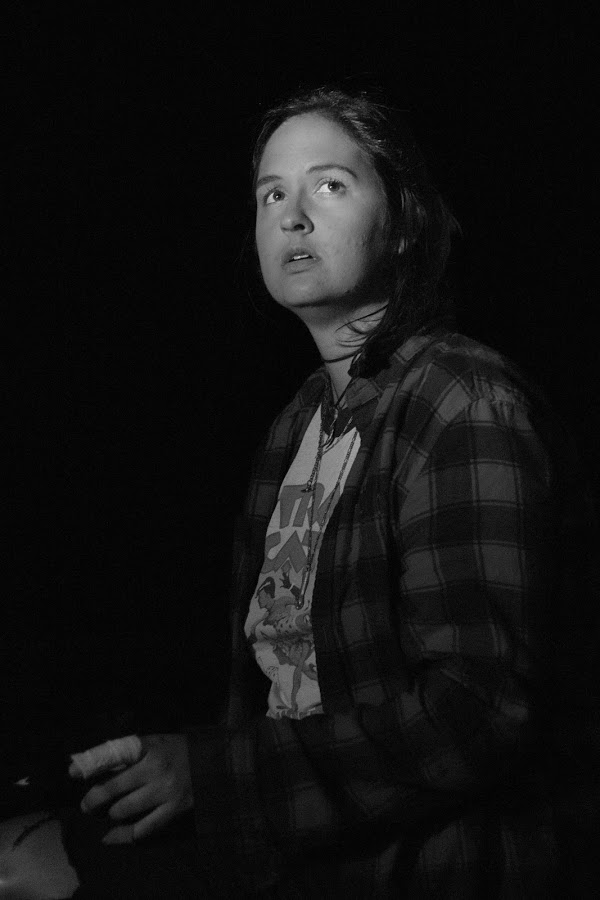 That's approximately the point where the plot sinks away into the mulch of this forest locale. Corinna Browning swings out of the darkness and visits each of the other three women, in isolation, adapting a different persona each time. In her role as devil/provacateuse for Mercy, Browning is loquacious and changes accent; she eggs Polly on toward violence and destruction with little explanation for such an approach; and with Alice, the third of these lost women, played by Rachel Holderbach, the devil woman is stubbornly and eternally silent.

Fontanes as playwright/director/facilitator is again exploring the hauntings that dwell within and the isolation that leaves us prey to them. The most attractive personality by far is Lucinda the devil, for she has the power to assume a pleasing shape, seducing each according to her weakness. There's an anomie to each of the other characters, who despite personal histories remain vulnerable. The woods becomes a mute representation of the unconscious and of the great vague uncertainty wrapped about us.

Apocalypse succeeds as an evocation not of the classic notion of apocalypse, the world ending in fire or in ice, but in intimate finales of accumulating inertia and unknowing. Three of the women in this cast offer interpretations laden with meaning and begging for further background; the fourth, Browning, is vivid, mercurial and ready to furnish you and her victims with whatever all of you think you want. 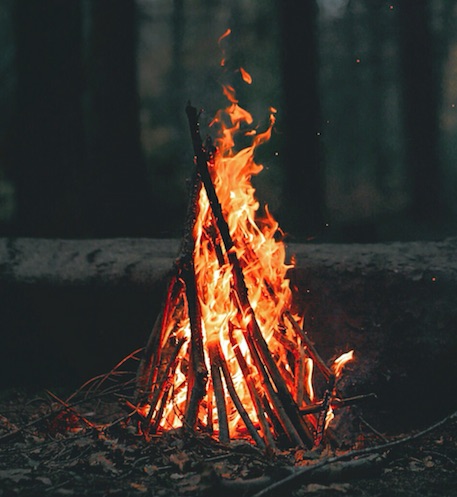 DOORS: The house will open at 8 with the performance beginning at around 8:15, or as soon as everyone has arrived. Please plan on arriving no later than 8:15. The performance shall last about an hour with no intermission.

LOCATION: Performances shall take place at The Farm, located at 2202 Riverside Farms Rd. Look for an Apocalypse sign with a light in front of a driveway.

PARKING: You can park directly across the street at the Iron Worker's Union or anywhere along the street but PLEASE do not block anyone's driveway or mailbox.

FRONT OF HOUSE: There will be water, soda, cider and a paired drink that we will be giving away for donations. Small bills in CASH are greatly appreciated.

AUDIENCE WARNING: For those of you who are familiar with Bottle Alley shows, you already know what to expect. For those of you who have never been to one of our shows, welcome! We do weird things in weird places. Don't be afraid. Your safety is our first priority. That's why we want to let you know what you are going to be getting into: First of all, the play takes place outside so prepare to be exposed to the elements. Bug spray will be provided. To get to the performance space you must walk down a short path to a clearing. The play takes place in a wooded area that will be both secluded as well as dark. It is an immersive experience that will take you into the heart of where this coven goes but don't worry, it is perfectly safe. Just take it slow and watch your step.

RAIN CANCELLATION POLICY: As fun as it would be to do this in the rain, if it DOES rain we will cancel the show. If this happens you're tickets will be either refunded to you, or you'll have the option of coming on one of our other performances at no additional cost. 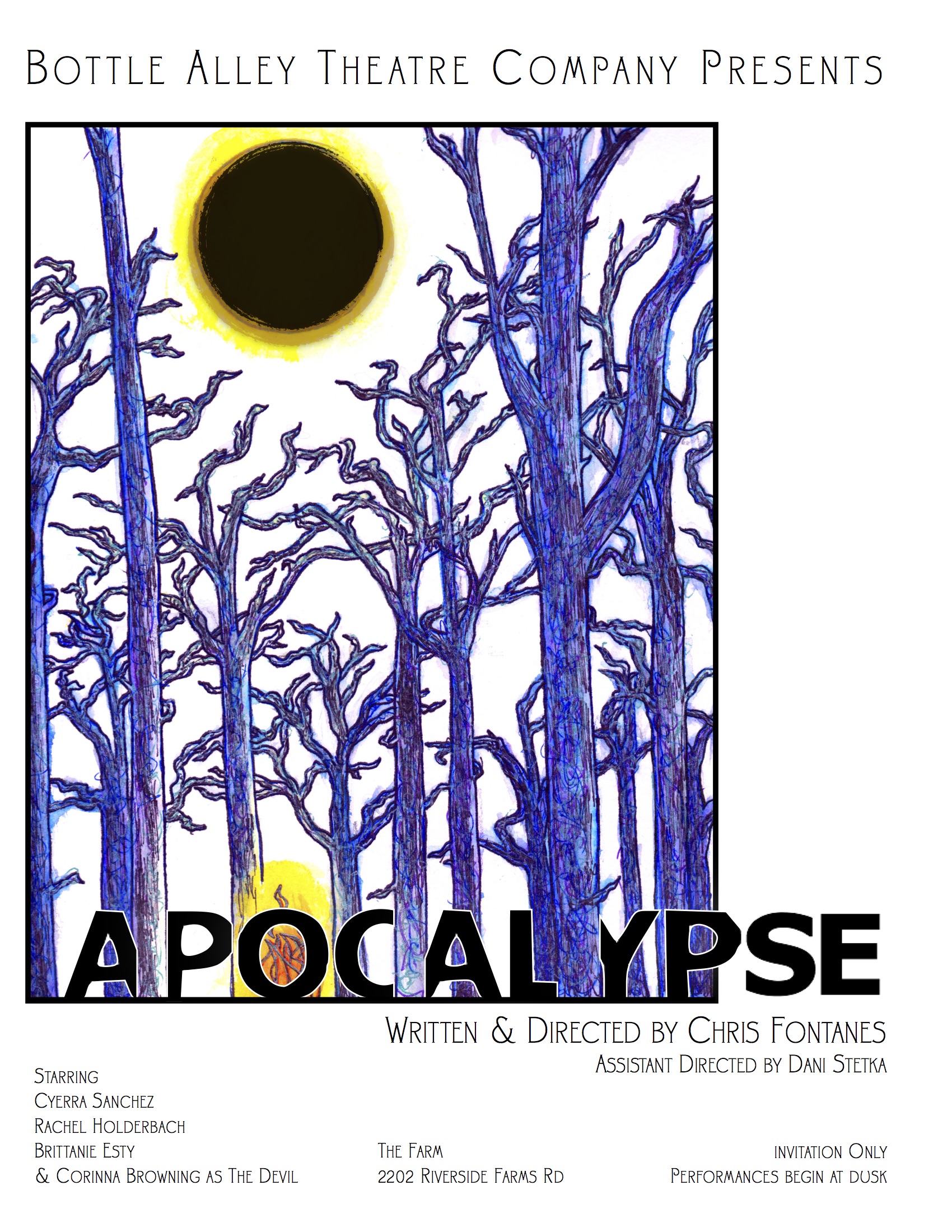