Review #1 of 2: Cages by Southwest Theatre Productions
by Michael Meigs

The overwhelming impressions are dark and stark. 'Stark' both in the sense of sharply contrasted in color and outcome, and 'stark' in the etymological sense of 'strong' and 'powerful.' Leonard Manzella's Cages is not entertainment; it is an orientation to a hell that few of us know but all too many of us suffer.

Playwright Manzella will step out on stage after the performance. He wants you to understand what he has done and seen as a counselor and psychodrama therapist at, among other places, the jails and prisons of California. For just as Cages is not entertainment, it is not fiction. Or rather, it offers only a thin veneer of fiction, to protect and obscure the real human beings Manzella encountered in his hegira from the Italian film industry of the 1970's to the wastelands of incarceration and unredeemed lives. 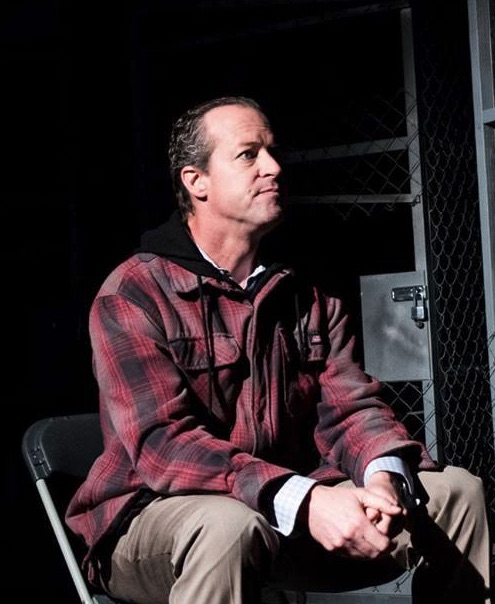 There's a seething anger in the inmates portrayed, in the events advertised in the program, and in the indignities of the administration of justice in this early 21st century. As Manzella explains after you've survived the theatrical experience, it's the Federal government that mandates the provision of mental health services to the incarcerated. Without that national-level requirement these prisoners, many of them kept utterly isolated 23 hours a day, would be left to sink even farther into psychosis.

The playwright arranges his memories of confrontation into a wobbly story structure. Ph.D. psychologist Tom Morri is struggling with his own demons after a patient's suicide, and his principal aim is to get through the two long years left before he can retire. He's sent to conduct weekly therapy discussions with five hard-case prisoners. They live sequestered in 'administrative segregation,' barred from human contact, and each stands in a narrow cage about the size of a telephone booth. Getting them to talk is a perilous undertaking. Forced to that task, Morri is doing everything he can to shield his own psyche, posing the right questions but delivering them in a distant, deadened voice.

That's the core of the story, a series of interviews in a black pit of hopelessness. The playwright works others into it: a surly, brutalized supervising prison guard (Cliff Kammerdiener) and brittle female psychologist Dr. Sally Stein (Regan Goins). The unseen warden's cheerily menacing voice broadcasts punctuate the evening. 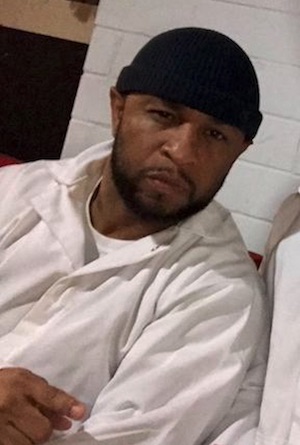 The approach is formulaic. As in those old war movies, you get to know this ragtag platoon through dialogue as they snarl and mock and, eventually and inevitably, reveal themselves in set pieces, monologues delivered as if in a final accounting, each spotlighted alone and vulnerable on the forefront of the stage.

Manzella succeeds in differentiating the five prisoners, but the actors themselves give them life. Ronnie Williams, Sam Domino and Omarr Cantu make us shiver as we glimpse the brutalities and disadvantages that brought them here. Jay Windsor as Inmate Fargo brims with a manic energy, anticipating a release that will never happen.

Marc Pouhé, regularly seen as a heroic figure on Austin stages, wears a bizarre plastic mask and gag when he first appears. He inhabits a charcter hounded by multiple personalities, dominated initially by his inner violent 'Roland' but gradually struggling to emerge as Darryl, a gentle, frightened Teddy bear reaching out to Dr. Morri for help. Pouhé vibrates with energy and urgency. His changes aren't mood swings, they're precipitous, slashing conversions. In an actor of lesser conviction these self-dialogues would touch on the comic. Pouhé gives you the sense that he's at his own throat and the feeling that his inner violence is humming with a high, almost audible threat. 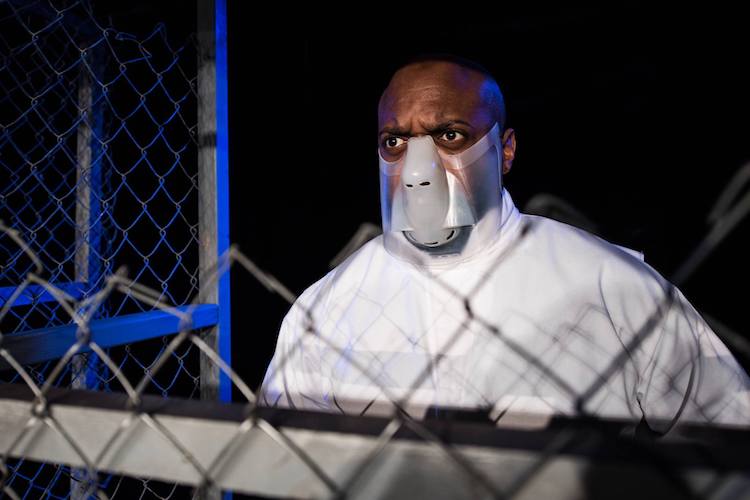 Joe Bunner isn't the lead -- Dr. Morri is essentially a passive victim and witness -- but his flat, guarded delivery makes it difficult for us to feel much sympathy for him. At the end of the evening he's additionally disadvantaged by the passionate intervention of playwright Manzella. Bunner, we understand, is a surrogate for Manzella, but the author of the piece has an intensity that his imagined counterpart lacks, both in the script and in the performance.

Cliff Kammerdiener is a credible heavy as the guard as twisted as those he's herding. I'd have liked for director Kat Sparks to have worked more closely with him on diction and speed of delivery.

Straight-talking and self-aware, Regan Goins gives Sally Stein the psychologist a credibility beyond that written into the script. Goins delivered a memorable Blanche Dubois in the Texas State Streetcar Named Desire two years ago. Her performance in Cages is further evidence of the intellect that powers her acting ability. 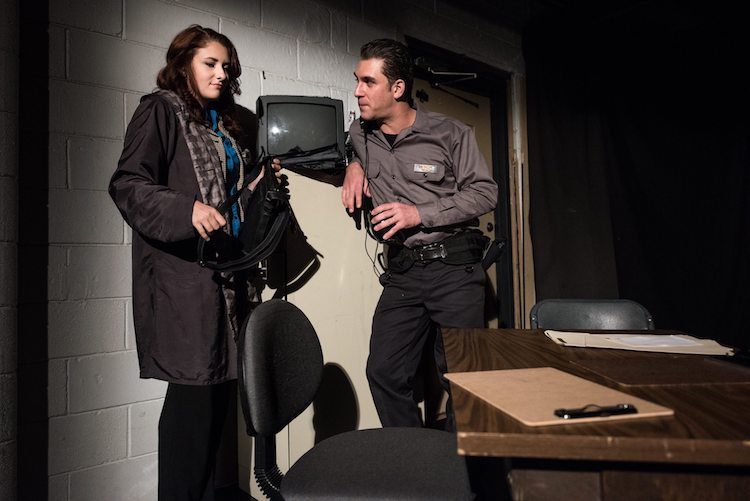 Cages is didactic, the application of the power of imagination and acting to teach and admonish. It's not a comfortable evening, and that's to the credit of all at Southwest Theatre Productions -- as well as to Ryan Salinas, who's in the process of converting this East 7th Street performance space from a dance studio to a locale potentially of great importance to the venue-starved Austin theatre community.

CAGES runs for two weekends only at the Santa Cruz theatre, Thursdays - Saturdays at 8 p.m. and Sundays at 4 p.m.

Santa Cruz Theatre, home of Aztlan Dance Company, is at 1830 E. 7th Street, Austin, directly across from Huston-Tillotson University on the east side of I-35.

Parking is free on the theatre lot as well as the adjacent Planned Parenthood parking lot.

Wine, soft drinks, water and other beverages are available for purchase as well as snacks.