New on the scene, Southwest Theatre Productions provides an intimate experience with Gina Gionfriddo's 2012 play Rapture Blister Burn due both to the staging in the Salvage Vanguard's tiny studio theatre and to the subject matter: a middle-aged triangle of marital regrets served with lectures on the awakening of feminism in the twentieth century.

Gionfriddo sets out to demonstrate that theories of sociology fall short of providing a philosophical basis for living one's life. Writer-lecturer Catherine (Suzanne Balling) is reputed for her (vaguely described) books and lectures; she made the choice years ago to leave her beau Don (Scott Gilbreath) for graduate studies in England, and he rebounded, marrying her roommate Gwen (Kristin Chiles).

It's 15 years further down the road, and all three are close to mid-life crises.  Career woman Catherine is single and lonely, yearning for the road not taken; Don and Gwen, foundering in second-tier academia, have two children and lives of moody emptiness.  You'd hardly think it a good idea for him to invite his former flame to teach a summer seminar on feminism at the college, but then that would deprive your playwright of a construct full of potential.

The selective press quotes on the poster suggest that the play's a laugh a minute, but this production produces hardly a chuckle. Gionfreddo brings us into three class sessions to sit through glib talk about, inter alia, the opposing constructs of Betty Friedan (The Feminine Mystique) and Phyllis Schlafley, while the three principal characters wrestle with their own dissatisfactions. The flow in the seminar is hardly helped by the fact that there are only two students: Don's wife Gwen and their babysitter Avery (Adrienne Brown).  Avery is young, chirpy, independent and apparently free of all that pink baggage the other women are carrying.  The cast is completed by Alice (Mary Kennelly), Catherine's mother, entirely comfortable living without a man in her own life.

As I engaged with these characters -- and I did, indeed, engage with them -- I was getting an eerie feeling of déjà vu. Director Fritz Ketchum and all three principals were involved last May in Edward Albee's A Delicate Balance at the City Theatre. The actors weren't in exactly the same relationships, although then as now Galbreath was the wounded alpha male, Balling was the cheeky outsider, and Chiles was high-strung and haunted. Written fifty years apart, the plays depict astonishingly similar views of a middle class American life sunk in anomie and regularly dosed with alcohol.

Scott Galbreath gives Don the unachieving educational administrator a heavy warmth and vulnerability, making him a man well aware of his own lack of ambition. He grabs at the opportunity of Catherine's return in a resurgence of adolescent hopes.  Chiles, saddled with the Schafley housewife role as dependent mother of a young boy and a mid-teenager, has a fixity about her arising from the years of trying to manage a marriage and household; as all are tested by the plot developments, Chiles comes across as the strongest and most capable. And Balling, a sprightly actor, here has a curious new artificiality to her persona, a falsity of expression in lecture and in address that must be intentional, Catherine's mechanism for coping by refusing to reveal herself.  When emotions break through that façade in some of the scenes with Galbreath, the result is powerful.

There's not much comedy here, perhaps because both the mother figure and the millennial show little empathy, concern or understanding for the central triangle. We might be brought to laughter if their (our) preposterous yearnings for unfilled desires were deftly deflated, but that doesn't happen. 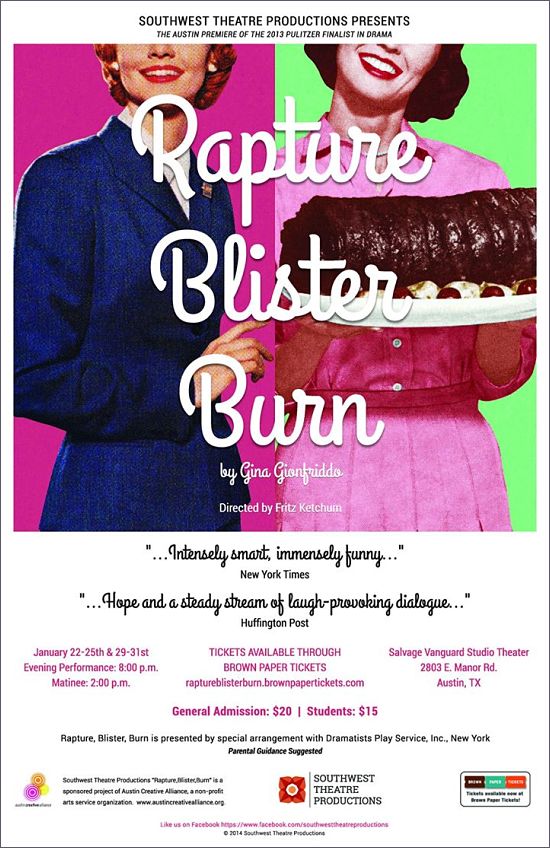