Review: The Lion King by touring company
by Michael Meigs

The Gazelle touring company of Disney's The Lion King has settled into the cavernous Bass Concert Hall at the University of Texas.  The place was filled for the official opening, and the crowd wasn't disappointed.  This imaginative spectacle delighted us all with its puppetry, dancing and heroics.

I knew the movie, but I'd never seen the stage production. Now I understand the enthusiasm that has greeted this piece since its 1997 debut in Minneapolis and then on Broadway, where it won six Tony awards including that for best musical. The color, the movement and the dancing are magical. Director Julie Taymore and her imaginative cast and crew created from Disney's animated film something rarely seen on the American stage: a coming-of-age fable that's equal parts ballet, operetta, puppet show and sugarplum dream.

The Lion King, like so much of Disney, is a reassuring tale of youthful quest, conquest of adulthood, and triumph. The hero and heroine are sweet and unblemished, and the villains are comical. That one early touch of disaster, the death of the warm, supportive father-king, is inevitable and in some way tonic. It's a very gentle reminder of the generational losses that as mortal human beings we must always face (the king is dead, long live the king), alleviated by the simple mysticism of imagining those shining stars in the night sky to be our benevolent ancestors looking down upon us. Our hero Simba's only real sins are those of youth, somewhat like those of Henry IV -- impulsiveness, naïveté, flight from responsibility and keeping bad company (though not too bad, for Timon and Pumbaa are happy goofs, not real wastrels). There's even a fairy godmother in the character of Rafiki, the baboon conjur-woman (the ebullient Buyi Zama with her terrific vocal power).

Because we all know this simple story from the film and recall it with affection, the makers of the stage production don't have to worry very much about narrative clarity. They're free to fill it with sound, swirling ballet, arias, clowning and additions to the movie score of Elton John and Tim Rice. Wicked ol' Scar (Derek Smith) sneers with fine clarity; Mufasa the king (Dionne Randolph) and grown-up Simba (Jelani Remy) share pretty much the same character and crisp diction. Only the trio of hyenas (Rashada Dawan, Keith Bennett and Robbie Swift) are hard to follow in their quick banter and crazily swinging puppet-headed costumes.

Let's heap benedictions on the geniuses who designed the array of puppet animals, especially the creators of the two enchanting giraffes, the lumbering elephant, and the gracefully bounding bicycle-linked herd of gazelles. Timon the meerkat and Pumbaa the warthog are doubly amusing, both for the imaginative puppet-costumes and for the actors visibly inhabiting them. Under that wild wig, Ben Lipitz appears as much of a chubby doofus as the warthog figure wrapped around him, and greened-out Nick Cordileone smirks and wisecracks like a bunraku shadow of the meerkat.

This is a fantasy Africa, of course, although most of the members of the huge young cast are people of color. The predominant references are to southern Africa and to the eastern savannah. As a former West Africanist I was pleased to recognize shapes, textiles and garments I'd known in French-speaking countries. The music is largely pop-inspired, featuring south African harmonies and generous participation from the busy percussionists perched in our view on either side of the stage. The rest of the 13-piece orchestra is tucked away in the pit.

The Lion King is with us until mid-February, and half-price student rush tickets are available during the week. 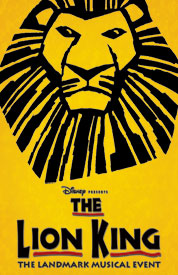