Going into rehearsal in the fall and opening in January will be Ronald Harwood's comedy, "QUARTET," which was also turned into a recent film, starring Maggie Smith and directed by Dustin Hoffman. Already cast in the roles of four retired opera singers who reside in an assisted living facility and each year participate in a concert to celebrate Verdi's birthday are Carla Daws, Larry Oliver, Allan Eastwood and Judith Laird as Cece. By turns funny and poignant, the play centers around Cecily, Reggie, Jean and Wilfred. Jean, who used to be married to Reggie arrives at the home and disrupts their equilibrium. She still acts like a diva and refuses to sing. Patrons who love opera or hate it will enjoy this story of coming to terms with the so called "golden years," and the personal challenges that come with them. 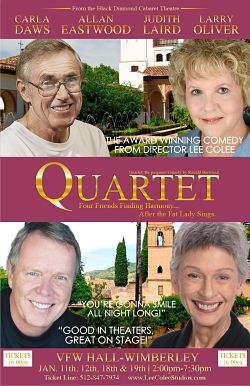 The new Black Diamond Cabaret Theatre will present a mixture of musical theatre, intense drama and poignant comedies to Hill Country patrons in its first full season.  Performances will also act as …