Marissa Austin, Executive Director of Georgetown Palace Theatre, Inc.,and the Palace Board of Directors announce with great pride and excitement that the Palace’s Envision Campaign will continue!  In just three short months’ time since the Envision Campaign began, the Georgetown Palace Theatre has raised over $810,000 toward the building of a Palace Children’s Theatre – just about $190,000 shy of the $1 million needed to meet a three-month challenge grant made by an anonymous donor. 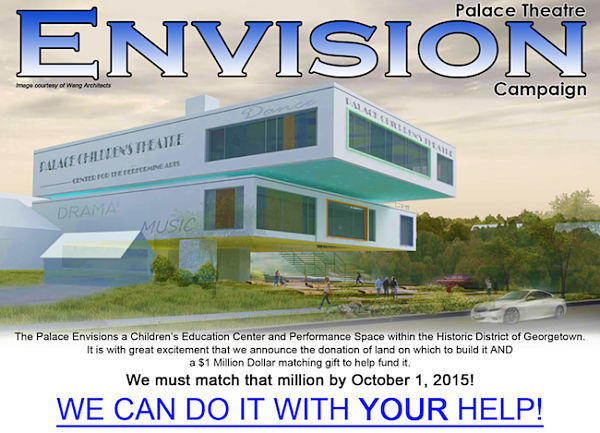 No longer anonymous, the Palace’s super hero is none other than Georgetown’s own Doug Smith! So impressed was Doug with the Palace’s efforts and the community’s support, that he has agreed to match all gifts and pledges that have come in so far AND will continue to match through November 1st all incoming gifts and pledges up to his original $1 million pledge. Doug Smith is a champion for our community, our theatre, and our children. Not only did he pledge the $1 million and light a fire under everyone with the October 1st deadline, he personally spent a great amount of time assisting in the fundraising efforts.

The total amount required for the Envision Campaign is estimated at $2.5 million; by November 1st, the Palace plans to be at or very near the $2 million mark, thanks to a lot of dedication and hard work by Marissa Austin and the Palace Board of Directors and to the generosity and commitment of Doug Smith.

Within mere weeks of that charitable donation, an Anonymous Donor (aka: Doug Smith) had challenged the Palace Board of Directors to raise $1 million to match his $1 million donation – and to do so by October 1, 2015. Although it was about the first of July when the gauntlet was thrown down and October 1 was only three months away, the Palace’s Executive Director never looked back!  With her list of loyal Palace Patrons in hand and her fundraising abilities sharp, Marissa Austin proved up to the challenge.

Artistic Director Mary Ellen Butler assisted with Palace entertainment at all events, and all members of the Palace Board of Directors participated in the fundraising events and made donations within their abilities to do so.

At the monthly meeting of the Board of Directors on October 1, Doug Smith stood before the group and took the mystery out of the identity of the Anonymous Donor!  And the Board voted to move forward immediately with the Envision project so that in the end the Palace will have an incredible facility for children’s theatrical education, right here in Georgetown.

Click to go to info and donations pledge at www.georgetownpalace.com