The Fredericksburg Theater Company is pleased to announce the cast for their upcoming production of the Andrew Lloyd Webber and Tim Rice musical Evita. Veteran theater artist Jim Weisman helms the production and will also design the scenery.

The true story of Argentina’s controversial First Lady, Eva Perón is the subject of this dynamic musical, considered to be one of the greatest achievements of the American theater. Told through a compelling score that fuses haunting chorales with exuberant Latin, pop and jazz influences, Evita creates an arresting theatrical portrait as complex as the woman herself. As an impoverished fifteen year old, Eva escaped her dirt-poor existence for the bright lights of Buenos Aires. Driven by ambition and blessed with charisma, she was a starlet at twenty-two, the president’s mistress at twenty-four, and First Lady at twenty-seven. She was considered a saint by Argentina's working-class, reviled by the aristocracy and mistrusted by the military. Eventually, she left a fascinating political legacy completely unique in the 20th century.

Playing the role of Eva is Kristin DeGroot, who last appeared on the FTC stage in Crimes of the Heart and Les Misérables. San Antonio actor Joseph Urick will be playing the role of revolutionary Ché. Argentina's dictator; President Juan Perón, will be portrayed by FTC regular Jeff Jeffers.

Music Director for the production is Ryan Bailey. The choreographer is Ashleigh Goff. Courtney LeFan serves as the Assistant Director. The Costume Designer is Sher Bottjer. FTC's Artistic Director Kerry Goff is the Lighting Designer. The Stage Manager is Dawn Hahn.

Evita is Jim Weisman’s 11th collaboration with the Fredericksburg Theater Company. During the past four years he has designed the scenery for Fiddler on the Roof, Les Misérables, Oklahoma!, A Funny Thing Happened on the Way to the Forum, The 1940’s Radio Hour, Honk!, Godspell and Oliver!  He also took the task of directing Forum and Les Misérables. In 2008 he directed FTC’s first Shakespearean production, The Merry Wives of Windsor. For the 2006 production of Beauty and the Beast he designed and supervised construction of the costumes for Cogsworth, Madame de la Grande Bouche, Mrs. Potts and Chip, as well as the “Be Our Guest” characters.

Mr. Weisman currently lives in Austin where he is co-owner of a specialty painting company with his long-time friend Linda Messina. The company, Especially Faux You, specializes in faux finishes and effects, murals, mosaics, glass etching and stained glass. He has been a resident of Austin, off and on, since 1978, designing for KLRU Public Television, the Zilker Hillside Musical, the University of Texas Opera Department, Austin Community College and many Austin theatres, including Zachary Scott Theatre Center, the Austin Shakespeare Festival, and Capitol City Playhouse.

He began his directing and designing career at the Circle Arts Theatre in New Braunfels, his hometown, and directed and designed The Pirates of Penzance for the Summerfest Theatre at Southwest Texas State University in San Marcos. In 1982 Jim traveled out to California to serve as Production Manager for a showcase production of Catch-As-Catch-Can at the Cast Theatre in Los Angeles. During the 1990’s Jim lived in Portland, Oregon, working as Technical Director, and later Production Manager for the Portland Repertory Theatre. After four year’s residency at Portland Rep, he returned to freelancing as a scenic and lighting designer for performing arts groups throughout the Pacific Northwest until his return to Texas in 1999.

Mr. Weisman has had a long history with the Point Theatre in Ingram, beginning as a college intern and director of the children’s theatre program in the summers of 1975-76. From 1979 to 1982 he was the resident director and designer, presenting the Point Theatre’s first productions of My Fair Lady, Camelot, Oliver!, Fiddler on the Roof, and Man of La Mancha. In 1985 he was resident scenery designer for the summer season, returned in 1998 to guest direct The Music Man, and again in 1999 to direct and design A Funny Thing Happened on the Way to the Forum. What was intended to be a six-week stint at the Point became another resident stay for Mr. Weisman when he was offered the position of Theatre Director at the end of that summer season. During the next four years he produced a full season of shows on both the indoor and outdoor stages. Some of his favorite productions from those seasons include Joseph and the Amazing Technicolor Dreamcoat. The Pirates of Penzance, Lend Me A Tenor, and The Complete Works of Wm Shakespeare (abridged). Mr. Weisman also adapted and directed several Shakespearean plays on both stages, including Much Ado About Nothing, As You Like It, Twelfth Night, and a one-act version of The Merry Wives of Windsor. From 2008 to 2010 he returned to the Point as guest director/designer for Robin Hood, Treasure Island, Beauty and the Beast, and Cats.

Performances for Evita will be June 19 through July 5, Fridays and Saturdays, at 7:30 p.m., Sundays at 2:00 pm. A special 3:00 pm matinee performance will be held on Sat., July 4th. Admission is $29 for adults, $12 for children 17 and under. Seating per show is limited to 250 persons. Tickets can be purchased online at www.fredericksburgtheater.org beginning June 1st for donors and June 8th to the general public. Reservations can also be made at the box office, 830-997-3588. An answering machine will capture requests after hours. For more information or directions, visit www.fredericksburgtheater.org. 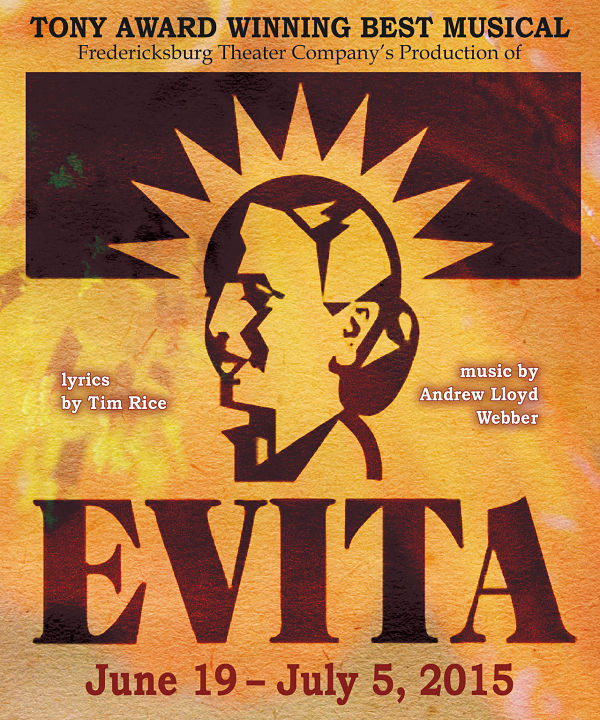