Here’s a glimpse at the 2022-23 Temple Civic Theatre season: 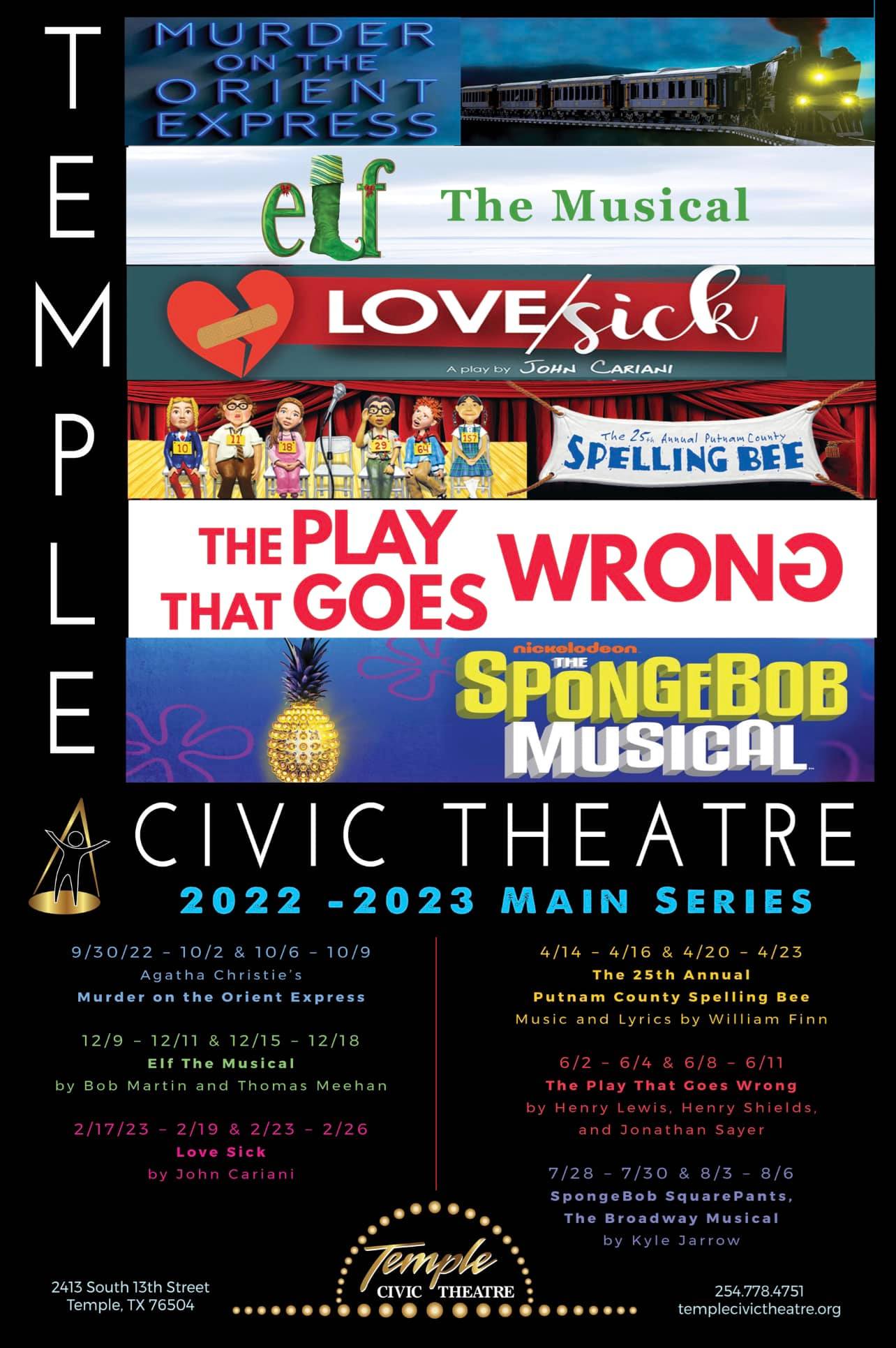 Agatha Christie's Murder on the Orient Express: Sept. 30-Oct. 2 and Oct. 6-9 —Famed Belgian detective Hercule Poirot is travelling on the Orient Express in 1934 when a murder is committed. The victim was a particularly obnoxious man with a criminal past. As clues are revealed, it is apparent that many of the other passengers on the train had a motive to kill him, making Poirot's task of identifying the murderer much more difficult.

Elf, the Musical: Dec. 9-11 and Dec. 15-18, 2022 —Elf the Musical is the hilarious tale of Buddy, a young orphan child who mistakenly crawls into Santa’s bag of gifts and is transported back to the North Pole. Unaware that he is actually human, Buddy’s enormous size and poor toy-making abilities cause him to face the truth. With Santa’s permission, Buddy embarks on a journey to New York City to find his birth father, discover his true identity, and help New York remember the true meaning of Christmas. This modern day Christmas classic is sure to make everyone embrace their inner Elf.

Love/Sick: Feb. 17-19 and Feb. 23-26, 2023 — A darker cousin to Almost, Maine, John Cariani’s LOVE/SICK is a collection of nine slightly twisted and completely hilarious short plays. Set on a Friday night in an alternate suburban reality, this 80-minute romp explores the pain and the joy that comes with being in love. Full of imperfect lovers and dreamers, LOVE/SICK is an unromantic comedy for the romantic in everyone.

The 25th Annual Putnam County Spelling Bee: April 14-16 and April 20-23, 2023— An eclectic group of sixth-graders arrives at the 25th Annual Putnam County Spelling Bee, each eager to win for very different reasons. Sweet and shy Olive brings only her best friend (the dictionary) with her to the bee; bold and hyperallergic speller William Barfee uses his “magic foot” to propel him to greatness; former champion Chip is struggling with his burgeoning puberty; easily distracted Leaf is unconvinced that he’s smart enough to be a challenger; overachiever Marcy is disappointed by her consistent success; and politically aware Logainne Schwartzandgrubenierre only wants to impress her gay dads. In hilarious, touching, and catchy songs, each speller reveals his/her hopes, struggles, and passions as they make their way through the competition. With an engaging, tuneful score by William Finn and a sweet, funny book by Rachel Sheinkin, The 25th Annual Putnam County Spelling Bee causes audiences to fall in love, both with the show itself and its “perspicacious,” “jocular,” and “effervescent” spellers.

The Play that Goes Wrong: June 2-4 and June 8-11, 2023 — The Play That Goes Wrong begins before the curtain has even been raised, as the audience are present while the Cornley Polytechnic Drama Society prepare to stage their new production – the 1920s murder mystery 'Murder at Haversham Manor'. However the set is not yet complete and there is no time to finish it off…..the show must go on!

With a murder (and a moving corpse) established from the beginning, the murder mystery gets into full flow. However, the props start to disappear, actors go missing and the set begins to collapse around, and often on, the cast. Mayhem ensues, the acting gets worse, and the set becomes increasingly dangerous, but the company struggle on regardless. The question is whether any of the cast and crew will remain standing, or conscious, by the final curtain?!

The Spongebob Musical: July 28-30 and Aug. 3-6, 2023 — The stakes are higher than ever in this dynamic stage musical, as SpongeBob and all of Bikini Bottom face the total annihilation of their undersea world. Chaos erupts. Lives hang in the balance. And just when all hope seems lost, a most unexpected hero rises up and takes center stage. The power of optimism really can save the world!

The SpongeBob Musical is based on the beloved animated series created by Stephen Hillenburg and features a book by Kyle Jarrow, with original songs by Yolanda Adams, Steven Tyler and Joe Perry of Aerosmith, Sara Bareilles, Jonathan Coulton, Alexander Ebert of Edward Sharpe & The Magnetic Zeros, The Flaming Lips, Lady A, Cyndi Lauper, John Legend, Panic! At the Disco, Plain White T’s, They Might Be Giants and T.I., and songs by David Bowie, Tom Kenny and Andy Paley

The Legend of Sleepy Hollow: Oct. 14-16, 2022 — In a small town named Sleepy Hollow, a gangly schoolteacher named Icabod Crane comes to town. Despite his unattractive appearance, he quickly proves to be a ladies man who charms the local beauty, much to the local tough, Brom Bones', displeasure. A subtle rivalry erupts, only to have Crane continually gaining the upper hand. The situation changes when Brom learns of Crane's superstitions and exploits them as he musically tells the legend of the fearsome Headless Horseman to frighten the teacher. That night, Crane's lonely night ride home becomes more lively than he ever imagined as the Horseman appears to chase him.

Disney's Madagascar Jr: Feb. 3-5 and Feb. 9-12, 2023 — Join Alex the Lion, Marty the Zebra, Melman the Giraffe, Gloria the hip hip Hippo and, of course, those hilarious, plotting penguins as they bound onto your stage in the musical adventure of a lifetime. Based on the smash DreamWorks animated motion picture, Madagascar - A Musical Adventure Jr., follows all of your favorite crack-a-lackin' friends as they escape from their home in New York's Central Park Zoo and find themselves on an unexpected journey to the madcap world of King Julien's Madagascar.

Alex the lion is the king of the urban jungle, the main attraction at New York's Central Park Zoo. He and his best friends - Marty the zebra, Melman the giraffe and Gloria the hippo - have spent their whole lives in blissful captivity before an admiring public and with regular meals provided for them. Not content to leave well enough alone, Marty lets his curiosity get the better of him and makes his escape - with the help of some prodigious penguins - to explore the world.

Seussical KIDS: March 17-18, 2023 — A musical perfect for the whole family, Seussical JR (performed by ages 4 to 18) takes us into the world of Dr. Seuss, where we revisit beloved characters including The Cat in the Hat, Horton the Elephant, Gertrude McFuzz, Lazy Mayzie, and JoJo. The Cat in the Hat guides us into The Jungle of Nool where we see Horton, the kind-hearted elephant who discovers a speck of dust containing Whoville. He meets JoJo, a Who child reprimanded for thinking too many “thinks.” Horton decides he must protect the speck of dust on a nearby clover, while at the same time protecting an abandoned egg left to his care by the lazy Mayzie la Bird. Horton tries to convince the other animals in The Jungle of the existence of the Whos, but he is ridiculed and put on trial for insanity. Only his loyal neighbor, Gertrude McFuzz, never loses faith in him and eventually, the two fall in love. Seussical JR weaves a story of friendship, loyalty, and love. Despite all odds, Horton and Gertrude band together to save the Whos, free Horton, and restore peace and unity to the Jungle of Nool. Seussical JR teaches us the power of being unique, and the importance of fighting for your beliefs.

Disney's The Little Mermaid Jr: Aug. 18-20, 2023 — Beautiful mermaid Ariel should be a happy girl -- she lives in an enchanted undersea country, her father is a King, and she has the most beautiful singing voice. But she is a passionate, headstrong teenager, and wants what she cannot have -- to live on land. When she falls in love with a handsome human prince, Ariel is more determined than ever to gain a pair of legs. But her only option is to defy her furious father, and bargain with Ursula the Sea Witch, giving her voice as the price of entry onto dry land. With the help of Flounder the fish, Scuttle the seagull, and officious court composer Sebastian the crab, Ariel must wordlessly gain Prince Eric's love within three days -- or lose her soul to the ambitious witch! Based on the classic Hans Christian Andersen fairy tale, and the wildly popular Disney film, this musical staging of The Little Mermaid features a funny and fanciful book by Doug Wright, with the beloved score by Alan Menken, Howard Ashman, and Glenn Slater in an expanded but completely faithful form, featuring the rambunctious and persuasive “Under the Sea,” the romantic expectation of “Kiss the Girl,” and that anthem to longing and belonging, “Part of Your World.”

Tickets for the upcoming season are on sale now to TCT members. Contact Martha Satterwhite, office manager, at (254) 778-4751. All season tickets go on sale in September.