KXAN Interviews Vortex's Melissa Vogt and Others about Prospects for Resuming Live Performance,

Live music, concerts and performances can once again be held in person since Texas effectively went back to normal this week, as business capacity limits put in place to slow the spread of COVID-19 ended statewide. However, the surviving venues in Austin are choosing to move forward cautiously a year after the pandemic began.

Vogt works as the managing director for The VORTEX Theatre in east Austin. She said the arrival of the COVID-19 pandemic forced the theatre to outright cancel at least 10 live shows, creating a cascading effect on future scheduling for its seasons.

“In the very beginning, there was a period of grieving,” Vogt explained. “People were grieving the fact that they were about to open a production, or maybe they were even in the first week of their show. All of a sudden the rug was just pulled out from under them, so we did take time to just pause and go, ‘Wow, this is really horrible.’ Then there was this moment of, okay, so now what?”

Just like everyone else, Vogt said The VORTEX went virtual and ended up hosting about 100 online performances throughout the pandemic, which are still viewable on the theatre’s YouTube page.

“People are getting vaccinated. Folks are wearing masks and doing the things that they’ve got to do to take care of themselves and their neighbors, so we’re starting to make plans to really move forward,” Vogt said. “We’re thinking that maybe even later this summer, we might be doing some outdoor theatre. We do have something on the books for June outside.”

Without the ability to hold any live shows this past year, The VORTEX received virtually no income from ticket sales, which Vogt calls “absolutely devastating.” The theatre is also bracing to receive even less money from city funds.

“The City of Austin funding is based on the hotel occupancy tax, so obviously last year was just like a huge dead zone for tourism,” Vogt explained. “That has a ripple effect that we’ll probably feel even five years down the lines. It’s going to take a long time to recover from this past devastating year.”

The artists, actors and designers employed by The VORTEX crave to put on live shows and have crowds again, as do local music venue operators.

“I dream about shows at night,” Cody Cowan said with a laugh. “They begin with the joy of those intimate live music experiences where you’re just totally connected, and you’re able to see all of your friends and family. They end with me waking up, because I’m freaked out, because none of us are socially distanced or wearing masks.”

Cowan serves as the executive director of the Red River Cultural District, which is located in eastern downtown Austin between Fourth and 15th Streets. He said a number of the bars, clubs and live music venues shut down permanently during the pandemic.

“We’ve lost about 25 to 30% of the businesses in our association,” he said. “Many people, particularly live music venues, don’t own their property and have had long-term commercial leases that they’ve had debt obligation on ongoing for a year, with zero or little income.”

Some of the businesses that closed included Barracuda, Plush, Scratchouse and the Waller Creek Pub House.

“I know other business areas of town have enjoyed more success during the pandemic in terms of sales and attendance,” Cowan said, “but for better or for worse, that’s not the clientele that tends to visit the district.”

He said he’s now paying close attention to the vaccination rates, because that could allow operations to return to times before the pandemic hit.

“I’m a bit skeptical about reaching that herd immunity this year, but I think that we could reach whatever tolerable level it will be acceptable for the majority to start again putting back on touring shows, putting back on festivals,” Cowan said. “These things are always changing and so far have never been closer to us. Fingers crossed we’ll see proper management of vaccinations, and Texas can maybe turn the game around — if you’re a UT fan, turn the game around, and we can see a surprise winning.”

At the Paramount Theatre on Congress Avenue, the pandemic forced it to have pay cuts, furloughs and layoffs, but performances are ramping up again.

“We were able to do 50 live shows between September and December with all the protocols in place,” Jim Ritts, the theatre’s president and CEO, said.

“What I will to say to you is we’re looking to a much brighter future here over the next three to six months,” he added, “but there are so many other venues and other people that have it so much worse than we do that to say we’re not doing well would be unfair to able to have at least 50 performances in the past few months.”

The Paramount will keep operating at about a third of its capacity and still require masks for patrons, which are just some of the extensive safety protocols remaining in place.

“We did take temperatures of everybody, as they walked in. We divided our theatre into an upstairs-downstairs as it exists, but we created two entrances so that even though you might have 375 people in the theatre, we only had 175 down and 175 upstairs, and they were never crossing over one another,” Ritts explained. “We went to touchless ticketing. We went to touchless concessions. We gave people time periods to ask them to arrive so that we didn’t have a lot of people milling around either before or after the show.”

He even said the Paramount could do its own contact tracing if a guest or an employee tested positive for COVID-19.

“We converted entirely to reserved seats so that should there have been somebody come in and tested positive a couple days later, we would be able to know where they were seated and then be able to, within an area around them, notify everybody because everybody was in a reserved seat,” Ritts said. “We knew how to get ahold of them, and fortunately we never had to do that.”

Based on how successful the safety precautions have been and how receptive guests have been to those, Ritts said he could foresee crowds gathering, perhaps still wearing masks, in larger numbers for shows. The Paramount currently has a full-capacity show marked on its calendar now for October.

“We’ve been here for 105 years,” Ritts said. “Let’s make sure that the decisions we make are in the best long-term interests of all of the factions of the artists, of the patrons, of our staff, of our theatre, of our community. That will continue to be the governing principles that guide us.” 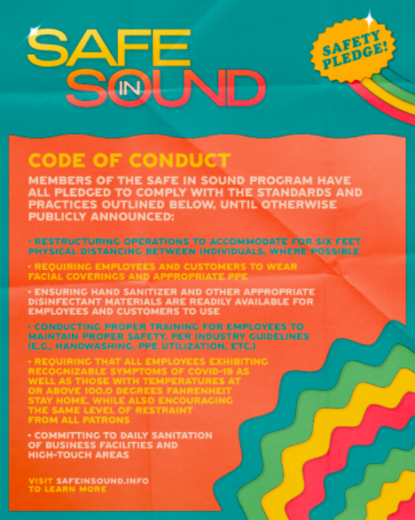 A new safety initiative launched Wednesday in Austin in response to the mask mandate ending.

The Red River Cultural District and about 30 venues, including the Paramount Theatre, announced a new program called “Safe in Sound.” These businesses pledged to abide by their own code of conduct to operate responsibly and safely during the ongoing pandemic despite the state relaxing restrictions.

They said they’ll keep up safety practices, like requiring customers and employees to wear masks as well as enforcing social distancing and sanitization.