BEHIND THE SCENES: THE ART OF THE HOLLYWOOD BACKDROP

The vast Bass Concert Hall Stage turns gallery as Texas Performing Arts presents Behind the Scenes: The Art of the Hollywood Backdrop. Visit mid-century Hollywood without leaving Austin through an up-close view of these Metro-Goldwyn-Mayer studio assets from February 11 through March 21. This first-ever public viewing of twelve historic Golden Age of film backdrops provides a look into the nearly lost art of hand-painted Hollywood motion picture scenic art. Reservations for timed admission tickets are available beginning Saturday, January 30 at 10 am at texasperformingarts.org. 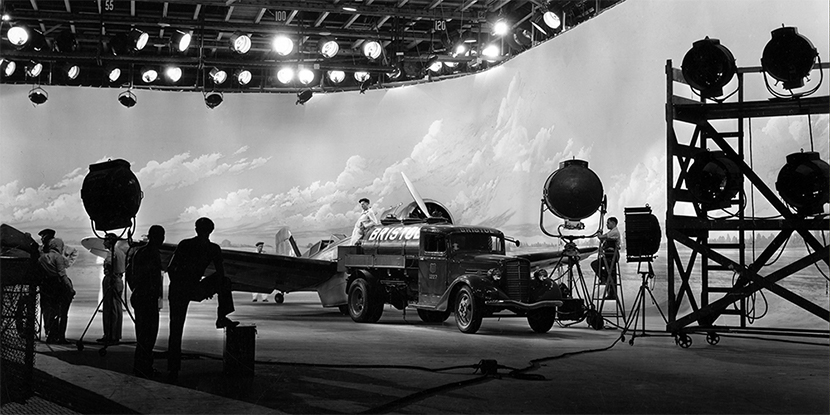 In 2012, the Art Director’s Guild (ADG) Archives began the Backdrop Recovery Project, an effort to preserve the legacy of Hollywood’s motion picture scenic artists. This resulted in the preservation of 207 historic backings, creating the world’s most comprehensive archive of Hollywood scenic art history. ADG donated these historic drops to museums, motion picture archives, and academic institutions, including The University of Texas at Austin through the Texas Performing Arts scenic studio. Texas Performing Arts now houses 50 MGM backdrops used to educate the next generation of scenic artists for stage and screen.

The Texas Performing Arts collection from the Backdrop Recovery Project has been featured on CBS Sunday Morning, in the Los Angeles Times, and in O, The Oprah Magazine. Other backdrops from the Texas Performing Arts collection are currently on view in San Antonio in partnership with the McNay Art Museum for their exhibition Hollywood’s Sistine Chapel: Sacred Sets for Stage & Screen.

Curated by Karen L. Maness, Scenic Art Supervisor at Texas Performing Arts and faculty member in Theater & Dance and Arts & Entertainment Technologies at The University of Texas at Austin, Behind the Scenes: The Art of the Hollywood Backdrop displays highlights of this collection to the public for the first time. "UT Austin now owns the largest educational collection of Hollywood Motion Picture backdrops in the world. Maness explained. “Created in the guarded secrecy of MGM's studio system and designed to transport audiences to far off locations while filming on soundstages in Culver City, these backdrops have never been accessible for public viewing. Discover the "Below the Line" artists who shaped cinematic history. These are the masterworks of artists who painted for films like The Wizard of Oz (MGM 1939), An American in Paris (MGM 1951), Singin' in The Rain (MGM 1952), and North by Northwest (MGM 1959).  You’ll be astonished by these monumental illusions."

While large-scale indoor performances remain suspended due to the pandemic, the Bass Concert Hall stage has been transformed in to an exhibition hall, offering viewers a unique opportunity to see these enormous historic paintings up close. The MGM backdrops on view are:

BEHIND THE SCENES: THE ART OF THE HOLLYWOOD BACKDROP

The exhibit also includes recreations of other backdrops in the collection that were painted by UT Austin scenic art students training with Professor Maness in the Texas Performing Arts studios. “Astounding in scale and technical virtuosity, this collection allows our students to step into the hidden world of Hollywood's Golden Age and learn directly from masters of motion picture scenic art.” Maness stated. “These MGM backdrops hold the key to every discipline required to succeed in the art of scenic painting.”

Bob Bursey, Executive Director of Texas Performing Arts noted “This exhibition continues our commitment to offering new creative experiences during the pandemic. This show is an opportunity for a change of scene—something I think we could all use right now.”

For those unable to visit in-person, a video tour of the exhibition led by Karen Maness will be available on-demand beginning in mid-February.  An accompanying study guide for use by educators will also be available, thanks to H-E-B.

The exhibit is open by reservation for one-hour long visits on Thursdays through Sundays from February 11 to March 21, 2021, as well as on President’s Day, February 15, 2021. Timed slots are available at 2:30 and 4:00 pm on Thursdays and Fridays and at 10:00 am, 11:30 am, 2:00 pm, and 3:30 pm on weekends and President’s Day. The number of visitors per one-hour timed entry slot is strictly limited. Advance reservations are required and may be made at texasperformingarts.org.

Tickets are $12 for adults and $5 for non-University of Texas at Austin students of any age. Tickets are free for UT students, faculty and staff, healthcare professionals, essential workers, and military.

To keep our community safe, Texas Performing Arts ask that:

ABOUT THE BACKDROP RECOVERY PROJECT AND KAREN MANESS

In 2012, the Art Directors Guild (ADG) Archives began to chronicle the unsung contributions of Hollywood’s motion picture scenic artists. Working closely with the ADG, University of Texas at Austin faculty members Karen Maness and Richard Isackes co-authored The Art of the Hollywood Backdrop, published by Regan Arts (2016). The award-winning volume is the definitive behind-the-scenes history of one of Hollywood’s most closely guarded cinematic secrets—painted backdrops and the scenic artists who brought them to the big screen. In 2017 the ADG Archives Backdrop Recovery Project was launched in partnership with J.C. Backings. This commitment resulted in rescuing 207 historic backings from destruction and creating the world's most comprehensive archive of Hollywood scenic art history.

Karen Maness is the principal instructor of scenic art and figurative painting for the Department of Theatre & Dance at The University of Texas at Austin and Scenic Art Supervisor at Texas Performing Arts. Maness studied studio art and set design at Whittier College. She continued her studies at Cobalt Studios in White Lake, New York, and The Florence Academy of Art in Italy. Her career as a scenic artist and practicing studio artist spans thirty years, with works held in private collections worldwide.

Texas Performing Arts is the performing arts presenting program of The University of Texas at Austin and operates campus venues including Bass Concert Hall and McCullough Theatre.  It is the home of the Lexus Broadway in Austin series. In calendar year 2019 Bass Concert Hall had the highest number of tickets sold of any theater in Austin, was #2 in the State of Texas and #22 in the world, according to industry publication Pollstar. Following a national search, Tony Award-winning producer Bob Bursey was appointed Executive Director in January, 2020.