Annie Burridge extends her contract as General Director & CEO to 2026

setting a course for supporting the company’s bright future

Austin Opera General Director & CEO Annie Burridge today announces the appointment of Timothy Myers, the company’s current Artistic Advisor, as the newest member of its artistic leadership team. Supported by a $2.5-million endowment fund created by longtime patrons Sarah and Ernest Butler, Myers will be the Sarah and Ernest Butler Principal Conductor & Artistic Advisor. In addition, Burridge announces an extension of her current contract as General Director & CEO through 2026 and launches the Austin Opera Forward campaign, a new fundraising initiative to power the company into the future. The first phase of the campaign has already raised $2-million towards a goal of $3-million. 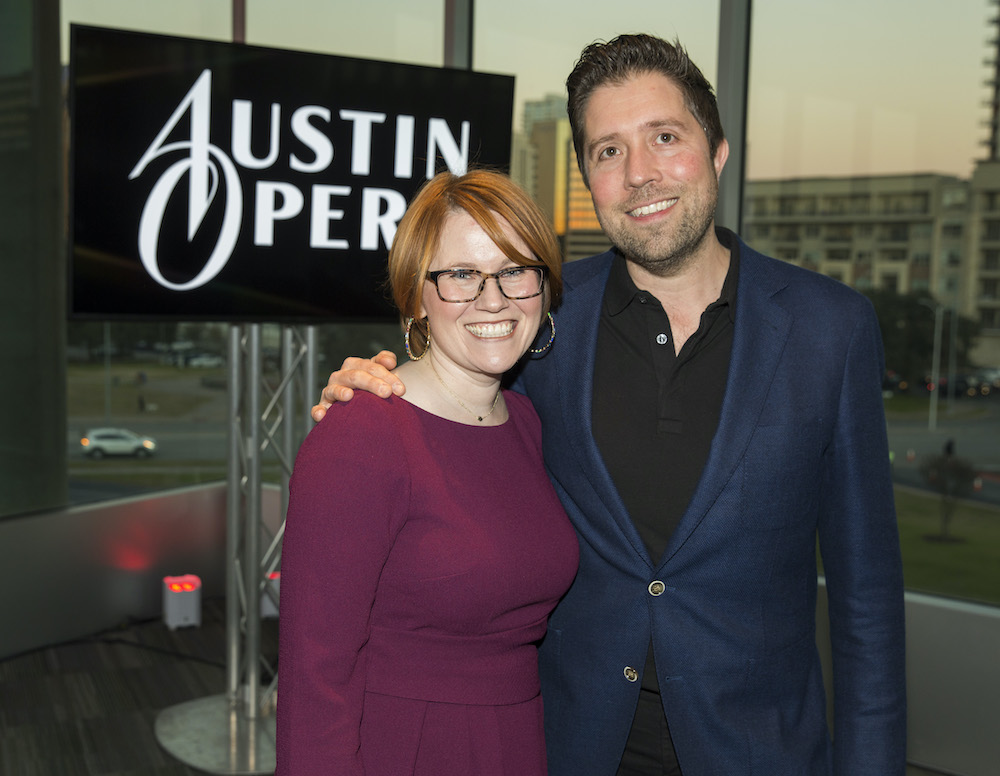 Timothy Myers joins Austin Opera as the Sarah and Ernest Butler Principal Conductor & Artistic Advisor effective immediately, for a three-year term through 2023. Reporting to the General Director & CEO, Myers will conduct a majority of Austin Opera productions each season, lead and develop the Austin Opera Orchestra and Chorus, and partner with Burridge and Senior Director of Artistic Operations Nathan DePoint in season planning and casting, ensuring excellence in all facets of the company’s artistic programming.

Serving as Artistic Advisor since 2018, Myers has worked with Burridge and DePoint to establish new co-production partnerships, expand the company’s offerings to include numerous new and contemporary works, and curate the company’s continuing-education and community events. Myers made his Austin Opera debut conducting Silent Night in 2019.

“Timothy is an extraordinary musician, collaborator, and strategist, and we are thrilled to expand his role at Austin Opera,” says Burridge. “He has been an integral part of our growth and success over the past two years, providing vital connections to the field and guiding our artistic excellence to new levels. He is an outstanding colleague and has already established strong working relationships with the Austin Opera Orchestra, Trustees, and staff.”

Myers’s other recent conducting successes include Massenet’s Don Quichotte for his third appearance at the Wexford Festival in Ireland, his debut with Santa Fe Opera leading Bizet’s The Pearl Fishers, and the world premiere of Joel Puckett and Eric Simonson’s The Fix for his debut at Minnesota Opera. He also conducted the recent hit production of Bernstein’s West Side Story at Houston Grand Opera.

An experienced collaborator in the creation of new works, Myers has conducted world premieres at Houston Grand Opera, Washington National Opera, Fort Worth Opera, and Opera Africa. For seven seasons, he served as Artistic and Music Director of North Carolina Opera, where his work inspired a precipitous rise in the performance standard and the forging of collaborations with many local and national organizations. A protégé of renowned conductor Lorin Maazel, he was the first associate conductor of the Castleton Festival, where he led multiple symphonic and opera performances over his tenure.

“For the past two years, it has been tremendously rewarding to serve Annie and the entire Austin Opera community as their Artistic Advisor, and I am elated to expand our collaboration to include the duties of Principal Conductor,” says Myers. “I believe greatly in the future of Austin Opera, and especially look forward to deepening my relationship with the wonderful Austin Opera Orchestra and Chorus.”

Through a series of generous contributions, longtime Austin Opera donors Sarah and Ernest Butler have endowed the company’s position of Principal Conductor & Artistic Advisor in perpetuity. “We could not be more pleased to support Timothy Myers as Austin Opera’s Principal Conductor. Together, Annie and Tim bring a fresh and exciting artistic vision to the company that is a perfect match for our city,” say the Butlers. “We have been very impressed with the high level of artistic quality we have experienced since Tim’s involvement and are excited for what is to come under this dynamic duo’s leadership.”

Burridge also today unveils the Austin Opera Forward campaign. The campaign comes at a critical time as Austin Opera continues to expand its programming with bold new initiatives in response to the pandemic, and will support investments in three key areas of the company’s future: elevating artistic excellence; innovation in audience-building strategies and producing models; and expanded community impact through radical collaboration—a reflection of the company’s belief that partnership is the most critical tool in building a vibrant and sustainable cultural ecosystem.

The first phase of the campaign seeks to raise $3-million in major gifts. To date, $2-million in commitments have been secured, with leadership support from Trustee Eva Womack and Marvin Womack, Development Chair Polly Barbaro, Sarah and Ernest Butler, Board President Mike Erspamer and Patty Erspamer, Trustee Elisabeth Waltz and Steffen Waltz, Board Chair Jeff Kodosky and Gail Kodosky, and Board Chair-Elect Susanne Tetzlaff and Dr. Eric Tiblier.

These initial leadership investments have placed the company in a strong financial position, and after three years of intensive planning and capacity building, the company is well-positioned to continue to make smart financial and leadership decisions to ensure Austin Opera’s continued growth and sustainability.

“Over the past three years, we have amassed the leadership—both volunteer and professional—to guide Austin Opera to entirely new levels of excellence, relevance, and community impact,” says Board Chair Jeff Kodosky. “Though the pandemic has had a significant impact on the arts, Annie and her team have leveraged industry contacts and used ingenuity to keep the community and our key stakeholders engaged by creating new digital and live programming options. The Austin Opera Forward campaign is a critical step in maintaining the company’s recent upward trajectory and ability to flourish post-pandemic.”

Trustee Paula Damore and Stuart Damore, Trustee Andrew Heller and Mary Ann Heller, and Trustee Ken Smith and Paula Smith have also contributed to the campaign. “I continue to be inspired by the generosity of our supporters,” adds Chief Development Officer Jennifer Basten. “To be able to announce this level of support at this particular time is a testament to our opera family’s enthusiasm, commitment, and confidence in the vision of Austin Opera.”

Annie Burridge renews her contract through 2026

General Director & CEO Annie Burridge has also renewed her contract, creating a continuity of leadership through 2026. Since beginning at Austin Opera in 2016, Burridge has celebrated many management milestones with the company. She spearheaded the development and implementation of the company’s new strategic plan, created new policies on sexual harassment, and established dozens of new community partnerships. She was elected Vice Chair of national service organization OPERA America and appointed a Nonprofit Fellow at the Aspen Institute, establishing important connections between Austin Opera and the field.

As Austin Opera’s top artistic and business leader, her successes include the launch of Opera ATX, the company’s adventurous new artistic series that amplifies its Long Center programming with groundbreaking productions in alternative venues throughout the city; the company’s new partnership with the Butler School of Music on the Butler Opera International Competition;  the selection of Timothy Myers as the new Sarah and Ernest Butler Principal Conductor & Artistic Advisor; and the company’s successful pivot during the pandemic to a new lineup of digital performances, from the Live from Indy Terrace recital series to the forthcoming Sarah and Ernest Butler Performance Series, co-produced with Houston Grand Opera, which will be presented online and in-person through an innovative partnership with the Blue Starlite Drive-In movie theater.

Burridge’s successes in fundraising include multiple million-dollar major gifts, a 100% increase in the value of the endowment over the past three seasons, the recruitment of five new board members, multiple Innovation Grants from OPERA America, an innovation grant from the prestigious Bloomberg Philanthropies, and record-breaking fundraising totals at Serenata, the company’s annual fundraising dinner and auction.

“I’m honored to continue my work with the dedicated and generous Trustees of Austin Opera. Their excellent stewardship over the past three decades has strongly positioned us to imagine an ambitious future,” says Burridge. “I’m also thrilled to continue my work with the talented, committed, and courageous team of arts administrators who make up the Austin Opera staff. It is a joy to work alongside so many passionate colleagues to serve this inspiring city.”

Austin Opera’s 2021 season at the Long Center for the Performing Arts includes An All-Star Concert, conducted by Timothy Myers, January 30 and 31; Puccini’s Tosca, conducted by Timothy Myers and directed by David Lefkowich, April 24–May 2; and Mozart’s The Marriage of Figaro, directed by E. Loren Meeker, November 6–14. More information is at austinopera.org or 512-472-5992.

In addition, thanks to a $1-million leadership gift from Austin philanthropists and longtime patrons Sarah and Ernest Butler, Austin Opera will partner with Houston Grand Opera to co-produce and present a diverse slate of new digital opera performances beginning this fall: the Sarah and Ernest Butler Performance Series. These new co-productions will be presented online and at the Blue Starlite Drive-In movie theaters in Austin and Round Rock. Live from Indy Terrace, Austin Opera’s innovative digital recital series developed in response to the pandemic, will also continue throughout the rest of 2020 and into 2021. A complete schedule of future performances will be posted soon at austinopera.org.