Texas Performing Arts and Fusebox Festival announce a collaboration to launch a new residency program for Austin-based performing artists. This partnership comes at a time both organizations believe there is vital work to do to ensu

re the performing arts industry has not only a future, but a substainable one.  The ultimate goal is to put resources directly in the hands of Austin artists.

ABOUT THE RESIDENCY PROGRAM

The first of its kind in Austin, the residency program is geared towards adventurous Austin-based artists who are pushing the boundaries of performance and on the cusp of new projects, as well as furthering the values of diversity, equity, and inclusion in the local performing arts community. The program provides four individual artists or ensembles up to $20,000 in project funding for technical support and artist fees, plus access to the theatres, studios and production shops at Texas Performing Arts valued at $30,000, to create a total award of $50,000 each.

The residencies are designed to be flexible to respond to the needs of each participating artist and the project they plan to create. The creative process will be shared with audiences online through interviews and other forms of digital documentation. Texas Performing Arts and Fusebox will continue to support the projects in the next stages of their development leading to their premieres.

“In this difficult time for live performance, it’s essential that we make radical investments in new work rather than retrench,” said Texas Performing Arts Executive Director Bob Bursey. “Without a typical schedule of performances, it’s the perfect moment for us to repurpose our stages as laboratories for Austin artists who have been so hard hit by the pandemic. When we are able to gather together again, we want to ensure there will be compelling new performances to see.”

Fusebox Artistic Directors Ron Berry and Anna Gallagher-Ross, stated “This unprecedented moment has asked us to rethink our relationship to time and the allocation of institutional resources. We want to provide time and space for diverse artists to create and invent on their own terms, rather than focusing on an immediate product or outcome, and we believe the financial burden of this creation process should not fall entirely on the artists.”

After evaluating and learning from the pilot year, the intention for the program is to become an annual opportunity for the Austin performing arts community, with the 2021-2022 program involving an Austin-area call for submissions, with participants selected by an invited committee of Austin artists and arts leaders. 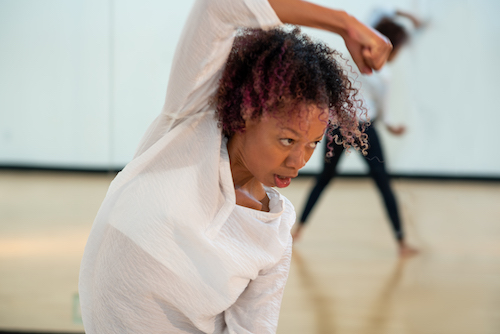 Project: “Yes, And” is a performance project that recenters Black womanhood as the norm and operating force in the creative process. “Yes, And” asks: Who would you be and what would you do if, as a Black woman, you had nothing to worry about? What would you create and how might you be in community with others? Manifesting as virtual and live public engagement “chapters” that are unique and remixed to each location and their communities, “Yes, And” is a process, or rather a methodology, of undoing and of freedom, the freedom “to find” and to “be found” from this recalibrated place.

Short Bio: Gesel Mason is Artistic Director for Gesel Mason Performance Projects and Associate Professor of Dance at University of Texas at Austin. She was a member of Liz Lerman Dance Exchange and Ralph Lemon/Cross Performance Projects. Mason utilizes dance, theater, humor, and storytelling to bring visibility to voices unheard, situations neglected, or perspectives considered taboo. Recently featured on NPR and Google Arts and Culture, and over 15 years in the making, Mason’s solo project, NO BOUNDARIES: Dancing the Visions of Contemporary Black Choreographers, is evolving into a digital humanities archive to illuminate the unique legacies and aesthetics of Black choreographers. www.geselmason.com 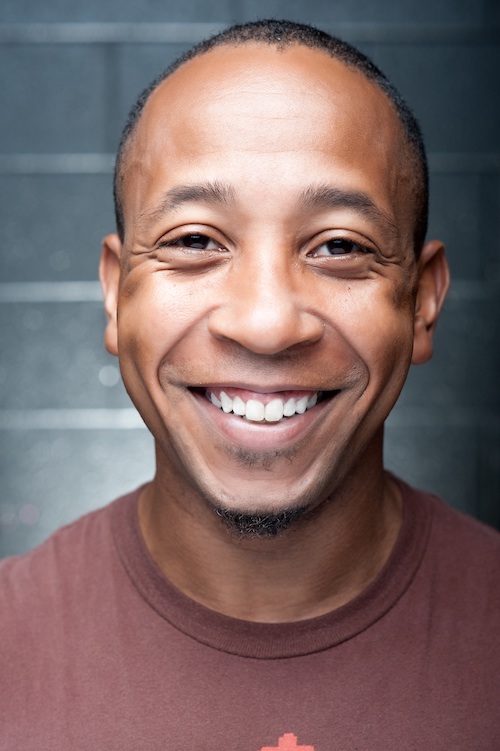 Project: Due to the impact of Covid-19, the anticipated world premiere and live tour of (Re)current Unrest—which previewed as part of Fusebox 2018—has been converted into a dance film project which will tour virtually. Inspired by James Baldwin's The Fire Next Time, Ta-nehisi Coates' Between The World And Me, and current and historical Black protest movements, (Re)current Unrest is an evening-length, immersive, performance installation “ritual.” The work reflects the state of unrest caused by Black America's social condition amidst the pursuit of the American Dream.  Anderson's signature Afro-contemporary choreographic voice explores the resultant condition of unease and discomfort produced by this inescapable level of social awareness—We stay woke.

(Re)current Unrest receives major additional support from the Department of Theater and Dance at the University of Texas at Austin. The virtual tour of (Re)current Unrest is made possible by the New England Foundation for the Arts' National Dance Project, with lead funding from the Doris Duke Charitable Foundation and The Andrew W. Mellon Foundation.

Short Bio: Charles O. Anderson, a native of Richmond, Virginia, is head of the University of Texas at Austin’s dance program and artistic director of dance theatre X, the critically acclaimed afro-contemporary dance-theatre company. Anderson received his BA from Cornell University and his MFA in Dance from Temple University. Among his achievements in afro-contemporary choreography and dance theatre, Anderson was selected as one of “The 25 Artists to Watch” by Dance Magazine and is a Pew Fellowship in the Arts recipient. Anderson also serves on the faculty of the American Dance Festival. www.charlesoanderson.me 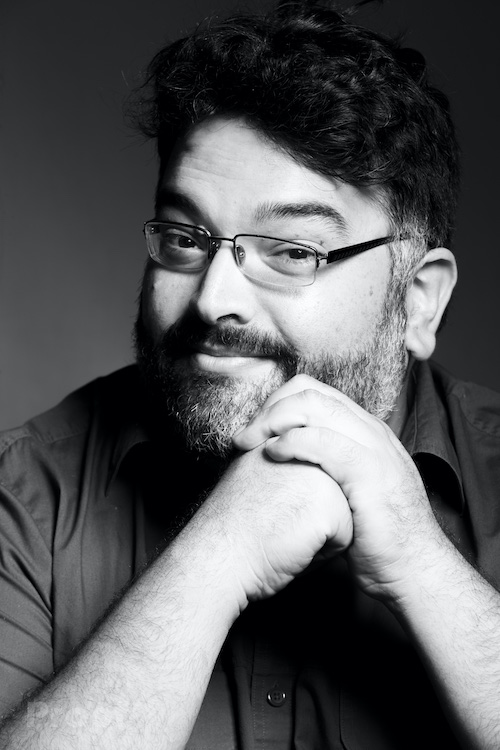 Federico Garcia Lorca was a queer Spaniard who survived a pandemic but lost his life to fascism. Director Rudy Ramirez and writers Victor Cazares (American (tele)Visions), Krysta Gonzales (Más Cara) and Jesus Valles ((Un)Documents) are four queer Mexicans hoping to do him one better. With that in mind, they're exploding his iconic "Rural Trilogy" into three comedies that revel in our tragedies, contradictions and survival.

Short Bio: Rudy Ramirez (they/them) is a director, writer, performer and teaching artist specializing in the development of new work. They are an Associate Artistic Director of The VORTEX Theatre and the founding artistic director of Avante Theatre Project, a company dedicated to producing new and avant-garde Latinx performance. They have worked with numerous theatre companies in Austin and around the country, have won 6 B. Iden Payne Awards and an Austin Critics Table Award as a director, and were named Best Director in the Austin Chronicle Readers’ Poll in 2017. www.rudyramirez.net

Project: In our wild and experimental way, our goal is to merge the entertainment mediums through a virtual series of interactions combining live gaming, television, and theatre. Through an internet user interface, the audience will have the opportunity to influence both the environment and the live performers. Three environments— an arctic tundra, an alternate universe bounce house inhabited by jiggle pets, and a post-apocalyptic parkour obstacle course—share walls and leak their characters into one another. Several cameras reveal up close and omniscient perspectives dictated by the viewer and their manipulative choices.  Amidst these unpredictable times, Frank Wo/Men’s project is physically virtuosic, dramaturgically detailed, and shockingly interactive. 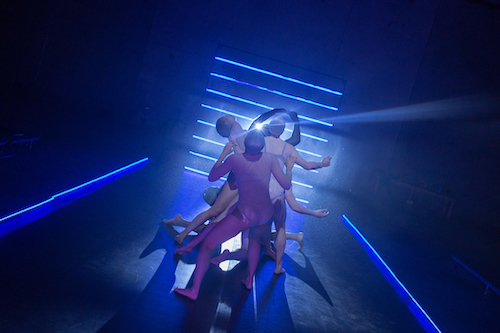 Texas Performing Arts is the performing arts presenting program of The University of Texas at Austin and operates campus venues including Bass Concert Hall and McCullough Theatre.  It is the home of the Lexus Broadway in Austin series. In calendar year 2019 Bass Concert Hall had the highest number of tickets sold of any theater in Austin, was #2 in the State of Texas and #22 in the world, according to industry publication Pollstar. Following a national search, Tony Award-winning producer Bob Bursey was appointed Executive Director in January, 2020.

Fusebox is a non-profit arts organization in Austin, TX. At the center of our work is an ongoing exploration of live performance. Our programs bring unique artistic projects to thousands of people in Central Texas and beyond; provide support and resources to artists; and address civic issues at the center of contemporary life and culture. Visit us at www.fuseboxfestival.com

A non-profit arts organization, Fusebox Fusebox Festival is supported in part by the Cultural Arts Division of the City of Austin Economic Development Department, the National Endowment for the Arts, Texas Commission on the Arts, among others.