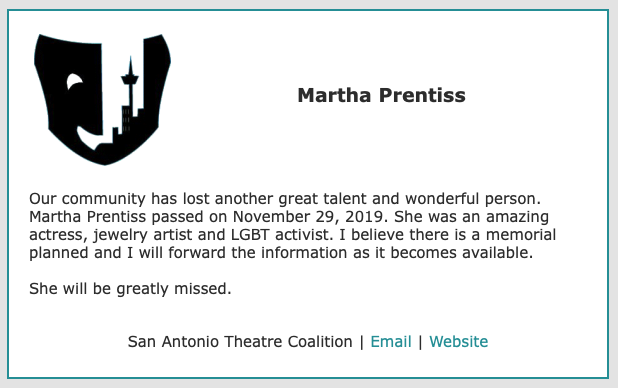 We are deeply saddened that our community has lost another great talent. Martha Prentiss passed on November 29, 2019. Our deepest sympathy o her friends and family. Here is an article about Martha.
——
Martha Prentiss has been a LGBT activist in San Antonio, Texas for decades. Prentiss was a founding member of Las Mujeres, San Antonio's first bookstore dedicated to women. The bookstore, established in 1981, served as a social and educational space offering poetry readings and weekly socials and was one of the first spaces in the community that lesbians could claim as their own. In the mid-1980s, Prentiss along with other lesbians, created WomanSpace which became the longest running women's publication in San Antonio spanning the years of 1986 though 2007.

In tandem with WomanSpace and Las Mujeres, Prentiss created another tool for communication among San Antoio's lesbian community. She established the Lesbian Information San Antonio (LISA) telephone line which served as a source of connectivity and visibility for the city's queer women. In the late 1980s in collaboration with Kay Ford, a prominent member of the local lesbian community, Prentiss launched Tuesday Night Discussions which took place in Ford's bars. Women came to together to discuss topics relevant to their lives and to listen to presentations by speakers.

Prentiss served on the board of several non-profit organizations including the San Antonio Lesbian Gay Assembly (SALGA) and the Esperanza Peace and Justice Center. In 1990 and 1994, she served as co-chair of the Texas Lesbian Conference (TLC) and was active in planning the HRC Black Tie Dinner over the course of several years. Prentiss created the annual Cancer Party, a fundraiser which attracted hundreds and supported several local women's community organizations.

Prentiss, in addition to her service to the LGBT community in San Antonio, was one of the city's most respected and well-known jewelry makers. She provided a safe and supportive space where gay men and women could work in tandem with her to create jewelry that reflected important occasions in their lives. A portion of her profits were donated to community organizations.

Prentiss channeled her talents into the stage as well. She performed in plays in Austin and San Antonio with one of her most celebrated being, "The Last Reading of Charlotte Cushman."