Speaking to Austin's live music roots, ZACH's Topfer lobby has been transformed into an Irish pub, creating an immersive experience from start to finish for the musical ONCE.

With direction by Producing Artistic Director Dave Steakley, Musical Direction by Allen Robertson, Scenic Design by Broadway designer Donald Eastman, music and lyrics by Glen Hansard and Markéta Irglová, and book by Enda Walsh, audiences will fall for this unexpected romance that features a talented ensemble of actor/musicians who play their own instruments on stage.

Based on the 2007 Academy Award®-winning film, Once is an enchanting, modern love story about the complexities of relationships and the power of music to connect us all. Once tells the story of an Irish musician and a Czech immigrant drawn together by their shared love of music. Their unexpected friendship and collaboration evolves into a powerful but complicated romance, heightened by the raw emotion of the songs they create together.  Winner of 8 Tony Awards® including Best Musical, this unique theatrical experience, with breathtaking melodies by Glen Hansard of the Irish band The Frames, will have you falling in love from the very first note.

Age Recommendation: 10 and up for language

Diane Irwin – Assistant to the Director

Run time: Two hours and 40 minutes including one intermission

Special Events in celebration of Once

Bobbi and Mort Topfer are Presenting Sponsors of Once with Annette Renaud as Executive Producer and KMFA as a Supporting Sponsor. 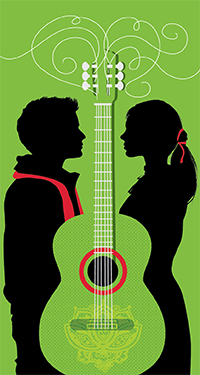