The heartwarming and funny musical Mame is on the Springer Main Stage at Georgetown’s Historic Palace Theatre from February 23rd to March 25th, 2018 (five weekends).  Written by Jerome Lawrence and Robert Edwin Lee with music and lyrics by Jerry Herman, Mame is set in New York during the Great Depression.  The story focuses on the eccentric bohemian, Mame Dennis, whose flamboyant lifestyle is interrupted when her young nephew comes to stay with her, leading to all sorts of misadventures.  Noted Austin actress Michelle Cheney IS Mame in the Palace production!

Mame is based upon the novel by Patrick Dennis (pen name) from 1955 entitled Auntie Mame: An Irreverent Escapade (originally titled My Best Girl).  His novel was one of the bestselling American books of the 20th century.  In chronological vignettes, the narrator — also named Patrick — recalls his adventures growing up under the wing of his madcap aunt, Mame Dennis.

Michelle Cheney – a Palace favorite – has the coveted role of “Mame” in the Palace production.  With plenty of other Palace credits, Jim Lindsay returns as director of Mame.  Choreographer Jesee Smart is currently the manager of the Youth Performance Company.  Rose Yurcina, music director, is an active musical theatre performer and private voice teacher.  Set design for Mame is the product of Michael Davis, a director on the Palace Board and former president of the Board.

The Palace is most appreciative of the generous sponsorship by THE NOVAK BROTHERS for the Palace production of Mame.

Get tickets for Mame – on the Springer Main Stage at Georgetown’s Historic Palace Theatre from February 23rd to March 25th, 2018 (five weekends) – at www.georgetownpalace.com or by calling 512-869-7469.

Group rates are available for 20 or more.  The Palace seats about 295, with reserved seating paid for in the ticket price.  The Palace office in the lobby of the theatre is open Monday through Friday from 10:00 a.m. until 4:00 p.m. (except for some holiday dates).  Purchase tickets and select seating online at www.georgetownpalace.com or by calling512-869-7469.  (Please call ahead regarding special needs seating.)  Visa, Master Card, Discover, and American Express are accepted. 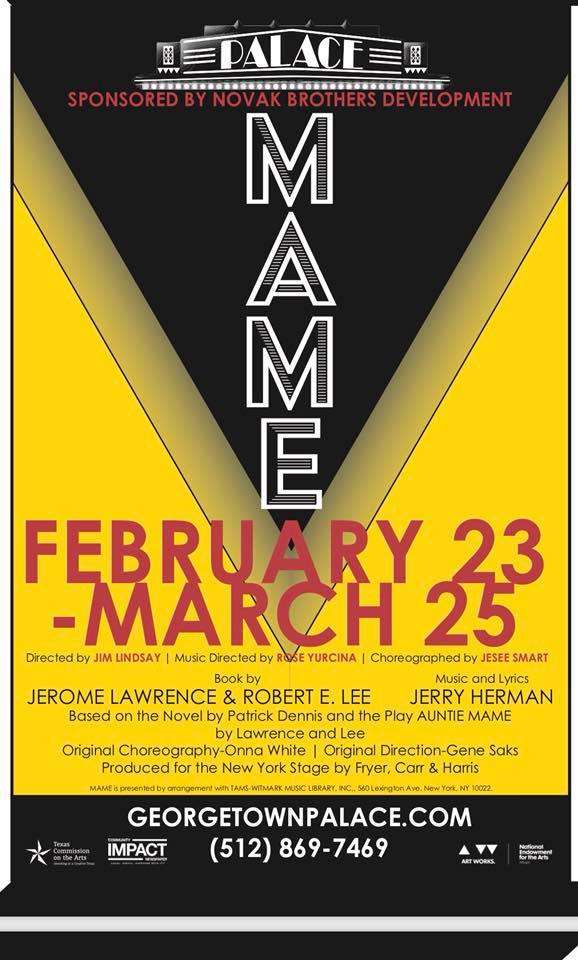