To conclude the 2016-2017 Main Stage Season at The Georgetown Palace Theatre, Yesenia McNett returns to the Palace stage for five weekends of Always, Patsy Cline, written by Ted Swindley.  Show dates are weekends August 18 to September 17.  (The Actor ‘Yesenia McNett’ appears through the courtesy of Actors’ Equity Association, The Union of Professional Actors and Stage Managers in the United States.)  Yesenia McNett has performed the Patsy Cline role in theatres around Texas and California, and for this role has earned an Alamo Theatre Arts Council Globe Award for Outstanding Actress in a Musical.

This musical tribute to the legendary country singer Patsy Cline, who died tragically in 1963 in a plane crash at age 30, is based on a true story about Cline’s friendship with a fan from Houston named Louise Seger who befriended the star in a Texas honky-tonk in l961 and continued a correspondence with Cline until her death.  Once again, Louise Seger is portrayed by the gifted Austin actor Linda Bradshaw.

Always, Patsy Cline features many of Patsy's unforgettable hits – such as Crazy, I Fall to Pieces, Sweet Dreams, and Walking after Midnight – and runs at the Palace for 5 weekends from Friday, August 18, 2017 to Sunday, September 17, 2017.  Suggested Rating PG.

The Palace appreciates the Season Sponsorship of Always, Patsy Cline by Community Impact, whose mission is to build communities of informed citizens and thriving businesses through the collaboration of a passionate team.

Ticket prices for this show – the final show of the 2016-2017 Season – are $30 Adults, $28 Seniors (55+), $28 Students and Active Military, and $14 Children (13 & younger).  *$1 Ticketing Fee will be added per ticket at checkout.  *Student Rush Tickets $17 at the door with student ID.  Group rates are available for 20 or more.  The Palace seats about 295, with reserved seating paid for in the ticket price.  The Palace office in the lobby of the theatre is open Monday through Friday from 10:00 a.m. until 4:00 p.m. (except for some holiday dates).  Purchase tickets and select seating online at www.georgetownpalace.com or by calling 512-869-7469.  (Please call ahead regarding special needs seating.)  Visa, Master Card, Discover and American Express are accepted. 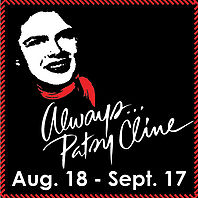