Review: The Red Balloon by Tongue and Groove Theatre

The only real kid in sight, it seems, is the lead -- Gricelda Silva, the bright-eyed young woman playing the bright-eyed boy befriended by the faithful balloon. With her slight figure, fresh face and utter concentration, she is like a sylph, one of Paracelsus' elemental beings of the air.

In 1956 the 34-year-old French filmmaker Albert Lamorisse wrote and filmed the slim, imaginative, 34-minute fantasy The Red Balloon.  His son Pascal played the central role, that of a quiet, lonely schoolboy who discovers a magical red balloon -- one that recognizes him, follows him with the simplicity and loyalty of a pet dog, and provides an escape from the emptiness of barren city life.  Lamorisse's daughter Sabine played the little girl who appears with a similar … 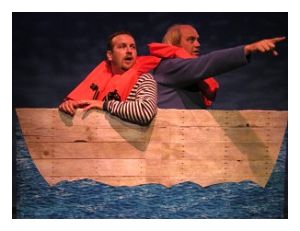 Review: A Life in the Theatre by Tongue and Groove Theatre

There's a duff sentimentality in much of this, and it arises from the cluelessness that Michael Stuart gives to the gradually failing older actor.

With David Mamet's name on the playbill, one expects edgy situations and sharp language, but this production of A Life in the Theatre was one of gentle comedy and smooth edges.  It's a two-man show in which we see two male actors in an unnamed fifth-rate theatrical company sharing a dressing room. Michael Stuart is the mature actor and Zeb West is the newcomer. Mamet gives us vignettes of them over the stretch of a season or …