Crimes of the Heart
by Fredericksburg Theater Company

Crimes of the Heart was the winner of the 1981 Pulitzer Prize and the New York Drama Critics Circle Award. An astonishing first play, initially presented by the Actors Theatre of Louisville, then Off-Broadway, and then on Broadway, where it established the author as a major voice in the theater. Warm-hearted, irreverent, zany and brilliantly imaginative, the play teams humanity and humor as it examines the plight of three young Mississippi sisters betrayed by their passions.

Lenny Magrath 30 years old. The oldest sister of the three Magrath sisters. She is quiet and soft-spoken, but very caring.

Chick Boyle 29 years old. The first cousin of the three Magrath sisters. She is loud and annoying.

Meg Magrath 27 years old. The middle sister of the three Magrath sisters.  She has returned to Mississippi from California, where her singing career has stalled.

Doc Porter 30 years old. Meg's old boyfriend. He has married with children, but still has feelings for Meg.

Babe Botrelle 24 years old. The youngest of the three Magrath sisters. She is in major trouble for shooting her abusive husband in the stomach.

Auditions for FTC's spring production Crimes of the Heart are scheduled Saturday and Sunday, February 7th and 8th, 2:00 pm at the Steve W. Shepherd Theater, located at 1668 S. U.S Highway 87 in Fredericksburg. All roles are available. Auditions will be conducted by cold readings from the script. Scripts for Crimes of the Heart can be checked out at the theater's box office starting Monday, January 26th. The checkout period is 48 hours.

Box-office hours are Monday through Friday, from 9:00 am to 1:00 pm.  If you are cast attendance to technical rehearsals, April 6th-9th, is mandatory, as well as attendance to all performances. 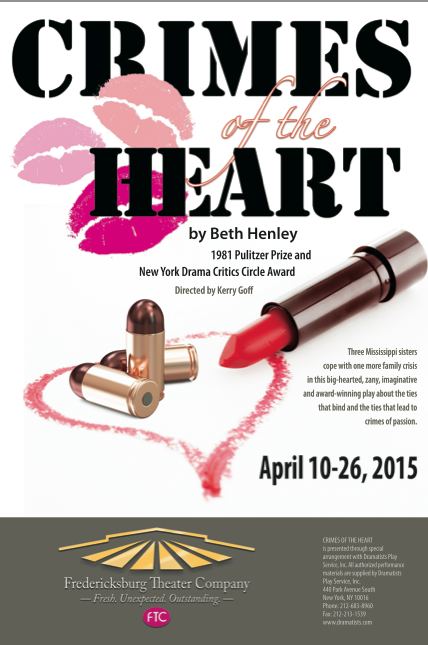