Descriptions are subject to change and clarification. All characters are normal people who live in Buffalo. Unless specifically noted, all body types are welcome! Except for ‘Nathan,’ you must be at least 18 years old to audition; candidates for Nathan must be at least 10.

This show has adult themes and language. We will be making every effort to keep it PG-13. All ages are stage ages.

What the Director is looking for:

This show must have “heart.”

We need actors who have comedic timing and the ability to bring their character to life. The audience must connect with these real people and fall in love with them, quirks and all. Vocal ranges include key solo work. Depending on casting needs, some ranges may be wider or narrower to cover the full harmonies required. This music is more difficult than it first appears. Most of the men sing a variety of styles with considerable range.

The women (except for Jeanette) all sing in a moderate Mezzo/Belt range. All include challenging harmonies while moving or dancing. We are looking for good movers. No dance training or experience in any particular style is required, but many characters need to perform synchronized movement well while singing tight harmonies. Be prepared to dance!

Reminder to women: this show is not just about the guys and their underwear issues! The women’s roles are powerful, pivotal, and memorable with kick-ass songs. There is no heart without connection and the women are critical in creating the circle. There are some non-dancing and non-singing roles, but everyone will sing and dance at auditions.

* = Monty Men If you are auditioning for these 6 roles, or Keno, you need to be very comfortable with your body; enough to perform on stage in your underwear and eventually a G-string. Will we go all the way? Trust is a key word for our production – you will be taken care of respectfully and our final moment will be powerful, yet careful. Wear clothing to auditions that reveals your overall body shape accurately. You will not undress at auditions.

Nathan Lukowski – Jerry’s young son. 12. Range: age appropriate. “12 years old going on forty” but young-looking for his age. Must be at least 10 year’s old by auditions. Nathan can be stoic, sincere, and charming, but ultimately real as he deals with his parents’ custody battle. Key player who does a lot of witnessing. PARENTS: Please watch the original movie and find an opportunity to read the musical’s entire script BEFORE your young man auditions. The movie is Rated R for language and differs from the play in significant ways. The script for the play is available, contact us directly for a perusal. Nathan sees and hears adult-themed content. This role is strictly for a young male performer: no girls auditioning as boys. Boys will use the exact same audition process as adults, includ­ing singing and dancing.

Pam Lukowski – Jerry’s estranged wife, Teddy’s fiancée. 30-40. Range: Alto. Sings in 2 numbers. Broad mezzo with belt. G3-A5. In some ways Pam has become a realist. She earnestly wants Jerry to be an active parent for Nathan, but wrestles with strong reservations about his character and her own lingering feelings for him. “I’m not the enemy!” and she isn’t! Powerfully connected performer required.

Dave Bukatinsky * – An unemployed steel worker. 30-40. Range: Lyric Tenor with strong falsetto. Sings in 9 numbers. B2-Db5 Jerry’s best friend, he is often swept along in Jerry’s plans. He struggles with unemployment and its effect on his marriage. “Heart” is often used to describe this show: Dave has heart in spades! A lovable, good-natured soul with body weight and self-esteem issues. Must be comfortable enough with your belly to proudly wield it in all its glory. Body type = notably overweight relative to the other Monty Men - it is a key component of the character. Strong singer required.

Georgie Bukatinsky – Dave’s wife. 30-40. Range: High alto/broad mezzo belter. Sings in 4 numbers. F3-A5. A warm, down-to-earth soul that isn’t afraid to kick up her heels. Her reality comes in dealing with her hubby’s struggles and trying to hold her marriage together. Powerful songs showcase her singing.

Malcolm MacGregor * – an unemployed mill worker. 25-40. Range: High Tenor, smooth falsetto. Sings in 8 numbers. C#3-E5. His frank self-assess­ment neglects to mention his sweetness and sincerity. A shy man, he is rescued from a half-hearted suicide attempt by Jerry and Dave and becomes fast friends. Through their auditions for male strippers, he meets Ethan who buoys him through a very dark moment. Malcolm’s self-esteem soars around his new companions. Beautiful voice required.

Harold Nichols * – an unemployed mill supervisor. 35-60. Range: High baritone/tenor. Sings in 6+ numbers. F2-Bb4. Harold’s efforts to protect his wife extends to covering up his unemployment for 6 months while keeping her be-decked in upper middle class luxury well past his means. Aloof at first, his dance skills are what finally, and arduously, brings Hot Metal alive.

Vicki Nichols – Harold’s wife. 30-55. Range: High alto/broad mezzo belter. Sings in 4 numbers. G3-A5. Charming and energetic, she loves Prada ensembles but not more than she loves her husband. Flamboyant on the surface, her love and understanding are real. Classy, but easily one of the girls. Comedic triple-threat.

Jeannette Burmeister – the piano player. 50+. Range: Low alto belter. F3-Bb4. She’s seen it all and been there be­fore. You can’t shock her, but she’ll shock you as she says what’s really on her mind! Shows up with a piano to play for the guys totally out of the blue. Steals the show with her ‘Showbiz’ number.

Teddy Slaughter – Pam’s fiancé. 35-55. The opposite of Jerry – clean-cut, well-off. Will double in other roles. He is not one of the “Guys” and will not strip. May sing in the songs ‘Scrap’ and ‘Let It Go.’

Buddy ‘Keno’ Walsh * – handsome and experienced gay male stripper. 21-32. His show opening Chippendale-esque performance for the Buffalo ladies bookends the beginning of the show nicely. Will double in other roles. Will sing in the songs ‘Scrap’ and ‘Let It Go.’

Susan Hershey, Joanie Lish, Dolores (doubles as Molly MacGregor, Malcolm’s aged ailing mother). Ages: 20-60. May double in other roles. May sing in Woman’s World, The Goods, and Let It Go.

Reg Willoughby (union leader), Tony Giordano (club owner), Marty, Gary. Ages: 20-50. May double in other roles. May sing in the songs ‘Scrap’ and ‘Let It Go.’

Callbacks are scheduled for Tuesday June 10th but this could change to a later date in the week. Callbacks are by invitation only.

Schedule your Audition here.  After scheduling your audition you MUST send a resume and headshot to productions@georgetownpalace.com 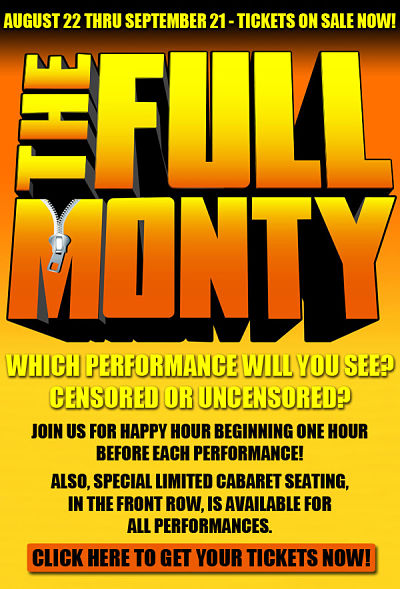