The Fantasticks
by Fredericksburg Theater Company

Auditions for FTC's production of The Fantasticks will be held Tuesday and Wednesday March  18th and 19th at 7pm at The Steve W. Shepherd Theater located at 1668 Hwy. 87s. All roles are available. Please prepare one song that best showcases your vocal ability. A CD player and pianist will be provided. Cold readings will follow vocal auditions. Attendance at both audition days is not mandatory.

Performances for The Fantasticks are Thursday, Friday, Saturday and Sunday August 7th, 8th, 9th 10th, 2014. Attendance at crunch week rehearsal, August 3rd-6th and all performances is mandatory. This production is being directed by Jeryl Hoover.

Additional information can be found on the theater website at or contact the FTC office at or via phone at 830-997-3588.

The Fantasticks, written by Harvey Schmidt and Tom Jones, tells an allegorical story concerning two neighboring fathers who trick their children, Luisa and Matt, into falling in love by pretending to feud. The fathers hire traveling actors to stage a mock abduction, so that Matt can heroically seem to save Luisa, ending the supposed feud. When the children discover the deception, they reject the arranged love match and separate. Each then gains disillusioning experiences of the real world. They return to each other bruised but enlightened, and they renew their vows of love with more maturity.

THE ACTOR (HENRY)  An aging, over-the-top Thespian who specializes in reciting Shakespeare, he is a commedia clown; his world is the stage and he knows no other reality.  Male, minimum age 35  Speaking Role

THE BOY (MATT)  An innocent, young man who is searching for love and adventure. A bright guy, but naive and even foolish at times, approaching situations with a false bravado. Must have range of acting skills from naiveté to mature acceptance of harsh realities. Male, minimum age 18 Range: A2 - G4 Light, lyrical baritone

THE BOY'S FATHER (HUCKLEBEE)  A former boisterous navy man and meticulous gardener who fakes a fight with Bellomy in hopes of getting their children to fall in love.  Male, minimum age 40  Range: A2 - F#4 Baritone, requires singing characterization rather than "beautiful" voice

THE GIRL (LUISA)  A button-maker's young and pretty daughter, she is a romantic idealist who falls in love with Matt. She is naive, yet honest and tender. Must have range of acting skills from extreme naiveté to mature acceptance of harsh realities.  Female, minimum age 16  Range: B3 - C6  Light, facile coloratura soprano with strong lower range

THE GIRL'S FATHER (BELLOMY) A fastidious button-maker and also a picky gardener who fakes a fight with Hucklebee in hopes of getting their children together.  Male, minimum age 40  Range: A2 - F#4  Baritone, requires singing characterization rather than "beautiful" voice

THE MAN WHO DIES (MORTIMER) Henry's goofy sidekick and another former actor who specializes in stage deaths. A commedia clown, his world is the stage and he does not live in reality.  Male, minimum age 21 Speaking Role

THE MUTE  A speechless presence who watches, acts as the wall, and deals with props; the "invisible" stage assistant. Should be able to easily assist in the story or fade into the background unnoticed.  Male or Female, minimum age 18  Pantomime Role

THE NARRATOR (EL GALLO)  A rakish, handsome, sophisticated gallant and narrator of the show. He aids the performers in orchestrating the story. Must have range of acting skills from light charm to darker manipulation. Male, minimum age 25  Range: Ab2 - G4 Dramatic baritone w/strong upper range

Please contact the FTC office at 830-997-3588 or fbgtheaterco@verizon.net with questions or for additional information. 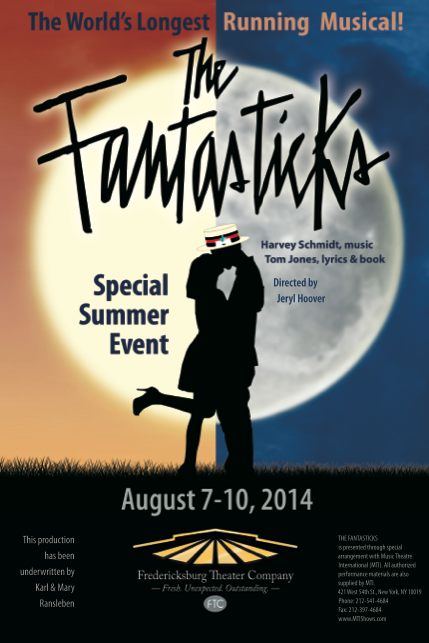